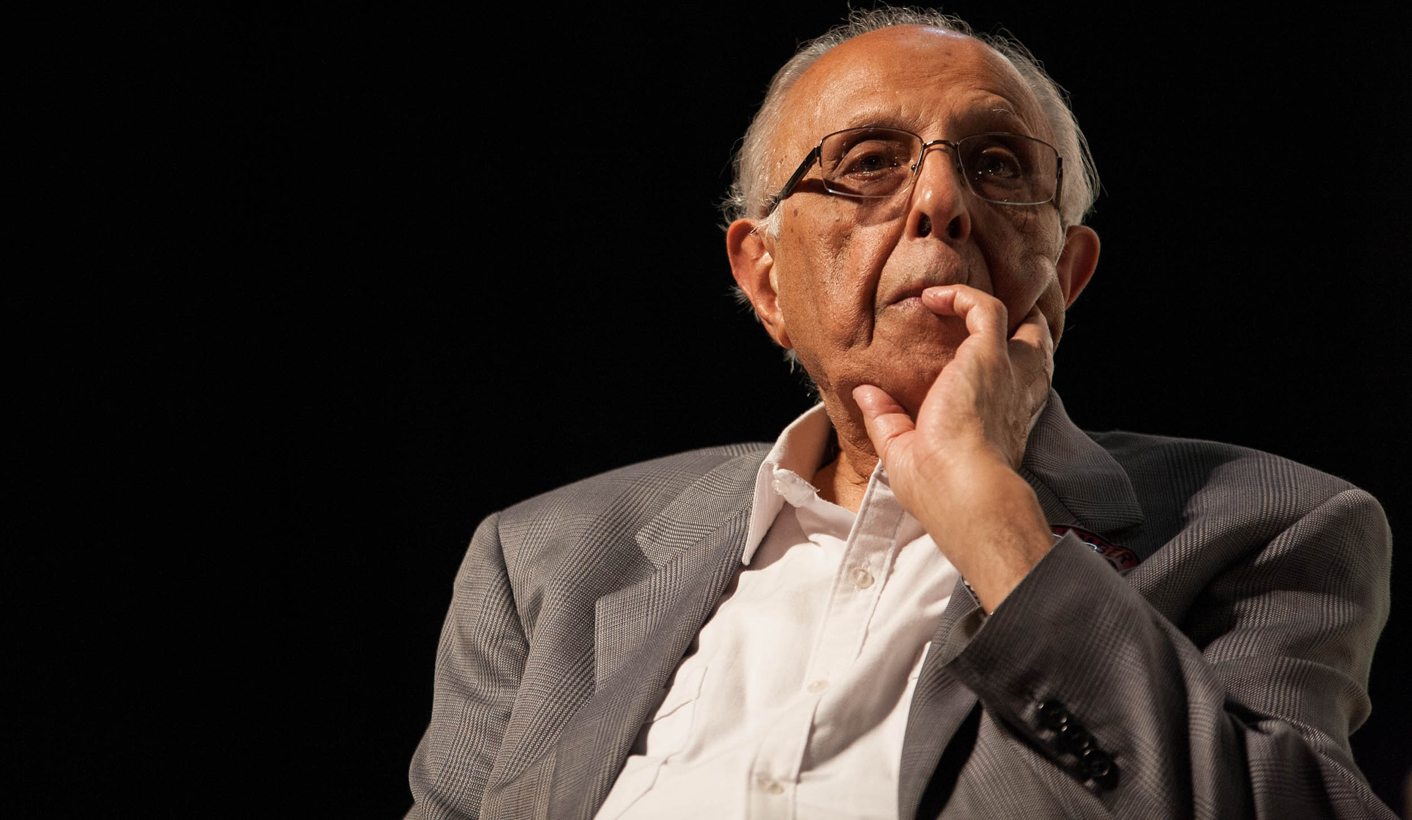 “I’m at peace, really,” Ahmed Kathrada said in a Daily Maverick interview in October 2014 on the 25th anniversary of his release from prison. Was he at peace with the world at the time of his passing? There are painful truths that we as a nation must face. Kathrada, 87, was deeply disturbed about the political situation in South Africa and certainly in the final year of his life, he made this patently clear. In bidding farewell to this gentle giant and stalwart of the liberation struggle, South Africa will celebrate an iconic life and his lifelong commitment to the fight for human rights. But we must acknowledge that the country he sacrificed his life for is now under an onslaught that troubled him greatly. By RANJENI MUNUSAMY.

Kathrada’s last public engagement was the commemoration of Nelson Mandela’s release from Victor Verster in February. It was apt that his last public duty was to honour South Africa’s founding father and the man he saw as “my elder brother, my mentor, my leader”.

During his stay in Cape Town, he fell ill, possibly from a stomach bug. He returned to Johannesburg where he became weaker due to dehydration. He was hospitalised and underwent medical tests. It was then that the blood clots on his brain were discovered and emergency surgery scheduled.

Kathrada had been unsteady on his feet for some time and had experienced dizzy spells. His loved ones assumed it was due to the aging process, which Kathrada himself refused to acknowledge. He prided himself on his good health and general wellbeing. When I mentioned in a piece I wrote about him that he shuffled when he walked, he informed his doctor about this and asked how it could be corrected. Despite his advanced age and hardships he faced during his 26-year imprisonment, he was not on any medication and kept fit through regular walks with his wife Barbara Hogan at the Sea Point promenade when they were in Cape Town or at Zoo Lake when in Johannesburg.

When Kathrada regained consciousness after his brain surgery, one of the first things he asked was, “What’s in the news?” He also remarked that his hospital ward reminded him of Robben Island. This gave hope that he would make a full recovery because he his favourite things were already on his mind.

Kathrada was hooked on the news. He could not break the habit developed on Robben Island of getting up at dawn and in the early hours, would soak up the news from various sources, including this publication. The news blackout he and his fellow prisoners experienced on Robben Island gave them a special appreciation for it. For this reason, Kathrada would read newspapers from front to back.

Despite being the place of his torment, Kathrada had a special love for Robben Island. Even while remembering their horrendous experiences there, he spoke nostalgically of the brotherhood that he and his comrades developed. Their survival and triumph of the human spirit had a lot to do with their mutual support and comradeship.

Mandela spoke of this at the time of Walter Sisulu’s death:

“We shared the joy of living, and the pain. Together we shared ideas, forged common commitments. We walked side by side through the valley of death, nursing each other’s bruises, holding each other up when our steps faltered. Together we savoured the taste of freedom!”

At Mandela’s funeral, Kathrada said: “I don’t consider him my friend. He was my older brother.”

Kathrada missed that camaraderie during his 27 years of freedom.

Photo: Ahmed Kathrada with the author on Robben Island.

Barbara Hogan was his comrade first after they were both released from prison. “We struck a relationship and it is still there,” was the way Kathrada described their deep and enviable bond.

Kathrada’s closest and dearest friend was Laloo “Isu” Chiba, and their bond was cemented during their long incarceration on Robben Island. A special moment in time occurred during a memorial service for Mandela hosted by the Ahmed Kathrada Foundation in Lenasia. Kathrada and Chiba sat on the stage chatting about their times together on the Island and recalling fond memories of Mandela. They chided each other about their recollections of incidents, buried deep in their memories. They made each other laugh about the times they outsmarted the prison warders and the days of hope and change.

Kathrada and Chiba remained joined in activism and comradeship till the very end. Their last campaigns together were in support of Finance Minister Pravin Gordhan in November when he was to be charged by the Hawks for corruption. Interviewed at the time, Kathrada said those who were hounding Gordhan were people “who have never seen the struggle” and were opportunists.

Kathrada and Chiba were also signatories to the document submitted to the ANC by over 100 struggle veterans, raising their concern about the situation in the organisation and the downward spiral of the country under President Jacob Zuma’s leadership. Kathrada was the first signatory on the Save South Africa pledge calling for Zuma to step down.

But most poignant was the letter Kathrada wrote to Zuma after the Constitutional Court judgement on Nkandla. It was the day Kathrada decided to break with tradition not to speak out publicly against ANC leaders.

“I did not speak out against Nkandla although I thought it wrong to have spent public money for any President’s private comfort. I did not speak out though I felt it grossly insulting when my President is called a ‘thief’ or a ‘rapist’; or when he is accused of being ‘under the influence of the Guptas’. I believed that the NEC would have dealt with this as the collective leadership of the ANC.

“This might be technically correct but in my view it is against the best traditions of our movement. My concern was amplified when it emerged that the Deputy Finance Minister reported that he was offered the Finance Minister post by members of the Gupta family. The people’s interest must at all times remain supreme,” Kathrada wrote.

He advised Zuma to consider stepping down.

“To paraphrase the famous MK slogan of the time, ‘There comes a time in the life of every nation when it must chose to submit or fight’. Today I appeal to our President to submit to the will of the people and resign.”

As Kathrada’s life slipped away in the early hours of Tuesday morning, he was unaware of the coming explosion in South Africa as the president engages in the next act of sabotage of the country. It is at least courteous of Zuma to accede to Kathrada’s wishes not to attend and speak at his funeral. That would have entailed hypocrisy and disrespect that Kathrada did not deserve.

What Kathrada did deserve was to enjoy his golden years, watching the country he fought for flourish and preserve the ideals he and his comrades fought for. He did not get that happy ending. But he did live an incredible life of public service, was surrounded by people who loved and cherished him, stood true to his principles, and died with his legacy and heroism intact.

Thank you for your life, your love and for the memories Uncle Kathy. DM