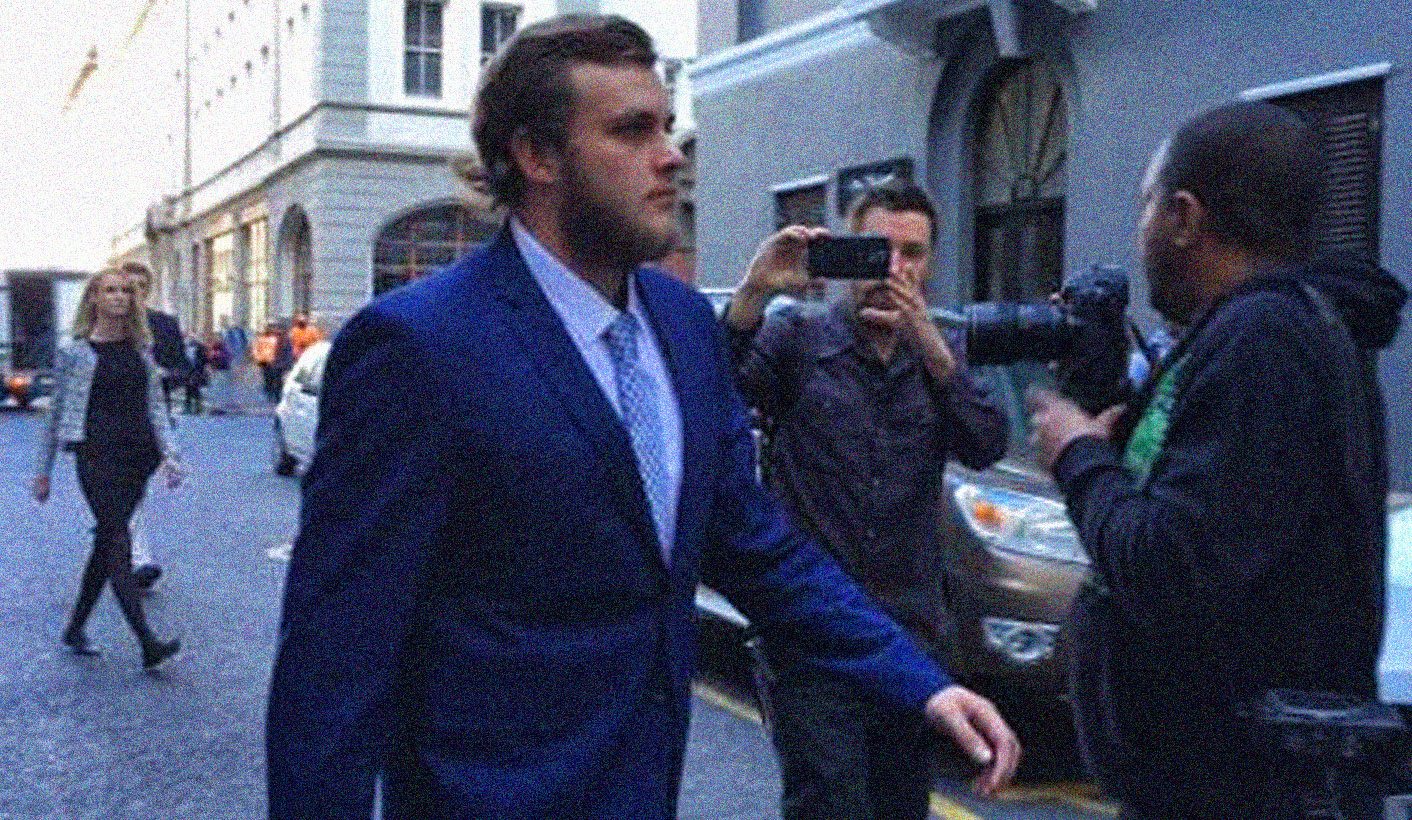 This week, the case of one of South Africa’s most gruesome family murders finally reached the Western Cape High Court – though not for long. In the dock is 21-year-old Henri van Breda, potential heir of a vast family fortune, accused of the murder of his parents and older brother, and the attempted murder of his surviving sister Marli. It took police almost 18 months to get a case against Van Breda together, but those impatient for justice will have to wait a little longer. By REBECCA DAVIS.

“This guy who killed his family, is he now going to prison?” asked a middle-aged woman outside the Western Cape High Court on Monday, concisely summarising public opinion about the likely outcome of the Van Breda murder case. In South Africa, however, the wheels of justice grind exceedingly slow. Nobody is close to going to prison yet.

The story is by now well known, as evidenced by the court presence of journalists from as far afield as the UK and Australia on Monday. In the early hours of January 27, 2015, three members of the Van Breda family were slain in their own home: 54-year-old father Martin, 55-year-old mother Teresa, and 22-year-old brother Rudi. Two were left alive: 16-year-old sister Marli, who suffered severe head trauma and a severed jugular – and Henri, who sustained only superficial injuries.

Henri van Breda is now on trial for three counts of murder, one count of attempted murder and one count of attempting to obstruct justice. With his trial officially set to start on Monday, the day brought procedural delays as a result of an application from Media24 to livestream the trial, and ultimately a postponement due to the defence’s argument that they had not yet received some missing information from the state.

Van Breda entered the court clean-shaven in a suit on Monday afternoon. He listened impassively to the discussion between lawyers and Judge Siraj Desai about a postponement, and did not smile at the judge’s attempts at humour. Van Breda was not asked to plead, and nodded silently when informed that his bail was extended to April 24. The sole insight into his state of mind was provided by his lawyer’s off-the-cuff comment: “If there’s one person in this court who wishes to have his say… it’s my client.”

In court were relatives of the Van Breda family, who left speedily after proceedings were adjourned, and declined to address the media.

When the trial resumes in April, the court will interrogate Henri van Breda’s apparent defence: that he, too, was a victim that night. Van Breda is set to claim that an unknown assailant used an axe and a knife to cut down Rudi, Martin, Teresa and Marli, before throwing the axe at Henri and knocking him unconscious.

With no signs of a forced entry at the Van Bredas’ exclusive wine estate home, Henri’s legal team will have their work cut out for them. Yet they have pulled off unlikely defences in the past: representing Henri is Pieter Botha, a member of the team that saw the successful acquittal of Shrien Dewani in 2015.

In the state’s corner is another formidable legal mind, however, in the shape of prosecutor Susan Galloway. Galloway secured convictions in another recent family murder case: the 2013 killing of Clovelly artist Rosemary Theron by her daughter and her daughter’s boyfriend.

Presiding over the trial is a judge who is no stranger to the limelight: Judge Siraj Desai, said to have been the ANC’s favoured – though unsuccessful – pick for Public Protector. It was Judge Desai who put away Taliep Petersen’s widow Najwa for the musician’s contract killing in 2007.

Public interest in the case has been high from the start. Family murders generally attract attention for their particularly cruel and tragic dimensions. Add to that wealthy white protagonists seemingly living a charmed life; one obvious suspect, and then an inexplicable delay…

The question of why it took police a year and a half to marshall the investigation against Henri van Breda is one that the trial will hopefully solve. As months passed after the crime had been committed, public frustration mounted with every story of the remaining Van Breda son continuing to live an ostensibly normal life: attending cooking school, acquiring a new girlfriend who described Henri as “the love of her life”, being photographed on beaches in postures of apparent relaxation.

Some suggested that a black man in the same position would have found himself in a cell long beforehand. The official line was that the police and the NPA needed to get a bulletproof case together after humiliation in other high-profile trials, like Dewani’s. Meanwhile, Van Breda’s aunt protested his innocence, describing Henri to YOU magazine as “a lovely child who could never do something like this”. She also denied persistent media reports that Henri had a drug problem. His blood was reportedly not tested for drugs directly after the murders – another mysterious aspect on which the trial may shed some light.

It was only in June 2016 that Van Breda handed himself over to police, under advice that arrest was imminent. Explaining the state’s case in September last year, the NPA’s Eric Ntabazalila said: “We know that the accused inflicted some artificial wounds on himself and provided some false information to the police.” Ntabazalila also confirmed that DNA found on the scene belonged to Henri.

The indictment further states that a loud argument was heard coming from the Van Breda home on the night of the murders, and that Henri van Breda conducted a Google search for emergency numbers at 04.27, but only called for help some three hours later. A leaked recording of his emergency call became the public subject of morbid fascination, with Van Breda seeming to giggle while reporting the deaths of his family members.

The NPA has said that it has 141 potential witnesses who it may call during the trial, and that Xhosa interpreters will be required. The first witness will be the first cop to arrive on the scene. Henri’s sister Marli van Breda, who reportedly cannot remember anything from the night of the axe murders, is on the list.

The judge has already indicated that Marli van Breda is to be treated with special sensitivity during the trial. A Monday ruling that media outlets could film portions of the trial – which has been subsequently suspended for appeal – specifically excluded any parts involving Marli.

The NPA’s Galloway also indicated on Monday that the state was feeling queasy about the prospect of footage being broadcast when it came to potential witnesses. She said it would be necessary for the state to consult with each witness on their list to ascertain whether they had objections to having their faces or voices captured.

It may be the case that the broadcast of the Oscar Pistorius trial – at the time hailed as a victory for open justice – has made potential witnesses more nervous about undergoing the same fate. The NPA has long struggled to attract trial witnesses as it is, and the prospect of undergoing such wide public exposure may increase reluctance to testify in cases such as these.

Judge Desai pointed out, however, that his ruling to allow the trial’s broadcast was not “the word of God”, and could be amended whenever necessary. The judge has yet to give his reasons for granting this access, and when he does, the ruling will be appealed. Even if the judge’s decision is upheld, however, there will be limits to what is shown. It is highly unlikely that visuals of testimony from Henri van Breda would be permitted, for instance.

When the trial eventually commences at the end of April, at stake is not just the freedom or incarceration of Henri van Breda, but also the fate of his parents’ vast fortune. One of the first precepts of South African law taught to students may find application in this case: Die bloedige hand erf nie (the bloody hand cannot inherit). DM