Victory for transgender learner in Limpopo a long time coming? 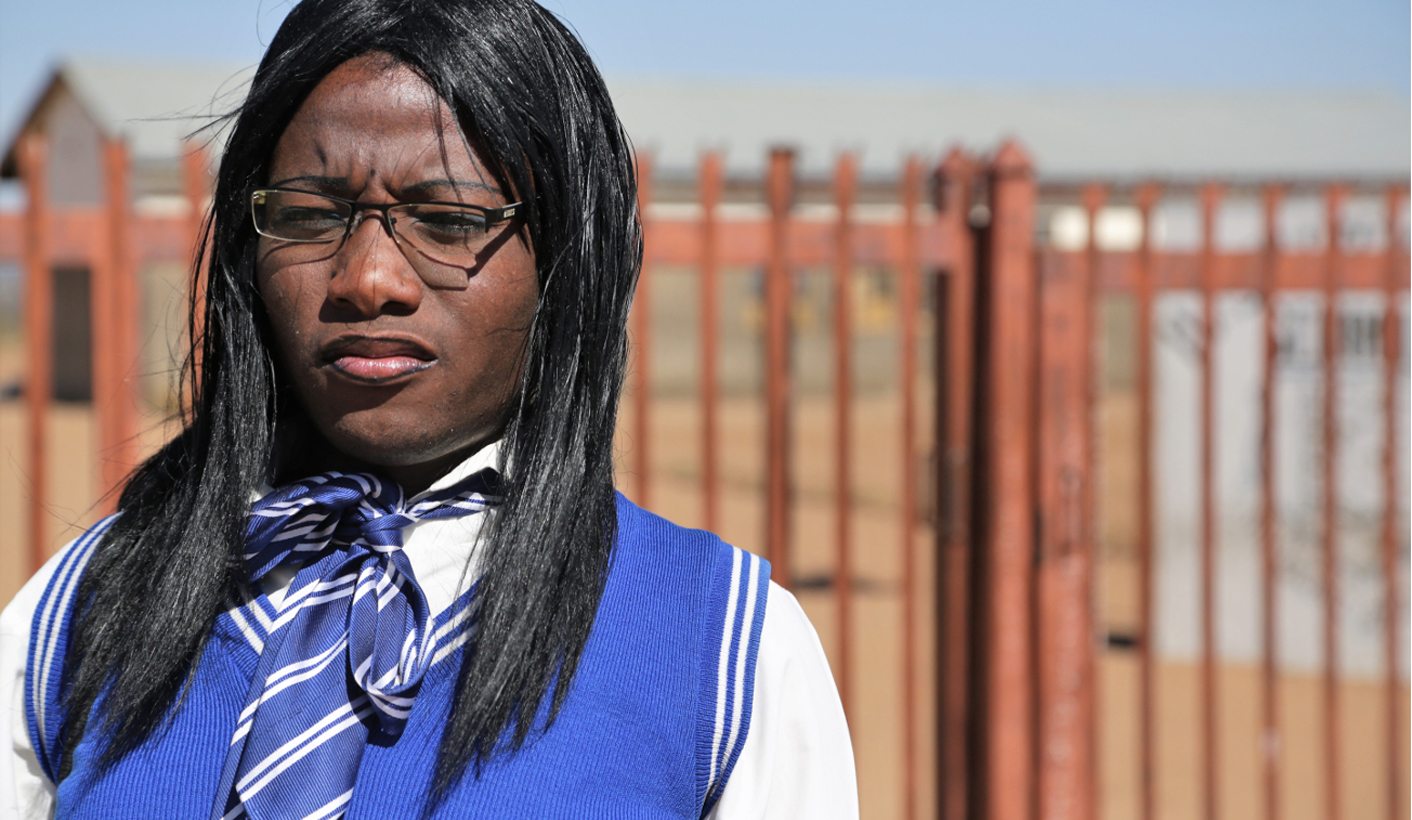 A landmark ruling unfolded last week when the Seshego Magistrate’s Court ordered the Limpopo Department of Education to pay R60,000 in personal compensation to Nare Mphela, a transgender woman from Ga-Matlala village. The case, which was officially brought to the court by the South African Human Rights Commission on November 14, 2016, is hailed as a triumph for LGBTIQ+ rights in South Africa. However, the story has its roots as far back as 2014, with Mphela only now, emerging from her bureaucratic purgatory. By KELLYN BOTHA.

The ordeal began when Mphela began facing severe discrimination for her gender identity from the school principal, KF Manamela, who, according to her, instructed her friends to stop referring to her as their “sister”; told them to provoke and harass her in the school toilets; as well as to grab her crotch “and find out what is there”. Manamela was further said to have forbidden Mphela from singing hymns and would employ corporal punishment (illegal since 1997) in order to discipline her.

In an effort to end the abuse, Mphela approached the Advice Office in Ga-Matlala near her school. The office directed her to Limpopo LGBTI Proudly Out, a local advocacy organisation. Mphela also approached the Limpopo branch of the South African Human Rights Commission (SAHRC), who directed her to the Seshego Magistrate’s Court in Polokwane. However, the Equality Court had never dealt with any case pertaining to the Promotion of Equality and Prevention of Unfair Discrimination Act (The Equality Act) since its inception in 2000. Thus the clerk on duty had no knowledge of how to process Mphela’s case.

Such events are not unique to Mphela, as any transgender person would know. South Africa’s Constitution is one of the most progressive in the world regarding the protection of LGBTIQ+ persons’ rights, and multiple laws, such as the Equality Act, serve to supplement this. However, this does not always translate into action from the various levels of the state.

In July 2014, Limpopo LGBTI Proudly Out was in contact with Iranti-org, a Johannesburg based media-advocacy organisation which focuses specifically on the rights of lesbians, transgender and intersex people.

According to Jabulani Pereira, Director at Iranti-org, “Iranti contacted Webber Wentzel Attorneys, our pro bono legal support, and requested their assistance in representing Nare at the equality court. We also documented her story, along with other learners who faced similar forms of discrimination.”

One week later, representatives from Iranti-org had travelled to meet with Limpopo LGBTI Proudly Out and Mphela. The two groups went to the Seshego Magistrate’s court to press for action. When approached by the activists, Mphela’s principal denied any wrongdoing, claiming that all “homosexuals” were welcome at his school. Homosexuality and being transgender are two different issues – sexual orientation and gender identity.

After years of mounting pressure, the SAHRC approached the court in November 2016 and it seems that the Seshego Equality Court did not agree with Manamela’s assertions about his school’s openness.

On March 10 2017, the courts sided with the SAHRC’s recommendations, having been, “satisfied with the credibility of the complainant’s testimony”. This, according to SAHRC spokesperson, Gail Smith, was based on the testimony of an expert witness who argued that Mphela faced severe discrimination and trauma, which the court found to be “incontestable”.

For Iranti-org’s Pereira, “the delays in the justice support are not helpful for cases that require urgent and immediate remedies. Nare’s rights were violated for almost three years. Due to the trauma she suffered she was not able to complete her matric”.

Mphela now lives in Johannesburg, having been unable to matriculate. She struggles with the cost of living and still spends time at home in Limpopo where she can be supported. This situation seems set to change though.

The Limpopo Department of Education, was found to have failed to react sufficiently to the situation, and was ordered to pay R60,000 to Mphela in damages; R20,000 for her psychological expenses; and a further R20,000 for her to complete her education. Manamela was found guilty of breaching the Equality Act and was ordered to attend gender sensitivity training in what must be considered a very progressive move.

“We don’t always want to go the litigation route as it costs the state, but the state is negligent and transphobic and leaves us with little room other than litigation,” says Pereira. Doubtless, R100,000 plus the costs of maintaining this legal battle could have been well spent by the Limpopo Department of Education in other areas. Limpopo Province is listed as having around 932 schools with only pit-toilets, and hundreds of schools across the region lack electricity or proper learning materials. The fact that the department would dedicate its efforts to defending a principal who advocated for harassing a young woman in his school’s toilets, rather than working on upgrading those facilities to allow safe and inclusive sanitation for all, is rather telling.

This historic victory has organisations such as the SAHRC and Iranti-org celebrating the reaffirmation of LGBTIQ+ rights in South Africa, which are all too often ignored by the state and its citizens.

“(The Equality Act) is a beautiful piece of legislation, which says if you come to me and call me names because of your ignorance, I should have a remedy. But then the reality comes which is something someone like Nare had to face,” said Tshegofatso Phala of Webber Wentzel Attorneys during a speech at a 2015 Transgender Day Of Remembrance memorial. Phala, who has represented Iranti-org’s clients for a number of years, knows all too well the fate of many LGBTIQ+ South Africans. The youth are particularly vulnerable.

“We are still working on a case in the North West Province of a young lesbian learner who was sexually molested by her teacher because of her sexual orientation,” says Pereira, who notes that discrimination within schools is common. In the very same week that Mphela won her case, The Herald reported that 38 young women at a school in Mdantsane, Eastern Cape, were forced by their principle to “out” themselves to their peers and parents as punishment for their sexual orientation. The principal, allegedly stating that how she dealt with “problems” at her school was not a matter for the media to look into, will perhaps find the judiciary looking onto her methods. After this historic SAHRC hearing, those in charge of educating the next generation of South Africans may find themselves forced to finally comply with the laws of the land.

With so many instances of open discrimination ongoing, and cases like Nare Mphela’s taking years to gain traction, many LGBTIQ+ students are in a race against time. It is yet to be seen whether the precedent set in Limpopo will have an effect on such cases in other provinces, but at least for one young woman, the finish line of this particular marathon is finally drawing near.

While this is a victory to be celebrated, we also know that Mphela’s personal well being, and the well being of countless other vulnerable South Africans, is far from guaranteed. Unicef has officially made a call for “legislation that is non-discriminatory, a change in social norms and greater awareness and access to knowledge” on issues of gender-diversity in schools as “critical components of an enabling environment to protect LGBT children and parents from discrimination”.

Changing the mindset of the teachers and peers of transgender and other LGBTIQ+ youth, facilitating a revamp of our sex-ed and uniform policies to be more inclusive, are only the first (yet most crucial) steps toward accepting transgender students, and realising that they, like everyone else, merely want to live and learn in peace. It will take some real political will power to roll out the required changes. But when the alternative is being forced to do damage control by the courts, it surely will be worth the effort. DM

Kellyn Botha is a writer and media reporter for Iranti-org in Johannesburg. Her fight for trans rights in South Africa started in 2015, with a belief that media representation of transgender issues is the key to raising awareness. As with all people though, she is more than her gender, and follows politics, scientific discoveries, and series like Game of Thrones very intently.