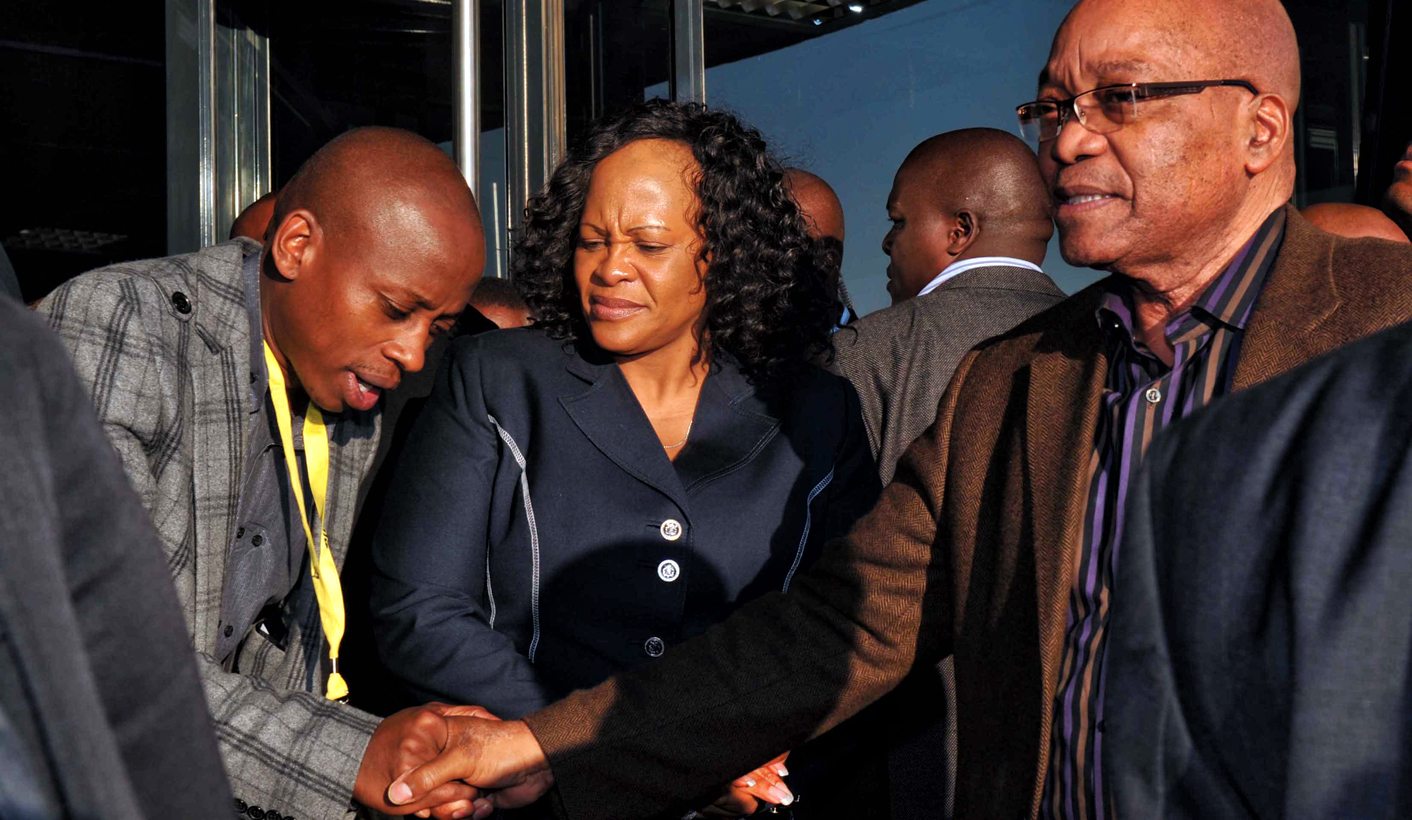 As we get closer to the ANC’s December leadership conference, one of the many questions awaiting an answer is whether the party will in fact simply survive the event. Even the National Executive Committee (NEC) itself has indicated that it’s worried the party could split, should it go to that conference divided. This means that the respect of the ANC rules, and its very own constitution, are vital. But now it appears another line of division has risen, based on several people’s refusal to obey the very same rules. One of them is the newly elected leader of the ANC in the Nelson Mandela Bay Metro Municipality, Andile Lungisa. The other is the man backing him, President Jacob Zuma. If the centre does not hold, it could be by his design. By STEPHEN GROOTES.

For some people, the job of leading the Nelson Mandela Bay region of the ANC is not worth fighting about. It is not in power, and it has shown no indication of knowing how to reclaim power from the DA-led coalition in that metro since it lost it in August 2016. It has also been riven with discord. For over a decade there have been many power struggles in that section of the ANC, which have led to a number of direct interventions by Luthuli House.

So then, the election of Lungisa to the post should have been relatively uncontroversial.

Except that he broke the ANC rules by contesting the position in the first place. At its 2012 Mangaung Conference, the party decided that if you belong to a higher structure, you cannot at the same time belong to a lower structure. In other words, if you belong to the NEC, you cannot contest the position of provincial leader. It’s presumably designed to stop the instability that this kind of thing could bring. You could imagine someone speaking on behalf of a province, contradicting a decision made by the NEC that they are a part of – it is a conflict of interest that is asking for trouble.

Lungisa was formally told to back off, by ANC Secretary-General Gwede Mantashe no less. Lungisa refused – and was less than polite in the process. Mantashe eventually referred the matter to the NEC, and for disciplinary action.

In the meantime, Lungisa was elected to the post. And no less a personage than Zuma himself rocked up, unexpectedly, to congratulate him personally, and very publicly. Then, in a fascinating turn of events, the top six, the national leaders of the ANC, decided Lungisa should step down, inferring they believed he had broken party rules. Now it is up to the ANC in the Eastern Cape to make sure he does so. They have given him an ultimatum. He has until Thursday to resign.

From his side, Lungisa is arguing that the rules have been incorrectly interpreted. He also says that only the NEC can order him to step down, and that while he would respect that decision, they have not yet done so.

There is a lot to ponder here. It seems unlikely in the extreme that Lungisa, a mere regional chair of the ANC, would dare so publicly to defy the top six without support from Zuma. No one else would be able to protect him. Which in turn means that Zuma may be relying on his own support in the NEC to protect Lungisa. But why?

Lungisa is not someone with a wonderful track record. As deputy leader of the ANC Youth League during the time of the Gloriously Revolutionary Julius Malema, he was completely humiliated, and forced to say “sorry” for his running of the National Youth Development Agency. The CEO of the agency at the time, Steve Ngobeni, was not forced to make any such apology. And just to be spiteful, Malema allowed the media in to watch the moment, before ushering them out again.

Just last year fraud charges against Lungisa were dropped in relation to a concert that was supposed to feature R. Kelly. And at the moment, Lungisa still faces an assault charge after being caught on video picking up a glass water pitcher and hitting a DA councillor over the head with it, in the Nelson Mandela Bay council chamber last year.

(Incidentally, the mere fact that he’s facing a criminal charge over that incident could also be a reason why his decision to stand for this position was not in keeping with the ANC’s rule book that was adopted in Mangaung.)

It is possible that Lungisa could argue that Mantashe has interpreted the rules in a way designed to keep him out of this race. But, Mantashe has precedent on his side, and will be able to point to other people who were not allowed to run for positions because of this rule.

So, in the end, it appears to come down to one thing, and one thing alone: a serious division at the top of the ANC’s national structure. Lungisa, surely, is not challenging Mantashe without the active backing of Zuma. Curiously, in the top six national leadership, it appears Zuma does not have the upper hand any more.

The interpretation used to be that the top six leaders were split down the middle. The dividing issue was, as it so often is in the ANC, Pravin Gordhan. Three members of the top six had indicated their support for him in different ways – Mantashe, Zweli Mkhize and Deputy President Cyril Ramaphosa. Jessie Duarte and Baleka Mbete appeared to back Zuma. This balance appears to have changed. And while it’s hard to know without being a fly on the wall in their meeting, indications are that it is Mbete who has switched. Two weeks ago the Sunday Independent ran a story claiming Mbete had told Zuma that he could not appoint Brian Molefe as Finance Minister. If that is correct, Mbete may well be moving away from Zuma.

This is classic “second-termism”: as Zuma’s power begins to wane, so people start to move away from him. In Mbete’s case she appears to believe she could be the next leader of the ANC, and if Zuma is not supporting her, she has no use in supporting him any more. In other words, she is beginning to look past Zuma, to her own future. (She, of course, is not the only one doing so.)

But there are much bigger implications for the ANC here. The start of the year was marked by the Social Development Minister Bathabile Dlamini’s appalling behaviour. The ANC Women’s League, which she heads, was not far behind her. Dlamini and her merry band have publicly campaigned for Nkosazana Dlamini-Zuma, in clear defiance of ANC rules. There is so far little or no evidence of any change in Minister Dlamini’s disdain for the 105-year-old organisation’s rules.

The ANC has had to deal with disobedience from its leagues in the past. But how can what is happening with Lungisa be anything other than the leader of the party sanctioning the breaking of rules, the same way he is supporting his former wife’s candidacy through unflinching backing of a strong candidate for SA’s worst minister ever? But what happens when the president of the ANC breaks its rules and encourages others to do so, too? If Zuma breaks the rules, or sanctions rule-breaking, what is there to stop Mantashe or Ramaphosa from doing the same? What would happen if the NEC took a decision and Mantashe, or Ramaphosa, refused to implement it?

Would that not be the end of the ANC as a rules-based organisation? And if its members don’t obey the rules, and it is powerless to stop them from doing that, then we would have to ask another question – is it really a single political party at all? Or just a collection of people who wear clothes bearing the same colours?

During times of contestation within organisations, the rules by which the various parties play start to become more and more important. If there is no acceptance of what the rules are, and who will enforce them, then the risks of the fight getting dirty start to rise. When the stakes are high, the temptation to play dirty can be overwhelming. Not everyone will play like this. Only those willing to risk the very fabric of a political party would do it. Surely the only reason that Zuma would do what he is doing here is to influence the result of the leadership election in December. And if he is prepared to go to these lengths just in a regional election, it would suggest that to get his ex-wife elected leader, he would go very far indeed.

This would pose another question to his opponents: if Zuma is prepared to break the rules of the ANC, are the others too? And if they are not, would they actually stand a chance? DM