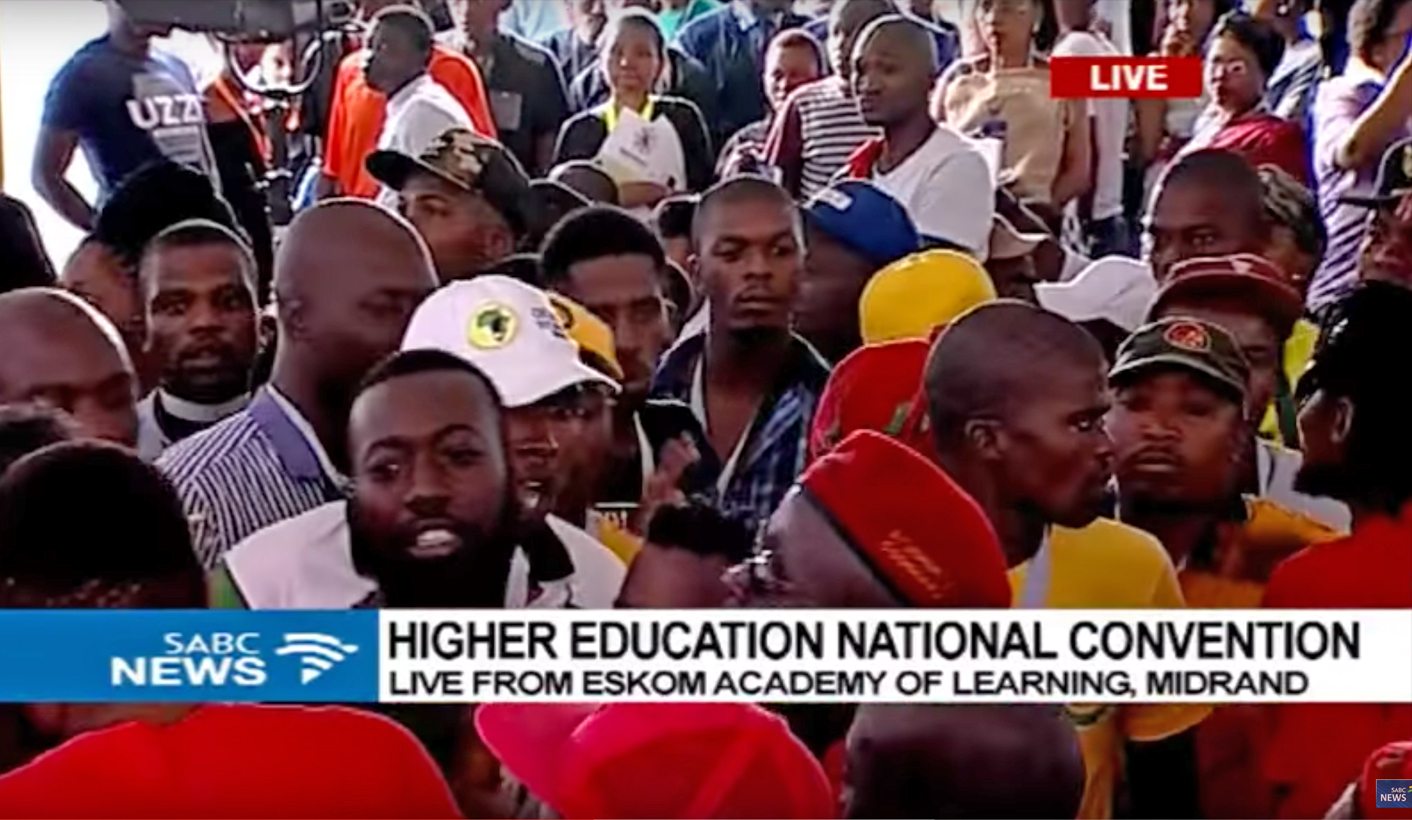 The Higher Education National Convention was a gamble. To solve the crisis at universities, it planned to bring different student groups together with civil society, the state and varsity leaders. The same groups have been fighting each other for two years. The gamble turned into a brawl. By GREG NICOLSON.

Bishop Malusi Mpumlwana is proud of the National Education Crisis Forum’s work. Over the last year, the forum has visited all nine provinces to hold meetings with students and university staff. It was convened by former Deputy Chief Justice Dikgang Moseneke and nine high-profile co-convenors. Some of the meetings were tense and Mpumlwana was worried students would fight, but they always managed to find consensus on a way forward.

“All the meetings we’ve had before have been successful because there’s been no media,” laughed Mpumlwana on Sunday. He has worked closely with the forum and is also general secretary of the South African Council of Churches. An intervention at the University of Pretoria, after predominantly black student groups clashed with Afriforum Youth, even led to black and white parents working together.

The Higher Education National Convention was meant to take the provincial dialogues forward and find policy proposals to address key issues at universities, which have seen repeated protests in recent years as students demand, among other things, free, quality, decolonised education. Instead, the convention was marred by chaos and violence – and ended before engagements begun.

“It was a huge disappointment,” said Mpumlwana, noting the convention was just a part of the forum’s work, while also saying he hoped it would be a “landmark”.

Through its provincial engagements, the forum knew about many of the complex issues facing students and the higher education sector. Delegates this weekend were meant to split into work streams to discuss and create policy proposals on the most important issues.

Student leaders from across the country descended on Midrand for the event. It was also attended by Higher Education and Training Minister Blade Nzimande, members of other government departments, and the National Prosecuting Authority – a key player on the issue after so many students have been criminally charged.

The convention was chaotic from the start. Afriforum Youth, which is ideologically opposed to what many student groups stand for, was invited because the forum wanted all parties at the table and because of the previous success in engaging the group in Pretoria. Many delegates were against Afriforum attending and the youth group was pressured to leave. Then there was a fight after Busisiwe Gumede from #FeesMustFall tried to address the conference. Although she is a well-known student leader, delegates claimed the movement isn’t a recognised group. Almost all student groups were involved in the chaos.

University of Witwatersrand Vice Chancellor Adam Habib had to speak because Universities of South Africa CEO Ahmed Bawa had to travel to an event in KwaZulu-Natal. Students interrupted his speech, claiming Habib was not on the programme, and that there was a commitment from organisers not to let any university vice chancellors address the convention.

When Higher Education and Training Minister Blade Nzimande tried to deliver his address, the situation turned violent – or, to be accurate, more violent. The Economic Freedom Fighters Student Command (EFFSC) disrupted his speech and ANC-aligned organisations in the Progressive Youth Alliance (PYA) sought to stop them. As the minister was whisked away, the different groups threw bottles of water and chairs at each other, with other delegates caught in the crossfire. The confrontation was drawn-out and some students even took off their belts to hit others.

“The whole thing was kind of a manifestation of the politics of our country,” said Mpumlwana. He thought students might be more open-minded, but they appeared to mimic the actions of the leaders in their political parties, he said.

The convenors closed the convention, which was meant to go on for two days, because it would not work if students could not listen to each other; there was a risk of continued violence, particularly with delegates staying overnight; and because invited students had been chased away. Many students wanted to continue, claimed Mpumlwana.

EFFSC spokesperson Naledi Chirwa said the party knew the convention would try to legitimise the work of the ANC. They went there to get answers from Nzimande. EFF students wanted the minister to commit to uplifting suspensions and expulsions of students who have been part of protests, to make worker insourcing a priority, and to commit to a solution on free education.

The issue of students facing disciplinary hearings, expulsions and criminal charges for engaging in protests highlights the divisions at the convention. Mpumlwana said many student leaders he had engaged with last year are no longer enrolled at varsities because they are facing consequences for leading protests. Many other students have been financially excluded. Unanimously, student groups say they don’t want further “talk shops”. Some students on Saturday wanted to use the platform, in front of the media and the minister, to raise what they see as the most pressing issues.

“We were outnumbered from the beginning. We didn’t retaliate that much. We just did what they were doing to us,” said Chirwa. She said three EFFSC members were taken to hospital after the clashes; they have since been discharged. “It actually exposed the PYA a lot. They’re willing to guard [the minister] at the cost of students,” she said. “When it comes to choosing the ANC or the students of South Africa they will choose the ANC.”

Wits Vice Chancellor Adam Habib, who is often criticised by protest leaders at his varsity, on Sunday said the convenors of the Higher Education National Convention should be congratulated for trying to bring stakeholders together. “If we’re going to go on with this crisis, we may as well close shop,” said Habib.

He said there was one political party in particular that, like all others, agreed in its opening speeches to listen to different opinions but then decided to disrupt the conference. “If you’re not prepared to engage in good faith in the negotiations, why do you do this?” he asked. “Why was this initiative deliberately imploded by a party? Do they not want to resolve this? Is there no commitment to finding a solution to fees, decolonisation, insourcing?” Habib asked whether the instigators might have an ulterior motive and whether, in future, discussions might have to exclude certain groups.

Daily Maverick couldn’t reach leaders of the South African Congress of Students (Sasco) on Sunday. The group has been reported as playing a key part in the conflict. Despite rare instances of unity, this weekend’s fight reflects ongoing divisions among student groups. Most groups are fighting for the same broad principles, but students have been split largely because of their allegiances to different political parties, as well as in-fighting among students for prominence and power.

Mpumlwana remained positive. The National Education Crisis Forum had focused specifically on universities for this event but has plans to work on broader education issues across the country. The convention was meant to provide a way forward on the university crisis and the forum will meet this week to discuss its plans. He suggested that the forum’s engagements might have contributed to the low level of protests seen so far on campuses in 2017 (although there have been demonstrations that have closed universities such as University of Fort Hare recently).

“There is enough energy to go forward. The question is, how?” asked Mpumlwana. DM