Analysis: Don’t let anyone tell you football doesn’t have a prevailing culture of misogyny 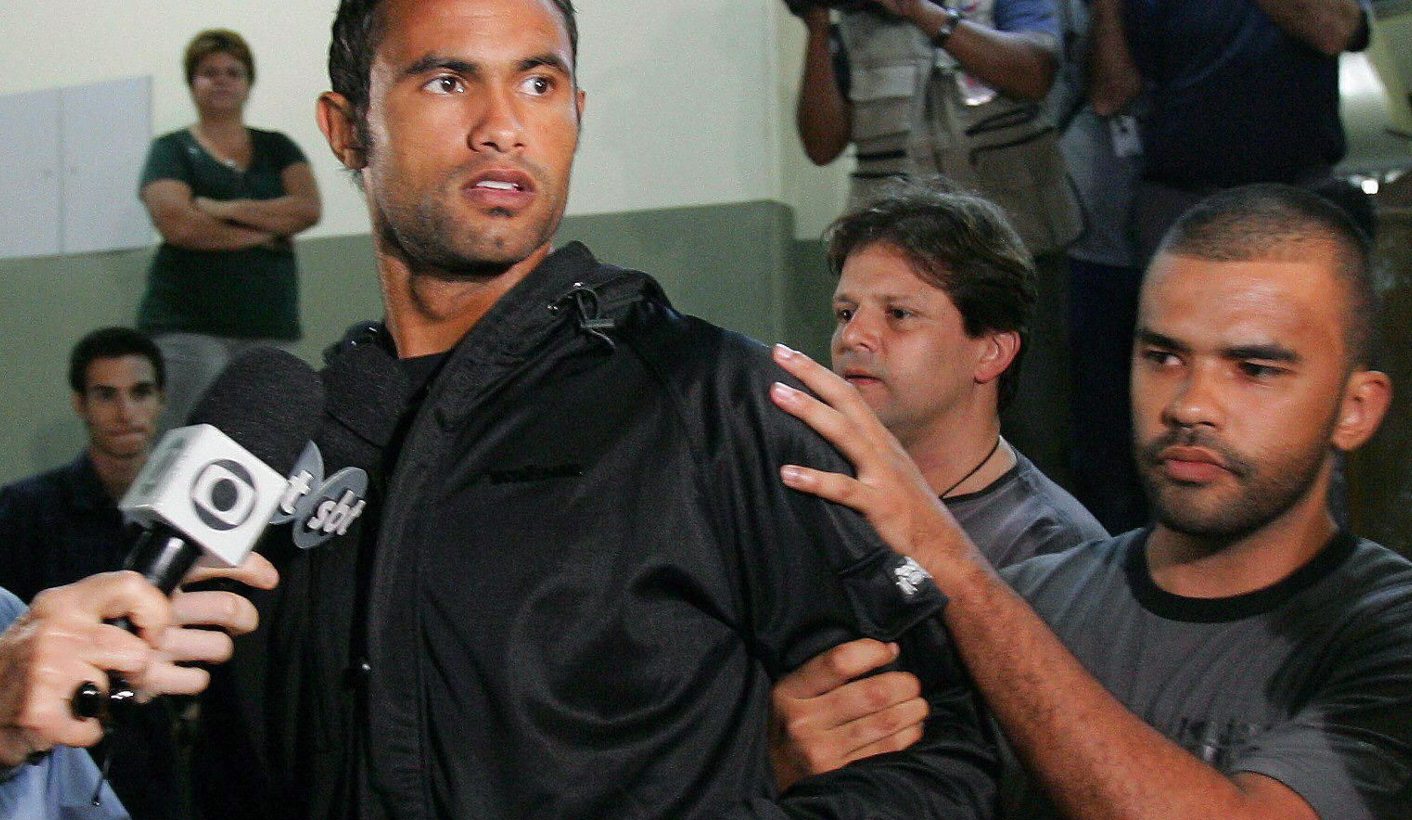 Brazilian soccer player Bruno Fernandes waltzed back into the privilege of being a professional sportsman after getting out of a 22-year murder sentence on a technicality this week. While the move was widely condemned, decisions like this highlight the prevailing culture in football that allows misogyny to trump respect for women. By ANTOINETTE MULLER.

If you had not seen the pictures and the videos of the Bruno Fernandes press conference where he was unveiled as a new signing for Boa Esporte in Brazil, you might very well have thought that it was one of those “fake news” stories.

So grotesquely unbelievable are its details: Fernandes was released from prison this week, seven years into a 22-year sentence for his part in the 2010 murder of Eliza Samudio, his lover.

He was also found guilty of hiding the body and the kidnapping of her baby son. At the time of sentencing in 2013, he admitted to knowing that Samudio had been strangled – and that her remains were fed to his pet Rottweilers — but he denied that he had anything to do with ordering her killing. Two of Fernandes’ friends were also charged with murder. You can read all the horrific details of the crime from the BBC’s report, if you can still stomach the thought.

But, you get the gist. An extremely violent act was committed against a woman and one of the men convicted of it has been let out of jail on a legal technicality. Yes, that’s right. It’s not that Fernandes has “done the crime and served the time”, he got off on a technicality after having served a fraction of the time he was sentenced to. According to reports, his legal team petitioned for habeas corpus, a document that reports an unlawful detention or imprisonment before a court. The petition was filed because Brazil’s courts failed to rule on his appeal for years.

It sounds unbelievable. And here’s the thing: the reality of violence committed against women across the world is often grotesquely unbelievable.

But it’s not so much a flaky justice system that is problematic. It is that within days of worming his way out of that system, Fernandes has returned to his privileged life as a professional sportsman, because playing sport professionally is a privilege first and a job second which makes the debate around rehabilitation and re-integration of criminals back into society an incredibly complicated issue.

In his book Crime, Shame and Reintegration, published in 1989, Australian criminologist John Braithwaite puts forth a theoretical model for dealing with crime at the individual and community levels.

According to Braithwaite, high rates of predatory crime in a society are indicative of the failure to shame those acts labelled as criminal. Braithwaite argues that the breakdown of community ties in modern urban communities has meant that perpetrators of crime are not made to feel ashamed of their actions, and thus continue victimising others without remorse.

Ah. Shame, such a nuanced word when used out of its South Africanism chasm. Fernandes has, from what we know, shown little or no remorse – in fact there are reports that he was celebrating with champagne when he heard that he would be released. He has not been shamed – he continued to enjoy the privilege of training in prison. In fact, he’s not be shamed, he’s been borderline adulated.

Fernandes even said that he has been made to “feel very welcome” in Varginha, the city where the club is based and that he still has one eye on making the Brazil national team because “one should always keep dreaming”.

Dreaming is something Eliza Samudio will never be able to do again, but hey, at least Fernandes now gets to focus on football, right?

The club that signed him has been widely condemned in Brazil with protests from fans, rights groups and three sponsors withdrawing themselves from association with the club. Those sponsors should be lauded, but we should not ignore the greater debate about the culture that resulted in a club thinking they could just go around signing a man who holds women in such contempt. And, before you jump on the #NotAllMen or #NotAllFootballClubs bandwagon, we know. But, the internet is full and free and if that is your immediate response, this piece on Slate explaining why it’s completely unhelpful for the discourse is a good start.

Back to Fernandes. At his unveiling, Fernandes only wanted to comment on “matters related to football”. This staggering disrespect and disregard for a woman’s life was jarring.

But it’s perhaps not all that surprising. Football has long had an extremely uncomfortable relationship with prevailing sexism and misogyny – where vile “jokes” are passed off as “just banter” and women are told to “lighten up” if they dare speak out.

This culture of disrespect has for years fostered an environment where men like Fernandes not only have agency, but are celebrated. And don’t you dare be a “humourless” old hag who tries to speak out or challenge this dangerous, violent and oppressive culture.

Any attempts to try and excuse this by claiming that “it was ages ago” is naïve, foolish and disrespectful. Just ask Chelsea’s former medic who, during her time at the club, was continuously taunted by chants of “get your tits out for the lads”. But it’s just banter, right?

The problem with “just banter” is that it’s merely a smokescreen for hiding prejudice. It allows a culture which oppresses women to thrive. Hell, even Fifa themselves perpetuated this “banter” when good old Sepp Blatter wrote in the governing body’s official magazine that football only become complicated once you try to explain the offside rule to your wife. Hilarious!

It’s perhaps no surprise then that through all of this, Fifa – that bastion of morality that governs the sport – has been quiet as a mouse. Lest we forget, after the 2009 Confederations Cup, they told the Brazilian Football Association off for wearing messages in which they expressed their love for Jesus.

Publicising religion? Oh no, we cannot have that. Allowing a man convicted of a grotesque act of violence against a woman in a time where violence against women is at an all-time high? Best we keep quiet, just in case we rock the boat.

Sport, whether we like it or not, has always been a mirror for society. The issues that prevail in our everyday existence are often confounded in the games we love. Sometimes, sport at least tries to pretend to take the moral high-ground. In this case, it’s enabled the worst of it. DM