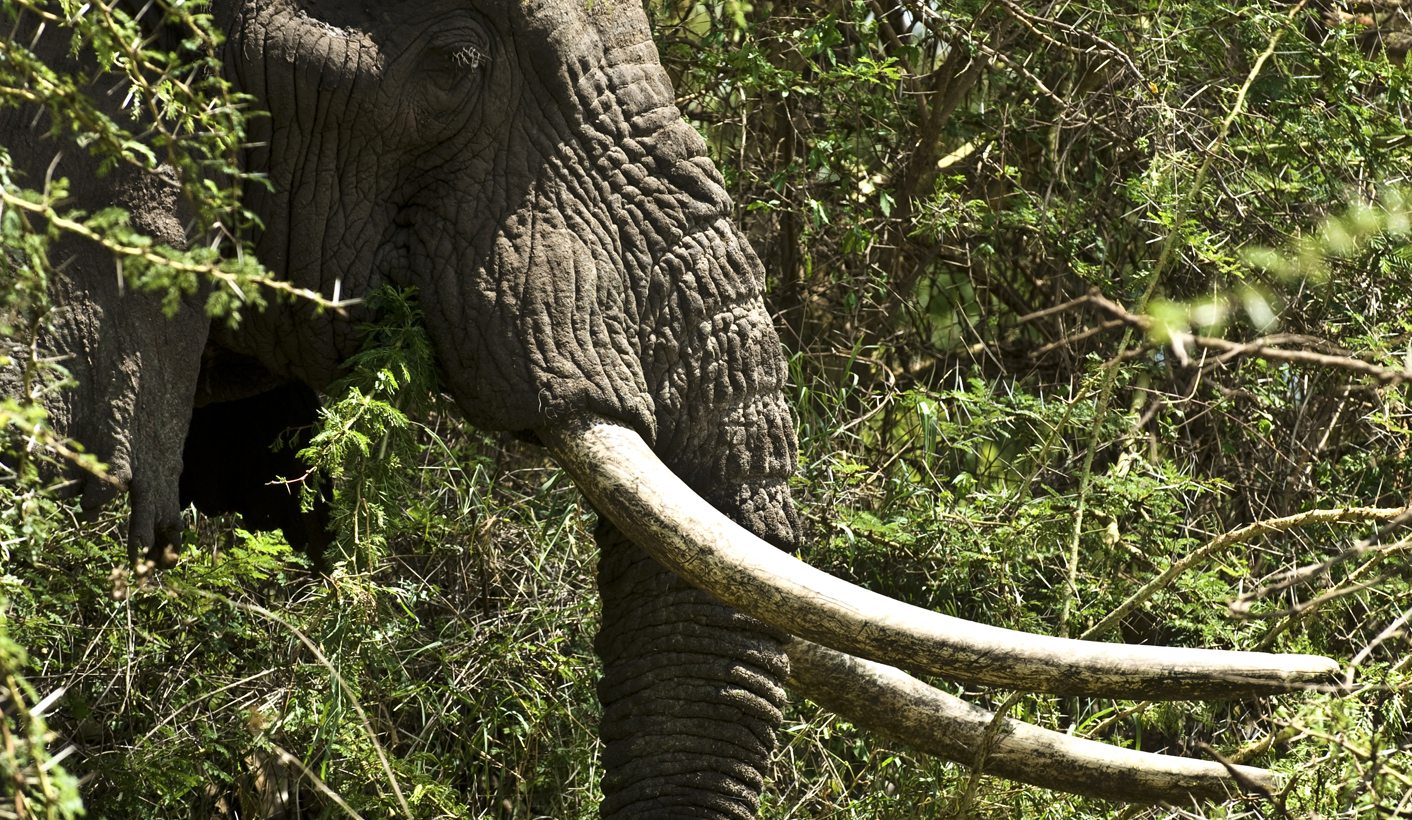 Synecdoce is an interesting but seldom used word of Greek origin which means a part of some object or action which represents the whole. An example is the application by the Timbavati reserve to hunt a super tusker and its approval by Kruger National Park. There are only about 25 to 30 such elephants left in the world. That single request, in a long list of other animals to be hunted, embodies a much bigger story. By DON PINNOCK.

The private reserves of the Lowveld alongside Kruger Park are redolent of ancient Africa: spectacular unfenced vistas of bushveld and wild animals with minimal human interference. In the early 1990s the Kruger National Park and the Associated Private Nature Reserves (APNR) – which consists of Timbavati, Klaserie, Balule and Umbabat – began the process of dismantling the fences between each other, allowing animals to retrace their ancient east/west migration routes.

Within these reserves are many privately owned luxury lodges which cater for tourists who pay high rates to experience some of the most exciting wild animal sightings in the world. What’s not well known, especially by guests attracted by beautiful marketing websites, is that a reserve like Timbavati is, in terms of its income, primarily a hunting destination, this accounting for 61% of the reserve’s income against tourism’s 17%.

There are reasons. Many of the APNR blocks that were not bought as peaceful bushveld refuges were originally prime hunting areas. As lodge development became increasingly profitable, association between owners and with Kruger Park became a rational move. But to support reserve integration and the widening of tourist experience, SanParks allowed them hunting rights, even though some of the animals would undoubtedly be from the national park.

So hunting is perfectly legal: the reserve applies to Mpumalanga or Limpopo’s conservation agencies and, after Kruger Park oversight, its allocation generally gets approved with just a few amendments.

Of course, tourism and hunting are not good bedfellows, so over the years the reserves have managed to keep them apart, with almost zero public visual crossover. Tourists, who pay top prices to stay at Timbavati’s lodges plus a R215 a person a day conservation fee (which nets many millions of rand), would not know that many of the animals they come to see and photograph fall to hunters’ guns when they are out of sight.

For those unaware of this arrangement, the latest hunting quota application by Timbavati, Klaserie, Balule and Umbabat might come as a shock. It includes 193 buffalo (including 76 classic bulls), 34 elephants (including a super tusker), two white rhinos, two lions, two leopards (despite a national moratorium on hunting leopards), 29 kudu, 5,162 impala, 25 waterbuck, 10 hippos and a hyena, a giraffe, a zebra and a wildebeest. It also requests the capture of 30 white rhino and eight hippos. As in the past, many of the carcasses will probably go to Timbavati’s abattoir, which presently sells impala and buffalo meat.

Photo: Timbavati reserve alongside the Kruger Park has applied to hunt an iconic elephant despite their rarity. Hunting iconic animals in the private reserves alongside Kruger Park may have repercussions in the tourist industry.

Game counts for the APNR show that, apart from blue wildebeest, zebra and giraffe, all other animal numbers went down between 2016 and 2017 – elephants by 142 and buffalo by 1,797. Apart from deferring the rhino quota and a warning that there is a moratorium on leopard hunting, Kruger signed off on the quota, but appears to have become uneasy with APNR’s non-compliance with hunting protocols.

In correspondence with the APNR in January and again in March, Kruger conservation management complained that the APNR hunting protocol had not been signed and warned that no further requests would be considered until this is done. Its officials sounded irritated:

“The fact that hunting and live-animal off-take is the major income for APNR should have ensured the highest due diligence to get any protocols concluded and formally signed within and between entity structure, but this is still not the case. This simply demonstrates ineffective governance and decision-making between entities within the APNR system.

“KNP… will not support future off-takes unless the necessary co-operative agreements and the associated hunting/animal off-take protocols have been formalised.”

If quotas are an indication, Timbavati – which is congruent with Kruger – is the prime hunting area. And while shooting animals to raise money is accepted by APNR owners in general – they have high anti-poaching overheads – its scale now sits uncomfortably with a number of them who see hunting an iconic trophy bull elephant and rhino as a bridge too far. This may explain why some of them have not signed the hunting protocol called for by Kruger.

Information about why Timbavati wished to hunt an iconic tusker – over 50 years old with tusks in excess of 100 pounds – proved elusive. Lodge owners within the reserve said they didn’t want to be named or quoted because it would make their association difficult. One of the country’s top elephant specialists said he “is well known for his objection to hunting trophy bulls” but couldn’t be named because he still does work for Timbavati.

Timbavati Warden Bryan Havemann said approval to hunt the bull had not yet been obtained from the provincial authorities. He said “the ability to find such a bull that will fit all the criteria could take many years and even though it may be put on the quota, the chance of finding such an elephant remains remote”.

Dr Michelle Henley, a long-term elephant researcher in the APNR, said that between 2004 and 2014, 40 different large tuskers (80 pounds or more tusk weight) had been seen to enter and leave the APNR, though many of them had only been sighted once and never again. That’s an average of four trophy tuskers a year.

APNR chairman, James Campbell, said hunting quotas were up to individual reserves within the association, but that hunting took place “within the context of an environment of high quality ecotourism and sustainable coexistence”. He noted that “the overwhelming numbers of the proposed off-take are for impala [5,162] with the majority of the meat going to the employees of the reserves as an important source of protein with no financial gain to the landowners”. A number of lodge owners, however, said they served impala (among other wild animals) to guests.

The issue, according to some conservationists, is not so much about hunting Kruger animals that may wander across the fenceless boundary – or hunting at all – but going for a super tusker. Elephant numbers in Africa are crashing, with around 30,000 poached a year. It’s only a matter of time before the tsunami hits Kruger Park. It may, indeed, have begun; since September 2015, more than 80 have been poached in the park – the highest in its history.

According to a source who asked not to be named, by targeting a trophy bull Timbavati is pushing towards an ethically flawed hunting economy. This is causing uneasiness between it and other reserves within the APNR:

“Timbavati is risking the co-operative strength of the APNR. Neighbouring reserves don’t follow the same line of thinking; they’re more tourist oriented. If they push this, they’ll be undoing a valuable history and risk alienating tourists. This could rebound on the many people in the APNR who rely on camera safaris and tourist goodwill. Landowners need to become more proactive about decisions like this,” the source said.

According to Dr Lucy Bates, an elephant researcher at Sussex University in the UK, poaching numbers in Kruger may be relatively low now, but a serious threat is imminent.

“South Africa cannot act in isolation, claiming that its elephant populations are not at risk,” she said. “They are at risk. Kruger is one of the last bastions of large-tusked bull elephants in the whole of Africa. South Africa should be duty-bound to protect and preserve these super tuskers and their genes for the benefit of the entire continent.

“Arguments that trophy hunting removes old males that are ‘past their prime’ and ‘no longer breeding’ are entirely false and deceptive in the case of elephant hunting. We know from long-term studies and genetic paternity tests that male elephants show a different pattern of reproductive output to most mammals. Large, older bulls are the most reproductively active. Bulls aged between 40 and 54 years are the most likely to sire calves.

“In my opinion, the very argument on which elephant trophy hunting is based is scientifically proven to be false. Carefully collected long-term scientific data clearly shows it cannot be justified. Hunting ‘trophy’ bull elephants absolutely does interfere with natural mating strategies and absolutely will reduce the biological fitness of the remaining population.”

According to Dr Vicki Fishlock, a scientist at Amboseli Trust for Elephants, a research and conservation organisation in Kenya, “Old and experienced individuals are crucial. They’re so much more than ‘a breeder’. By the time these animals reach this size, they’ve been part of social networks for five or six decades and have accumulated social and ecological experience that younger animals learn from.”

A comment by Lucy Bates underlines the problem these lodges could face if hunting of Kruger’s iconic animals becomes widely known:

“I first visited Timbavati on a family holiday that I arranged some 15 years ago. I had no idea then they hunted in the APNR, and if I had, I certainly wouldn’t have spent my or my parents’ money on staying in a lodge there.

“Since I learned they hunt, I’ve not paid to go back to Timbavati. I am sure I’m not the only tourist who would feel like this. Is hunting really that much more profitable than photo tourism that they continually risk alienating photo tourists? Or do they rely on the ignorance of these tourists? Both would be unwise.” DM

Main photo: There are only about 25 to 30 super tuskers in the world and all in Africa. (Don Pinnock)

How South Africa deconstructs the world