ISS Today: Dlamini-Zuma shuffles out of Addis – and into SA’s Cabinet? 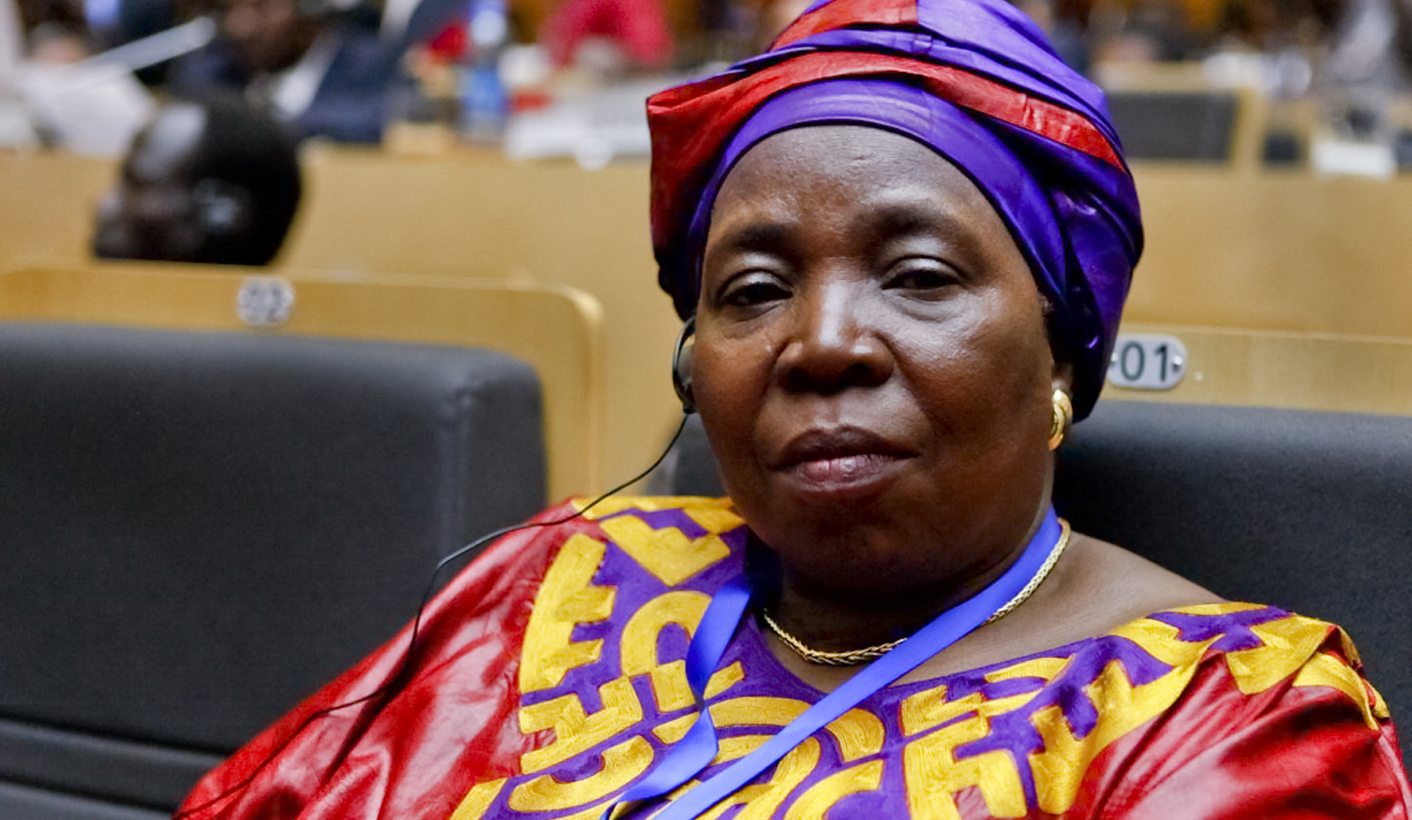 Nkosazana Dlamini-Zuma bid farewell to the AU last week. What does this mean for South Africa? By Liesl Louw-Vaudran for ISS TODAY.

Outgoing African Union (AU) Commission Chairperson Nkosazana Dlamini-Zuma has packed her bags and greeted staff at the AU headquarters in Addis Ababa. The farewell ceremony, on March 1, came just over a month after the election of her successor, Chad’s former prime minister, Moussa Faki, on January 31.

The handover to a new commission – with its chairperson, deputy chairperson and eight commissioners – typically takes three months. This was certainly the case in 2012, when Dlamini-Zuma was elected in July, and officially started work on October 1.

As noted by the Institute for Security Studies’ PSC Report, Smaïl Chergui, Commissioner for Peace and Security, was the only current commissioner who was re-elected for another mandate. Since Chergui won’t need a lengthy handover, he’ll be the only member of the old team when the new commission starts its work on March 15.

The other five commissions will see new faces, and two positions are yet to be filled at the next summit in July in Addis Ababa. The deputy chairperson, Ghanaian Thomas Kwesi Quartey, will replace Kenyan Erastus Mwencha as deputy chairperson.

The outgoing team, especially Dlamini-Zuma, is clearly eager to leave. As was the case with her election in 2012, the outgoing commissioners had overstayed their terms by six months given that heads of state were unable to agree on a new head during the July 2016 summit in Kigali.

Dlamini-Zuma’s legacy remains a mixed bag, and some AU Commission staff told ISS Today they are pleased to see her leave. The main criticism is that she was very often away from Addis Ababa, attending business related to the ruling African National Congress (ANC) in South Africa.

She is seen as one of the main contenders to take over from her ex-husband, President Jacob Zuma, as party leader in December 2017. Following general elections in 2019, she could then also become the president of South Africa – a job that she started campaigning for even prior to the end of her AU mandate.

Her ambition to lead South Africa was the object of much social media criticism from South Africans as she said goodbye to the AU staff. In a farewell message, an unusually smiling Dlamini-Zuma said she believes her legacy projects such as Agenda 2063 – a plan for a “peaceful and prosperous Africa” in decades to come – will live on and eventually bear fruit.

“As I take my final bow as AU chairperson, I am satisfied with the strong foundations in place for Africa’s success,” she states. Elsewhere, Dlamini-Zuma also last week said how much she enjoyed living in Ethiopia – the only country outside of South Africa where she wasn’t in exile.

Twitter can be a dangerous mode of communication, as Dlamini-Zuma with her just over 91,000 followers must have found out over the past four years. After her departure note, commentators didn’t hold back in their attacks. “You leave with famine and mass killings in #SouthSudan. For whose benefit are the so-called common African positions?” asked one critic. “The people of #Burundi will forever remember your inability to solve human rights abuses,” said another.

Others, however, praised her work as a champion of women’s rights. Her usual supporters, like her special envoy for women peace and security, the Senegalese Bineta Diop, and the head of the ANC Women’s League, Bathabile Dlamini, were present at a special farewell dinner for Dlamini-Zuma on the margins of the January AU Summit in Addis Ababa.

According to those present at the lavish ceremony, which included a film about Dlamini-Zuma’s good work at the AU, calls were made for “Dlamini-Zuma for president”. Bathabile Dlamini, who was criminally convicted for fraud before being appointed as South African Minister of Social Development, has since been embroiled in a scandal concerning the payment of social grants to 17-million South Africans, and there are persistent calls for her resignation. She might not turn out to be an asset to Dlamini-Zuma in her campaign for the presidency after all.

Commentators differ on whether her time at the AU will help Dlamini-Zuma in her bid to lead the ANC and the country. Being elevated to such a prestigious continental position does not always translate into political success back at home.

Last year, Dlamini-Zuma’s predecessor Jean Ping, former foreign minister of Gabon, ran for presidency in his home country. Despite uniting a number of heavyweights from the ruling party behind him, Ping lost against the incumbent Ali Bongo. Ironically, the organisation that he led for four years did next to nothing about his claims that the elections were rigged.

Dlamini-Zuma did express her concern in a statement and lamented the internet blackout during the elections in Gabon. The matter was placed on the agenda of the AU Peace and Security Council. But that was it.

Ivorian diplomat Amara Essy – the interim AU Commission Chairperson, who served from 2001 to 2003 – also ran in the last presidential elections in Côte d’Ivoire, but withdrew three weeks before the first round of voting on October 25, 2015.

The only other AUC chairperson – Alpha Oumar Konaré, who served from 2003 to 2008 – had already been president in Mali and wasn’t going to try again. He is now the AU High Representative for South Sudan.

Of those past AU chairpersons who tried to take up the most important position back in their home countries, none had the support of the current head of state. Institute for Security Studies consultant, Judith February, notes that Jacob Zuma has been “craftily doing the rounds” in provinces such as KwaZulu-Natal and Limpopo to make a case for Dlamini-Zuma to head the ANC.

Speculation has also been rife about a possible Cabinet reshuffle to replace the current Finance Minister, Pravin Gordhan, who is critical of corruption in government, with Dlamini-Zuma.

The opposition Congress of the People party alleged in January that Zuma might do this to get rid of Gordhan, and also to prepare Dlamini-Zuma to take over the ANC “and hopefully the country”. It is alleged that she will protect Zuma and family members from prosecution for corruption if she becomes president.

Dlamini-Zuma’s departure from the AU now makes it possible for her to be sworn in as an ANC Member of Parliament – and eventually to be appointed in Cabinet if Zuma wishes to do so.

Despite being heavily implicated in newly democratic South Africa’s first major corruption scandal in relation to the Sarafina II debacle, which raised serious concerns about her integrity, she has subsequently managed to steer clear of corruption scandals that have tainted the legacy of some of her fellow ANC cadres who rose to key positions in government, including Zuma.

Her silence on key issues, such as Mbeki’s AIDS denialism and the successive waves of xenophobic violence in South Africa, however, is a cause for concern.

There are fewer than 10 months left for Dlamini-Zuma to campaign for the ANC leadership. Reports about her failure to solve crises in Africa during her time at the AU have filtered through to a portion of the electorate in South Africa, but the images of Dlamini-Zuma greeting former US president Barack Obama, or German chancellor Angela Merkel, in Addis Ababa might end up carrying more weight. Some would argue that rubbing shoulders with the world’s great leaders is proof enough of being presidential material. DM