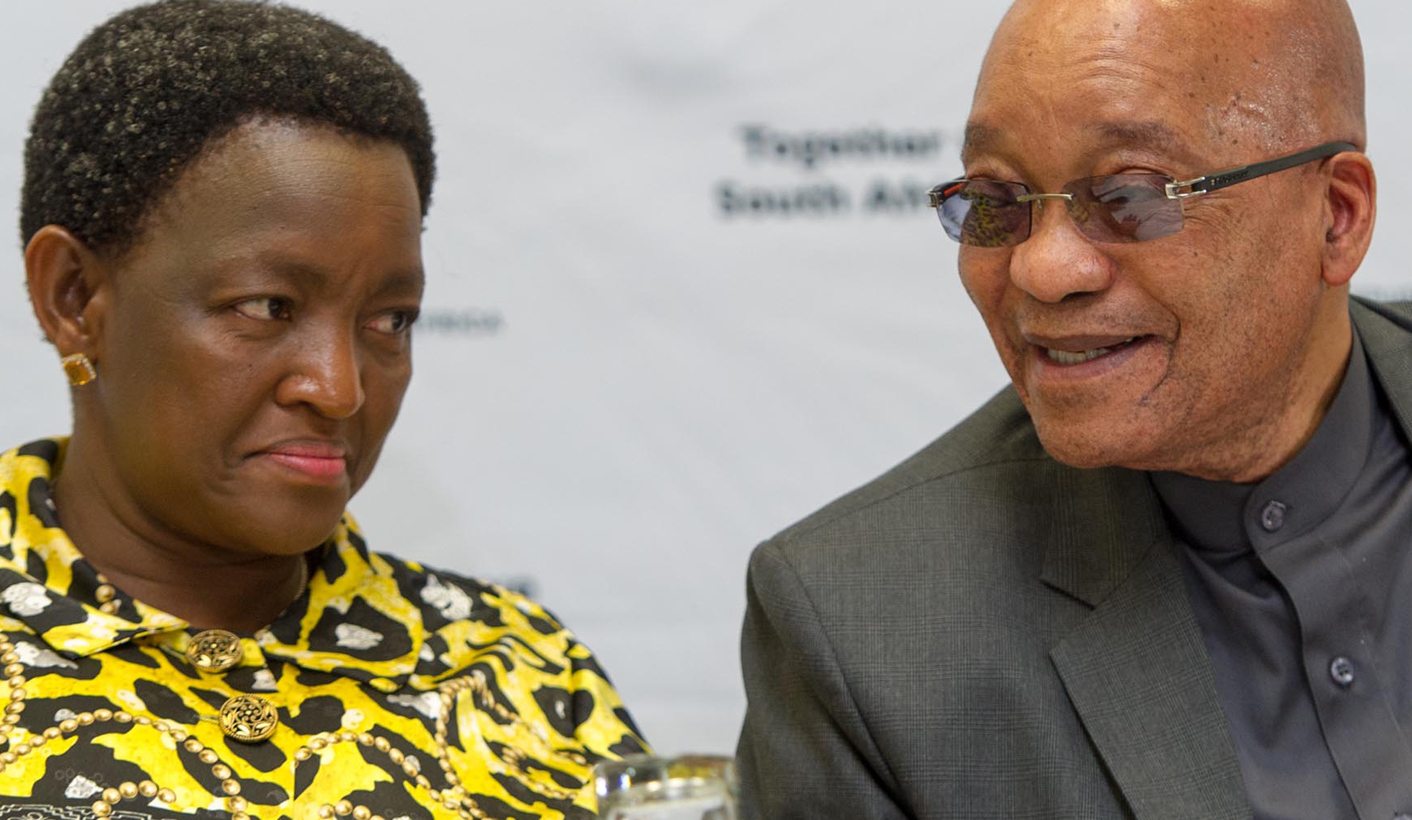 President Jacob Zuma, speaking from the sidelines at the 20th Indian Ocean RIM Association summit in Jakarta on Monday, “appealed” to Minister of Social Development Bathabile Dlamini and her human shield, Lumka Oliphant, not to “talk in public” or answer any questions before the April 1 payment of social grants to 17-million South Africans. His blackout order comes after a disastrous press conference on Sunday where Dlamini and Oliphant blamed the media and others who have “an agenda” for the crisis. On Monday, however, the minister told the SABC she took full responsibility for the crisis. Oh, and the department also announced it had “resolved” the issue of the new contract with CPS. By MARIANNE THAMM.

President Zuma’s comments after Sunday’s unseemly spectacle in Pretoria with Dlamini and Oliphant in lead roles and the media cast as evil villains in the Sassa crisis narrative are revealing and indicate that he ostensibly shares with Dlamini the opinion that government officials are not accountable, to citizens or the rule of law.

“People are going ahead and talking about the date. Others are calling for the minister to be fired, but the date has not come. It is somewhat worrying that people have preconceived ideas. Calm down and wait for the 1st,” said Zuma, adding, “It cannot be that on the 1st pensioners won’t get their pay [he meant grants but you know what we mean]. The country must not take this matter as if a problem has arisen. I would like to appeal to the minister. They should not talk in public and answer questions, but just work on work. Answering questions is not helping. People make a lot of speculation. The minister and spokesperson must stop. The less we talk the better.”

What the president seems not to realise is that the date is not the issue; it is incidental to the larger picture, while practically it is most certainly crucial to the 17-million recipients of social grants. The issues are, in fact, the lack of transparency, the deliberate violation of a Constitutional Court order, the brazen public lies and the repeated lack of respect towards Parliament and accountability regarding Sassa’s readiness to take over as paymaster of grants on April 1.

South Africans, the president fails to understand, have a constitutional right to know what deal is being negotiated (with taxpayers’ money) with CPS for the delivery of grants, what the exact nature and conditions of the new contract will be, whether it is sound in law and if there are any additional costs – yet to be signed off by Treasury. This is, after all, one of the biggest government tenders – worth R10-billion a month – which is why it appears so many vultures are circling the honey pot.

And let us not forget that Sassa has also still to explain its reported R1-billion in fruitless and wasted expenditure for the last financial year. This is a not-so-little matter Sassa officials managed to slither out of when accounting to Scopa last Tuesday before Minister Dlamini diverted attention by simply failing to pitch to answer questions about the legality of the proposed new contract with CPS.

The circus kept on rolling on Monday this week with Oliphant, who had earlier spoken fluent English during an interview with the SABC’s Leanne Manas, refusing to do so with 702’s Xolani Gwala. Gwala cut the interview short, telling Oliphant, who continued in Zulu, that she had “disrespect for the medium and there is nothing I can do about it”.

Oliphant, who is a prolific poster of selfies on Facebook – usually of herself lounging around pools or enjoying food and cocktails – deactivated her account after Sunday’s botched nationally televised press conference.

Later in the day Dlamini and Oliphant were warmly embraced by the cheers and applause of adoring supporters and clergy, one of whom announced, “we spray the blood of Jesus over this minister”, during an address to stakeholders in the ballroom of the Cape Sun hotel in Cape Town.

(There was no sign, apparently, of any pastors with Doom.)

And while earlier in the day Dlamini had emphatically told the SABC that she accepted “full responsibility” for the crisis, she seemed to have had a change of mind a short while later, telling stakeholders that it was the media who should be blamed. She particularly singled out white journalists who she said “have their own agenda”, while claiming black reporters “work diligently”.

Dlamini also further cancelled out her earlier apology, telling those gathered that she felt the nation was owed an apology but that Sassa was not actually to blame.

Meanwhile CPS/Net 1 CEO Serge Belamant announced that the company had agreed to a set of terms for the new contract with Sassa. Belamant told 702 that CPS and Sassa had agreed on commercial terms as well as “what we are going to do on behalf of Sassa in order for them to take in-house a number of technical processes which we currently perform”.

Questions over the legality of the new contract remain, as it was concluded without normal tender processes and without Treasury approval. Sassa will appear before the Constitutional Court on March 15 to reach an agreement on the new contract – this in response to an application by the Black Sash that the ConCourt play an oversight role rather than Minister Dlamini.

Sassa’s programme manager on Monday outlined some of the features that would be phased in with the new CPS contract and which include that recipients would not be able to make purchases with their cellphones, that purchases such as electricity would have to be done in person, that new Sassa cards to be issued after current cards expire in December would not be able to be used to buy alcohol, and that money lenders would not be able to deduct payments as the new cards would only operate on a fingerprint scan.

Later, Sassa General Manager for Legal Services, Busisiwe Mahlobogoana, confirmed that the agency had been advised by Advocates Nazeer Cassiem Mias Mostert in May 2016 to approach the Constitutional Court to report that Sassa would be unable to meet the seven deliverables as set out in the 2014 court order for the agency to take over as paymaster on April 1, 2017. It was an opinion that was, characteristically, simply ignored.

On Monday, Dlamini said she had only discovered in December last year that Sassa would be unable to act as paymaster, a statement which ranks as an alternative fact, as these were questions asked repeatedly in Parliament’s portfolio committee on social development as well as by opposition members from around June 2016.

ANC committee members as well as social development committee chair, Rosemary Capa, have attempted, at almost every briefing by the minister and Sassa officials, to shield them from these questions and from being held to account.

On Tuesday, however, should she opt to grace it with her presence, Dlamini will be alone in explaining the sequence of events (even though No 1 has urged her to avoid questions) – all of which are documented in paper trails – to Scopa, where she has been summoned to appear.

So far Scopa chair, Themba Godi, has not received any communication or confirmation that Dlamini will attend. The minister is in Cape Town as the urgent Cabinet meeting Minister in the Presidency, Jeff Radebe, referred to last week addressing the issue of social grants is due to take place.

The minister, should she appear, will do so without her accounting officer, Department of Social Welfare Director-General, Zane Dangor, who resigned last week. It is not known whether Sassa CEO Thokozani Magwaza has recovered from his illness which saw him skip last Tuesday’s Scopa meeting.

There are many further critical outstanding questions other than those related to the new CPS contract, however. These include the wasted expenditure and also why it was that a special advisory team appointed by the minister, and whose members headed up “work streams” with regard to the agency’s takeover of grants, appears to have been so spectacularly incompetent in the three years since the Constitutional Court ruling.

On Tuesday the nation will be focusing on committee room V454 where the Scopa hearing will take place at 09:00. DM