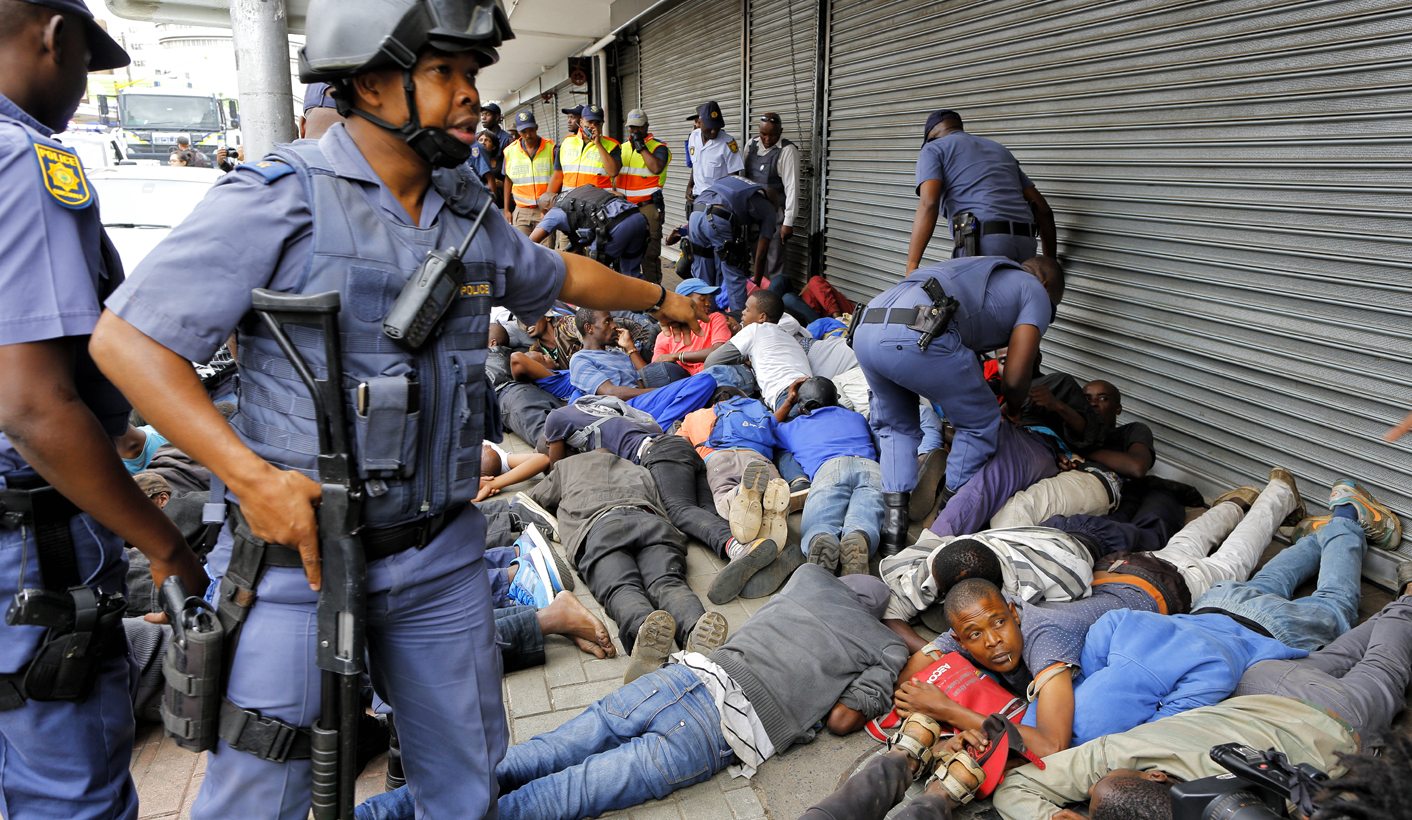 Government’s review of criminal justice legislation is considering the inclusion of “issues of state security and issues of national sovereignty” in bail procedures. This emerged in Sunday’s briefing by the justice, crime prevention and security cluster in the Cabinet. The review has come about at neck-breaking speed. It follows a meeting of the ministers and President Jacob Zuma, who during his visits last month to Nyanga, Cape Town, and Shoshanguve, Tshwane, was told by police that the current laws were not working for them because the courts released on bail those the SAPS arrested for crimes. By MARIANNE MERTEN.

President Jacob Zuma on Friday told the National House of Traditional Leaders that he had asked his security cluster ministers to revisit laws which police during his visits told him were not working for them.

“We (police) have done our best to arrest criminals, but the courts release them. What must we do? … Police were saying the manner laws are operating favours the perpetrators,” Zuma said of his interactions with the SAPS, adding that police highlighted the killing of witnesses that effectively scuppered their cases.

“That is democracy going too far, going overboard… It is known, why can’t we stop it?” Zuma told traditional leaders on Friday. “When we made laws we can’t pretend the laws are like the Ten Commandments, we can’t amend them. If they have weaknesses, let us change them.”

Zuma added that he had met the security cluster and told his ministers to “look at this and make the laws to help us eradicate crime… Let us change it so it favours victims. Police were saying the manner laws are operating favours the perpetrators.”

The president visited Nyanga on February 14 and Shoshanguve on February 28 because, according to the Presidency, the fight against crime was part of radical socio-economic transformation.

Friday’s comments to the traditional leaders followed those Zuma made in his reply to the parliamentary debate on his State of the Nation Address (SONA). “Part of what the officers told me at Nyanga was that they are faced with a problem… They arrest criminals, but the problem is that when they get to court, they are released. And once they are released they actually interfere with witnesses.”

The president added that it was problematic that the rights of criminals, but not of victims and witnesses, were respected. “What does this mean? Is the weaknesses within our laws or the Constitution?” Zuma asked on February 16.

And so on Sunday, the justice, crime prevention and security cluster – including the ministers of defence, police, state security, home affairs and justice – confirmed such a review was under way.

In the absence of the justice and police ministers – Justice Minister Michael Masutha was booked off ill, it was publicly said, although no reasons were given for Police Minister Nkosinathi Nhleko’s absence – State Security Minister David Mahlobo explained there was nothing unusual about this legislative review.

“We review what works and we review what does not work. The instruction has been given to us to review on the basis of our people on the ground,” said Mahlobo, without providing details of the time frame for this review. “We need to strengthen certain laws at least to say crime does not pay.”

Some details emerged from the Justice Department’s contribution: tightening bail legislation, in particular, was coming under scrutiny. “There are new developments requiring review,” said the department’s Deputy Director-General, Advocate JB Skosana, pointing out that “issues like state security, issues like national sovereignty (and) interests of communities”, which are currently not included, were considered.

However, he did not elaborate when asked about the already tougher requirements under Schedule 5 or 6 of the Criminal Procedure legislation. Tightened up some 16 years ago, these provisions make bail more difficult for serious crimes, including murder (particularly of police officials and witnesses), attempted murder, rape, statutory rape, indecent assault, assault with the intention to cause grievous bodily harm, and corruption involving amounts over half a million rand.

In those instances, the onus lies on the accused to prove bail would be in the interest of justice. Or as the justice department’s own frequently asked questions on bail on its website says: “Charging a person with a Schedule 6 offence places more burden on the accused to convince the court that it is not only in the interest of justice, but there are exceptional circumstances that exist to assist him to qualify to be released as such. This burden places the obligation for the accused to be forthcoming with information relating to the circumstances of the commission of the crime, which can be useful to the State during trial.”

Even in other crimes, the legislation requires courts to consider whether an accused is a threat to the community, what the community interests are, whether an accused will commit further crimes or interfere with witnesses and the likelihood of the accused attending trial. If the courts do not receive sufficient information from the SAPS, it may impact on bail provisioning.

But in the current wave of populist rhetoric it is useful to shift the focus from police action, or lack thereof.

The 2014/15 Victims of Crime Survey by Statistics South Africa highlights crime as a key factor to feeling unsafe, and how this accounted for just over half the households taking their own protective measures at home. The survey linked crime, particularly property crimes, to drug related needs (77%), especially in the Western and Eastern Cape and Gauteng. While 57% indicated they were satisfied with the police in their area, 54.4% were satisfied with the courts.

However, the Victims of Crime Survey said “the prevalence and under-reporting of crime incidents to SAPS remain a major concern in the country”.

On Sunday the security cluster ministers “noted” the survey, saying work was under way to respond responsibly to some of the survey’s “assertions”.

“We remain committed to instilling public confidence in the police and the entire criminal justice value chain at all times, especially among victims of crime,” said the ministers, before highlighting a drop in crime.

The crime statistics for the period of April 1, 2016 to December 31, 2016 were presented to Parliament’s portfolio committee on Friday. A decrease of crime was noted, particularly in the third quarter of the financial year from September to December, co-oinciding largely with the SAPS’ festive season programme.

However, the so-called trio crimes – robberies at residential and business premises and car-hijackings – increased by 14.9% while robbery with aggravating circumstances, or the use of weapons, increased by 6.1%. As the SAPS told MPs between April and December 2016, murders had dropped in five of the nine provinces, or overall by 0.1%; the national numbers showed this simply meant a reduction of 10 murders to 14,333 from 14,343.

An analysis is only meaningful once the full year’s statistics, including for the fourth quarter of the 2016 financial year ending on March 31, are released.

While Cabinet in early June 2016 decided to make these figures available on a quarterly basis, Friday’s presentation was the first for 2016 and covered three of the four quarters. The delay remains unclear as Cabinet in the statement on its meeting of December 7, 2016 indicated approval for the release of the 2016 financial year’s first two quarters.

On Sunday acting SAPS national commissioner Major-General Khomotso Phahlane said the police had been unable to publicly release the quarterly crime statistics every quarter as certain processes first had to be followed, including getting approval from Cabinet before tabling the statistics publicly at Parliament’s police committee. But that did not mean the statistics were not available in the month after the quarter finished. “The statistics are available at the end of the quarter for operational purposes,” he said.

And so it will depend on the SAPS and Cabinet whether MPs receive the crime statistics for the fourth quarters of 2106 ending on March 31, 2017 in April, or whether they must wait longer. As the review of criminal justice legislation shows, only where there’s a will is there a way. DM

Photo: South African policemen arrest residents who are allegedly involved in looting and clashes with foreign residents during a xenophobic march by the Mamelodi Concerned Residents through the streets of Pretoria, South Africa, 24 February 2017. EPA/KIM LUDBROOK