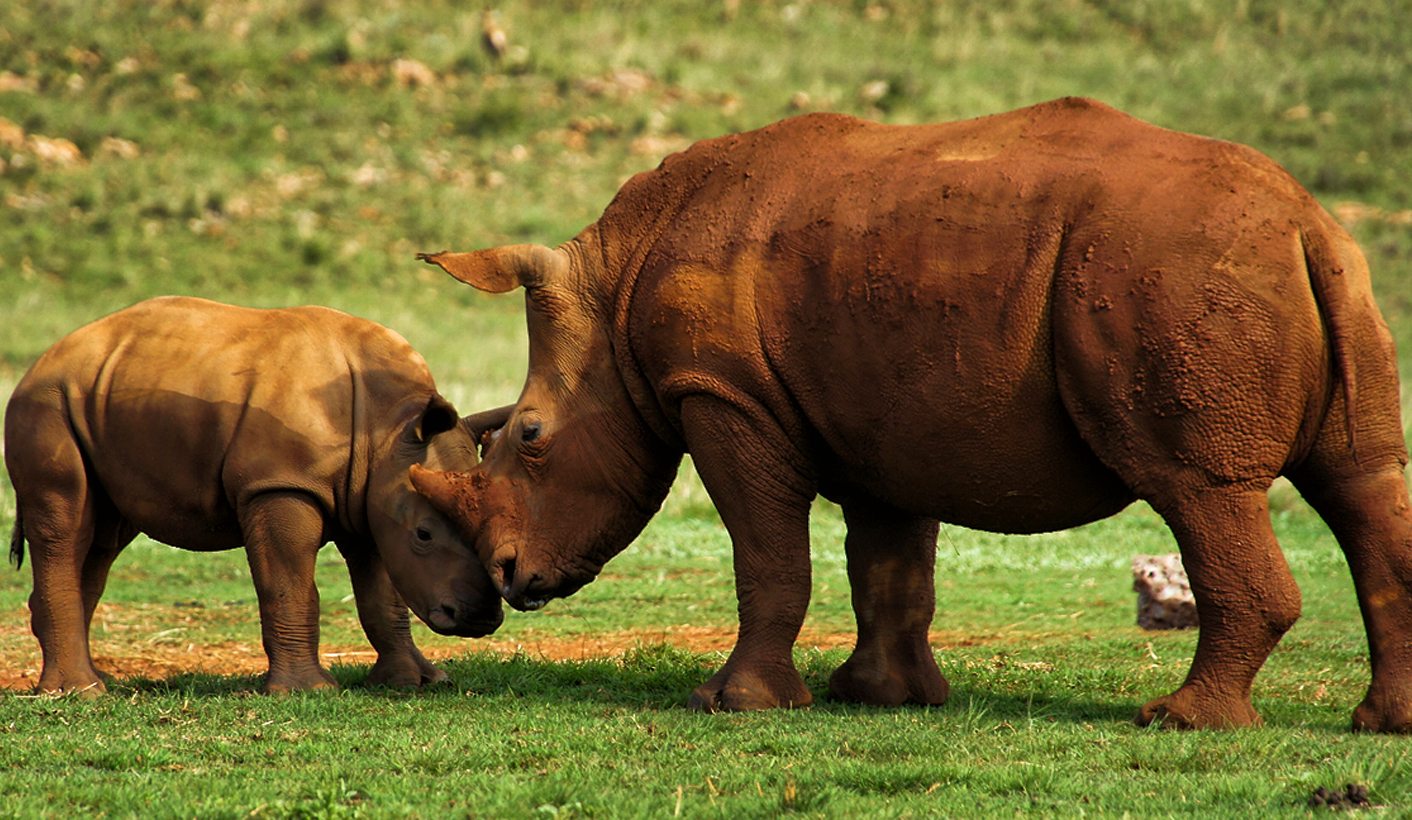 The public has until March 8 to respond to draft regulations by the South African Department of Environmental Affairs (DEA) which seek to make widespread sale of rhino horn legal and could undermine attempts by CITES to save rhinos. Speaking in a Parliamentary portfolio committee on Tuesday February 21, Minister Edna Molewa and DEA biodiversity director Thea Carroll spoke to the regulations in terms of legalising the sale of two rhino horns per person, but failed to mention the devil in the detail which a closer reading of the regulations later revealed, writes DON PINNOCK.

It turns out the two-per-person discussion was a red herring which effectively diverted attention of the few attending MPs from the fact that this only applied to “a person from a foreign state”. South Africans wanting to buy or sell rhino horn, on obtaining a permit, would have no such restriction and could trade and export as much horn as they pleased. Foreigners owning rhinos could also do so.

Because the paragraph concerning the two-horn restriction referred to
“a person contemplated” in another part of the regulations, it was easy to miss the key point that the “person” referred to was only a foreign national not domiciled in South Africa or not owning a rhino. No such restriction was placed on locals.

South Africa has the greatest number of rhinos in the world and a huge poaching problem. Legalising trade and export is likely to collapse international attempts to protect rhinos. If the trade regulations become law, the decline and possible extinction in the wild of rhinos will be in the interest of rhino breeders, who will then control the world market.

The back story to the announcement is that last year the moratorium on sale was challenged by private sector rhino breeders who won on a technicality. Molewa took the result on appeal to the Constitutional Court. Then, on February 8 – possibly anticipating losing the Constitutional Court appeal – she announced new draft regulations, giving the public a mere 30 days to make representations or objections.

The effect, if the regulations become law, is that South Africa will be an almost open market for trading and even exporting rhino horn. This is a slap in the face for the overwhelming majority of countries that voted against the trade in horn at the CITES CoP17 meeting in Gauteng last year and a huge victory for the very few, extremely wealthy, rhino farmers and potential traders who have been lobbying Molewa for years.

The draft regulations seek to justify the trade through the fiction that it may only be traded for personal purposes, but leaves out what “personal” may mean. In a lengthy statement on Monday February 27, none of these issues were addressed by the DEA.

In terms of Article III of the CITES Convention, as long as the import is “not for commercial purposes”, import and export permits are allowed. If the purpose is “personal” there is no limit to the number of specimens involved. There is also the exception (for residents) allowing for export of personal and household effects (Article VII).

According to Environmental attorney Cormac Cullinan, “by requiring exports to be for ‘personal purpose’ (whatever that means) the DEA is obviously trying to create the impression that it is not contravening CITES by permitting trade for commercial purposes”.

In answer to my question about the difference between “trade” and “for commercial purposes” upon which the export regulations would hang, the DEA responded:

“An import permit can only be issued if the CITES authority of the state of import is satisfied that the specimen (rhino horn) is not to be used for primarily commercial purposes.

“Primarily commercial purposes are defined in a CITES Resolution adopted at the 15th Conference of the Parties, which requires that the terms ‘commercial purposes’ should be defined by the country of import ‘as broadly as possible’ so that any transaction which is not wholly ‘non-commercial’ will be regarded as ‘commercial’. It is … not the South African government’s responsibility to prove that a country has the necessary legislation.”

As the CITES definition goes, you could fly a Boeing through that without touching sides, which seems what the DEA plans to do. The only place the SA draft regulations clearly exceeds CITES’ dictum is by stating that an export permit can be issued on the basis of a letter from the importing country rather than a proper import permit. This not only contradicts CITES but South Africa’s own CITES Regulations.

A possible scenario in terms of the regulations could be that a private owner in South Africa wants to sell a large number of horns to a buyer in Vietnam. To avoid the restrictions regarding foreigners, he sells the rhino to the buyer. The rhinos, of course, stay in South Africa.

Once the foreign buyer has title to the rhinos, he can then, once the required import and export permits are in place, import their horns without being bound by the two-horn limit. He may even (this is not clear) be able to import horns previously removed from the rhinos he owns as part of a dehorning operation.

Of course, the possibility of ensuring use is personal and tracking this use into foreign countries after export is another fiction. What rhino traders will hope for is that the regulations will give the appearance that the trade is under control and non-commercial, but that once the horns reach (say) Vietnam, everyone will nudge, wink and look the other way. The huge black market value of horn will ensure that uncontrolled cheating will take place.

A 2014 report by the DEA warned that “one of the most important hurdles South Africa will need to overcome in order to legalise national trade in rhino horn is to prove to CITES that internal effective trade controls have been implemented and are sufficient to prevent the laundering of illegally obtained rhino horn”. The DEA appears to now consider that they are sufficient, but has not detailed what they are.

In Parliament, Molewa explained there had been a moratorium on rhino horn sales since 2009 simply because the department needed to “clear its house”. But all the orders and regulations “are now in place and people are asking why we need a moratorium”. Those people are clearly rhino farmers.

Molewa did not give details of the “orders and regulations” that would warrant ending the moratorium. In fact, the draft regulations suggest a need for future regulation, calling for a limiting of exit ports to OR Tambo Airport and a raft of DNA, microchip and document checking which the DEA has still to put in place.

Its presentation failed to answer a number of pertinent questions:

Much appears to hinge on the Constitutional Court finding on the legitimacy of the private challenge to the moratorium. If it finds against the minister, it is probable that the moratorium on rhino horn sales will be lifted and trade will begin.

According to Cullinan, “When you consider that South Africa, as a signatory to CITES, has undertaken to work with other countries to ensure that international trade does not threaten endangered species like rhino, these regulations are particularly nefarious as they directly undermine CITES. We should be trying to eliminate demand for rhino horn, not stimulate it.”

Lifting the trade ban would, of course, not be good news for rhinos because there’s a demonstrable link between the sale of farmed wildlife and poaching. It would serve to stimulate almost limitless Asian markets through the sale of limited goods which would not take long to bleed into illegal procurement through poaching. DM