Op-Ed: Pope vs Conservatives – when the shepherd wears lace 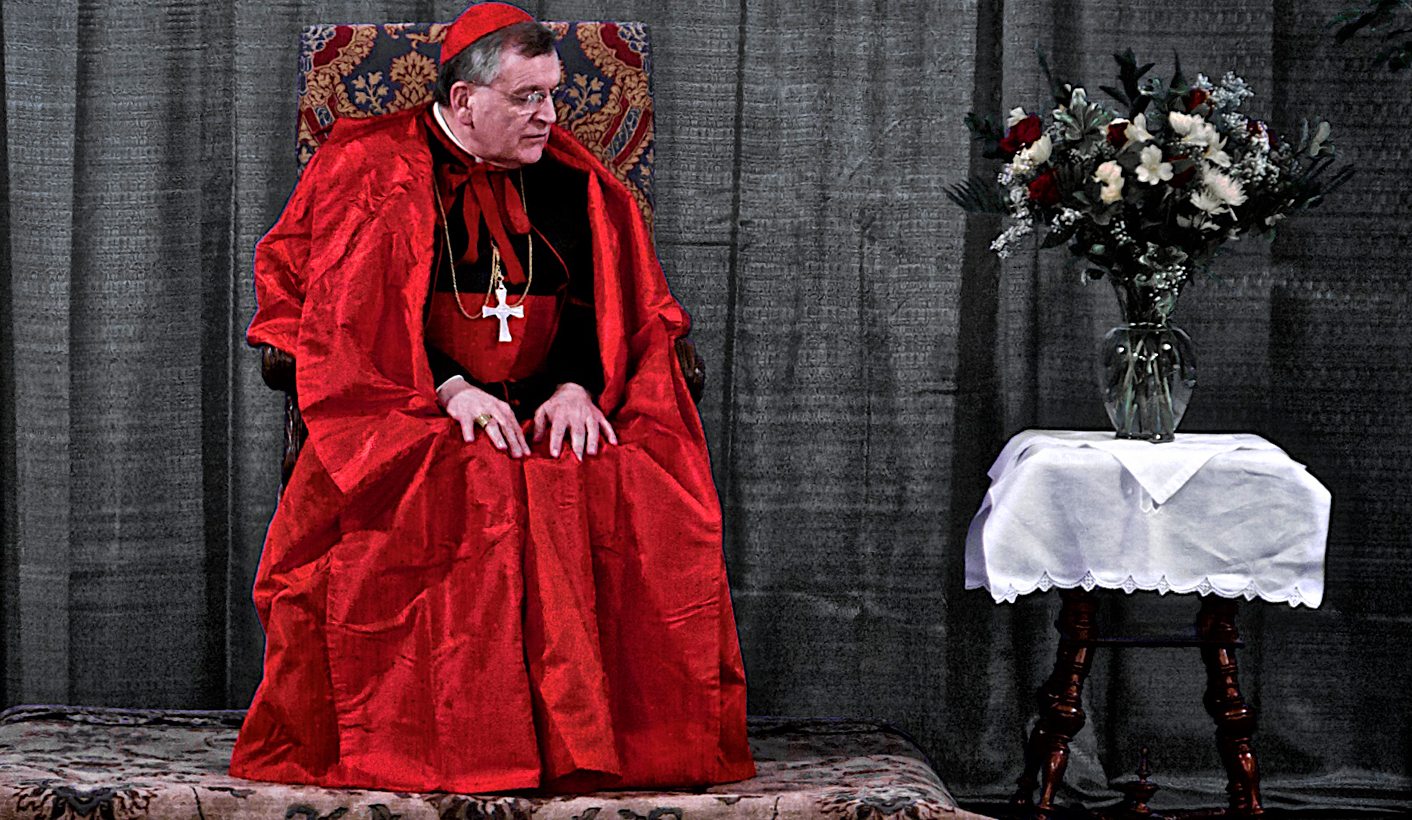 The well-known face of Catholic conservatism and opposition to Pope Francis, Cardinal Raymond Burke, told a congregation in Kansas City recently: “When the shepherd becomes a wolf, the first duty of the flock is to defend itself.” This, again, is a sign that the honeymoon phase of this papacy is something of the past. Earlier this month posters appeared all over Rome depicting a stern-looking pope with the question: “Where’s your mercy?” printed on them. Some speculated that Burke was part of this campaign. And, on a Sunday visit to a parish in Rome, Pope Francis warned that a vendetta and talking behind people’s backs is “not Christian”. Will Pope Francis go head-to-head with his most vociferous detractors? By RUSSELL POLLITT.

It is no secret that Pope Francis’s reform of the Catholic Church, and his more pastoral approach to doctrinal issues, has allowed deep-seated tensions within the Church to surface. Tensions have always existed – even though some would never dare to admit this. The difference is that under Francis’s leadership these tensions have not been pushed under the proverbial carpet. During the reign of John Paul ll difference was frowned upon. In fact, John Paul ll clamped down on and silenced several theologians who proffered a different opinion. It was better to present a unified front even though tensions simmered just below the surface. Francis, on the other hand, has created a space in which people can speak their minds and, of course, differ. Hierarchs differing is one thing, but going all out to discredit the pope is another, though.

Late last year conservative American cardinal, Raymond Burke, together with three other cardinals (Italian Carlo Caffarra and Germans Walter Brandmüller and Joachim Meisner), wrote a letter to Pope Francis in which they asked him to clarify his stance, especially on the issue of the reception of communion in the document. They raised five “dubia” (literally “doubts”) about what the pope had said in Amoris Latetia. Their concerns about the document centred on what they said it had provoked among Catholics, “uncertainty, confusion and disorientation.”

This is not entirely true. Many Catholics welcomed the document and liked the new approach which was regarded as reaching out to people and taking the reality of their struggles and lives seriously. Francis did not respond and so the four cardinals went public. Burke threatened to publicly correct the pope. He claims that the pope is basically in doctrinal error. In 2014 Burke said that the Catholic Church under Francis was like “a ship without a rudder”.

Burke himself is no stranger to controversy. He attracted lot of attention a few years ago when he made headlines for dressing up in archaic lace vestments and the now defunct cappa magna (literally “great cape”) – a voluminous long train which used to be worn by cardinals.

He had been removed by Pope Francis from a senior position in 2014, head of the Vatican’s highest court, the Apostolic Signatura. Francis appointed him to serve as patron of the Knights of Malta – an ancient chivalrous order that enjoys the international equivalence of a state and has observer status at the UN. The order maintains a worldwide prestigious membership and takes care of thousands of charitable causes. In short, it has something of the status of a sovereign “state”. Burke was also taken off the influential Congregation of Bishops – the department of the Vatican responsible for recommending new bishops to the pope for places around the world.

More recently he ran afoul with the pontiff for his involvement in a controversy with the leadership of the Knights of Malta. In December, the Grand Chancellor of the Order, Albrecht von Boeselager was asked to step down. The pretext for this was that, while in charge of the humanitarian wing of the organisation, other partner organisations funded by them had distributed condoms in AIDS prevention projects among the poor. Boeselager had long been investigated and cleared. Burke commissioned a traditionalist organisation to investigate and provide fresh evidence.

Initial reports claimed that the Order’s Grand Knight, Matthew Festing, had asked Boeselager to resign while Burke sat silently present. Boeselager claimed that the cardinal had invoked the pope’s authority for the dismissal. Burke denied this. Later, in the Austrian daily newspaper, Der Standard, Ludwin Hofmann von Runerstein, who was also present at the meeting, said that it was Burke who told Boeselager to quit. Pope Francis was accused of interfering in the sovereignty of the order and came under fire from traditionalists. (Ironically, when John Paul ll had interfered in the running of other religious orders, like the Jesuits and Franciscans, there was never an outcry from traditionalists.) It turns out, however, that it was not Francis but Burke himself who had violated the sovereignty of the order.

Eventually the head of the order, Matthew Festing, resigned in January – for seemingly colluding with Burke – and the organisation was placed under a papal delegate until a new leader is elected. This move, in effect, also meant that Burke was replaced by another prelate.

Days after the Knights saga played out it emerged too that Burke has met with right-wing Italian nationalist and head of the Northern League Party, Matteo Salvini, in early February. Salvini is a Donald Trump supporter and strong critic of the pope’s outreach to migrants and refugees. It is curious that Burke meets with political leaders like Salvini. The Vatican has a diplomatic machine that is quite capable of dealing with politics. It suggests, again, that Burke has an agenda. The Washington Post published a scathing attack on Burke under the headline “How Pope Francis can cleanse the far-right rot from the Catholic Church”. In the op-ed Emma-Kate Symons pointed out that Burke made “a flagrant political intervention on the side of the extreme-right racist grouping ahead of the Italian elections”.

Three days before Burke went to the US to speak in Kansas the New York Times revealed how Burke had met with the Trump administration’s White House strategist, Stephen Bannon in 2014. Bannon went to Rome looking for a correspondent for his alt-right Breitbart News. He found a correspondent and also met Burke. The New York Times article has, as its central thesis, that the election of Trump and the rise of Bannon is being seen by Catholic traditionalists as a chance to derail the agenda of Pope Francis. The article claims that Burke and Bannon keep in touch.

Days after Burke’s sermon in Kansas one of the members of the pope’s special advisory council – the so-called C9 – Cardinal Reinhard Marx (considered a theological and ecclesial heavyweight) reiterated that support for Pope Francis was “substantial”. Marx told journalists that there were tensions in the church because “differences of opinion have always been there”. He added: “It will be forever like this.”.The C9 had issued a statement in which they reiterated their support for Pope Francis. The cardinals – from Australia, Austria, Chile, Germany, India, Honduras Congo, Italy and the US – normally issue statements at the end of their regular meetings with the pope. The statement last week expressing solidarity with the pope was out of the ordinary. The statement may have been in response to the posters around Rome questioning the pope’s decisions – like not answering the “dubia” or placing a papal delegate in-charge of the Knights of Malta. The statement may also be a subtle response to Burke’s opposition.

What will Francis do? Will he defrock Burke? Being made cardinal is, after all, a privilege – it is conceivable that the pope could remove Burke. Church law says that this is possible for a “grave cause”. It is unlikely, however, that Francis will do this. First, he has said nothing about defrocking any of his detractors. Second, Francis is unlikely to remove him because he has stressed repeatedly the need for people to speak openly and freely and enter dialogue. Third, removing Burke would make him a martyr for the conservative cause, something Francis would want to avoid. Fourth, although he often grabs headlines, Burke represents, it seems, a small arch-conservative Catholic constituency (mostly American) with money, whose “influence” is unfortunately rooted in their ability to buy and maintain space in the blogosphere. In the greater scheme of things, he is not as influential as he may think or seem. Fifth, Francis had effectively “retired” Burke already when he removed him from his position in Rome and made him the patron of the Knights of Malta. The order simply does not matter much in the present-day Vatican.

So Francis will, most likely, do nothing. His closest collaborators, the C9, have come out in support of him. The wisest thing would be for him to leave Burke and his allies to get on with whatever it is that they are doing. Francis has made it clear that there are bigger issues at stake: the plight of migrants, the world economy, leadership and the plight of the poor. He played an important role in engineering the thawing of the relationship between Cuba and the US. He has a vision of a church that is much more engaged, open and welcoming. He is unlikely to be derailed by the likes of Burke.

Francis still enjoys worldwide popularity, and is respected by Catholics and non-Catholics. As many people recoil against the current right-wing populist rants of some powerful public figures, Francis may even gain stature, being the voice of reason, moderation and tolerance.

It is mischievous, but perhaps more apt to warn: when the shepherd wears lace, be concerned. DM