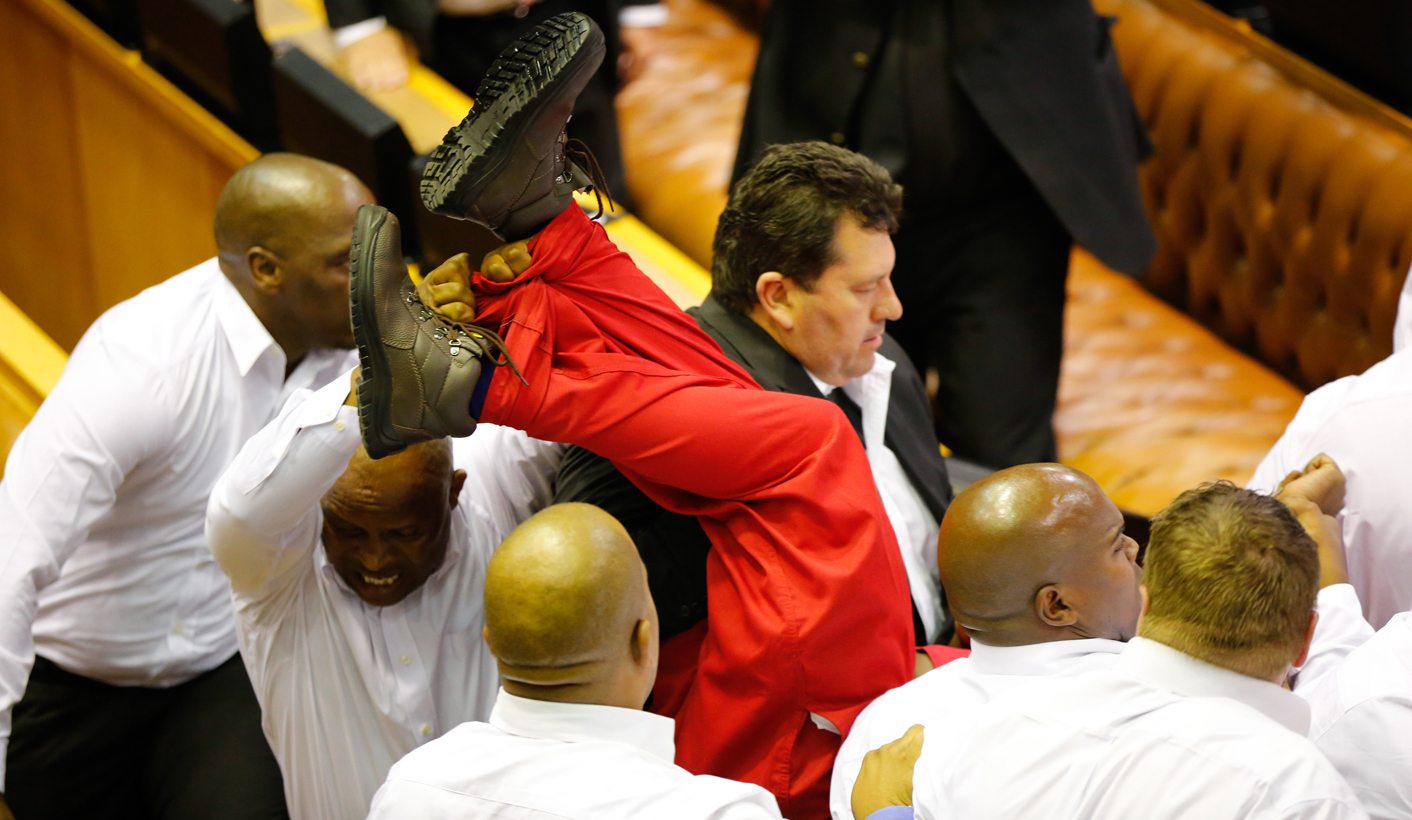 It’s moments like these when South Africans must take a reality check: when leaders applaud as their opponents are manhandled out of Parliament, when the words “fuck you” are screamed on live television for the world to hear, and when the man at the head of it all chuckles contentedly to himself as the chaos ensues. By REBECCA MQAMELO.

Last week I attended the “Post-SONA, Post-Truth” panel discussion hosted by the Daily Maverick and the Jesuit Institute. A few days before this, I had attended a SaveSA campaign gathering at St George’s Cathedral. This was my first rendezvous with the world of political meetings and proactive citizenry (save for a brief bout of job shadowing at Parliament in Grade 11 which left me cringing at the thought of ever becoming a politician), and it got me thinking about the state of our democracy.

I stopped watching the live broadcast of the State of the Nation Address after the opposition parties walked out. I’d heard enough of cable ties, biological injections and SECTION27s to care any more. Instead, like so many of my peers, I took to Twitter to follow the scathing commentary and witty memes.

To most of us, the bickering and violence demonstrated before Zuma’s speech was a more accurate reflection of the state of the nation than any monotonous, 5,000-word speech that the president could deliver. What he said was inconsequential. It’s what he did not say that mattered more.

We heard nothing about plans to disclose more information on the nuclear deal. We are thus left to conclude that we are selling our souls to the Russians, after all. We heard nothing of tangible solutions for the current land reform programme – a critical point and, after 23 years, still a grey area. And should we forgive him for claiming his government has delivered 4-million houses, when the figure is closer to 3-million? When you’re Jacob Zuma, it hardly matters whether you add an extra million or two.

From having witnessed a panel discussion conducted by some of South Africa’s most renowned journalists, I took away three important insights regarding the State of the Nation Address:

It would be comforting to think that the trauma we witnessed was an anomaly exclusive to South Africa – but the truth is that we are no exception. What we saw on Thursday was just the tip of the iceberg, a small manifestation of what Marianne Thamm calls the “much deeper, darker shadow state”.

All over the world, we are seeing the steady rollback of core democratic values and in its place, the establishment of a new global political culture – one in which the people who own the means of production own the state; one in which politicians work hand-in-hand with organised crime; one in which critical voices are automatically seen as enemies, and one in which intimidation, polarisation and political perversion are the order of the day. What we saw on Thursday was not an anomaly. It was the norm. It was a mirror.

Inevitably, we begin to ask the kinds of questions that reflect the depth of the instability; questions we might never have asked 20 years ago (when I was not yet born). Does democracy matter any more? Where do we go from here? We need to understand what it means to be an individual within this greater system, and to consider our own role in determining how we are governed.

Active citizenship is, to me, the answer. Democracy is not a passive thing – it relies on the everyday choices people make to either uphold it or ignore it. At a time when democracy has lost so much of its legitimacy and credibility worldwide, we need to be doing everything in our power to preserve and adapt our democracy.

“Democratic participation” entails not only casting that one vote every five years, but also speaking, petitioning, being present and standing up for what we know is right. I am glad to see that fellow South Africans are beginning to dilute the die-hard, post-apartheid identity politics with an emphasis on what ultimately affects us most: good governance.

We’re seeing movements and organisations spring up that are demanding that our leaders account to us. The presence of big names likes Zolani Mahola at the SaveSA gathering, and even Annie Lennox who graced us at the Post-Truth discussion, shows us that more and more people are taking a stance. I am still unsure how one does this when it seems we have been hijacked into a gangster state run by elitists and criminals… I shudder to think what journalists face in their quest to uncover the truth – and even more so after hearing a journalist like Marianne Thamm saying, “I sometimes feel I need to bathe myself in the rivers of Jordan to cleanse myself from this rot.”

There are very few people who put in the effort to rid us of the political muck in which we currently find ourselves; the Helen Suzman Foundation, Accountability Now, the SaveSA campaign, and needless to say, many hardworking journalists. A major criticism I have of civic campaigns such as SaveSA, however, is that they reduce our problems to one man. Alongside the wailing of children and screaming of babies, the one chant I heard the most at St George’s Cathedral at a rally on Wednesday was “Zuma Must Go”. Zuma has had ample opportunity to step down – if he had the decency to resign, he would have done so already. He is more likely to finish his term and hand over office to his successor.

So what happens when Zuma “goes”? Does civil society go back to the humdrum routine of daily existence? Or will we have to wait for another sacking of a finance minister to wake up and realise that the survival of our democracy and economy is dependent on how we, the citizens, interact with our leaders? What is to say that we will not have a leader far worse than Zuma in the future, as difficult as it is to imagine?

The reason that campaigns such as #ZumaMustFall failed to gain traction is that they represented the largely white portion of the population who snatched a convenient moment to show they cared – after Jacob Zuma fired the finance minister Nhlanhla Nene, and put the Treasury, stocks and rand in jeopardy. Suddenly, even the private sector realised it had to take politics seriously. Where were these people after Marikana, when instead of the rand dropping, it was human lives?

We need to get over this issues-based and individuals-based approach in our response to politics. We need to be active even when the storms die down, because it is the deeper rot that needs addressing: the secret deals, the slow eroding of access to information, the incremental biting away at critical institutions. Trump is doing it, Erdo?an is doing it, Putin is doing it, and countless other governments all over the world are doing it. The message is clear: we need to wake up and refuse to allow this hijacking of the one system that we know, at its core, protects our freedoms – democracy. This is our world too. DM

Rebecca Mqamelo is an Mthatha-born South African who is fresh out of high school. She is a national debating champion, international public speaker and winner of the precocious title “Matric of the Year 2016”. While she awaits the start of the university year in San Francisco, she kills time by writing, jogging and blogging. Her idea of fun is learning Russian and German and watching Kazakh films.