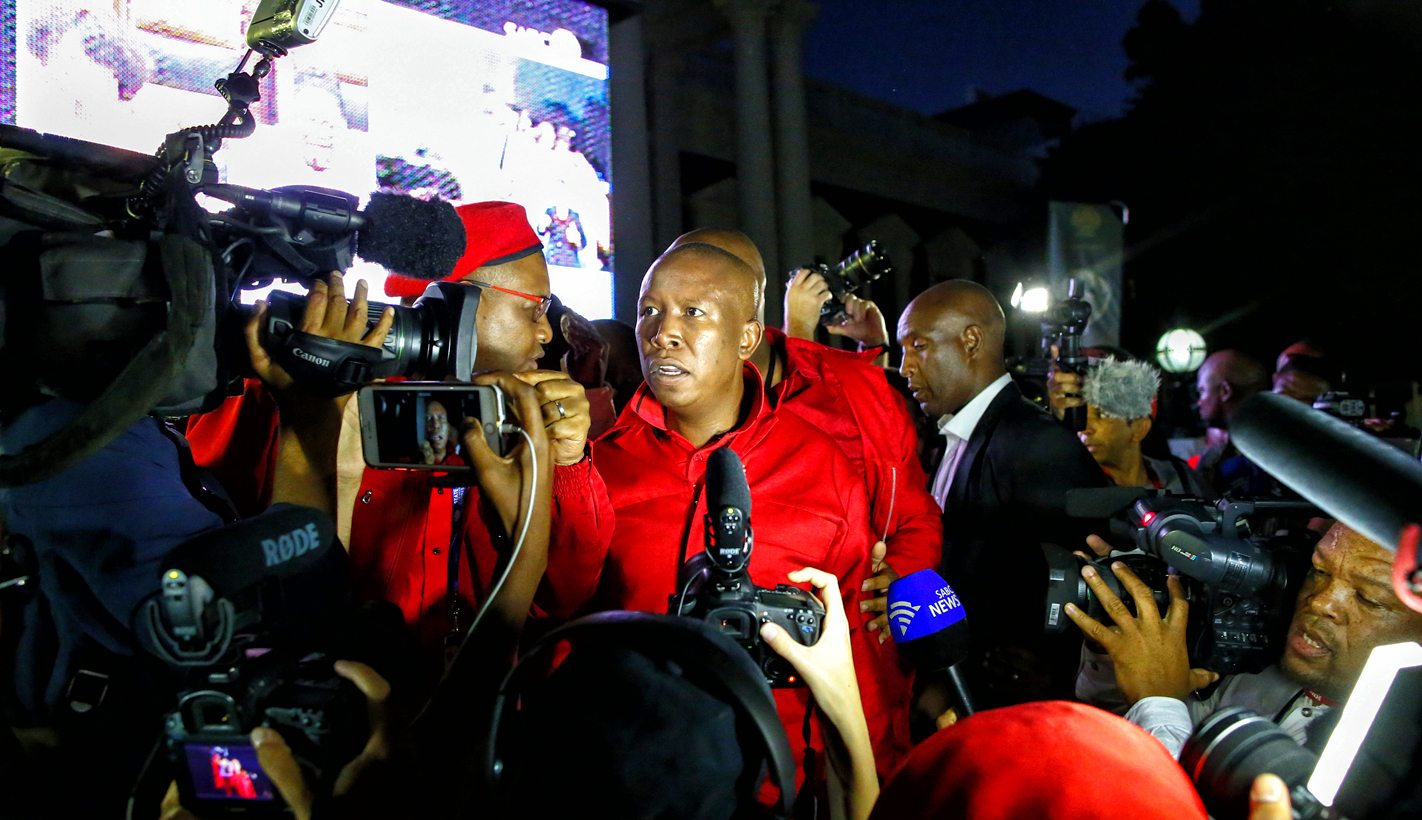 It was a mess. Despite the ring of steel in and around Parliament for President Jacob Zuma’s 2017 State of the Nation, ugly brutal scenes inside building unfolded, again. EFF MPs were evicted by force by men and women dressed in white shirts, same as in 2015. The pursuit continued by police in body armour, riot shields and helmets in the precinct outside, but was short-lived. The DA walked out of the House. This was a re-run of the SONAs past and yet another ugly display of force in the people's house. By MARIANNE MERTEN.

It was the cable ties and word of “injections with biological weapons” that started the fracas, almost 90 minutes later leading to the forceful eviction of EFF MPs by the men and women, the party said were police officers disguised as parliamentary protection services.

“This cable tie, we took it from a security guy outside. A caring Speaker, who cares about all members, would have immediately sanctioned a brief investigation to be made. There are 21 policemen in white shirts, they came here in police vehicles…” said Malema, adding the president was illegitimate and could not address the House. “Mr Zuma has collapsed his own right to address us here. 441 soldiers will not protect you. Your problems are not outside, your problems are here…”

But like National Assembly Speaker Baleka Mbete turned down a DA request for a moment of silence for the 94 mentally-ill patients who died in Gauteng, she declined to issue an assurance cable ties would not be used.

DA leader Mmusi Maimane intervened to proceed despite the presence of soldiers.

“The Constitution has been violated which PW Botha would have been proud of…. Can we proceed on this matter so we can talk about the people’s business,” he said.

The objections continued. And it was Cope MP Willie Madisha was the first to be evicted from the House as he, like his party boss Terror Lekota before him and the EFF, questioned Zuma’s legitimacy to address the joint sitting. Five men in white shirts escorted him out, peacefully. The microphones were cut as Madisha continued to speak.

This despite Parliament’s assurances last week there would be no interruptions to the feed from the House.

EFF MP Fana Mokoena said, “We’ve just seen that cable”, in reference to the cable ties. “This entire gathering is unconstitutional. It should not be addressed by someone who has broken his oath of office”.

Then Mbete and fellow presiding officer National Council of Provinces (NCOP) chairperson Thandi Modise said it was enough. If parliamentarians who did not wish to listen to the president leave the House, they would be persuaded and  “assisted”.

Malema got personal. “That is exactly why you are not a candidate for the (ANC) Women’s League” he said in a reference to the League’s endorsement of former African Union commission chairperson Nkosazana Dlamini Zuma as ANC president. “Even your own people have dumped you… exactly for that conduct,” said Malema. “He (Zuma) used you and abused you he promised you you’d be president. You went home to slaughter a cow…”

Mbete hit back, saying she would “not allow members to feel threatened because you have a campaign….”. Then she requested “Allow Honourable (IFP leader Mangosuthu) Buthelezi to move from his seat…  I have called on the parliamentary protection services to come into the chamber.”

Then came the men and women dressed in white shirts. Scuffles unfolded, the security personnel stepped over benches and tables. It was a fight. And amid screaming, it continued outside. A line of riot police stood their ground, then moved into formation.

Then it appeared to calm down.

Before a giant television screen featuring Maimane saying that what had unfolded in the House was unacceptable, EFF leader Julius Malema bided his time. “The ANC has suspended the Constitution,” he said, adding for the first time police and soldiers entered the House. “Baleka (Mbete) has collapsed this Parliament into a department of the Zuma administration”.

As he spoke loud bangs could be heard from just outside the precinct. The drama unfolded as people, some Parliament employees, others bodyguards milled around. A line of riot police blocked the way back up towards the National Assembly, and the offices of media based at Parliament.

Inside the House, Zuma was told to start – “Finally” he said before his inimitable brief giggle. DM

Photo: Julius Malema (C), leader of the Economic Freedom Fighters (EFF) party, reacts after being thrown out of parliament during the State Of The Nation Address (SONA) by President Zuma in parliament, Cape Town, South Africa 09 February 2017. More than 400 soldiers have been deployed for the 2017 SONA, the 10th by President Jacob Zuma in his capacity as Head of State. The SONA tables a programme of action for the year and accounts for progress made since the previous commitments in February 2016. EPA/NIC BOTHMA / POOL