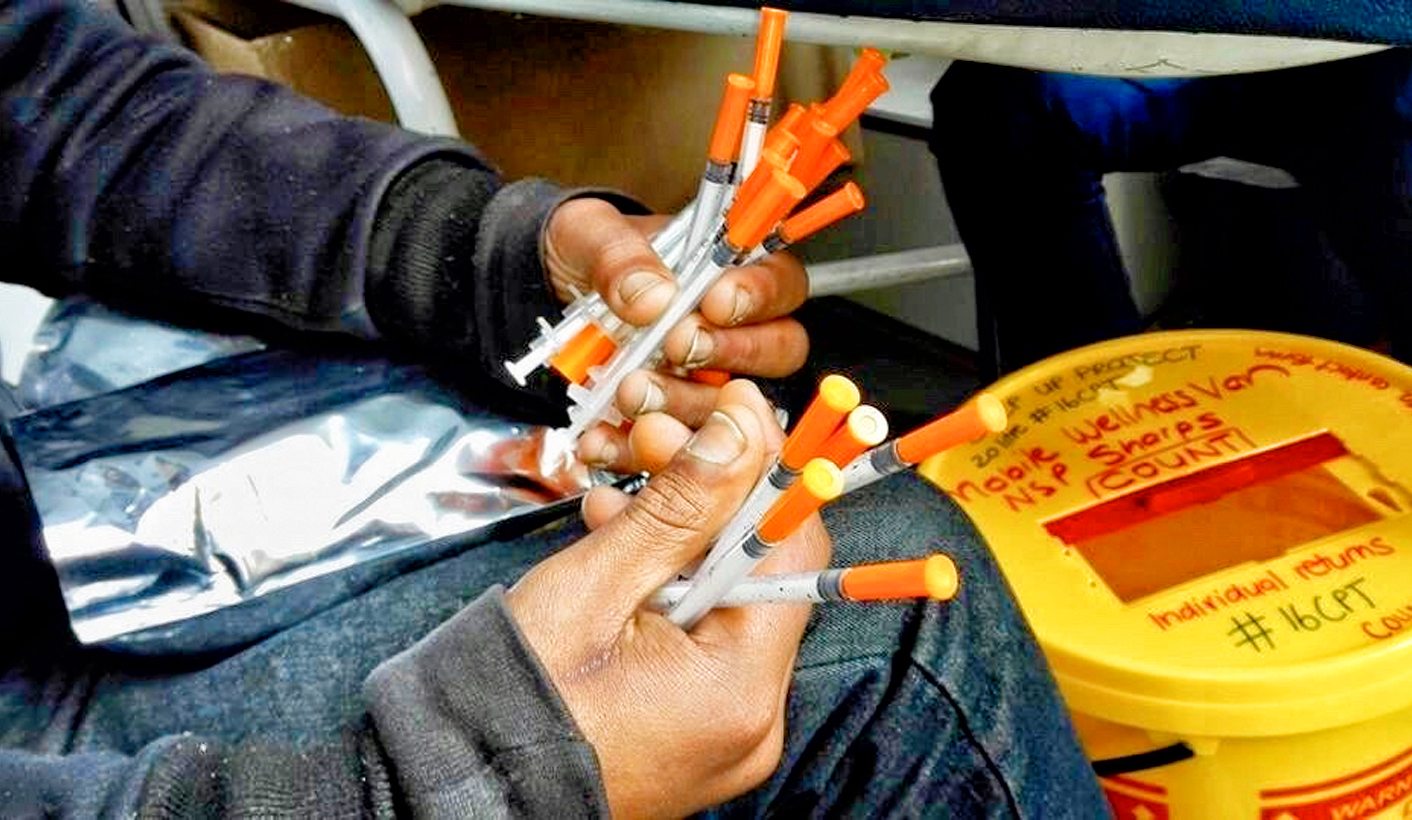 Harm reduction is better than a police war on drugs, argues the TB/HIV Care Association. By Ian Broughton for GROUNDUP.

The body of Thokazani Hadebe lay on the pavement on the corner of Milne and Point Road, Durban, for the better part of a day before it was removed — a chilling reminder of the dangers of injecting drugs.

According to a friend, Hadebe had come out of prison the day before and that same night he purchased a R75 unit of stone (heroin), mixed it with 20ml of water, and injected it. This was after taking mandrax and drinking alcohol. Hadebe passed out and it was only much later that someone realised he wasn’t just sleeping.

His death is just one of many among injecting drug users in Durban who have died over the past year from either overdosing or drug-related afflictions and diseases. Hadebe’s death points to the great need for the harm reduction services.

One NGO running monthly educational meetings for people who inject drugs is the TB/HIV Care Association (TB/HIV Care). It teaches safe injecting practices and how to avoid overdoses. The service is offered in several cities.

However, negative attitudes and a “war on drugs mentality” in communities and among certain law enforcement officers pose a problem. In January, three health workers in Tshwane were arrested for distributing sterile water to drug users who inject drugs. The case was removed from the roll.

TB/HIV Care has a thick dossier of incidents where harm reduction efforts have met with opposition in the three cities where the NGO operates.

In Durban, one of the most frequently encountered problems has been that of police confiscating needles and sometimes arresting the user – even for possession of an unused needle. Many users say they do not carry their needles with them for fear of arrest.

Darius Fourie, 26, recently spent ten days in Westville prison awaiting trial, before getting a suspended sentence for “drug possession”. He was arrested in the shelter where he stays with a new, unused needle and a clean “cooker” (an item used to mix heroin with water and heat it up). He says police regularly raid the shelter when they need to make up their quota of arrests for the month. They go straight to the room where he stays with other users.

Robert Taylor, 46, says he was searched on the beach front by police looking for drugs, but when they found nothing, they confiscated his needles. On another occasion, he claims a police officer threatened to send his needles away for analysis and that he would sit in prison until the results came back.

“This was just to shut me up because I was questioning why they had arrested me when they found no drugs on me. They used the needles as leverage to get me to admit to possession of dagga. I was sentenced to 10 days in prison,” he says.

According to harm reduction advocates, such policies can lead to users being forced to share needles or using one needle multiple times, increasing the chance that it will become dirty and cause infections.

Injecting drug users lead a life in the shadows, one that makes them prone to many health threats. Consider Coco and Belinda as they were known on the streets. These two injecting users were well known among the Point Street drug community and health workers.

They are both dead. Coco died late last year and Belinda shortly afterwards. Both were HIV positive; Coco also had tuberculosis.

According to their friends, Belinda had been complaining about severe headaches for some time and shortly before her death had lost sight in one eye. The day before she died, she had been admitted to Addington Hospital with an abscess on her neck. Several users have confirmed that she had recently been injecting drugs into the veins in her neck, because most of the veins in her arms and legs had collapsed or were damaged.

Tony Antoniou, a 54-year-old user, says he appreciates the efforts of TB/HIV Care health workers who came looking for him recently to help him start treatment for hepatitis which he contracted from sharing needles. Previously, Antoniou’s right hand was amputated because of septicaemia.

TB/HIV Care recently started testing users for Hepatitis B and C and have come across at least 70 positive cases in Durban so far.

“The needle people are great,” says Antoniou, describing how he got a fright when a car pulled up alongside him while he was shooting up and he thought it was the police. They told him they had been looking for him all day to help him get started with treatment.

“Nobody else gives a damn about us drug users. Once you are a user and homeless, you get put into a category of being rubbish,” he says.

TB/HIV Care has long been lobbying for health services for drug users, whom it regards as a “key population” in the fight against HIV. The association runs the Step Up Project. It provides clean needles, educates users, helps them get treatment when they test positive for diseases, and teaches them about their rights.

Shelly says it is necessary to work closely with the South African Police Service to “further communicate a clear position on the legality of the project and the possession of unused syringes, so that station and cluster commanders are not in doubt”.

Shelly says UNAIDS research has shown that needle and syringe programmes reduce sharing of needles and unsafe injecting practices, decrease HIV transmission, are cost-effective and do not increase frequency of injecting or drug use.

Shelly says the most controversial part of the project has been the needle and syringe component, citing a lack of clarity on the possession of syringes among some law enforcement officers.

Stigma continues to be a barrier to providing adequate health services and education. TB/HIV Care was forced to move their offices from Stamford Hill to Umbilo following complaints from residents about the presence of drug users who used to gather outside the gates once a month for meetings.

However, last year at an event called Support Don’t Punish, a police officer from Durban Metropolitan spoke about how as a police officer, he understood that drug users were people who need support and should not be victimised. He spoke openly about his discomfort with the current enforcement and displacement strategies.

Prominent community activist Cheryl Johnson, co-founder of Save Our Berea, supports the harm reduction approach. “I accept that (drug use) exists and I support a harm reduction approach,” she says. “I think every effort should be made to enlighten (law enforcement) to another more compassionate point of view and that means a sustained education programme.” She added that although harm reduction was a viable alternative to solving the drug problem, communities would have to be widely consulted.

“They will need to be convinced that licit and illicit drug use is part of our world. Drug users must also be given a real voice in the creation of programmes and policies. It will take time to set up,” she says. DM

Photo: Source of controversy – needles that are handed out to injecting drug users. Photo: Ian Broughton