Gerrie Nel: A view from the Media Gallery 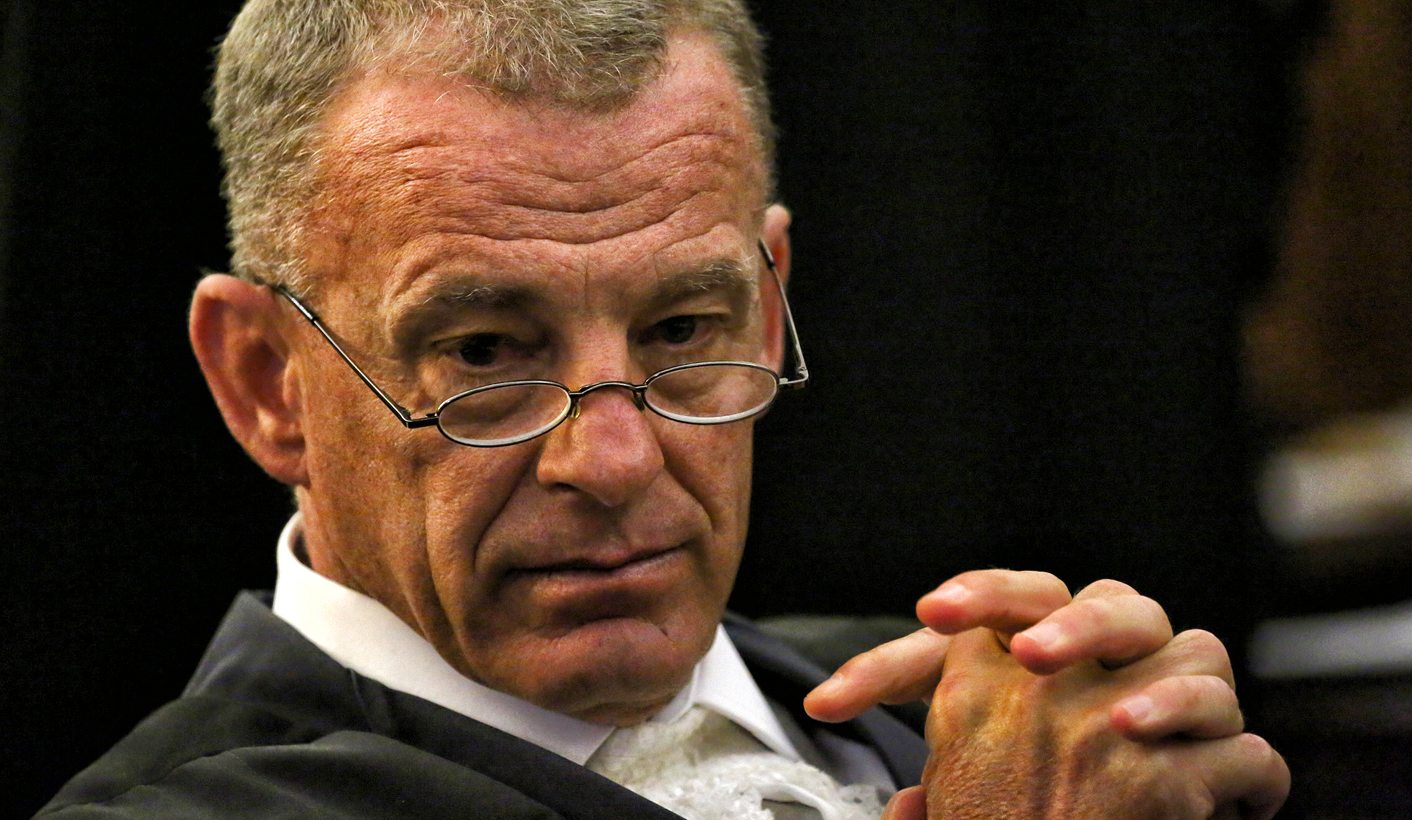 Over the past decade, MANDY WIENER has watched from the gallery in various courtrooms around Gauteng as Gerrie Nel prosecuted and secured convictions in some of the country’s most notorious criminal cases. She reflects on his career.

The image was minimised on the police officer’s laptop. With a slight nod of his head, Gerrie Nel gave the instruction to the cop for him to click his mouse and project the picture onto the big screens in the courtroom. It was all carefully choreographed.

“We’ve seen the effect that ammunition has on watermelon, it exploded … the same happened to Reeva’s head, it exploded, have a look,” said the prosecutor, as a bloodied photo of Reeva Steenkamp’s head flashed onto the screens in court. Oscar Pistorius reeled in disgust. The collective intake of air was audible.

This is arguably the defining moment of Gerrie Nel’s 36-year career as a state prosecutor. Or at least, it is the one he will be most widely remembered for. It was brutal, calculated and achieved its desired effect. Nel, a prosecutor with a reputation for being a “bulldog”, wanted to take his target to the very edge. It was ruthless and he would be widely criticised for the tactic. But it was characteristic of Nel’s approach to cross-examination. He never cared about the status of the individual in the box and showed very little emotion or humanity when doing his job. It made no difference to him if the accused was a celebrated police commissioner or a globally popular superstar. It was all about justice being served.

Gerrie Nel grew up in what was formerly known as Potgietersrus, (today’s Mokopane) in the old Northern Transvaal. He studied law in Pretoria before becoming a prosecutor after receiving a bursary from the government. He immediately earned a reputation for being passionate and prepared.

A state advocate once endearingly recalled how when she became a junior prosecutor in Johannesburg in the 1990s, she was very curious about “this funny, short man” who would rush through the DPP’s office during teatime with his gown flapping behind him and a bevy of policemen trailing in his wake. She soon learnt that Nel was cutting his tea break short because he was claustrophobic and wouldn’t catch the lifts in the building. He needed the time to run up the stairs to make it to court promptly. This same colleague says she first recognised Nel’s abilities when an old lady sitting in the public gallery approached her to tell her that it was the first time in years she’d seen someone argue with the “same passion and conviction as Gerrie Nel”.

Nel earned his stripes as a junior prosecutor for the state against former Conservative Party MP Clive Derby-Lewis and right-wing Polish immigrant Janus Walusz, who were convicted of assassinating South African Communist Party leader Chris Hani at his home in 1993. This is a fact probably not well known by those who have recently accused him of being a right-wing sympathiser.

He notched up several further successes as a junior prosecutor including conviction of Kempton Park dentist Casper Greeff for murdering his wife. In 1999, Nel joined the elite crime fighting unit known as the Scorpions as its Gauteng head and that is where he really made his mark. He spearheaded Operation Bad Guys, the investigation and prosecution of police commissioner Jackie Selebi and the murder of mining magnate Brett Kebble.

It was when his team was at the very heart of this investigation that I first met Nel. I accidentally stumbled into him at a self-storage facility in an industrial corner of Alberton. It was July 5, 2006 and Nel and investigator Andrew Leask had just set the dominos in motion to bring down an international drugs smuggling syndicate connected to Selebi. They were in the midst of a quarter-billion-rand drug bust – some agents were unloading boxes full of narcotics passed off as tiles, other members of the team were undercover, suspects were in the wind and deals on the table. There was a lot at play. I had been tipped off about the bust by a low-level forensics cop and nonchalantly walked onto the property, right up to some officious looking men with a “Hey guys, what’s going on here?” query. Despite the prospect of the entire operation being scuppered by an over-eager journalist, Nel was as cool and composed as ever. He negotiated a deal with me that I would hold the story for 48 hours until the suspects appeared in court and he agreed they wouldn’t leak the story to any other journalists.

Over the following 10 years since that first chance meeting, I watched from the public gallery as Nel led some of the most high-profile prosecutions in the country. Without fail, he was meticulously well prepared, carefully considered and brilliantly strategic. A keen wrestler who coaches kids in the sport, he was always tactical in his approach to a witness. He was wry and sarcastic, at times awkwardly so, as he attempted to introduce humour with a judge, often in a self-deprecating tone. He was a relentless prosecutor who argued with such intensity and sense of justice that it was apparent he was personally invested in his cases. He employed an admirable attention to detail and taunted his victims to the point of infuriation and is thus deeply despised by those he has brought down. He is curt, pithy and largely unemotive.

Regardless of how volatile the exchange in court, Nel’s attention was invariably focused on the sketchpad in front of him as he doodled away. By the end of a trial, his notebooks weren’t packed with page numbers or case law references; they were full of beautiful, intricate doodles.

Photo: Sketches from Gerrie Nel’s notebook during the Oscar Pistorius trial (Behind The Door – Pan Macmillan)

Despite his high-profile successes, Nel’s career has not been without controversies. At the height of the Selebi investigation in 2008, Nel was sensationally arrested by the SAPS in a pre-dawn raid on his Pretoria home on trumped-up charges. In his patchwork jeans and short-sleeve collared shirt, Nel was hauled into court as an accused. The charges were withdrawn but Nel made a decision then that would come back to haunt him. He employed well-known baddy lawyer Ian Small-Smith to represent him. Small-Smith was the attorney for the self-confessed Kebble hitmen who were granted indemnity from prosecution by Nel and his team. The decision to cut deals with criminals in this case, in exchange for their testimony against Glenn Agliotti and Selebi, is still seen by the public as a blight on Nel’s otherwise impressive CV. Agliotti has no love for Nel, insisting he pursued him relentlessly just to secure the scalp of Selebi.

After he was arrested, the NPA was also forced to issue a statement answering allegations about Nel. They denied that Nel had ever been part of any “riot squad cases” during the apartheid years, as claimed in the media at the time. The organisation also denied he had ever been a member of the Broederbond or any secret right-wing organisation.

Over time, Nel has also found himself in the wrong “faction” of the NPA. He has a long running fallout with suspended deputy NDPP Nomgcobo Jiba. For years the two have run a low-level feud with one another. She blames Nel for the prosecution of her husband Booker Nhantsi and it emerged that she was instrumental in securing the warrant for Nel’s arrest.

As a result of their feud, Nel and his team spent several years languishing in a forgotten corner of the NPA’s Silverton offices quietly plugging away at cases, until the Oscar Pistorius trial came along, elevating the reserved, diminutive bulldog into the global spotlight. Nel, who is usually one to shy away from the media spotlight, revelled in the attention and at times was even accused of playing to the cameras. One senior counsel who regularly opposed Nel in criminal trials describes him as having SMS – short man syndrome – because of his enormous ego.

Post the Pistorius trial, with the pendulum of power at the NPA falling squarely back into the Jiba camp, Nel again found himself on the sharp end. Last year it emerged that the Hawks were gunning for Nel for his role in the controversy around the so-called ‘rogue unit’ at SARS. Two former unit members submitted statements implicating Nel, accusing him of paying nearly R1-million for spying equipment used to bug the NPA’s offices as part of an illegal operation, code-named Project Sunday Evenings.

With international awards on his mantelpiece and numerous successful convictions notched on his belt, Nel may well have been feeling despondent and deflated in light of the recent questionable decisions made by the NPA. There’s no doubt that public perception of the institution is at a low, in the wake of the botched prosecution of Finance Minister Pravin Gordhan. Nel has also expressed concern that the NPA is selectively prosecuting and is not doing so without fear or favour.

For a man whose integrity has been championed and who is deeply committed to the pursuit of justice, he may well have felt that he could better achieve those principles outside of the NPA. He has asked the public to judge him and his new unit at the controversial lobby group Afriforum on the work that they do. After what he has done for his country in pursuing justice during his career, we can afford him that indulgence. DM