Democracy Failure: Can civil society trump the system to Save South Africa? 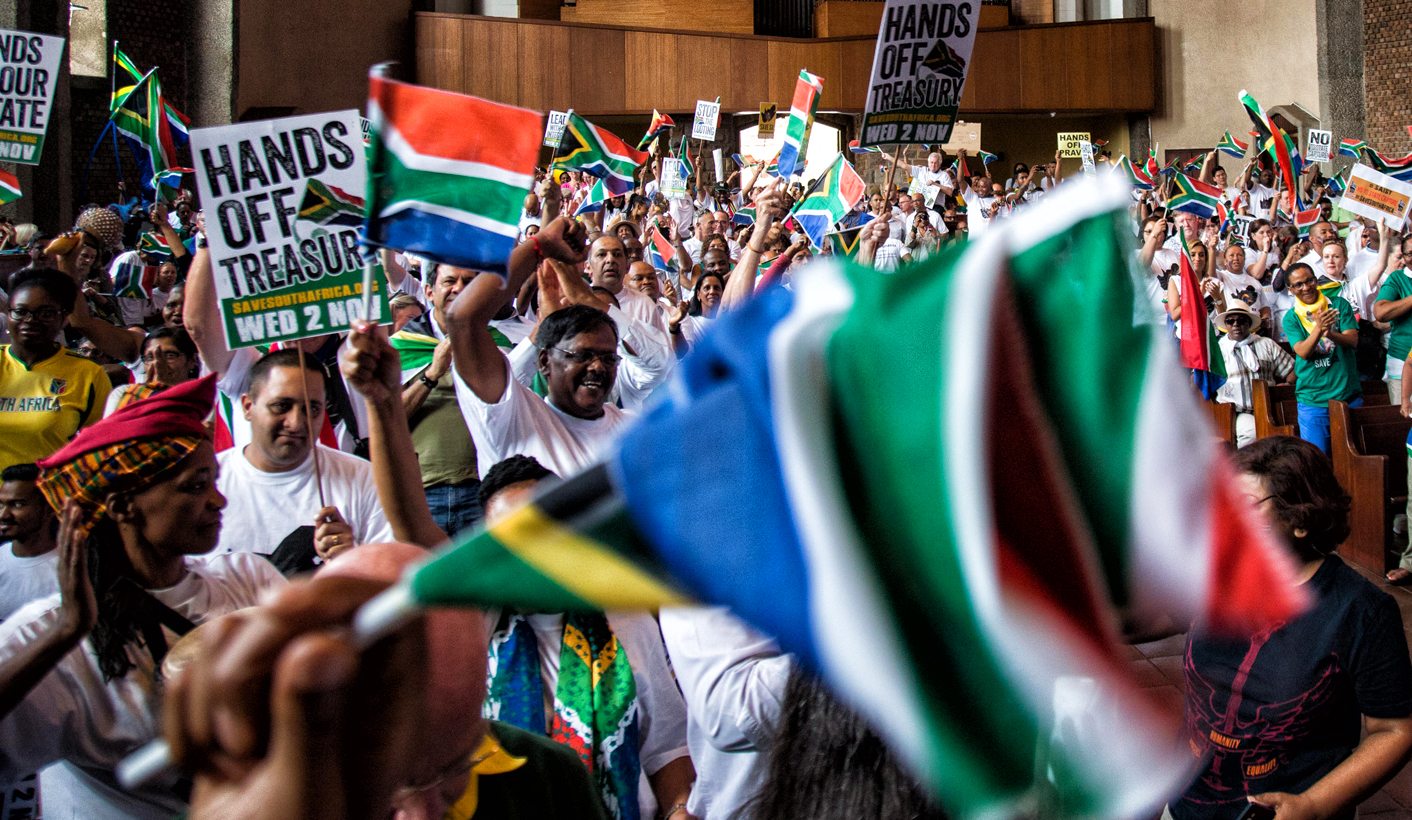 United States President Donald Trump, the biggest menace to humanity, has agitated a global awakening. Trump cannot be adequately challenged within the ambit of the US political system so the fightback is coming from ordinary people through mass protests and defiance campaigns. In South Africa, civil society organisations are also trying to colour outside the lines. Besides wanting to boot out President Jacob Zuma, Save South Africa says it wants to “delve into the imperfections” of how leaders are elected. And Afriforum has hired a big gun to pursue prosecutions outside the state. The political system as we know it is under attack – and maybe it should be. By RANJENI MUNUSAMY.

Remember the United Front? Not many people do. It was the civil society coalition initiated by metalworkers union Numsa as a mobilising front against government and the ruling alliance. It was to be the next big thing in South Africa – until it wasn’t. The United Front held a few protest marches that not many people bothered to attend and even tried to mutate into a political party in the Eastern Cape. It did not have much luck in last year’s local government elections.

Save South Africa has attracted some of the civil society organisations that were part of the United Front, such as Section27, Corruption Watch and the Organisation Undoing Tax Abuse (OUTA).

While Zwelinzima Vavi, him of the epic Cosatu battles, was meant to lead various Numsa initiatives that appears to be still languishing in the starting blocks, Save South Africa has one big asset that the United Front did not – a big personality as its figurehead.

Sipho Pityana has all the right credentials to lead the new civil society front. He has an impressive history in the ANC, worked as a senior official in government and now serves as chairperson of the Council for the Advancement of the South African Constitution (Casac). He is also a respected businessman.

When Pityana spoke at the funeral of ANC veteran Makhenkesi Stofile last year, he captured the concerns of many people in the ANC and the country. He talked about the shame President Jacob Zuma had brought by violating the Constitution and failing to lead with integrity. People paid attention because of who he is and what he said.

When Save South Africa launched three months ago, the campaign caught fire as it took on a big issue that many South Africans were worried or angered about: the hit on Finance Minister Pravin Gordhan. Save South Africa was at the forefront of the protest action against the attempt to charge Gordhan so that he would be removed him from his position and the National Treasury captured.

But the campaign’s main target is Zuma. They have a running no-confidence motion against the president and believe that he is the primary reason for the country’s state of decline.

Business leaders, who are generally hesitant to participate in protest action, particularly targeted at government, rallied behind the initiative. Besides participating in the march in support of Gordhan, business leaders are providing financial support to Save South Africa. According to Lawson Naidoo, one of the campaign’s leaders, Save South Africa will be disclosing all its funders publicly to ensure full transparency.

But where is Save South Africa going? At an editors’ breakfast in Johannesburg on Tuesday, Pityana said the direction depends pretty much on the moves Zuma makes next but insists that Save South Africa is not and does not want to be a political party.

“We are a counter-veiling force to those who are intent on undermining our democracy,” he said. And dislodging Zuma was necessary to discuss the quality of leadership needed to restore integrity to the ANC and government.

“We do not believe that removing Zuma is the silver bullet that puts an end to the rot. But it is the beginning of unraveling the corruption, reversing state capture, restoring the integrity of the state and embarking on a new trajectory,” Pityana said.

But here is where it gets tricky.

Pityana says they want ordinary citizens to have a say in how leaders of political parties are elected. While the ANC is the main focus, he said there should be scrutiny of all political party election processes. Because of the roles they play in the state and in Parliament, including voting to elect and fire the president, citizens should be involved to ensure leaders with the “correct profile” are chosen.

At this point, you imagine the giant spectre of ANC secretary general Gwede Mantashe appearing and rumbling:

“You cannot dictate to the ANC how it should elect its leaders. That is an ANC process! If you want to participate in electing ANC leaders, join a branch!”

The ghosts of Gwede past, present and future would be right. It is the ANC’s business and it is quite rich for people outside the organisation to prescribe who is capable and appropriate to lead it.

The problem, of course, is that the ANC’s long-standing electoral process led to branches and structures electing someone of Zuma’s calibre as president. Twice. And they have no practical mechanism to hold him to account for his leadership failures. The ANC process is also open to manipulation through gatekeeping of branch membership, voting according to factions and slates, and vote buying.

The ANC is now trying to counteract tampering of the will of the branches by higher structures of the party. Mantashe told a media briefing on Monday that branch nominations for leadership positions would go directly to the electoral commission in sealed envelopes instead of being channelled through the ANC structures.

Pityana says this is a step in the right direction. The ANC’s assertion that leaders should undergo lifestyle audits was also an acknowledgement of the prevalence of corruption. But, he says, the electoral process should be opened up further with more debate and scrutiny from ordinary citizens.

Save South Africa wants to promote an active citizenry by helping people know their rights and responsibilities. Engagement should go beyond social media commentary into the streets, he said. Save South Africa is holding a series of townhall meetings across the country to tell people why Zuma is a bad leader, explain what state capture is and how corruption affects everyone. They are also promoting an understanding of ethical leadership so that people insist that only those who are fit and proper should be elected.

The fact that this is taking place in the year of the ANC’s elective conference raises suspicion that Save South Africa might be trying to lobby for certain leaders to be elected. Pityana says their concern is what kind of people are elected into the leadership positions, not which candidates. But with the high-stakes leadership race underway in the ANC, it is virtually impossible to filter out the personalities and only talk about ideals.

Save South Africa will be holding a demonstration on the eve of Zuma’s State of the Nation Address in Cape Town next week where they will present an alternate version of the state of the nation. They also plan to hold a national convention later in the year and are engaged in a process to ensure that the nuclear deal does not go ahead.

Save South Africa’s approach is quite different to that of a group of ANC veterans who are also concerned about the leadership crisis and state of their organisation. The veterans are working in tandem with the ANC leadership and are trying to stay within the confines of the organisation’s rules and processes. Save South Africa is mobilising society outside the ANC to impact on the internal workings of the ANC.

But the fluidity of society and corrupting of the political system could mean that people are forced to play outside the rules.

Afriforum caused a sensation on Tuesday after it emerged that high profile prosecutor Gerrie Nel had resigned from the National Prosecuting Authority (NPA) to work for the Afrikaner lobby group as part of a special unit to pursue private prosecutions. This is as a result of the NPA becoming ineffective and corrupted by political agendas. While it calls itself a “civil rights organisation”, Afriforum has acted as a special interest group for white people, particularly Afrikaners. It remains to be seen whether Nel’s new role will benefit broader society or fit into Afriforum’s usual agenda.

Organisations such as OUTA and Section27 have shown in the past how civil society interventions can impact on government processes, particularly when the state system is weak and failing. The “Fees Must Fall” uprising forced government to confront the neglected issue of education funding by bringing the higher education sector to its knees.

Save South Africa now wants to open a new frontier of challenging the elected leadership and opening up the protected territory of leadership elections.

Are we veering into the realm of undermining the democratic system? Perhaps.

But in a world where Donald Trump was elected democratically, has introduced a new order based on alternate facts, and is threatening global security, perhaps the system could only be saved by being shattered first.

The democratic edifice is already crumbling and organised politics no longer makes sense. A clash between the political elite and civil society might therefore be inevitable. It seems we are already on the way there. DM

Photo: Supporters of the Save South Africa movement listen to speeches in St Albans Church in Tshwane, 2 November 2016. (Greg Nicolson)