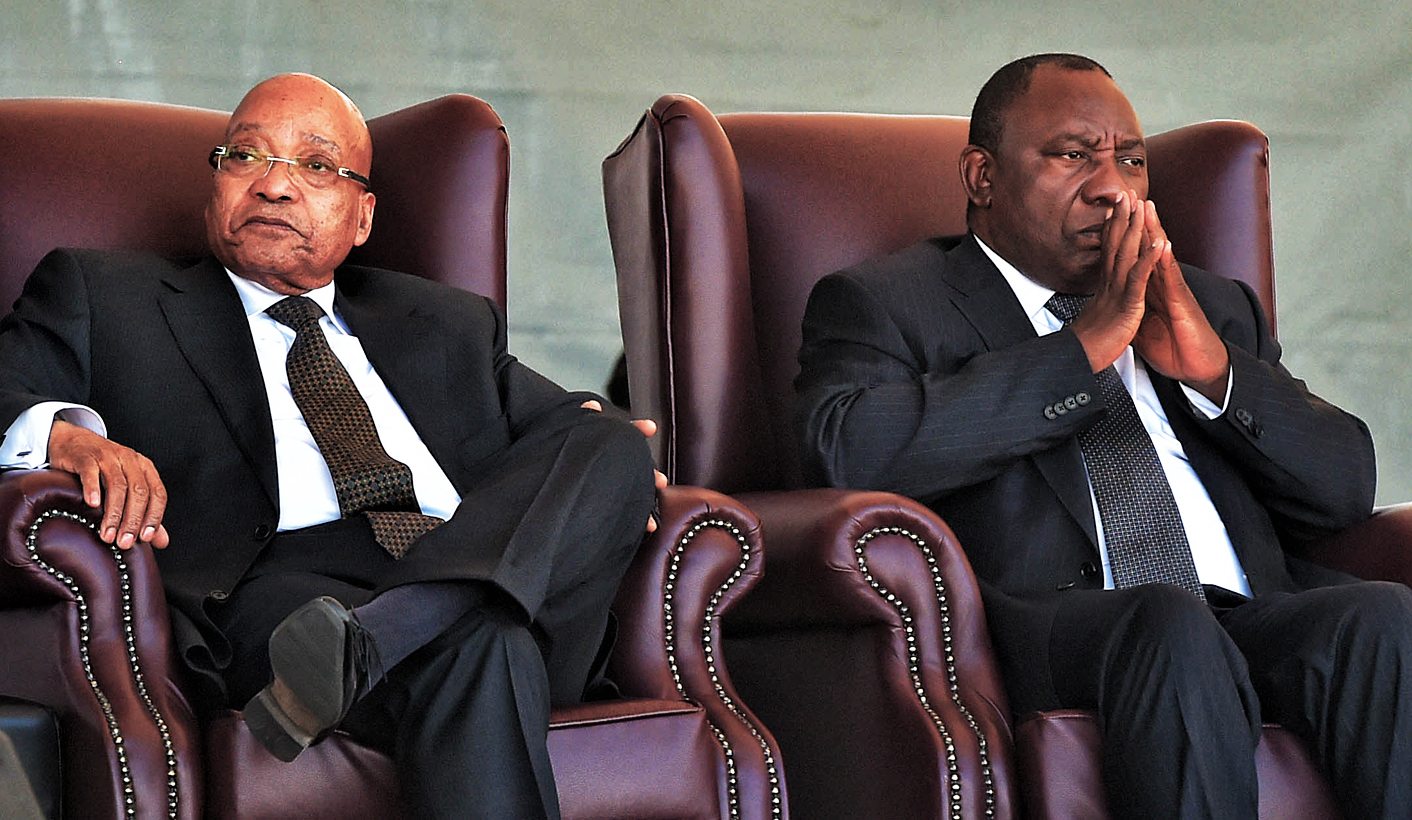 In the run-up to the ANC’s leadership conference at the end of this year, most of the conversation so far has focused on who will win that election. This is understandable, and it makes sense: that person may change the direction of the ANC, and probably of the country. But this focus risks missing a much bigger question – whether or not the ANC will actually be able to function as a comprehensive, united, political party after this conference. An examination of the current dynamics and, in particular, the interests that are at play, could suggest that the chances of the ANC fracturing in some fundamental way are actually much higher than they may currently appear. By STEPHEN GROOTES.

Just before the 2016 local elections, SACP general secretary Blade Nzimande made the point in an interview with EWN that the previous leadership elections had badly damaged the party. He went on to say that this time around is so far no different, adding:

“Each time this battle is over, we have a Cope, we have an EFF. For how long will us, as the ANC, as the movement, afford this kind of breakaway? How do we know that next time around it won’t be a breakaway but an implosion of the organisation?”

To put it more plainly, Nzimande was surely saying that if there is another Polokwane-style election, with winners and losers, the ANC would be at risk of a much bigger fracture than it has suffered up until now.

Since that interview, other people, several of them senior leaders within the ANC, have made the same point. It’s not rocket science, this. Each time it appears that tensions within the party rise, the stakes are so high that people fight incredibly hard, and then there is nothing in it for the loser.

At the moment this current leadership contest within the ANC is being discussed mainly in terms of names. These names stands for certain factions and groups, and interests. Nkosazana Dlamini-Zuma appears to be the symbol of the people who currently want to retain President Jacob Zuma at the Union Buildings, it appears the people who back her are from the rural provinces, and of course this includes the group known as the “Premier League”. Cyril Ramaphosa appears to have the support for the urban areas, in particular Gauteng, and then the more reformist groups within the ANC and the Alliance. It is important to mention that this is necessarily an over-simplification. There are groups that swing between the two, others who may support another candidate entirely, or those who simply have not yet decided who would they back.

There have been suggestions that the only way around this is for some form of compromise. Perhaps Ramaphosa would accept Dlamini-Zuma as Deputy President, or the other way around, or they could create some kind of “dream ticket”. Or, perhaps, they should both stand aside in favour of someone like Zweli Mkhize, or even, say those who think rather radically, a new generation in Gauteng premier David Makhura. These are all sensible suggestions. They all have strengths and weaknesses, and all would be ignored at their own peril by the people who make these decisions.

But if we remove the focus on names, and look towards the interests of these two groups, it would appear that the chances of a compromise are actually rather small.

In the case of the Dlamini-Zuma group, there is a strong case to argue that they have two main priorities. First, they want to keep the current financial taps running, in the form of patronage. Imagine what would happen to someone like David Mabuza in Mpumalanga were he, and those around him, suddenly to be out of political power. It is probably all he’s ever known. Without political power he would have very little to fall back on. This is often the case for ANC office-bearers. Often it’s because of our history, but there are many people who have only ever been in politics. They need to make sure that the system that served them so well up until now keeps on giving. This means they will fight hard against any kind of reformer who would threaten those networks.

Then there is the situation around Zuma himself. We are all aware of his retirement problems, and the spectre of jail time that those pesky 783 corruption charges could bring. This group has tended to support Zuma in the past, and they would presumably move heaven and earth to protect him. Which surely means ensuring that his ex-wife (and, according the Sunday Times, regular co-habitant at Nkandla) takes over after him. This means that for this group, it could well be a fight to the death.

But it is not much different for the group around Ramaphosa. They may well believe that they are fighting for the soul of the ANC. They are probably not wrong. And if they lose, the party’s grip on its moral compass will become even less sound, with dramatic consequences for the ANC in the run up to 2019, and for the country as a whole. They would surely believe that with someone so closely linked to Zuma in charge for another five, or possibly 10, years, the ANC would not survive. So, they have to fight incredibly hard as well.

This means that for both sides, as long as they believe the other side’s win will spell disaster and if they have even the smallest chance of winning in December, they will have to fight on.

It is almost certain there will be the Winner and the Loser.

The question then is what happens to the loser? In 2007, at Polokwane, the “losers”, the faction that supported Thabo Mbeki, did accept defeat. Some of them did break away to form Cope, others stayed within the party. But then, there seemed to be far more common ground between the two sides; it was not a fight to the death, and money and patronage perhaps did not play the central and decisive role then that they do now. And those who lost, who accepted defeat, could imagine a life for themselves within the ANC being led by Zuma. Those who lose this time around may well feel that there is no life for them within an ANC being led by the faction they lost to. Were the Dlamini-Zuma faction to lose, the years of patronage might be over; were the Ramaphosa faction to lose, they might fear the ANC was about to turn into a generally corrupt organisation.

With such high stakes, both sides could refuse to accept defeat.

Imagine for a moment the climax of the conference, with several thousand ANC delegates inside the main hall (probably at Gallagher Estate), at that moment the ANC does not have a leadership, when the independent electoral officials are in charge. There is likely already to be pandemonium in that hall. There may already have been fights over accreditation for delegates. What happens when the results are announced? Those who win will celebrate, publicly, right in front of those who lose. Will those who lose just sit there and take it? Or could they react differently?

In situations like this, leadership would be incredibly important. The person who won would have to jump onto the stage immediately to make a speech essentially reaching out to the supporters of the person who lost. It is possible to see Ramaphosa doing this, just perhaps. But Dlamini-Zuma has shown very little evidence of being able to judge a moment like that and take the initiative, and then reach out to the people she has just defeated. And even if either of them were able to grasp this incredibly difficult nettle, in the heat of the moment, would they even be believed? After a political battle perceived as dirty, and perhaps won by crook, probably not.

Then what happens after that? Do some delegates, representatives of branches in fact, just walk out, perhaps never to return? Do others try to make peace with the idea of losing, of what they believe their party might become? Or do they continue the fight, just in another arena, by leaving and starting something of their own?

The way this fracture could occur may not even mean the formation of a new political body, it may just mean that so many people who are a part of the ANC just leave the organisation, that its character changes fundamentally, and that in fact we are left with something very different, and much smaller, to the ANC of early 2017.

We know it is still way too early to predict what will happen in December. But the longer this current situation continues, where there’s a protracted battle between two starkly different camps, the greater the chances of the ANC suffering a massive fracture. As yet, despite Nzimande’s warning, no one seems to be working to stop this from happening. DM