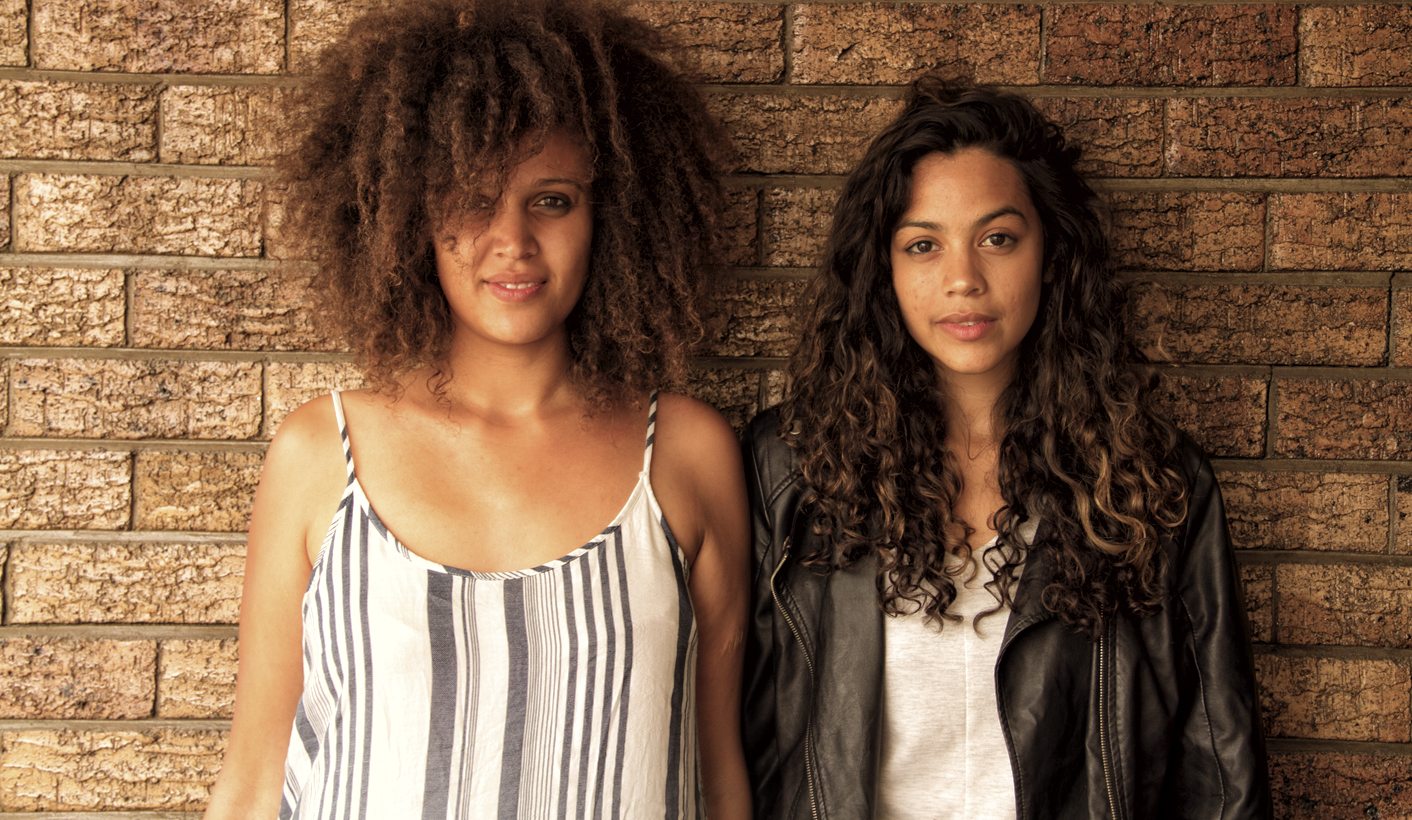 Still reeling from the buzz attracted by the launch of their web series ‘Coloured Mentality’, filmmakers Kelly-Eve Koopman and Sarah Summers are preparing to walk 1,000km from Fort Beaufort in the Eastern Cape to the Castle of Good Hope in Cape Town – the annual Indigenous Liberation Walk arranged by Khoi activists. The walk, which sparked the documentary series’ search for what it means to be a coloured person, kicks off in February. In the meantime, the filmmakers have just completed their second episode. They spoke to MARELISE VAN DER MERWE.

Episode Two of Coloured Mentality tackles one of the more loaded questions raised in the first episode: whether Afrikaans is a “white language”.

“My Afrikaans sucks,” Summers admits cheerfully. She herself did not grow up speaking Afrikaans at home; neither did Koopman. But the subject of language is a deeply emotive one for the participants in the web series.

“Wil jy hê ek moet vloek?” [Do you want me to swear?] asks actor Irshaad Ally, confronted by the idea of Afrikaans as a white language.

Radio presenter Sherlin Barends states, adamantly, that she is proudly Afrikaans; actress Crystal-Donna Roberts alludes to the language’s slave influences; actor Barend Daniels points out that there are fewer white Afrikaans speakers than non-white ones. Writer Amy Jephta speaks of the distress of being told you are speaking a colonial language when you are speaking a language you have spoken all your life, “live and breathe”, and regard wholly as your own. Actor Cedwyn Joel echoes this, speaking of the pain of others attempting to estrange you from the way in which you express everything you are.

The second episode is, like the first, just a few minutes long. But it touches nerves. Speaking to Daily Maverick before its release, the filmmakers had this to say about why.

[Ed: At the filmmakers’ request, their answers are annotated as from both of them.]

DM: A 1,000km walk is quite an undertaking. But (in my experience) also meditative, empowering, enormously difficult, and extremely surprising. What made you choose walking as your medium of activism?

This is an annual walk led by Khoi Activist. They are mentoring and guiding us through the politics, spirituality and culture of the Khoi identity during this pilgrimage. Indigenous culture was destroyed by colonialism and continues to be relegated. It’s terrible that as a group carrying a First Nation ancestry, this is something coloured people can’t easily access.

We also anticipate this to be a transformative space for us. We were both brought up to believe that we have the power and responsibility to initiate change. We seek experiences that will guide and ground us in this pursuit. The walk has always been perceived to be a spiritual exploration of ourselves to figure this out. Travelling throughout South Africa and connecting with the various communities we meet will be a formative experience in how best we choose to use ourselves.

DM: I’m going to ask you what you asked others: what does it mean to be a coloured person?

The point of the platform was never to define this. We didn’t start this platform because we have the answers, we started it because we were looking for them. Like us, many people struggled to understand their identity. A big reason for this is the stigma and stereotypes associated with the term. Further, the term “coloured” is easily problematised because it was a product of apartheid and a tool to stratify black people.

But this discourse can be elitist and undermines the lived experience of the masses of people who identify as coloured. We wanted to initiate a safe and inclusive space for people who recognise this identity as their own. We wanted to engage with the various complexities that form part of the conversation, without isolating anyone who has a say on the matter.

DM: What surprised, concerned or moved you most when you conducted your interviews?

“What do coloured people have to be proud of?” – I think this is a controversial question because we are often warned against fostering a detrimental kind of nationalism. What struck us further was that it was a difficult question for people to answer. Interviewees would begin with the stereotypes and shame associated with the term “coloured” before they could actually answer the question. We also recognised an imbalance in the way the identity has been publicly perceived. While people readily accept and consume certain unflattering versions of coloured people in media spheres, notions of pride are problematised.

This creates an inequity between the accepted representations of coloured people, and an aspiration to transcend these stereotypes without disassociating from “colouredness”. People need to see themselves represented in their leaders.

DM: Identity is (I think) not homogenous – it’s a very individual and personal thing – so I’m interested in your individual experiences, and as I understand it this process was also in part introspective for you. Did you learn anything about yourselves or each other that surprised you?

We have released a web series on Facebook that documents our personal journeys in the pursuit of understanding ourselves, our heritages and our identities. People have taken ownership of this because they share this desire.

This has happened fast. We have spent the last year focusing on our goals and are grateful to see these pursuits validated. Witnessing each other’s growth in strength and character feels both affirming and terrifying. We want to share this experience. The documentary will be with us during this transformation. We hope this will be powerful to watch. We want to share our lessons.

DM: One of the reasons this conversation seems to have such relevance, I think, is because what it means to be a coloured person differs from person A to person B and there are so many different threads, experiences, and aspects of identity that haven’t been publicly explored yet. Would you agree?

These ideas have been circulating in the news, in the academic and activist sphere and in film for a long time. We are not the first, we are not experts and we see ourselves and our platform as a gateway to an extensive and limitless public discourse.

I think the success of the series is directly related to the fact that people have been considering all of this and are ready to engage. The consciousness has been growing. We don’t shy away from controversy either. Coloured Mentality has become a meeting place of people that debate among each other, share stories and information, and tread the difficult terrain together. Perhaps this is why the page is powerful.

DM: You put out a call for people to Whatsapp videos to you on your Facebook page. What was the response like?

Not big at all. Perhaps people are considering their answers before sending it to us. I think putting yourself on a public platform can be intimidating. We hope that more people will send their videos though, because we would like the platform to be as inclusive as possible. We encourage anybody to send a video in any language.

DM: What haven’t I asked that you want to add?

The Indigenous Liberation walkers will be hosting an exhibition at Unknown Union to raise funds for a support vehicle. We invite people to come and learn more. There will be live performances as well. Art will be sold but smaller donations are also highly appreciated.

Kelly-Eve and Sarah in a nutshell

Daily Maverick gave them a word or phrase only and they responded.

Coloured Mentality: A web series that rejects the stereotypes that have come to define “typical coloured mentality”.

What needs to be said: We release one episode a week. The conversation is going to become a lot more difficult. We are not avoiding controversy; we have also attempted to venture into these topics with great sensitivity and thoughtfulness. We hope people will continue to contribute respectfully.

We are truly overwhelmed by how people have been taking ownership of the platform. We are also really grateful to the network of powerful women [who] form part of the inner circle that support and ground us. And to our families, who taught us to be powerful. DM