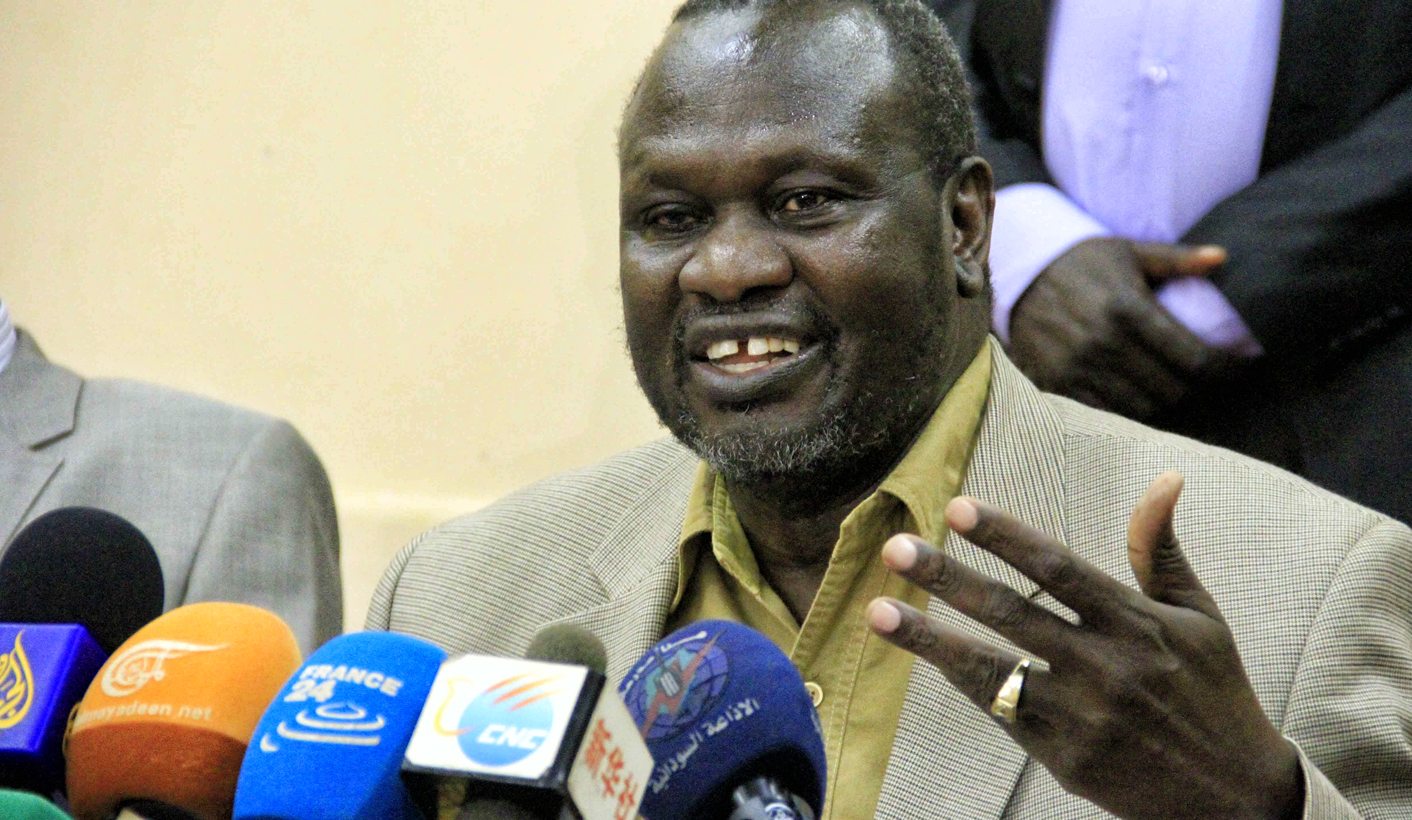 Is Africa, yet again, backing a ‘power sharing’ deal that in reality completely favours the incumbent? By Peter Fabricius for ISS TODAY.

Is Pretoria advancing the faltering cause of peace in South Sudan by keeping veteran opposition leader Riek Machar under “house arrest” in South Africa? Not everyone thinks so.

Two weeks ago when he tried to return to the region, Machar was denied entry by Sudan and Ethiopia, officials say. Both countries were traditionally hospitable to him but the multinational agreement aims to keep him out of the region and well away from South Sudan so that he can’t meddle in its affairs and frustrate peace efforts.

Machar fled South Sudan for his life in July amid the renewed fighting between his forces and those of Kiir. Violence had erupted after Machar eventually returned to take up his assigned position as first vice-president in the transitional power-sharing government established under the August 2015 peace deal.

Machar found his way to South Africa in November. Meanwhile he was replaced as first vice-president by Taban Deng Gai, a fellow ethnic Nuer and member of Machar’s SPLM-in-Opposition (SPLM-IO) faction.

The South Sudanese government and Pretoria justify keeping Machar on ice in South Africa by saying that it was the SPLM-IO itself which replaced him as leader. But this is a questionable proposition, at best. Some members of SPLM-IO backed Taban but not most, says Lauren Hutton, a South Sudanese analyst. She points out that the SPLM-IO has formally re-affirmed Machar as its legitimate leader, and that most members of this party/faction regard Taban as a collaborator and sell-out.

And some members of the international community with an interest in South Sudan strongly disagree with the US-led policy of excluding Machar and putting pressure on regional states like Ethiopia, Sudan and Kenya not to host him.

“There will be no peace if it’s not ‘approved’ by Machar and his Nuer following, nor without Sudan,” said one senior official.

But how do the peacemakers circumnavigate the problem that Machar and Kiir are anathema to each other? It was after all the personal rivalry between them that sparked the civil war that erupted in December 2013 and which has caused so much death and suffering since.

Ideally, both Kiir and Machar should be extracted from South Sudan to give peace any sort of chance. That was part of a radical solution proposed earlier this year by Princeton Lyman, former US Special Envoy to the Sudans and now senior adviser to the president of the United States Institute of Peace along with Kate Almquist Knopf, director of the Africa Center for Strategic Studies at the National Defence University in Washington.

They controversially proposed that not only Kiir and Machar but all the South Sudanese leaders should be cut out of the equation because of their dismal performances to date and that South Sudan should be placed instead under UN and African Union (AU) trusteeship to put it on its feet before handing it back to the South Sudanese to govern.

Lyman and Almquist Knopf also proposed that the current, rather inept, UN peacekeeping mission, UNMISS, should be replaced with a smaller, more agile international force with a robust mission – like that of the Force Intervention Brigade in eastern Democratic Republic of the Congo (DRC) – to forcefully take on peace spoilers.

Most commentators have found this proposal too large to swallow, not least because it obviously smacks of neo-colonialism but also because of the practical difficulty in persuading or forcing Kiir to surrender power and walk away from his country forever.

On the other hand, extracting only Machar from the problem is clearly not acceptable or helpful either.

And so it looks, yet again, as if Africa is backing a so-called “power-sharing” deal that in reality completely favours the incumbent.

Solomon Dersso, an analyst on African security issues, says “it is now widely recognised, albeit belatedly, that the relationship between Kiir and Machar is broken beyond repair and any transitional process that is premised on the coalition of the two is doomed to fail”. So there is some point in keeping Machar away, he says.

But he adds that the way Machar was replaced “was not in accordance with the terms of the August 2015 agreement, despite government and some SPLM-IO members’ claims to the contrary. It is thus no surprise that there are many in IO and members of the Nuer community who still consider Machar a leader.” And who justify continuing to fight, on the grounds that their leader has been illegitimately debarred.

The August 2015 peace process can’t be considered to be alive “when only one side is fully involved and only one side cherry-picks what and how to implement various elements of the peace agreement while frustrating or dismantling many other important parts of the same,” Dersso says. If Machar is to be replaced, this should only be done with the full engagement of all the SPLM-IO leadership, he adds.

Alex de Waal, head of the World Peace Foundation, has said that in removing Machar from the vice-presidency unilaterally, Kiir violated the AU’s prohibition against unconstitutional change of government and so the AU should suspend South Sudan.

He has also said the AU’s Constitutive Act permits forcible intervention in the case of genocide, crimes against humanity or war crimes. Many observers, including the UN Commission on Human Rights in South Sudan, headed by South Africa’s Yasmin Sooka and Adama Dieng, UN Special Advisor on the Prevention of Genocide, have recently warned that the current violence, much of it inter-tribal and increasingly directed at ethnic cleansing, is sliding towards genocide.

“The stage is being set for a repeat of what happened in Rwanda and the international community is under an obligation to prevent it,” Sooka said on 1 December after visiting South Sudan with her commission.

But the AU and the international community seem paralysed. At the November Addis Ababa summit of countries volunteering troops for the African Capacity for Immediate Response to Crises (ACIRC), South African President Jacob Zuma and Ugandan President Yoweri Museveni stressed that ACIRC was necessary to prevent genocide and other atrocities on the continent. But there are no signs that it will be deployed in South Sudan where it is sorely needed.

The UN Security Council has agreed to inject an extra 4,000 troops, mostly African, into UNMISS but with a special robust mandate to aggressively take on any South Sudanese forces frustrating peace. However, Kiir is stalling and deployment does not seem imminent.

De Waal has proposed that such a force should take control of the capital Juba and create within it “a protected space for political dialogue, civic dialogue, where all South Sudanese civil and political forces can be represented in a nonviolent manner. And on that basis, then [they can] begin a process of national political dialogue and nation-building, backed by the military force of neighbouring countries.”