Channelling Mandela: Ramaphosa and Kathrada’s truths of our time 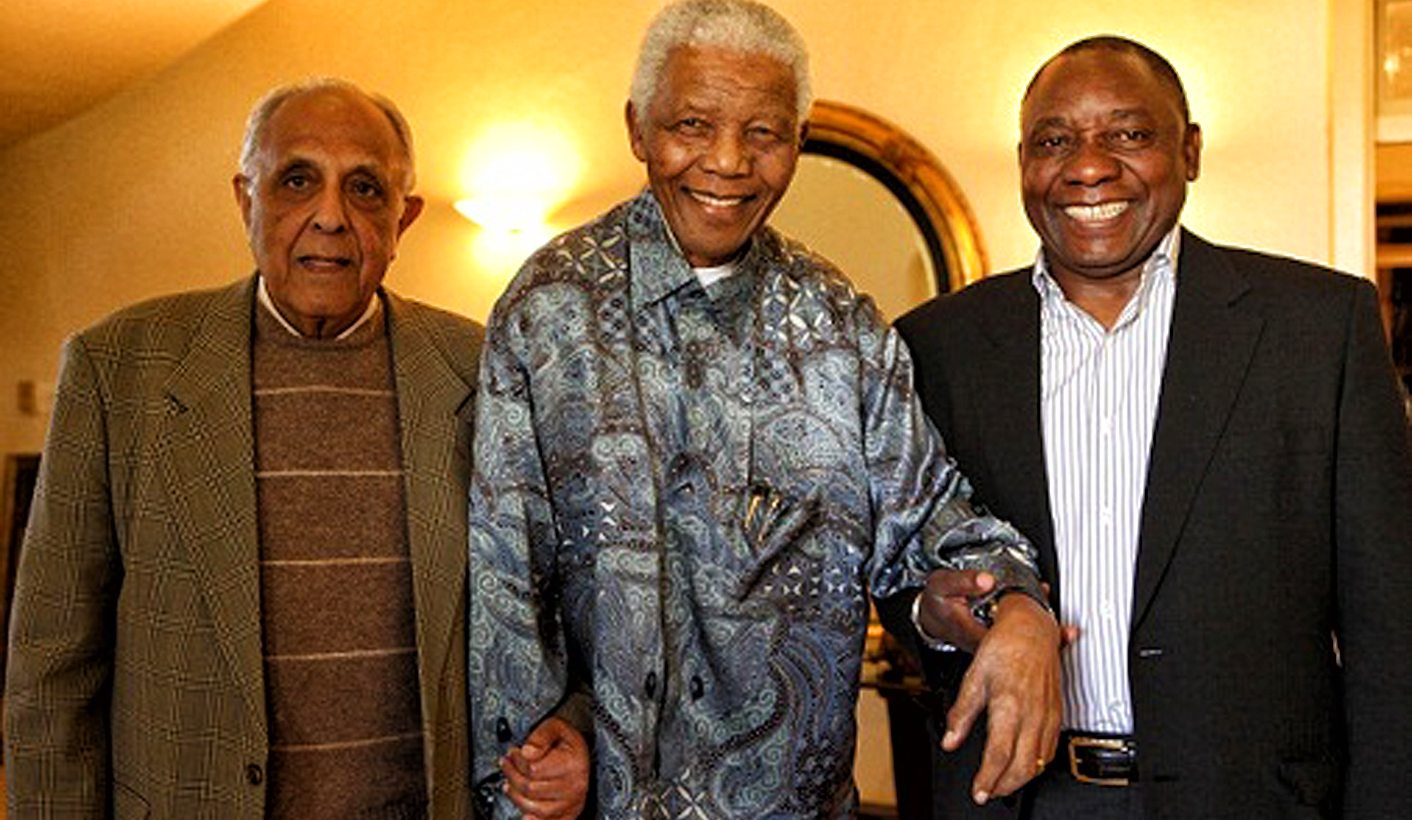 Consider this: If things went differently at the recent ANC national executive committee (NEC) meeting, Cyril Ramaphosa would now be President of South Africa. Ramaphosa would have been the most obvious candidate to step into the breach had the NEC decided to recall President Jacob Zuma. Although Ramaphosa still insists on flying below the radar, he must now know how close he is to the top job – if the Zuma camp does not crush him. On the third anniversary of Nelson Mandela’s passing, Ramaphosa delivered a thinly veiled analysis of the state of the nation. ANC stalwart Ahmed Kathrada was a lot more forthright. By RANJENI MUNUSAMY.

Some people, including those in the Cosatu central executive committee, believe that Deputy President Cyril Ramaphosa is the safe choice to take over from President Jacob Zuma.

Well, how would we know?

Ramaphosa has given South Africa very little hint of what he stands for and what kind of president he could be. All we have to go on is conjecture, the fact that he is not Jacob Zuma, and he was the favourite of Nelson Mandela 20 years ago when the former president preferred Ramaphosa to succeed him. In May 1996, Ramaphosa resigned as ANC secretary general and from Parliament after it became clear that Thabo Mbeki would become president of the ANC in 1997, and president of South Africa in 1999.

Back then, Ramaphosa was still close to his trade union roots, was in control of ANC structures by virtue of his position as secretary general and was the guy shadowboxing with the National Party and other opposition parties as leader of the constitutional negotiations. He was an open book and constantly in the media. It was well known that Mandela admired him but was overruled by the rest of the ANC to choose Mbeki as his deputy.

When Ramaphosa quit active politics, he remained a member of the ANC NEC but virtually disappeared from the public eye. Since his election as ANC deputy president in December 2012, he has said and done little to reflect his own views and has toed the party and state line. He has been careful not to be seen to be competing with or eclipsing Zuma in any way.

But what is the point of that anymore? The ANC maintains its antiquated tradition of people not campaigning for leadership positions to its own detriment. The fact that it has recalled one president and has had an intense debate about getting another to step down is testament to the fact that there are defects in its leadership selection process that does not allow a thorough interrogation of the candidates before they are elected.

Clearly the ANC needs to reform and modernise its system as the reliance on people’s struggle credentials and popularity amongst the dominant faction is not good enough, not anymore. Campaigning for positions is not a disciplinary offence – it is simply frowned upon internally as people are seen to be too ambitious. But when you consider the smorgasbord of offences committed by the incumbent, including bringing the ANC into disrepute, all of which has been excused by the organisation, it seems nonsensical to abide by an archaic tradition that is self-defeating.

On Monday, Ramaphosa delivered the keynote address at a memorial dialogue hosted by the Nelson Mandela Foundation on the third anniversary of the elder statesman’s death. He ventured to speak about the “unease” in the political sphere and said the “fault lines” that have appeared could not be ignored.

Although still nuanced, Ramaphosa was acknowledging the leadership problems – something Zuma refuses to do. When Ramaphosa last spoke out, at the funeral of ANC veteran Makhenkesi Stofile in August, he said government was “at war with itself”. A few weeks later, this statement was contradicted by Zuma. Responding to a question in Parliament from Democratic Alliance leader Mmusi Maimane, Zuma said the statement had been made by an “individual” and denied there was a war between state institutions.

Ramaphosa hit the deck thereafter but this week he spoke out again. “Where there is no meaningful engagement, where those in positions of responsibility do not listen to the cries of the people, then the seeds of discontent, of instability, of conflict are sown,” he said at the Mandela memorial event.

While he spoke about the need for unity in the ANC, he said this was not the same as “closing ranks”.

“Unity is not a conspiracy of silence in the face of misdeeds. Unity is not an excuse to avoid the difficult, painful questions that we need to ask ourselves.”

Speaking about the moral tenets that guided the ANC’s previous leaders, Ramaphosa said this was a moment for the nation to turn once again towards Madiba for inspiration, for guidance, for lessons in leadership.

“Now more than ever, we need leaders of his quality and integrity, leaders who are committed to serve only the interests of the people. We have to ask ourselves uncomfortable questions such as ‘Does South Africa today have such leaders?’ Does our movement have such leaders? Are we living up to the example that Madiba, Tambo, Sisulu and Luthuli set?”

There was an undeniable subtext to Ramaphosa’s speech, including his declaration that this was “a moment for action”.

“We want a society where leaders regard themselves as servant leaders rather than leaders who shout ‘follow our lead’.”

This was as close to a stump speech you can get from a candidate vying for the top job in the ANC.

Mandela’s close friend and fellow treason trialist Ahmed Kathrada does not need to be nebulous in his commentary. In an opinion piece in memory of Madiba, Kathrada said it was natural to ask how the former president’s example could be applied to a contemporary setting.

“South Africa currently finds itself on a precipice. It can either fall headlong into a political quagmire, characterised by heightened socio-economic turmoil; or it can back away from the cliff, look at the leadership examples of its predecessors and find safer, common-sense ways to ‘cross the gorge’.”

Referring to Mandela’s role in overturning government’s previous opposition to antiretroviral treatment for HIV and AIDS, Kathrada writes: “It takes a special type of leader to admit to his faults, and admitting to not doing enough to combat the epidemic during his time as president is exactly what Mandela did. But, it takes a remarkable individual to break-ranks, stare down dominant views, and face being unpopular amongst ‘one’s own’.”

“It is safe to say that his views were anything but popular amongst some within the ANC’s National Executive Committee (NEC) at the time.”

“Mandela may have been a popular leader, but his agenda was never driven by populism. He scrupulously ensured that all his utterances and actions as President of the ANC and as the first President of the new non-racial, non-sexist, democratic South Africa were consistent with the Constitution and policies and activities of the party and government. During his tenure as President, Mandela set numerous landmark precedents, respecting and complying with the rule of law.”

Then the coup de grâce.

“I am heartened that South Africans have heeded the call to support initiatives like the Save South Africa campaign, and that veterans of the ANC, and more recently, some of its Umkhonto we Sizwe cadres, as well as members from within the NEC, have begun to take positions that may not be wholly popular. Like Mandela, I believe that their ‘breaking of ranks’ in the interest of the betterment of this country, is a step that in years to come, will be appreciated – just as today we thank Mandela for his resolute stance on HIV/AIDS.”

Just in case there was any doubt about what Kathrada is saying, he rounds up his opinion piece as follows:

“Just a few days ago, I attended the launch of Save South Africa’s Motion of No Confidence in President Jacob Zuma. Drumbeats could be heard around Constitution Hill, where the event was being held. I am told that similar beats resonated at St Alban’s Church, where Save South Africa itself was launched. As we remember Mandela in death, it is precisely these rumblings that must roll on, heralding a more invigorated civil society and active citizenry that will hold government to account.”

“It is these drumbeats that I think Madiba would have wanted to hear.”

Maybe Ramaphosa and Kathrada are right that South Africa does need to look back to find our way forward. There is no way of knowing for sure what Mandela’s views on the current crisis would be and it is rather tragic that, three years after his death, his legacy is fading from the public mind. With democratic South Africa being so lost now, we need to rediscover our true north again. DM

Surviving the stress of Covid-19 (and everyday life): It’s okay to not be okay