GroundUp: Hearings on Khoi San Bill held with no translation into Khoi and San languages 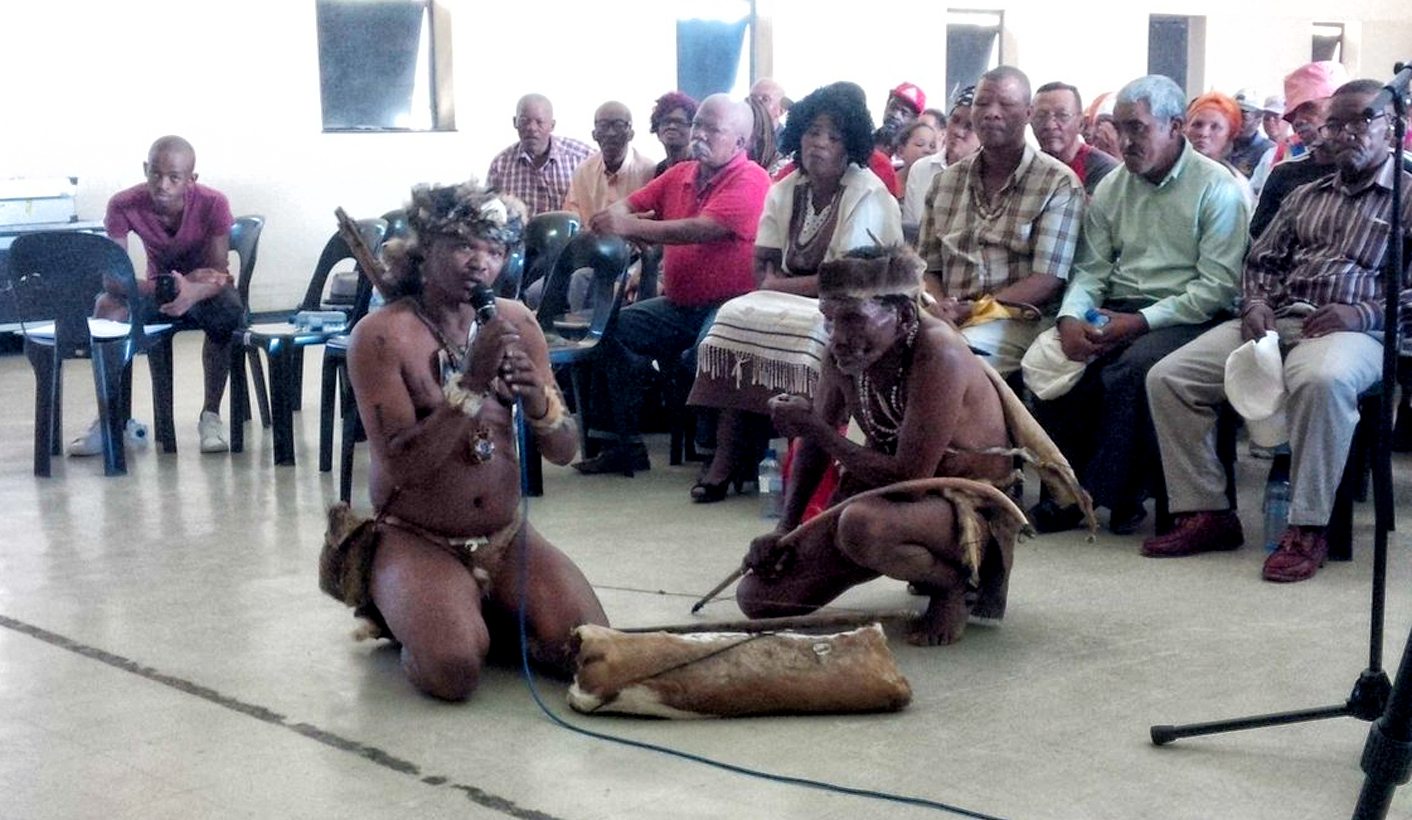 A disturbing pattern emerged from the public hearings on the Traditional and Khoi San Leadership Bill, writes Nolundi Luwaya for GROUNDUP. For one thing, no attempt was made to provide translation into any of the Khoi and San languages – or even into Afrikaans.

Public hearings held by Parliament’s Portfolio Committee on Co-operative Governance and Traditional Affairs on the Traditional and Khoi San Leadership Bill in the Northern Cape this week got off to a cynical start.

A pattern emerged from the first four hearings in Kimberley, Kuruman, Upington and Springbok. There was no provision made for translation services, not even into Afrikaans, let alone Khoi and San languages. Yet member after member of the Khoi and San communities who spoke stressed that recognition of their language and their culture were key priorities. Recognition of their language must precede recognition of leadership and structures, they said, because a people without a language and culture are not a people, even if they have leaders.

Neither the Portfolio Committee nor the Provincial Legislature provided any form of interpretation. Instead, members of the public were asked to volunteer to translate. The quality and accuracy of the translation was dependent upon who was volunteering. It is unfair both to the volunteers and to those in attendance to expect people who are not trained in translation and who had never seen the 99-page bill to translate its complicated and often ambiguous content accurately.

Not only were there no formal translation services at the hearings, but no copies of the bill were provided. Nor was there a summary or any written information on the bill in any of the languages the communities use. Had there been adequate spoken translation perhaps the absence of documents would not have been so serious, but a combination of formal translation and any written information on the bill, or even copies of the bill, itself, put the community members at a considerable disadvantage.

Most participants were hearing about the bill for the first time. In order to gain any understanding of it, they had to rely on sometimes poorly translated, verbal inputs by officials. In the context of a richly instructive body of jurisprudence on public participation from the Constitutional Court, the process in the Northern Cape is disappointing.

Members of the various Khoi and San communities spoke with passion and frustration about how desperately they would like the government to preserve, recognise and protect their language and cultural practices. Yet nowhere was it made clear to these communities that the bill provides only recognition of leadership structures and communities, without any promise of cultural preservation or land rights. Nor does the Bill provide that Khoi-San communities will be supported in attempts to practise their way of life. This way of life, participants explained, is built around communing with nature and passing on traditions.

The Content Adviser to the Portfolio Committee explained in no uncertain terms that only clauses dealing directly with Khoi and San communities would be discussed, not those dealing with traditional leaders in former Bantustans, apparently because the hearings were being held in areas with a predominance of Khoi and San communities. But is this sufficient justification to warrant a selective explanation of this Bill? It means that from the start, the Khoi and San communities do not have a comprehensive understanding of the bill.

This disadvantage is brought sharply into focus in relation to land rights. In its present form, the bill gives traditional leaders in the former homelands jurisdiction over land, whereas Khoi-San leaders are given jurisdiction only over people, and not territory. It was not explained to participants that the bill differentiates between Khoi-San and other “traditional” groups in this way.

Inevitably, Khoi and San community members raised the issue of land, and whether the Bill returns land to the Khoi-San communities – because, they said, what is a leader without land? They did so with no knowledge that the Bill attempts to sidestep the Khoi-San land issue completely by treating Khoi-San leaders differently from other leaders.

The Portfolio Committee failed to make it to the hearing in Kimberley. The explanation for their absence was that there was a delay with their flight. The Kimberley hearing was the best attended of the four held in the Northern Cape, with the community hall packed and more than 300 people in attendance. But after community leaders and members voiced their frustration about the conditions of the hall in which the hearing was held, the hearing was closed.

Even without the benefits of translation or documentation, community members saw right through the promises of recognition. They repeatedly pointed out to the committee that the recognition of language and the return of land are the heart and soul of any form of recognition and must come first. There is therefore deep symbolism in the fact that translation was the weakest point at these hearings.

The public consultation process will continue over the next two weeks in the Western and Eastern Cape and will resume early next year in other provinces.

But it does not bode well that in a context where people are making it clear that recognising them means recognising their languages, the Portfolio Committee could overlook providing translation. We are still speaking past each other, it seems. DM

Photo: Hearings on the Traditional and Khoi San Leadership Bill got under way in the Northern Cape last month. Photo: Geoffrey York

Nolundi Luwaya is a researcher and Deputy Director of the Land and Accountability Research Centre in the Faculty of Law at the University of Cape Town.