Yasir Arman and Sudan’s forgotten civil war: ‘A guerrilla movement with a just cause can’t be defeated’ 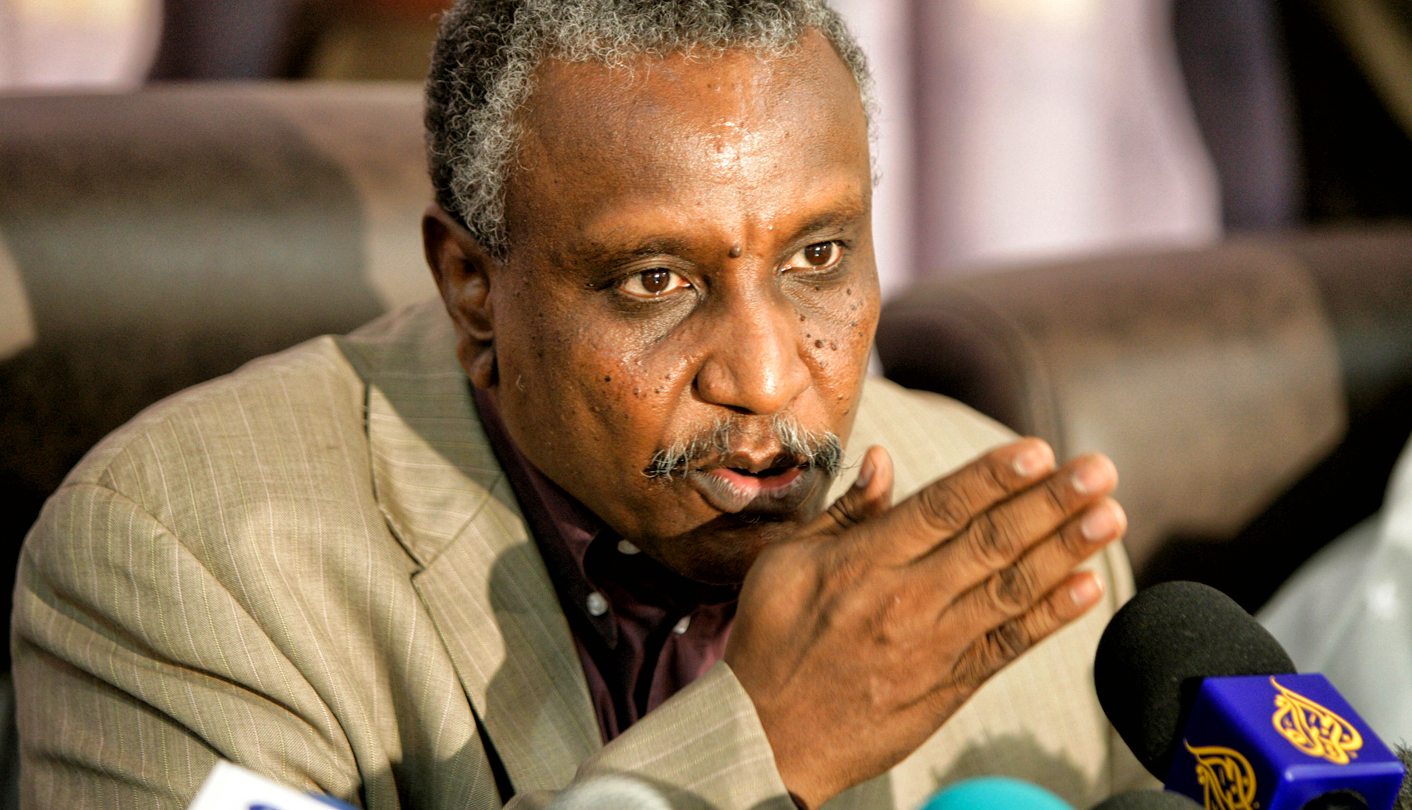 You know about the fighting in South Sudan. You’ve heard of Darfur. But what about Blue Nile, South Kordofan and the Nuba Mountains? Sudan’s other civil war – forgotten all too often by journalists and diplomats alike – is about to enter its sixth fighting season. SIMON ALLISON speaks to rebel leader Yasir Arman.

Four years ago, when I first met him, Yasir Arman was fighting a civil war. South Sudan had only just become independent, but Arman’s former comrades left him – and the areas of Blue Nile and South Kordofan – out of the deal. Arman was stuck in Sudan proper, facing the same old foe: General Omar al-Bashir’s regime in Khartoum. “We cannot sit idly to wait for Khartoum to kill us,” Arman observed then.

That was 2012. This is 2016 – a different time, a different world. South Sudan has imploded. There are new conflicts in Yemen, in Syria, in Ukraine. Brexit happened. Trump happened.

But when I meet him for the second time, at a hotel in Pretoria, Arman hasn’t changed. Even while the geopolitical tectonics shift beneath his feet, and the fundamentals of the international system appear to be coming apart at the seams, so Arman and his movement, the Sudan People’s Liberation Movement-North (SPLM-N), are still fighting the same old war.

It’s been a long, hard four years. The SPLM-N now control a territory the size of Belgium, with a population of around one million people. The conflict has ossified, become predictable in its patterns: in the wet season, lumbering government Antonovs drop cluster bombs on anything that moves down below; in the dry, Khartoum’s tanks press forward, making some ground before being outwitted by the rebels’ superior knowledge of the area.

It’s a stalemate, a fatal game of limbo in which thousands have already died, not to mention the hundreds of thousands who have fled and are trying to eke out an existence in inhospitable neighbouring countries. And the game really can go on forever. “As a guerrilla movement, with a just cause, we can’t be defeated,” said Arman.

He also knows they can’t win, not on their own, anyway. The SPLM-N has driven several attempts to unify Sudan’s opposition, including rebel groups, political parties, and civil society organisations, but with limited success. Even worse, global geopolitics has actually strengthened the government’s hand, with Khartoum being rewarded in cash and weapons for its participation in the Saudi-led bombardment of Yemen. “Bashir has the upper hand, but still we are resilient.”

Arman is an unusually reflective rebel leader – as rebel leaders go, at least. He’s a thinker, and he’s starting to question the old ways, the default methods employed by national liberation movements all over the continent. The mess in South Sudan – a mess presided over by the same men that Arman once fought in the trenches with – has triggered something of an existential crisis. South Sudan’s struggle succeeded, but look at the fruits of that success. It’s not a fate Arman wants for his own people.

“The armed struggle is no longer having the same strength, the same popularity as in the 1960s or 1970s, given the changing conditions of the world. There are new opportunities for changing a situation. So we need to look critically at our experience, especially what happened in South Sudan… and the failures of many national liberation movements. We need to bring a new discourse, a new narrative, into the political scene.”

“We should have a serious internal democracy within the rank and file of the national liberation movement. We should have also a peaceful exchange of leadership inside those organisations. Leaders should be elected with a time limit for whoever comes into the leadership,” says Arman, thinking, no doubt, of Bashir’s disastrous 27-year rule to the north, and the debilitating power games between President Salva Kiir and Riek Machar in the south.

This raises uncomfortable questions for Arman himself. He’s been in charge of the SPLM-N since its inception in 2011, and before that was a very senior figure in the movement which fought for the liberation of South Sudan (even chosen as their presidential candidate in Sudan’s 2010 vote, before the opposition chose to boycott the vote). Shouldn’t he be walking the changing leadership talk?

He laughs. “I’m ready yesterday to give up leadership. Not only me, but also the chairman, and the deputy chairman. We’ve played our role, and it’s part of our mission to bring new guys into our leadership. Keeping the leadership too long will bring stagnation, we need the new generation. Even ourselves [old leaders], we played the most effective role when we were younger, not now.” Fine words, but Arman won’t be drawn on a timetable – he says they’re still discussing within the movement how and when to manage a transition.

To be fair, he may have more pressing matters to attend to. “As I’m talking to you, Bashir is preparing for the sixth dry season offensive. He sent more than 8,600 troops to Blue Nile over the last week, as well as sending janjaweed [pro-government militias] from Darfur. The dry season will start very soon.”

Arman’s men are prepared. Last year, they captured 19 tanks from the Sudanese army. Eight of them are in usable condition. They also nabbed 400 trucks and 200 other vehicles. He won’t tell me where they get weapons from – “We are an old guerrilla movement, we have relations” – and says there’s enough funding to keep going.

“But whatever material support we get here or there, it will not lead us to sustain the war. If we sustain the war it is because the civilian population is with us. They have been fighting even with the sticks and stones.”

The conflict in Blue Nile and South Kordofan doesn’t get much attention. In the region, it is completely overshadowed by South Sudan’s civil war; even within Sudan, it sometimes plays second fiddle to fighting in Darfur (thanks in part to George Clooney’s star turn in bringing Darfur onto the international stage; the actor’s similar efforts in Sudan’s new south have not received the same attention).

This angers Arman. “There is aerial bombardment every day. The government refuses humanitarian access, which is a war crime under international humanitarian law. The situation in the Nuba Mountain [in South Kordofan] is as bad as Syria, Iraq, Libya and other places. But there is a complete silence there. Nobody is talking about us, our people are voiceless, that’s why I’m glad I’m talking to you now,” he says.

African countries are particularly complicit in ignoring the situation in Sudan, according to Arman. Earlier this year, Amnesty International released evidence that the Sudanese government had been using chemical weapons in Darfur. The SPLM-N claims that similar weapons have been used against them. “Some of our guys and civilians were vomiting and bleeding from their ears and nose. But not a single African country has asked for an investigation into the use of chemical weapons in Sudan.”

Arman is in Pretoria to try to drum up support from South African government officials, but it’s not going particularly well. The international relations department isn’t interested, while the ANC only agreed to a courtesy call with Baleka Mbete in honour of those old national liberation movement ties. The South African most involved in Sudan is Thabo Mbeki, who continues to lead mediation efforts between Sudanese opposition and the government, but he is not particularly popular with most opposition movements, who view him as too deferential to Khartoum.

South Africa’s inaction baffles Arman. He says that his people are subject to a double apartheid – on both racial and religious grounds – and that South Africans should really empathise better.

“South Africans know what it’s like to be a second-class citizen in your own country. The same thing is happening now to the people of Blue Nile, Nuba Mountain, Darfur.”

Arman says he hopes Bashir’s regime can be overthrown without international support, that surely Bashir can’t resist the growing weight of rebel movements, political parties and civil society organisations lined up against him. But he doesn’t sound too convinced. I can’t help but wonder if, in four years’ time, we’ll be having this conversation again. DM