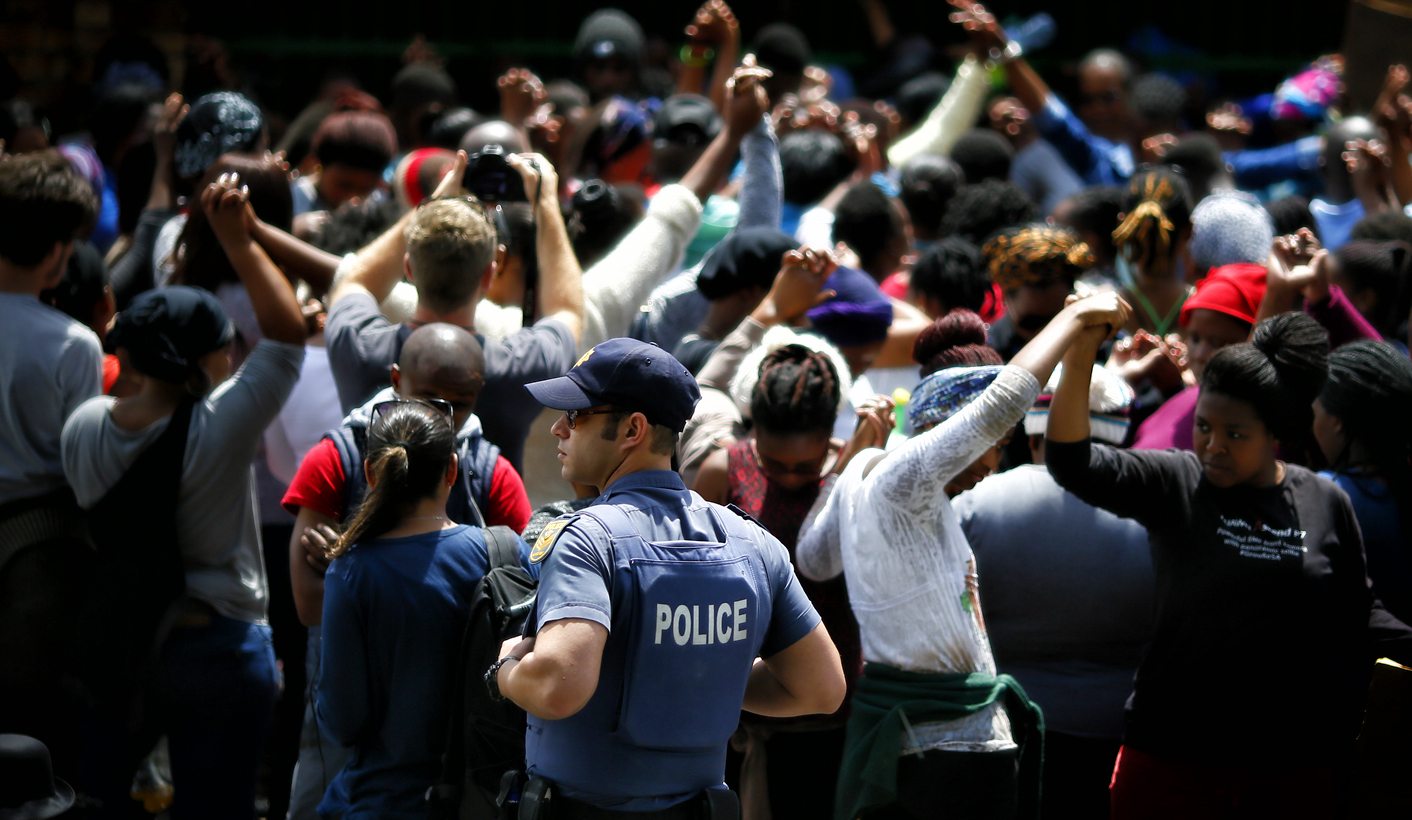 On Christmas Eve 20 years ago, an AWB bomb tore through a shopping centre in Worcester, killing four at the scene and injuring 67. That bombing was ultimately the springboard for the now-active Restitution Foundation, which – in partnership with the Human Sciences Research Council and the Castle of Good Hope – held some difficult conversations around fixing the unfixable in Cape Town this week. By MARELISE VAN DER MERWE.

Earlier this year, one of the perpetrators of the Worcester bombing, Stefaans Coetzee – now 38 – ran the Comrades Marathon partly as a public act of remorse. “[The race] was about honouring them,” he said of the victims at the time. “The pain was worth it because I cannot bring back the dead… the pain I felt cannot compare to the pain they experienced.” To motivate himself, Coetzee wrote the number 67 – to remind himself of the survivors – on his arms.

Coetzee was brought up by extreme white supremacist parents. At the time of the attack, he said, he was so filled with hatred that his only regret was that more people had not died.

Coetzee, like many repentant perpetrators, is a controversial figure, largely over the question of what can be done to atone for a crime so devastating. It’s not clear what makes some perpetrators change heart and others not.

“It can feel overwhelming,” explained Nicole Joshua from Common Change, speaking at the Restitution Conference at the Castle of Good Hope on Thursday.

Leading the discussion at the Practical Models for Restitution session, the Restitution Foundation’s Deon Snyman spoke of a shift in dialogue in recent years. “It’s encouraging to see an increasing number of white people joining the restitution discussion,” he said. “I have been humbled by that.”

Snyman is a religious leader. He is a minister in South Africa’s Uniting Reformed Church, as well as being chief operating officer of the Restitution Foundation in Cape Town. Snyman’s interest in restitution originated in a very different place to Coetzee’s. But they have one thing in common: it began through exposure. Coetzee, who had been brought up in a tight-knit conservative community, began to change his perspective while in prison. Snyman, in turn, says he increasingly understood the need for a practical model of restitution “sitting at the feet of my congregation”.

Many of the dominant political conversations in South Africa – from land restitution to education to gender-based violence or the ongoing battle for the recognition of the rights of the Khoe and San people – speak of an eroding democracy. Many of these topics, addressed at the conference, indicated a growing understanding of the ongoing impact of inequality and the urgent need to address it.

“Apartheid, as a systemised and institutionalised process of race-based discrimination, exploitation and oppression, left in its wake a deeply traumatised society. Many feel that this collective trauma has not been sufficiently addressed and that this has rendered the peace achieved after apartheid’s demise increasingly fragile,” argues the HSRC’s Dr Cyril Adonis, who also spoke at the conference. “It is widely accepted that apartheid’s racially inspired injustices profoundly traumatised all black South Africans.” According to Adonis, it’s essential to deal with the long-term consequences of all perpetrations of violence, including systemic violence; an argument echoed by UCT’s Sarah Crawford-Browne, who explored the effects of exposure to continuous traumatic stress, the reality of numerous South Africans still living in vulnerable neighbourhoods.

But what this “dealing with” entails remains the multibillion-rand question, and it seems even those most dedicated to finding the answer are some distance from unscrambling the egg. There’s the inability to settle on what the most just and appropriate form of restitution is, and there are the divergent needs of traumatised people. Apartheid may have been a mass trauma, but the victims are individuals.

The notion of “born frees” is also losing ground, where those born in post-apartheid South Africa are increasingly voicing their discontent with the stubborn legacy of the previous system and its effects on their own lives. In South Africa, studies of intergenerational trauma among victims of apartheid are sparse, says Adonis, but they are sorely needed. Apart from lingering inequalities, the effects of past traumas on families have been devastating.

Adonis recounts the story of Colin*, whose father disappeared during one of the States of Emergency in the 1980s when Colin was a young boy. When the circumstances of his death came to light, prominently, in post-apartheid South Africa, the child and his family were constantly reminded of the circumstances of his death through news reports, and Colin was frequently retraumatised, including during history class at school. Colin’s niece, speaking of the effect on her family of her grandfather’s death, told Adonis: “I was exposed to the sadness because we all stay together and we were close. I could not escape it. I was traumatised because they were traumatised.”

Another granddaughter described the effect of generations of trauma on her family: “It is difficult to put it into words. I feel sad. I feel nothing. I feel empty.”

In addition to the psychological impact, there are also socio-economic impacts and impacts on health; one young man told Adonis he suffered from depression and severe migraine headaches.

Over the past two decades, South Africans have asked ourselves over and over again – seemingly without success – how do we fix this? A major issue, argues UNISA’s Professor Nico Botha, is that “cheap” reconciliation often sacrifices justice, and that too often, notions of restitution have avoided rocking the boat at the expense of the victims. This is not just a political issue, he argues, but an economic one. “The poor of South Africa have been betrayed,” he says. “Neither the Peace Accord of the early 1990s, nor the negotiated political settlement or the Truth and Reconciliation Commission delivered to the poor of the country… the most serious deficit of all these processes [was] the sacrifice of justice on the altar of cheap reconciliation. Retrospectively we now know that the interests of neo-liberal capitalism in general and of the South African petit bourgeoisie, both black and white, in particular, were paramount.” Current models of restitution largely protect the interests of the wealthy, he believes; the restitution concept itself must be evaluated critically if systemic abuses are to be eradicated, as complex and difficult as that may be.

Snyman points out that practical models of restitution, in the initial years following apartheid, were frequently regarded as “a bridge too far” for advantaged communities who perceived reconciliation as going no further than simply building relationships, superficially, with people they did not know before. Actually giving back what was owned unjustly, or actively participating in confronting injustice or the perpetration of abuses, frequently did not occur.

“Restitution cannot be what whites think blacks need – it should be a case of people talking together about the best way forward,” he said.

But while this may appear obvious at first glance, dialogue, too, cannot be forced, as South Africans are beginning to realise; it is complex, complicated, and rests on the needs and capacity of victims. And there are differing opinions on how it can be conducted without compromising the dignity or sense of safety of those participating. Restitution, the foundation argues, is a “difficult, restless and provocative word”.

“It speaks about confronting injustice and actively deciding what needs to be done to address a past that continues to erode the present,” was the foundation’s rationale for the conference. “While it includes the problem of land and socio-economic redress, restitution ultimately aims at restoring dignity, a sense of belonging and all our humanity.”

This dignity, most importantly, cannot be sacrificed for cheap, Kodak-moment reconciliation.

The two sides of the coin no doubt go together: there cannot be dignity without adequate material redress, and material redress alone cannot heal wounds, restore dignity or necessarily compensate. So here we are: two decades in, having the tough talks, whether we know how to or not.

Because when generation after generation has both perpetrated and been perpetrated against, their children will have to play catch-up. An audience member’s poignant lament put that firmly into perspective. “The ones who have to be forgiven today – their children will still have the resources for many years,” he said. This – for the Restitution Conference and others like it – is bound to be the most difficult conversation of all. DM

Photo: A South African policeman watches residents of Masiphumelele and some members of the greater south peninsula community as they pray during a protest for the release on bail of community leader Lubabalo Vellem outside the Simonstown Magistrates court, Cape Town, South Africa 30 October 2015. EPA/NIC BOTHMA