ISS Today: Is South Africa part of the youth revolution? 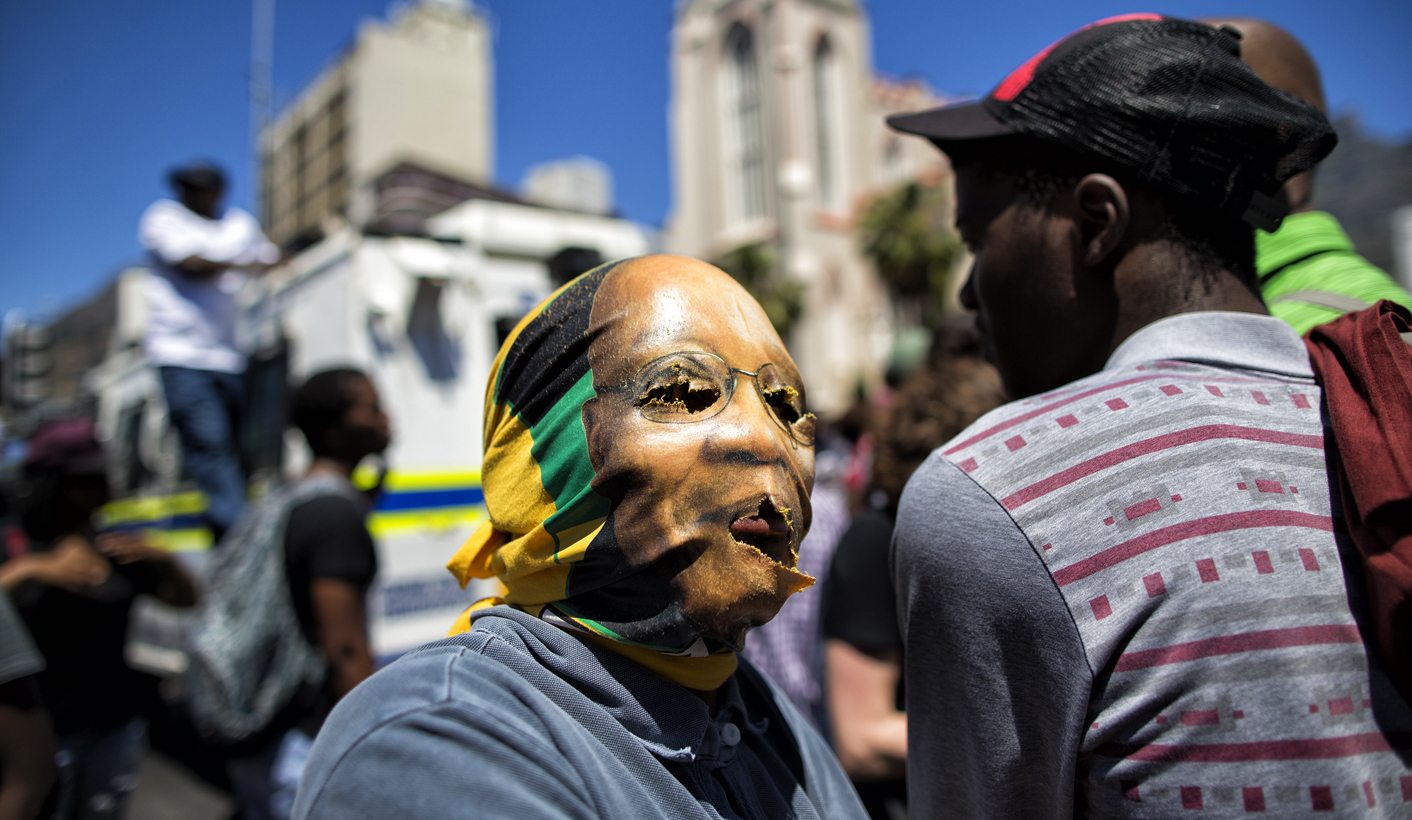 South Africa’s robust electoral system and independent institutions have been keeping the elite in check – not popular protest. By Liesl Louw-Vaudran for ISS TODAY.

The last few weeks have been momentous for South Africa. President Jacob Zuma and the ruling African National Congress have suffered successive blows to their integrity and efforts to subvert the rule of law.

The withdrawal of fraud charges against the popular Minister of Finance, Pravin Gordhan, on Monday October 31 was a victory for Gordhan’s supporters. They believe the minister’s clean-hands policy and commitment to rooting out corruption had given rise to the accusations that have been hanging over his head.

Two days later, the Gauteng High Court ordered the publication of a report by former public protector, Thuli Madonsela, on links between the wealthy Gupta family and Zuma, several ministers and heads of parastatals. Civil society activists, business leaders and veterans of the ANC’s liberation struggle welcomed the report, which was widely seen as proof of the continued ability of South Africa’s justice system to defend democracy and constrain corruption.

In the wake of these events and the weakening of the all-powerful ANC, some have drawn comparisons between South Africa and the situation elsewhere on the continent. The argument is being made that the popular disaffection with the ANC is linked to a larger sentiment across Africa by significant sections of people who are fed up with corrupt regimes.

At a meeting held in Arusha in Tanzania recently, attended by civil society groups, faith-based organisations and others, plans were announced for a manifesto of a pan-African citizens’ movement to be launched next year. The aim is to foster “Africa-wide solidarity and unity of purpose of the peoples of Africa” in order to fight for “the right to peace, social inclusion and shared prosperity”.

Clearly, a growing section of the population on the continent – the youth – is blaming those who have been in power since independence for amassing wealth through corruption and not doing anything about alleviating poverty.

This is the case in many places across sub-Saharan Africa: from Burkina Faso to the Democratic Republic of Congo, Angola and Zimbabwe, where successive waves of civil unrest reflect growing opposition to authoritarian leaders. This came in the aftermath of the Arab Spring, which saw the overthrow of regimes in Egypt, Libya and Tunisia, with decidedly mixed results in terms of stability and democratisation.

The biggest achievement of this citizens’ movement to date has been the overthrow of former president Blaise Compaoré of Burkina Faso in 2014.

In South Africa, the popularity of the Economic Freedom Fighters on a pro-poor ticket could, for example, be seen in line with this movement. The sentiment that corrupt leaders are responsible for inequality and poverty in South Africa runs deep in the party. The student protests over university fees that spread like wildfire across the country this year could be a trigger for similar developments in South Africa. Social media, of course, instantly links their voices to those of other, similar-minded young people in Africa and across the globe.

However, let’s not jump the gun. Research shows that despite strong parallels in the way political change is being affected across the continent, there are major differences between countries and regions. History, the level of economic development and the attitude of elites play a major role.

Speaking at a seminar at the Institute for Security Studies (ISS) in Pretoria last week, southern Africa scholar Alex Vines, head of the Chatham House Africa Programme, pointed out that former liberation movements in power in southern Africa are currently under huge pressure, but that there are important nuances between them.

In Angola, the ruling Popular Movement for the Liberation of Angola and President Eduardo dos Santos are confronted with popular dissent that has hitherto been severely repressed. Meanwhile, in Mozambique the threat to the ruling Mozambique Liberation Front is mostly coming from an unfinished peace agreement that left the Mozambican National Resistance – the former rebels – with a residual military capacity in the north and centre of the country.

In Zimbabwe, anti-government movements have been more successful than in the past due to the inability of the security forces to infiltrate their organisations, as had happened previously. Traditional opposition parties have been replaced with unstructured protest movements that rely on social media networks to stay in contact and co-ordinate.

“How do you catch these guys unless you’re on the same Whatsapp group?” asked Vines. The Achilles’ heel of the ageing liberation movements in southern Africa is the youth, he says. In both Angola and Zimbabwe, there is huge uncertainty surrounding succession politics within the ruling party.

In southern Africa, the determining factor for whether the political confrontation will lead to large-scale violent conflict is linked to underlying economic crises. Here again there are important differences. Economic decline has been caused by low commodity prices, drought, mismanagement of the economy – or, in some cases, all three of these. Vines predicts that Mozambique, with its massive government debt and a weak leadership, is in grave danger – even more so than Zimbabwe.

Where does South Africa fit in? Is the Save South Africa movement – made up of leaders of civil society, liberation stalwarts and big business – the determining factor in politics in the country? And can it be linked to a wider citizen’s movement in Africa that sees no other way out than taking to the streets?

In a new paper on the future of democracy in Africa, Jakkie Cilliers, Head of the ISS’ African Futures and Innovation section, argues that the lack of a robust electoral practice and neopatrimonialism are the key factors that hold Africa back from benefiting from democracy. The quality of a country’s electoral democracy determines whether democracy contributes to economic growth and development, he argues.

Clearly, in South Africa, it has so far been the strength of its institutions and electoral system and not the popular protests – of which there have been many – that keep the ruling elite from further misrule.

The ANC’s loss of the control of the country’s big metros like Johannesburg, Tshwane and Nelson Mandela Bay in the local elections of August 3, 2016 has had a huge impact on its ability to brush off criticism. Recently a large group of party stalwarts demanded a rethink of ethics and leadership within the ANC.

Second, the public protector’s investigation into the multimillion dollar contracts obtained by the Gupta family thanks to their links with the governing elite is a huge blow to the nepotism and patronage that has become a hallmark of the ANC.

The lack of regular free, fair and competitive elections is what is most frustrating to people in places like Zimbabwe, Uganda, Gabon, Cameroon, Burundi, the Republic of Congo and Ethiopia. To get rid of authoritarian leadership, citizens have to take to the streets since the path to electoral change is generally frustrated by ruling parties.

And even here, there are major differences in the way these conflicts play out. In Gabon, for example, the opposition parties stood together in the last election in September 2016, while ethnic divisions and a history of repression are largely seen as the driving force between anti-government protests in Ethiopia.

The delay or absence of polls for long periods of time is also what makes people take to the streets in the DRC and Angola.

South Africa is not in any way exempt from the threat of weakened institutions and the “capture” of state institutions. That has been made clear over the past few weeks. Yet these are the institutions that are weighing in on the political situation; and not a popular uprising akin to those of frustrated youth across Africa. But if systems were weakened, this could change very quickly. DM

Photo: A student wears a T-Shirt with the defaced image of president Jacob Zuma over his head during a student protest over fees to Parliament on the occasion of South African Finance Minister Pravin Gordhan presenting his Medium Term Budget Policy speech to Parliament in Cape Town, South Africa, 26 October 2016. PA/NIC BOTHMA