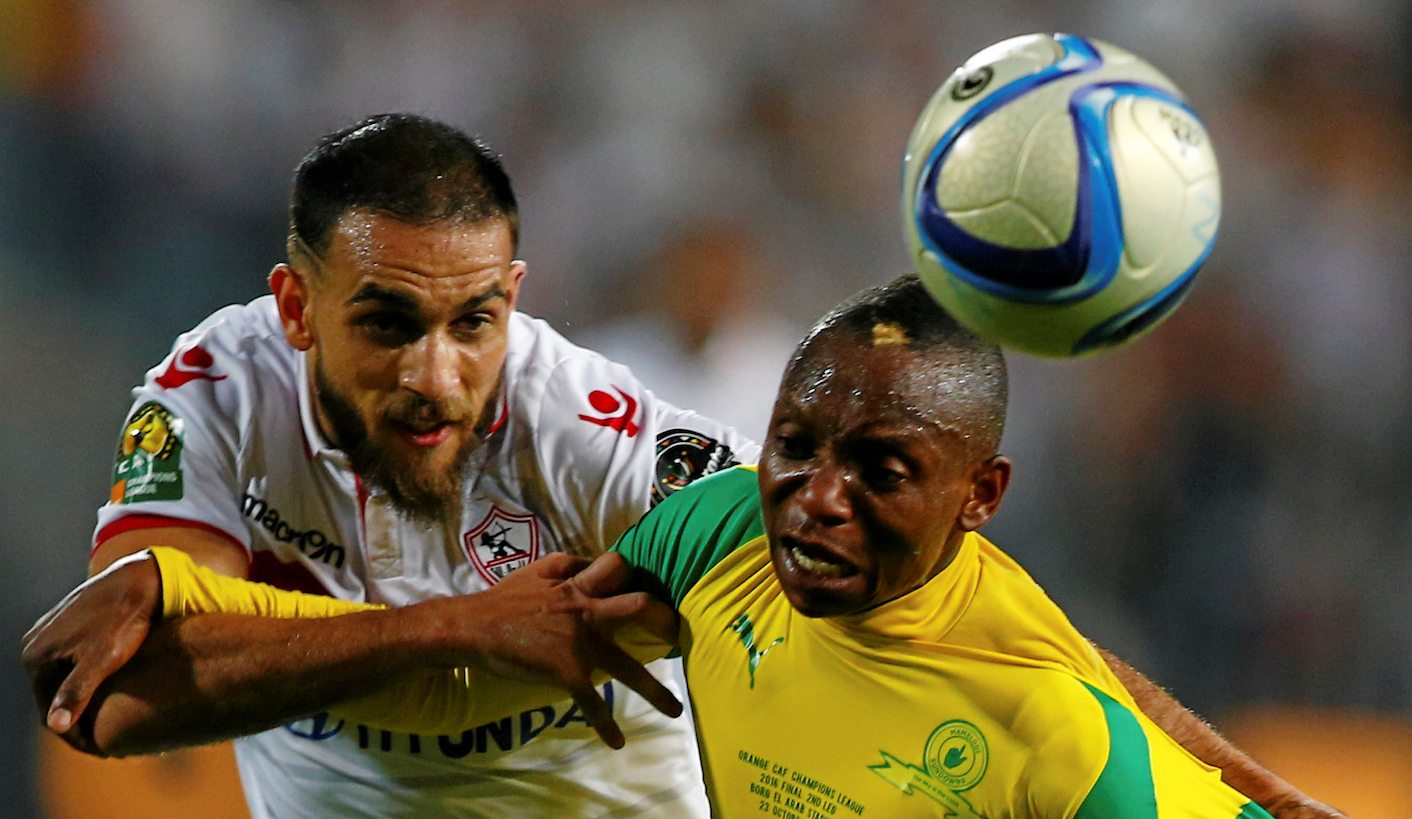 Sport is by no means a cure-all for everyday woes, but every so often it offers an antidote to the whirlwind reality of a crazy country. On Sunday night, as Mamelodi Sundowns became only the second South African team to win the African Champions League, we got a much-needed injection of that antidote. Thank you Masandawana, let the music play on, and keep shining those shoes. BY ANTOINETTE MULLER.

It doesn’t matter if, for example, the individual wasn’t born in the country (see: Chris Froome) or even if the team that achieved such success is not one you’d usually support – as is the case with African Champions League winners Mamelodi Sundowns. All that matters is that South Africans have something to cheer about, and boy, can they cheer for Masandawana.

On Sunday night, Mamelodi Sundowns became just the second ever South African team to win the African Champions League, beating Zamalek 3-1 on aggregate, after a 3-0 victory at home and a 0-1 loss in Egypt.

The second leg in Alexandria wasn’t exactly flash football, but that didn’t matter. What mattered far more was the resolve the Brazilians showed on the night. Despite heading into the Champions League final with a 3-0 lead, Sundowns never once looked like they had that advantage on Sunday night. Sundowns struggled for possession the first half, but that didn’t stop them from pressing and probing, in an encounter that was feisty right from the start.

Zamalek were intent on outmuscling the opposition and the fans, intent on unsettling them. It took deep into the second half for it to have an effect and before Sundowns conceded. Rattled, but never unsettled, Sundowns held on, taking the sting out of it and somehow, not letting another goal in.

And so, in front of tens of thousands of miserable Zamalek fans, the hundred-plus Sundowns fans who made the journey – paid for by Patrice Motsepe – got to watch their team lift the trophy. They very nearly didn’t get to see it all, though. Downs had given Zamalek 400 complimentary tickets to the South African leg of the clash‚ 40 of those for the presidential suite and 20 VIPs, but the Egyptian side nearly did not reciprocate. By Saturday, fans still weren’t sure that they would be allowed to enter with Sundowns’ commercial manager Yugesh Singh telling TimesLive he had not been able to secure tickets. By the time kick-off came around, though, the unmistakable yellow stood out brightly and defiantly in the crowd of white shirts.

As the final whistle blew, all of South Africa was Brazilian. You can say glory hunters if you wish, but the lapping up of glory and success came as the perfect antidote for South Africa’s current sporting woes. The Boks are miserable and Bafana Bafana didn’t qualify for the 2017 Africa Cup of Nations, but at least Pitso Mosimane’s men managed to conquer Africa.

Sundowns’ success embodies characteristics beyond sport. It’s been a journey taken on a road with a little bit of luck, defined by character and underscored by redemption. For Mosimane, it’s a sigh of relief – finally managing to lift a trophy that he has been obsessed with for so long.

But, perhaps most striking of the campaign is the nerves of steel from the players and their ability to completely brush off all adversity. Their trip to Egypt was marred by a number of obstacles. KickOff reported earlier in the week that the training venue the Premier League champions expected to have handy as not made available to them. And, throughout the fixture in Alexandria, Zamalek’s fans tried their best to distract the players with flashing green lasers. Then, just for good measure, Downs had to sub off keeper, Denis Onyango, late in the first half after he was karate kicked earlier.

But Masandawana is from Mzansi and they make us tough here. And that start that will now live on the yellow jerseys will remind the team – and us – that the sky is the limit.

And so, as the country enters yet another uncertain week, politically and economically, and while who knows what awaits the Boks when they begin their end of year tour campaign in two weeks, South African sports fans can take Monday to bask in Sundowns’ glory.

Thank you, Mosimane and co, for a timely distraction from all the woes. Sporting success is by no means a magic pill that will solve all that’s wrong in the world, but when the journey to it is intersected with the one we’re currently taking in reality, it offers hope and an escape, even if it is for just a little while.

So, thank you Sundowns, let the piano play on and keep shining those shoes. DM