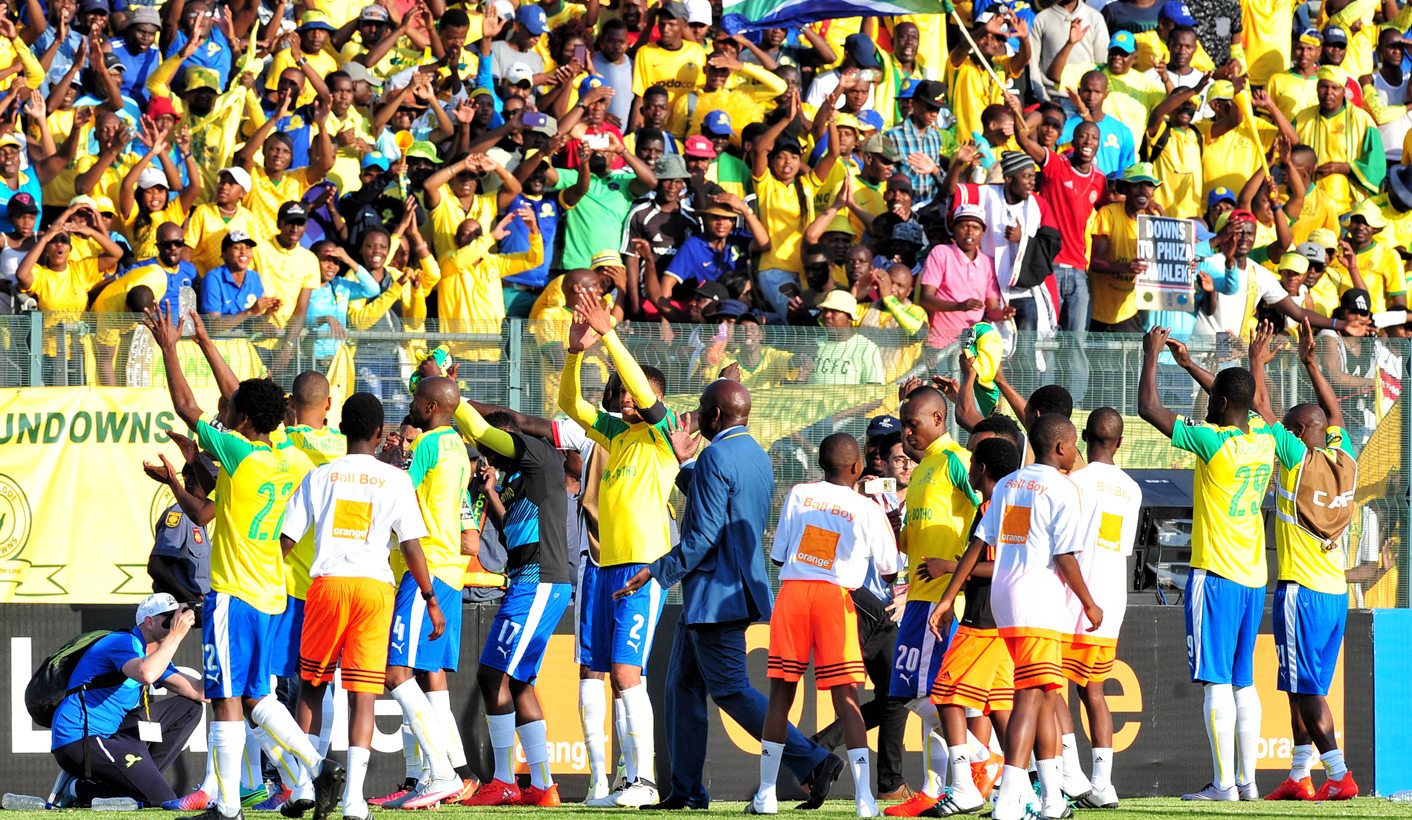 Mamelodi Sundowns have one hand of the African Champions League following a 3-0 victory over Zamalek in the first of a two-leg final. For Pitso Mosimane, the guy most passive soccer fans will know as the man whose Bafana Bafana side celebrated an African Cup of qualification that never was, adding this trophy to his ever expanding cabinet, this will serve as further redemption. But it should also force introspection into the poisoned chalice that is the national coaching job. By ANTOINETTE MULLER.

If you are not suffering a serious case of fomo (as the kids would call it) for not being at the Lucas Moripe Stadium over the weekend to see Mamelodi Sundowns trash Zamalek 3-0, you need urgent medical intervention because you might very well lack balls.  If you have no idea what the going on is about, you might need your ID book revoked. Because even the most passive sports fan or soccer ignorant among us could not have ignored the pictures of the sea of yellow that engulfed the stadium over the weekend.

And even if Anthony Laffor’s near lap of the athletics track at the stadium following his opening goal was a bit of an exaggeration, Sundows can run all the victory laps they want with one hand now firmly on the African Champions League trophy.

Their coach, Pitso Mosimane, however, warned against getting too excited.

“We need to keep feet on the ground … Zamalek scored four against Wydad in Alexandria [in the semi-final]. If we don’t think they can score four against us then we’ll be fooling ourselves,” he told SuperSport after the match.

“We have an advantage, we scored the goals, but it’s not over. I see everybody is happy, I see the boys going around the stadium [to celebrate] – beautiful, you know why? Because they haven’t seen this, it’s unbelievable, they haven’t seen yellow like this [a full stadium], you know what I’m trying to say?

“But I would not like it [to celebrate now] because we haven’t been there [to Egypt yet], but I will say it’s a once-off, we’ve never had it and somewhere, somehow we must enjoy it once we’re there, you know what I’m trying to say?

“So I’ll try to manage it but it’s okay for them to enjoy it, they deserve it.”

Mosimane, of course, is no stranger to premature celebrations. Soccer fans who only watch the national team will know him as the man who watched Bafana Bafana celebrate qualification for the 2012 Africa Cup of Nations before not actually qualifying. The team had misread the rules, and Mosimane, like so many other national team coaches, became the butt of many jokes.

That mishap would become the nadir for Mosimane’s two-year tenure with Bafana Bafana and, for too many people, it also became the thing that defined him. But that confusion belied his credentials as a coach.

He’d spent six years with SuperSport United prior to his time with Bafana Bafana and much of that time was spent doing a patch-up job. The team was second from bottom when he took the reins. They spent the following four seasons floating between second and fourth place before slipping below the top five and Mosimane parting ways with the club. SuperSport would then win a hat-trick of titles and while the coaches who took over from him undoubtedly deserve due credit for that feat, the foundation he laid cannot be ignored.

It’s not too dissimilar to his current tenure at Sundowns. When he took over the role in 2012, Sundowns were bottom of the log. They’ve since won the league twice and finished second another, but the Champions League title is the one trophy that has eluded Mosimane and one he has wanted to get his hands on for a long time.

It will go some way in easing the disappointment of the MTN8, which saw Downs lose the final 3-0 to Wits – a result which, if you were to appropriate blame, the Champions League schedule might have a thing or two to answer for. But if they do win the coveted Champions League trophy, becoming only the second South African team to do so, that result might not even matter and Mosimane would have fixed yet another thing, something which he has earned something of a reputation for.

In an interview with IOL, Mosimane, the coach bemoaned this reputation of coach that fixes things.

“It’s my life. I get the thrill of it because, how low can you go? The only way you can go is up, especially since these aren’t bad teams… I used to look at the trophy cabinet here and see that the last trophy was won in 2008. I passed that cabinet every day. One coach asked me, ‘Can we have new cups there?’ Now when I pass I am happy. I see new trophies. I realise that they are putting them in front. I am happy.

“You must leave a legacy.”

For too many, that legacy was one of the guy who couldn’t read the rules. His time with Downs has surely turned that around, but it also holds important insights into the woes of the national team.

As Shakes Mashaba continues his embattled tenure, and Mosimane sets out to make history, perhaps it is time for some introspection into what exactly the national team seems to do to coaches who are clearly far better than a floundering Bafana Bafana makes them out to be.

Yes, coaching at national level is a different kettle of fish to club football, but it’s becoming increasingly clear that the national coaching job, as with so many other sporting codes in this country, is a poisoned chalice. We need some introspection as to why – or face a sick cycle of men being chewed up and spat out by a system that is clearly kinked somewhere down the line. DM