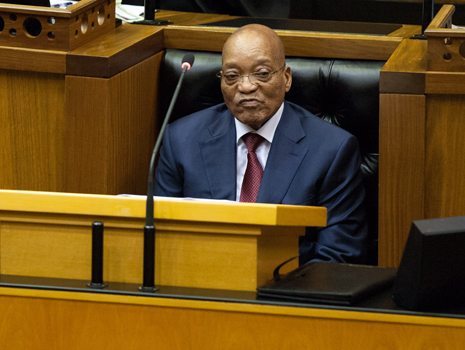 It has finally happened. ANC Chief Whip Jackson Mthembu has started the pushback within the ANC that has been missing while the uproar in society grows about President Jacob Zuma’s leadership and the onslaught against Finance Minister Pravin Gordhan. Mthembu’s outspoken comments this weekend marked the end of the ANC’s attempts to keep a lid on the turmoil in the organisation. While the ANC deals with this fallout, it also has questions to answer about a meeting at its headquarters that included the president and the head of the National Prosecuting Authority (NPA). All this while the state capture issue has exploded, spraying nuclear waste on Zuma. By RANJENI MUNUSAMY.

In the a veritable smorgasbord of startling reports in the Sunday Times this week was the revelation – uncontested – that the National Director of Public Prosecutions (NDPP) Shaun Abrahams attended a meeting at the ANC’s headquarters, Albert Luthuli House, in which President Jacob Zuma was present. The meeting, which the presidency spokesman and Abrahams claim was about the security situation on university campuses as a result of the fees protests, took place a day before the NPA head announced that Finance Minister Pravin Gordhan and former revenue service officials Oupa Magashula and Ivan Pillay would be charged.

According to the Sunday Times, Abrahams said he was at Luthuli House at the invitation of Justice Minister Michael Masutha for a meeting “relating to the state of anarchy as a direct result of the violent student unrest”. Also in attendance, along with Masutha and Zuma, were the Minister of State Security David Mahlobo and the Minister of Social Development Bathabile Dlamini.

Was that a government meeting or an ANC meeting? Mondays are set aside for the ANC top six officials and national working committee meetings, which would explain why Zuma was at Luthuli House. If this was a government meeting, with the ANC simply providing the venue because the president was already there, why was it confined to that collection of ministers? If the meeting was about the violence on campuses, why were Higher Education Minister Blade Nzimande and Police Minister Nkosinathi Nhleko, whose departments are directly affected by the fees crisis, not in attendance?

And of all the state officials that could have been summoned, why was Shaun Abrahams there? Why would the NDPP be meeting with the president about student violence ahead of arrests being made? Does this not compromise his independence? Was the prosecution of student leaders – presumably that would be the only role an NDPP would have in the discussion – the best way to resolve the higher education crisis?

How would that discussion on the prosecution of students have gone anyway? “Go hard on them?” “Go easy on them?” Surely prosecutions are decided based on evidence and the nature of the crimes committed. Why would the president have to be involved in such a discussion – and with the Minister of State Security present?

If the violence on campuses was used as a pretext for the meeting, it is a terrible one – in many ways worse than what the discussion was more likely to have been about. If both Abrahams and the presidency said that the NDPP had come to inform Zuma that he would be announcing the next day that a summons was served on Gordhan, it would not only be believable, it would be justifiable.

Gordhan is a member of Zuma’s Cabinet and in the most watched portfolio since Nhlanhla Nene’s firing in December. To serve summons Gordhan just ahead of the Medium Term Budget Policy Statement has huge implications for the state and the economy. If Zuma had not been made aware that the NPA intended to charge Gordhan, it would have been rather strange.

But the fact that another story had to be stitched together to explain Abrahams’ presence at the Luthuli House meeting shows an attempt to conceal that the Gordhan matter was discussed.

Why? To disavow that there is a political conspiracy behind Gordhan’s prosecution.

One person who certainly does not believe that the prosecution of Gordhan is legitimate is a regular at Luthuli House, ANC national executive committee (NEC) member and the party’s Chief Whip in Parliament Jackson Mthembu. On the same day Abrahams announced that Gordhan, Pillay and Magashula would be charged, Mthembu gave his firm backing to the finance minister saying he was “an honest man”.

This weekend Mthembu came out with guns blazing in various media interviews, saying the entire ANC NEC should step down. “Why should we not step down, given that we have messed up? All these things happened under our watch. The ANC is losing support at 54%. Unless the party starts doing things differently, we will not be in power in 2019,” Mthembu told City Press.

“Speaking out against what is wrong is the only way to save the ANC, or we will continue to guillotine one another.” Mthembu said the use of state organs to settle political scores made the ANC leadership worse than the Apartheid rulers.

“When you see these things being done by a democratic state, your heart jumps. We are not only equal to the Apartheid state, we are worse – because they never treated their ministers like this.”

Mthembu did not directly attack Zuma, but he has blasted the ANC’s leadership failures and scandals, including the handling of the Nkandla matter. He is also the first person in the current ANC leadership to announce that he would not be available to be elected in any position in the party at the ANC’s national elective conference in December next year.

While several other ANC leaders, including Deputy President Cyril Ramaphosa, have spoken out in support of Gordhan, Mthembu is the first one to turn the guns on the ANC. Instead of keeping to the practice of closing ranks and protecting the ANC, Mthembu has broken the conspiracy of silence. This is bound to catch fire and prompt discussion in ANC structures. Mthembu might pay the price for discussing the matter openly, with the ANC Youth League and ANC Military Veterans Association already calling for him to be disciplined and to step down from his post in Parliament.

But the horse has now bolted, and Gordhan’s appearance in court on 2 November is likely to draw more support from ANC members emboldened by Mthembu’s stance. The support campaign for Gordhan is gaining momentum with business leaders and civil society groups rallying behind him. On Sunday, Save South Africa, the new initiative launched by Sipho Pityana, the chairman of the Council for the Advancement of the South African Constitution, called for a “People’s Assembly Against State Capture” on 2 November. This would include a protest march to the Pretoria Magistrate’s Court where Gordhan, Magashula and Pillay will be appearing.

The days of the ANC taking cover and trying to maintain a safe distance from the chaos in government is over. Revelations in the Sunday Times about how the Guptas operated and tried to use privileged information for the benefit of their businesses are too damning to ignore. If the ANC needed further evidence of state capture, they certainly have an avalanche now. All of the allegations against the Guptas raise questions about Zuma’s knowledge, consent and involvement.

Gordhan’s prosecution has ignited an inferno in society and has finally penetrated the inner sanctum of the ANC. The pressure is not on Gordhan but the people who must make the case against him stand up in court.

Whatever happens in the case has major repercussions for the country but also for the group of people who met at Luthuli House on 10 October. If they did not know it then, Zuma and Abrahams would certainly know by now how much is riding on the case and what is heading their way. DM.