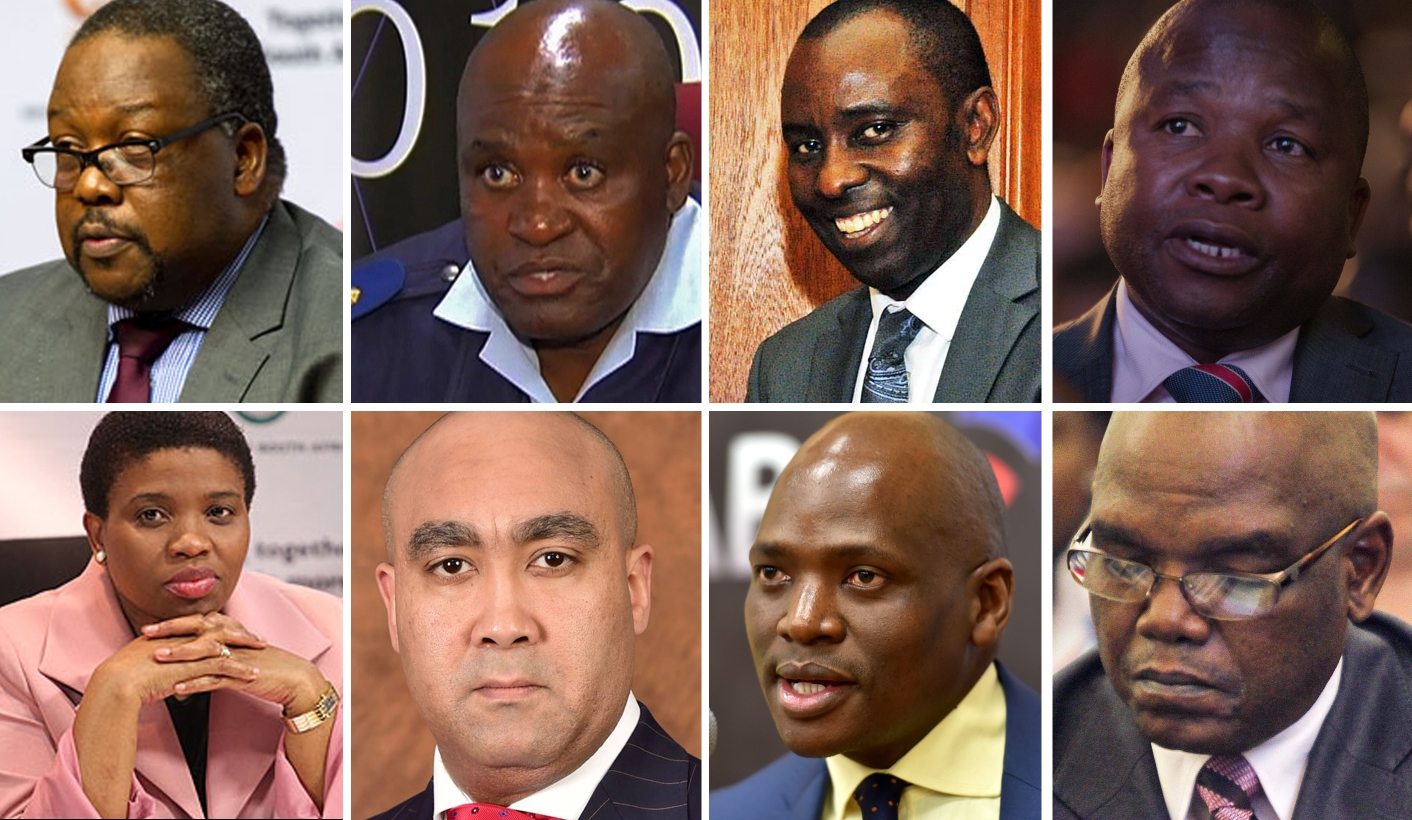 In politics, the only people who don't look to the future are those right at the top of the greasy pole. Everyone else is vying for position, thinking about how to get themselves there. Along the way, they make alliances, and hitch themselves to the wagons of those they think will move them up in the world. When wagons aren't available, they use tsunamis. The particular tsunami we are living through has picked up some interesting characters. People who have helped President Jacob Zuma, done his bidding, aided and abetted him in what is effectively dismantling of Mandela's ANC and South Africa. But what is going to happen to them when the tsunami eventually recedes? By STEPHEN GROOTES.

(Note: The people listed in this story are but a tip of a massive iceberg. It would have been impossible to fit them all meaningfully in a daily newspaper article.)

On Monday, Justice and Correctional Services Minister Michael Masutha had a spectacularly ill-timed press conference to discuss the proposed Hate Speech Bill. The day before had seen revelations that he had attended a meeting with the head of the National Prosecuting Authority, and the current leader of the Pravin Gordhan Fan Club, Advocate Shaun Abrahams. The location of this meeting: ANC’s headquarters, Luthuli House. The date was only one day before Abrahams had his press conference to announce a spectacularly ill-informed decision to charge Gordhan with fraud.

When Masutha was asked about the meeting, his response included the fact that the “last thing on my mind” was that the venue of the meeting was a problem, before he said that the decision to charge Gordhan was not discussed, as he already knew about it.

Now everyone, altogether please, hold hands if you like, as we chant, “WE DON’T BELIEVE YOU”.

Of course it simply cannot be true. And if it is, well, then it is time to take leave of this particular quantum reality. But it is a great example of another pair of consiglieres throwing themselves under the bus for The Godfather, the man better known in South Africa as Number One.

The list of Zuma’s consiglieres is long, and relatively undistinguished. No one will forget Police Minister Nkosinathi Nhleko, and his operatic defense of the spending for Nkandla. And his nonsensical announcement that he “sticks by” his report, even after Zuma himself had admitted he had to pay back some of the money. And how about Shaun Abrahams? A man with a promising career as a prosecutor, who had scored major convictions. Someone who had been mentored by no less interesting a person than Advocate Mokotedi Mpshe, the person who first “dropped” the corruption charges against Zuma.

There are plenty of others of course. Nhathi Mthethwa oversaw some of the Nkandla construction when he was at the Police Ministry, David Mahlobo does nothing but spend his time allowing the State Security Ministry to be abused for public ends through jamming cell phone signals at Parliament, or, strangely, joining Inter-Ministerial task teams on Higher Education. Or how about so many members of the ANC’s National Executive Committee, who are standing by and watching the country’s most glorious liberation movement literally burn to the ground in front of voters. People like Jeff Radebe who defends Zuma at every press conference, or Nomvula Mokonyane, who said ANC members should defend Zuma with their buttocks.

Then there are the active supporters, the people whose job it is to attack those who criticise Zuma. Step forward the ANC Youth League and its leader Collen “Oros” Maine, or the ANC Womens League and Bathabile Dlamini, who appeared more agitated over the fact the “Khwezi Protestors” had managed to embarrass Zuma on the night of the election results than she ever has been over women’s rights.

How about Faith Muthambi and her add-on, Hlaudi Motsoeneng? Nomgcobo Jiba, Berning Ntlemeza? His guardian angel, Richard Mdluli? Or the henchmen like Mosebenzi Zwane and Des van Rooyen?

Some of them may be thinking that they will actually have prospects when Zuma goes. After all, it is true that some members of Thabo Mbeki’s cabinet found their way into Zuma’s first cabinet. People like Nosiviwe Mapisa-Nqakula (who has since smuggled a young woman into the country and refused to take the consequences for it) did manage to survive the transition. But the ANC then was a different place. And so was the country. Back then, the ANC still had a lock on electoral power. It does not have that any longer. It seems rational to suggest that for the party to have a fighting chance in the 2019 elections, it needs to portray itself as differently as possible from the way it is portrayed now. It has to get rid of Zuma, and all the baggage that he has with him. This means that anyone who is associated with him now is unlikely to have a long-term future in politics.

For some people, this may not matter too much. If you have been closely associated with the Guptas, or grown rich on contracts from State-Owned Enterprises, then the loss of a future in politics may be something that you can live with. Some of the people who currently spend their lives on Twitter defending Zuma and the Guptas may be fine with whoever the new masters will be. But the people who will really lose out are actually those on the line for Zuma.

Consider Nhleko. What possible remaining shred of credibility could he have? Future for him is if the Premier League, or the “tenderpreneur faction” or someone similar, win comprehensively. But that will surely run the risk that the ANC will be out of power in 2019. Who would employ him, who would take him seriously, or anyone from this massively long list, in any possible position in public life? Zuma does not have a track-record of staying loyal to people when he comes under pressure. And he would not be in a position to help anyone anyway.

Abrahams is probably in no better position. Already former ANC Treasurer Mathews Phosa has asked the General Council of the Bar to consider whether he is “fit and proper” to hold his position. And that was before the revelation that he was at the headquarters of the ruling party on the day before he announced a decision in what is surely a highly political prosecution. To read through the legal papers lodged on Monday by Freedom Under Law and the Helen Suzman Foundation challenging his decision is to realise just how difficult Abrahams’ position is. Just the fact that he had a press conference to make this announcement is considered improper. If Zuma goes, and he is suspended or removed or just leaves the NPA, what will happen then? For any law firm to hire him would be to signal to the world that they are happy to hire someone who has not lived up to an oath.

Or at least they used to.

It is difficult to understand why some people around Zuma do what they do. Perhaps they feel that there is no other option, that they have got caught up in some sort of situation from which they feel powerless to escape. But surely someone like Nhleko or Mahlobo or even Abrahams could always just resign, take whatever dignity they have left, and leave the stage. Unless there is some kind of hold over them that we are not aware of.

The most likely explanation is that some people believe that the rule of the ANC will be infinite. And that by “ANC” they believe that Zuma’s rule will be infinite too. Clearly they think that the situation we are in now will continue forever. It will not. This is not Zimbabwe, our elections are actually elections.

At some point reality is going to set in. And they will leave the stage. With what they deserve. Nothing. DM