#FeesMustFall: Another day of violence as the state kicks issues forward 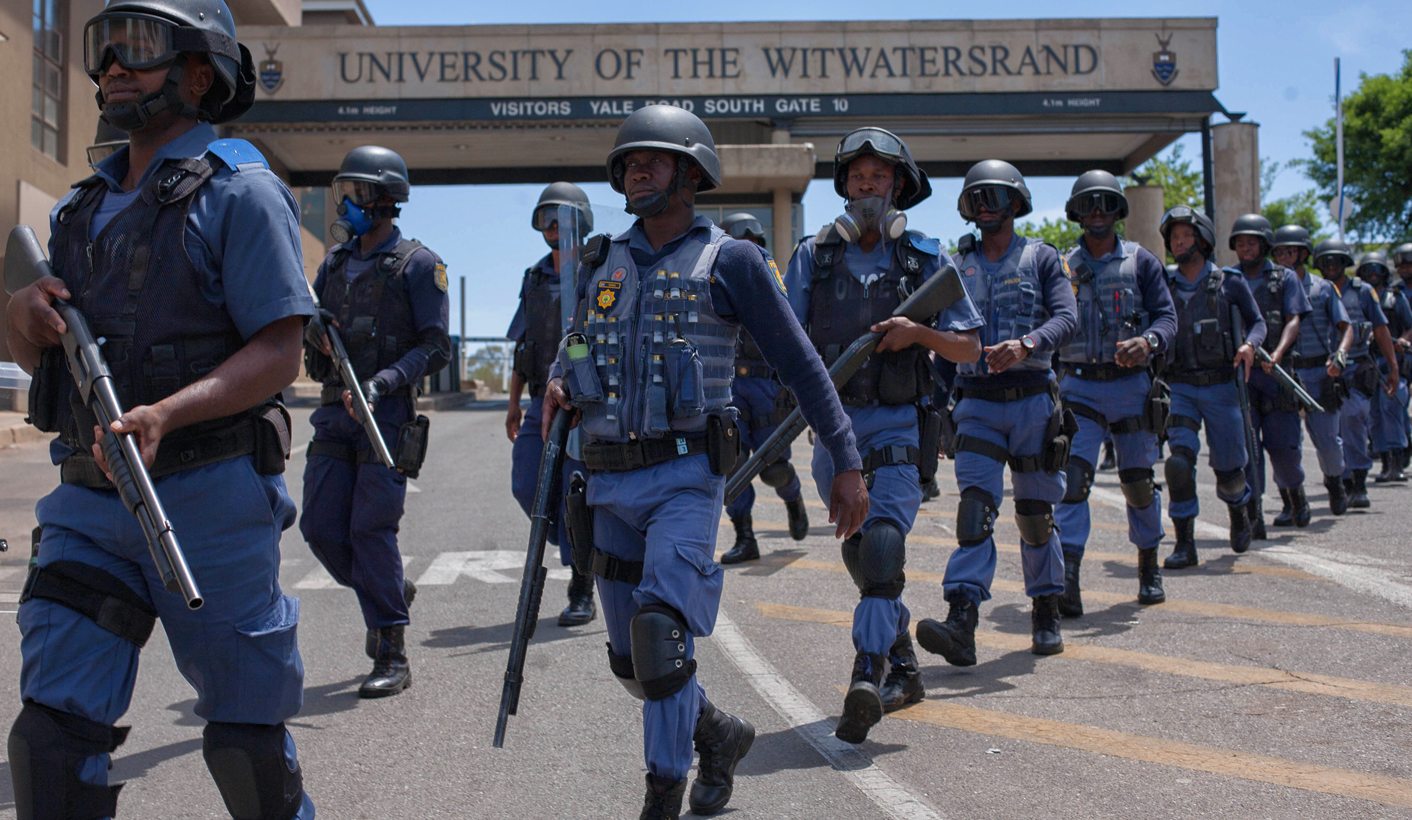 Students and police once again faced off at the University of Witwatersrand on Tuesday. As police and security measures increase on campuses across the country, protesting students have a decreasing space to push their demands, but some remain resolved. By GREG NICOLSON.

As students sang and prayed inside the Holy Trinity Catholic Church on Tuesday, Busisiwe Seabe, a Wits Fees Must Fall leader, said the space for students to demonstrate was closing. She warned students would respond with militancy to the heightened tensions since police and private security arrived on campus. Demonstrating students say violence only began after the security measures were introduced, and some students might now target university infrastructure.

With the academic year fast coming to an end, some universities have called on police and private security to help quell protests and keep campuses open. Campuses have been able to continue studies under heavy policing, but it has put students demanding free, quality and decolonised higher education in a corner, placing the university at the centre of the showdown while government fails to consider student concerns seriously.

“With the police on campus, the state and the university can expect militancy from students,” said Seabe, claiming marches were peaceful until they arrived. “Now we can’t even march. What we have to do is duck and dive bullets.”

Photo: Some protesting Wits students managed to get shields and helmets from private security guards and moved to confront the police before they were dispersed with a water cannon. (Greg Nicolson)

Wits resumed its academic programme on Monday and a huge police contingent was deployed to its main campus on Tuesday, with running battles between students and cops. Around 40 riot police marched around campus in formation in the morning, all heavily armed with non-lethal crowd control weapons, with at least one officer carrying a rifle. Around 100 protesters then began congregating outside the Great Hall, some singing while others prepared rocks to throw. As soon as students started throwing rocks, the police moved in to shoot stun grenades and rubber bullets.

Protesting students dispersed, police pursuing them, facing off once or twice more throughout the day. One incident saw a small group of protesting students take shields and helmets from private security guards and march towards the Great Hall, but they were dispersed as a police water canon fired on them and cops pursued, firing rubber bullets. Wits has handed operational control of its security over to the police.

Photo: Police at Wits on Tuesday used a water cannon on non-protesting bystanders. A woman who said she was a Wits worker complained to SAPS officers after being sprayed. (Greg Nicolson)

In the afternoon, police officers, behind nyalas and the water canon, amassed outside the Great Hall in a show of force. No protesting students were in sight, but the water canon fired water indiscriminately at workers, journalists and students watching nearby.

“They shot me with water, for what?” yelled Nomathemba Dlamini, an older woman who said she was a worker at Wits. She later confronted police, asking what they had done to provoke the attack. “It’s one thing to shoot at us, not our parents,” said a student. “I don’t understand why they’re putting water on us. We have no stones, nothing,” said another, who said she had a tutorial to attend in 10 minutes. “Now they want to shoot at us. Why is [Vice Chancellor Adam Habib] doing this… It’s not right. It’s not fair.”

Photo: Police at Wits on Tuesday made their presence felt. Cops move people back while a student is held outside the Great Hall. (Greg Nicolson)

Before Daily Maverick got the students’ names, stun grenades were fired and police officers marched forward forcing back anyone in sight. Dlamini sat by the university’s Yale Road, and cried. “They’re old women, but they’re unruly,” a SAPS officer said back outside the Great Hall. After another brief confrontation with protesting students, some normalcy returned to Wits, still under heavy police guard, with fewer students around than usual.

The university on Tuesday afternoon said the majority of academic activities went ahead and classes would continue on Wednesday. It said students stoned cars outside the management campus in the morning, where one student was arrested, and tried to disrupt lectures at the education campus. A bomb scare threatened a building on the main campus, but it turned out to be a firecracker in a parcel. “We are open to engaging with students from all societies and mediators to try to find a negotiated settlement,” said a statement from Wits. While discussions through mediators are said to be going ahead, the university said students had declined offers for an imbizo. While both parties, and mediators, have pushed for discussions, attempts have failed after disagreements over details, worsened by a trust-deficit on both sides.

As the academic year comes to a close, universities appear to be increasingly reliant on the police to stay open, which has led to the current stand-off. Violence, from both police and students, can mobilise protesters, but for students, it’s tiring, carries potential criminal charges, and can isolate sympathetic supporters who don’t want to be on the front lines.

Seabe said on Tuesday that, in fact, six students had been arrested. They had planned to march to the National Treasury, along with students from other universities in Gauteng, but could not march after they met a large SAPS presence. Police arrested two students in the morning, then let one go, and when other students tried to free the remaining detainee from the SAPS van, five more students were arrested, she said. The police have targeted the Wits top six student leaders, hoping their arrests would end the protests, Seabe continued. They even raided the Holy Trinity Church trying to catch them, she added.

Acting Police Commissioner Kgomotso Phahlane has played down the violence at higher education institutions, saying it’s far from a state of emergency and maintaining his officers have continually exercised restraint. Student leaders have seen some of his comments as suggesting police will use live ammunition if necessary. “Part of the agenda of those who have infiltrated is to drive us to a point where someone is killed by police so that they could prove a point,” the acting commissioner was quoted.

The demand for free education lands with government, but universities have been used by students as points of leverage, where they are also fighting other, campus-specific issues. President Jacob Zuma on Tuesday announced a ministerial task team would assist “to normalise the situation at higher education institutions”. “Government reiterates its full commitment to promoting access to higher education for the children of the poor and the working class,” said the presidency statement. The task team, however, did not mention the demand for free education; rather it referred to the aim to “normalise” and while including most ministers in justice, security and police, it excludes the finance minister. Protesting students have already rejected the commission of inquiry into higher education funding, and Zuma’s latest task team comes with less of a mandate amidst a climate of declining trust.

The immediate future of Fees Must Fall will likely depend on what happens at the former white universities. They get the media attention and will need to mobilise more students, and collaborate with other institutions, for their demands to be taken beyond commissions and task teams. Given the challenges with security and police, it won’t be easy, but isolated students could, and are likely considering, setting buildings alight.

Photo: The Trinity Church, next to Wits, has been a refuge for students. Volunteers like Lenah Vilikazi and Yvonne Moloelang helped provide them with food. (Greg Nicolson)

At Trinity Church on Tuesday, after the songs and prayers, students went into a meeting to discuss the way forward. A statement from the Society of Jesus said Father Graham Pugin, who was shot in the face with a rubber bullet by police at the church on Monday, was recovering.

Seabe said Wednesday would be an important day, but in the face of intense security and policing, prayers may not be enough to give protesting students a way forward. Whether police manage to quell protests or not, the future of South African universities depends on engagement. Protests will continue, if not on Wednesday, in the future. DM

Main photo: There was a large police presence at Wits on Tuesday, with the SAPS cracking down on any potential protests (Greg Nicolson)