Review: The World According to Zille 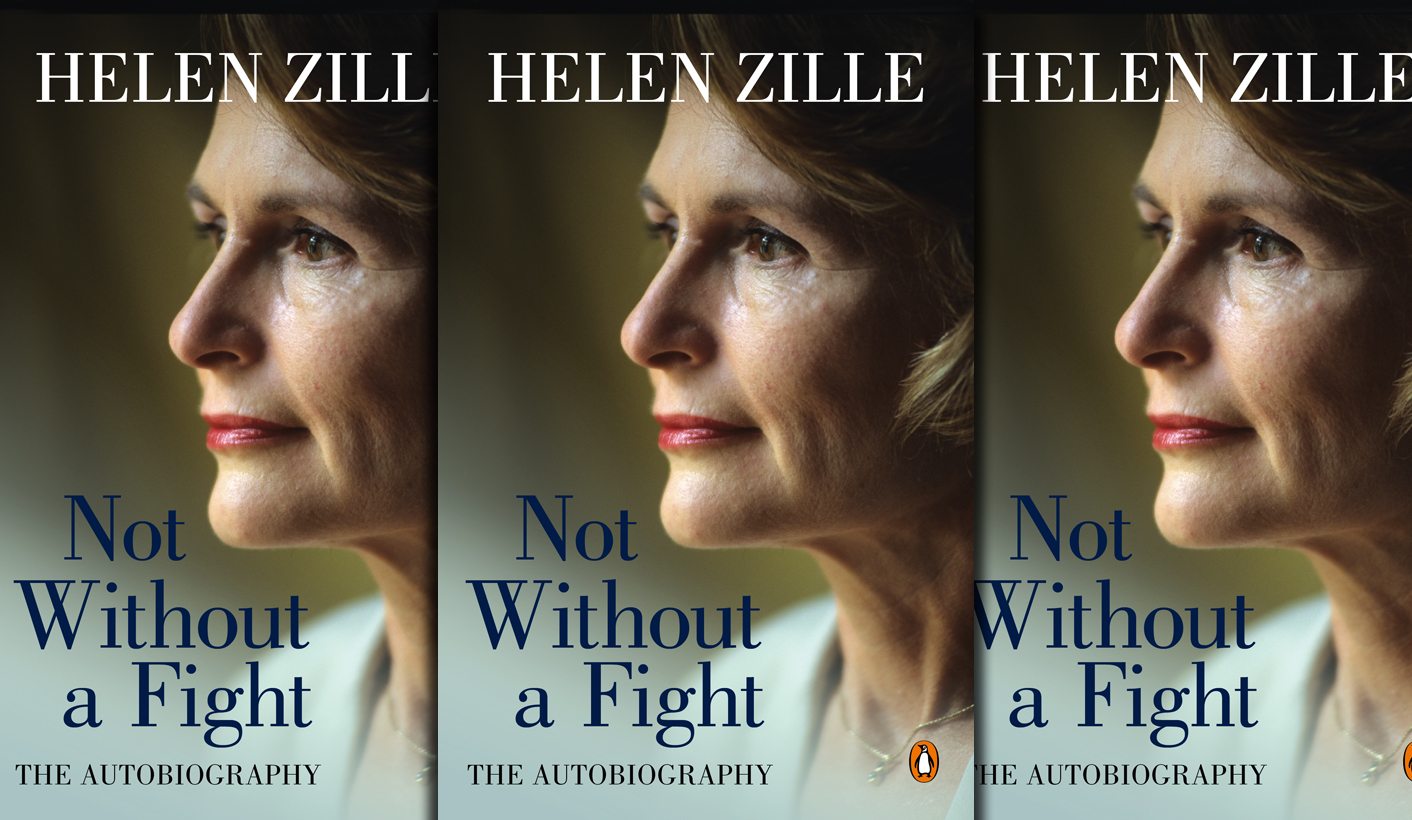 Helen Zille has done a formidable job of weaving together her personal and political lives in a highly readable work. It’s revealing, colourful, scathing, and more than a little exhausting. By PALESA MORUDU.

By the time I finished Not Without a Fight, Helen Zille’s autobiography, I was exhausted. But not by the writing. Zille, who started out as a journalist, weaves an interesting story. She accounts for her life with pace, clarity, drama, suspense and humor – and it’s a good tale.

Indeed, her opponents, both within and beyond the Democratic Alliance (DA), might say that this is a work of fiction. Those accusations will surely come in the weeks ahead, and this review cannot test their veracity. But I can say that Zille has done a powerful job of bringing together her personal and political lives in a highly readable work. A pertinent question here is whether most readers will appreciate the sometimes mind-numbing level of detail, which brings the book to 510 pages.

Zille describes her heritage, the hardships and survival of her immigrant parents, her complex relationship with her mother and her deaf sister, her struggles with anorexia, her love life, and her notable contributions to South African journalism. As a reporter for the Rand Daily Mail, she broke the story of Steve Biko’s murder by the apartheid regime.

But what stands out is her celebrated political career in South Africa’s main opposition party, the DA. The picture is most revealing. If you thought the African National Congress (ANC) was the only organisation riven by factions and greed, you were wrong. The DA, it emerges, is a snake pit of egos, naked ambition, factional politics, and perpetual plotting. In other words, not so different from the rest.

The significance of her Jewish heritage was impressed on her during a May 2015 Holocaust memorial service in the Jewish cemetery in Pinelands, Cape Town. There she heard 93-year old Holocaust survivor Ella Blumenthal speak about losing her entire immediate family – 23 people – in the Nazi concentration camps. Blumenthal had her tattooed concentration-camp number surgically removed after settling down in South Africa. She would tell her children that the scar was the result of “an accident”.

Zille recalls how her own paternal grandmother told her and her siblings as children that members of her family that appeared in a portrait that hung above her bed had simply “died”. Through the help of a genealogist, Zille came to discover the many members of her family who were murdered by the Nazi regime. Her maternal grandfather was saved from a Gestapo prison by his prominent non-Jewish wife after he was picked up during the Kristallnacht, the infamous 1938 pogrom that foreshadowed what was to come.

Zille’s parents seemingly preferred not to burden their children with their loss. Zille says she often wondered “why Jews who escaped the Holocaust seemed so determined to bury their experiences”. It was, however, an experience that helped her parents to ground their children with a strong sense of justice.

The personal in Not Without a Fight is the unknown Zille. It is the feisty nine-year-old who defies her mother and visits with a group of friends at night, only to be “arrested” by cops as they walk back home at 3:00am. It is the rebellious teenager who didn’t “fit in” at a posh English-speaking school, who smoked, was addicted to current affairs and had a boyfriend at the age of 14. It is the insecure young woman who, because she craved attention from boys, starved herself and developed severe anorexia. It is the young woman who is scared to love because heartbreak is far worse than falling in love. It is the daughter whose mother suffered from depression, and a sister whose sibling has a lifelong disability. It is a young mother who suffers post-natal depression twice. It is also a caring wife who loves her devoted partner and their two children.

The political in Not Without a Fight is Zille, the known quantity. It is the political reporter who famously broke the Biko story, and later became a politician. It is the Black Sash anti-apartheid activist who (until now less well known) sheltered underground uMkhonto We Sizwe activists at her home. It is the head of a school governing body who took the fight to the South African Democratic Teachers Union. It is the liberal activist who, even though she sheltered ANC fighters from the police, distrusted the party of liberation so much that she couldn’t vote for it during 1994 elections.

Zille writes that she already wanted a strong opposition to the ANC. The book is testimony to her strong views that power has to be checked by competition. She defends the idealism of liberalism. Her world view may be summed up by the concepts of meritocracy and a functional state.

What is sure to garner perhaps the most public interest, however, is the inner workings of the DA as it negotiates coalition politics in the Western Cape. Here the book reads like a movie script. All the elements are there: apartheid-style spying, colourful personalities, the Cape Town underworld, dirty money, manipulation of the media and the justice system, backstabbing and sexy blondes – all describing an unhealthy and often comical lust for power.

Zille is forthright about the culture of deceit and manipulation that prevailed while she was rising through the ranks, and even when she led the DA. She fell out with Tony Leon – who she says was “captured” by the NNP – and had a particularly spectacular fall out with up-and-coming DA MP Lindiwe Mazibuko.

She is particularly scathing about Mamphela Ramphele and her “Oscar de la Renta perfume”. Zille was stung, as she tells it, by Ramphele’s haughtiness and double dealing in their attempt to put the latter at the head of a DA ticket so they could present a black leadership to the public. To her credit, Zille blames herself for this debacle.

She says her exit from the DA leadership was part of a grand plan put together with Ryan Coetzee. The party is going into the next phase of growth and is consolidating in the middle center. The so-called left in South Africa is in utter disarray as the party of liberation implodes. Zille seems to have seen it coming from a mile away.

But the DA is now a party full of the young (black and white), and the ambitious, with a shaky ideological foundation. This is a blessing. It may also be a curse. As the author points out, it is easier to govern than to run a political party.

Not Without a Fight is, of course, Helen Zille’s view of the world. That is its strength and its weakness. Her self-confidence is often supported by acerbic argument. Not a few have come to see this as arrogance. She holds very strong views just about everything and is not easily persuaded by different opinion. She is, for example, dismissive of the concept of “whiteness” and “blackness” and worries that an American import, critical race theory, has become the dominant tool to diagnose what ails SA.

These concepts, which some of us might refer to as narrow nationalism, may well be problematic. But ironically Zille, who is well-grounded in history, lacks an appreciation of history in an important sense. She fails to see that it is impossible to build a non-racial South Africa unless race is at the centre of restorative justice.

While I differ sharply with Zille on her political outlook, she comes across as forthright and competent. She is probably better at governing than at politics. DM

Palesa Morudu is MD of Cover2Cover Books and Director at Clarity Editorial.