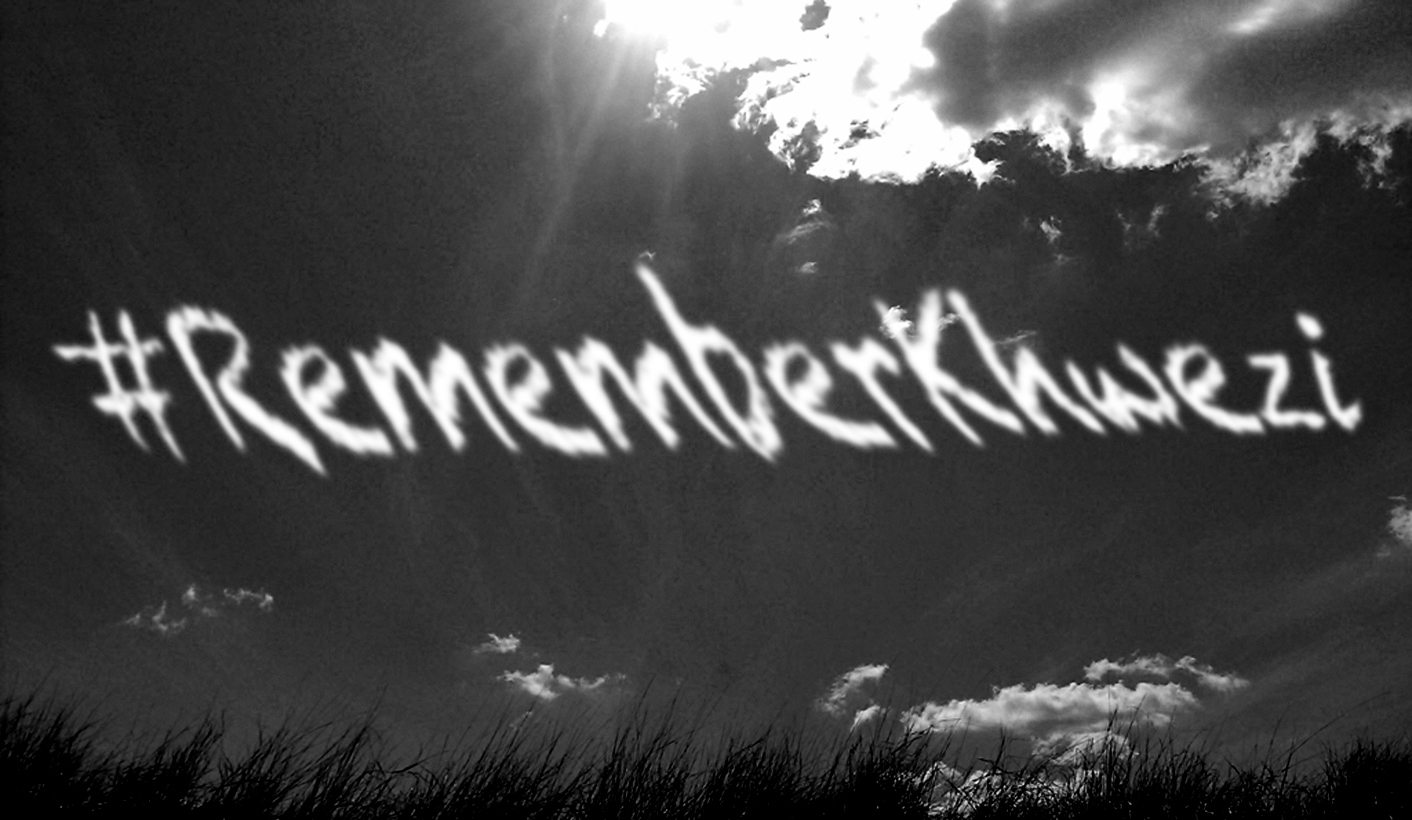 She was only 10 when her father, Judson Kuzwayo, ANC stalwart and a man who had spent 10 years as a Robben Island prisoner alongside his friend and comrade, now President Jacob Zuma, died in 1985 in a car crash. In 2005 Fezeka Ntsukela Kuzwayo became known as Khwezi, forced to conceal her identity to avoid a witch hunt by supporters of Jacob Zuma whom she had alleged had raped her. After Zuma’s acquittal Fezeka again fled into exile when she and her mother were attacked and vilified. On Saturday Fezeka died in Durban, just as she was getting her life together. By MARIANNE THAMM.

There is a tragic symmetry to the fact that Fezeka Ntsukela Kuzwayo’s life ended in the dying days of the destructive Presidency of Jacob Zuma, a man she once regarded as an uncle and substitute father and whom she accused of raping her in 2005. After Zuma’s acquittal (Zuma had said the sex had been consensual) Fezeka, who was diagnosed with HIV in 1999, and her ageing mother, Beauty Sibongile Kuzwayo, were offered asylum in Holland when Zuma’s supporters burnt down their home and threatened to “burn the bitch”.

Fezeka died suddenly at her home in Durban on Saturday. The cause of her death at the age of 41 has not been disclosed.

“The news is absolutely devastating. It is a terrible tragedy. I spoke to her and her mother recently and she was just getting her life together again,” said former Minister of Intelligence Services, Ronnie Kasrils, who knew Fezeka when she was a child in exile.

Kasrils and Zuma were often cared for by Fezeka’s parents when the two men, who were in the ANC underground, passed through Swaziland where the Kuzwayos were based after Judson’s release. It was Kasrils Fezeka called first after the alleged rape by Zuma in the spare bedroom of his Johannesburg home on the night of Wednesday 2 November 2005. Zuma’s daughter, Duduzile, was in the house at the time.

“We should never forget her name. Fezeka Kuzwayo. Her life was completely smashed in 2005/2006. She was abused, hounded and castigated. It broke her. Her house was burnt down. But she was rebuilding her life again with a small group of friends who supported her and her ailing mother,” Kasrils told the Daily Maverick.

Recently Kasrils established a trust for Fezeka with the R500,000 settlement from a court victory in a defamation case against Deputy Minister of Defence Kebby Maphatsoe who had claimed that Kasrils had orchestrated the rape charges against Zuma and that Fezeka had been sent as a “honey trap”.

“Fezeka stands as a symbol for all of us who are abused in this violent, disgusting and patriarchal way. She is an example of what we must not do. We must show solidarity with those who are vilified for speaking out. I grieve her passing as I know we have been robbed of someone who could have made a fantastic contribution to society,” said a distraught Kasrils.

The “One in Nine” Campaign which was formed in 2006 in the aftermath of Jacob Zuma’s rape trial issued a statement on Sunday that it was “devastated by the passing of Fezeka Kuzwayo”.

“Despite the characterisation in the mainstream corporate media and in court, Fezeka to us was a feminist, an activist, a teacher, a sister, a friend, a colleague who inspired people close to her and women who only knew her as Khwezi. She reminded us and will continue to remind us to always speak truth to power,” read a statement.

In August a group of students staged a silent anti-rape protest at the IEC results centre in Johannesburg as President Zuma rose to speak. The four women held five handwritten pieces of paper which read “I am one in three”, “Ten Years Later, “Khanga” and “Remember Khwezi”while the oblivious President Zuma rambled through his speech. It was an election which saw the ANC that Zuma leads lose three significant metros to the opposition.

At the time Fezeka was reported to have said that she was thankful for the solidarity shown.

Fezeka Kuzwayo led a life of hardship in exile after the death of her father. She had been abused and raped several times. She returned with her mother to South Africa from Zambia in 1990 shortly after the release of Nelson Mandela. It was then that Zuma became, for her, a second father, she told journalist Kees Broere of de Volkskrant in 2007.

Fezeka’s and Zuma’s paths crossed again in 2001 when Zuma was Deputy President and he began “to tell me stories about the kind of man my father had been”, she told Broere.

Later, while working for an AIDS NGO, Fezeka had connected with Zuma who was Chairman of the National Aids Council at the time.

Author Mmatshilo Motsei, in her 2007 book The Kanga and the Kangaroo Court – Reflections on the Rape Trial of Jacob Zuma, writes that Fezeka’s voice “is almost erased in our hearts as we become like the citizens of Hamelin following the piper from one rendition of Umshini Wam to another.”

Two years after the book’s publication Jacob Gedleyihlekisa Zuma, having escaped rape and corruption charges, became the President of the Republic of South Africa. Motsei opined at the time that the justice system in South Africa “has had no impact on awakening the nation from its moral and spiritual stupor….”

She also wrote that because of his strong belief in ancestors Zuma must have known that “the wrath of the spirit of his comrade” – Fezeka’s father – “who died in exile leaving behind a distraught 10-year-old daughter, might come to haunt him [Zuma]”.

In August it happened with the #RememberKhwezi protest during a live television broadcast as the nation watched.

Fezeka Kuzwayo, a child of parents who sacrificed much and who offered their lives for freedom, never knew freedom in her own country and in her own lifetime. After Jacob Zuma’s rape trial both Fezeka and her mother were forced into exile in Holland. They returned in 2011.

The supreme irony is that the pain in the second part of her tragic life was meted out by a man she regarded as her father, a man who today still occupies the supreme seat of power in the country, the President of the Republic of South Africa.

Her Twitter account, which she opened in 2011 – @FezekaKhuzwayo – describes her as “a free spirit over and over again. Daughter of freedom fighters and very independent.” On 26 May 2011 she tweeted, “I may never be free from the agony of your treachery/but will forever cherish the freedom to speak that my father got murdered for”.

Fezeka Ntsukela Kuzwayo’s suffering has come to an end. She too is an ancestor now, one whom all those who are victims of abuse will no doubt conjure when we need strength or an example of how to take on the powerful and the shameless. RIP, Fezeka. We will remember you. DM