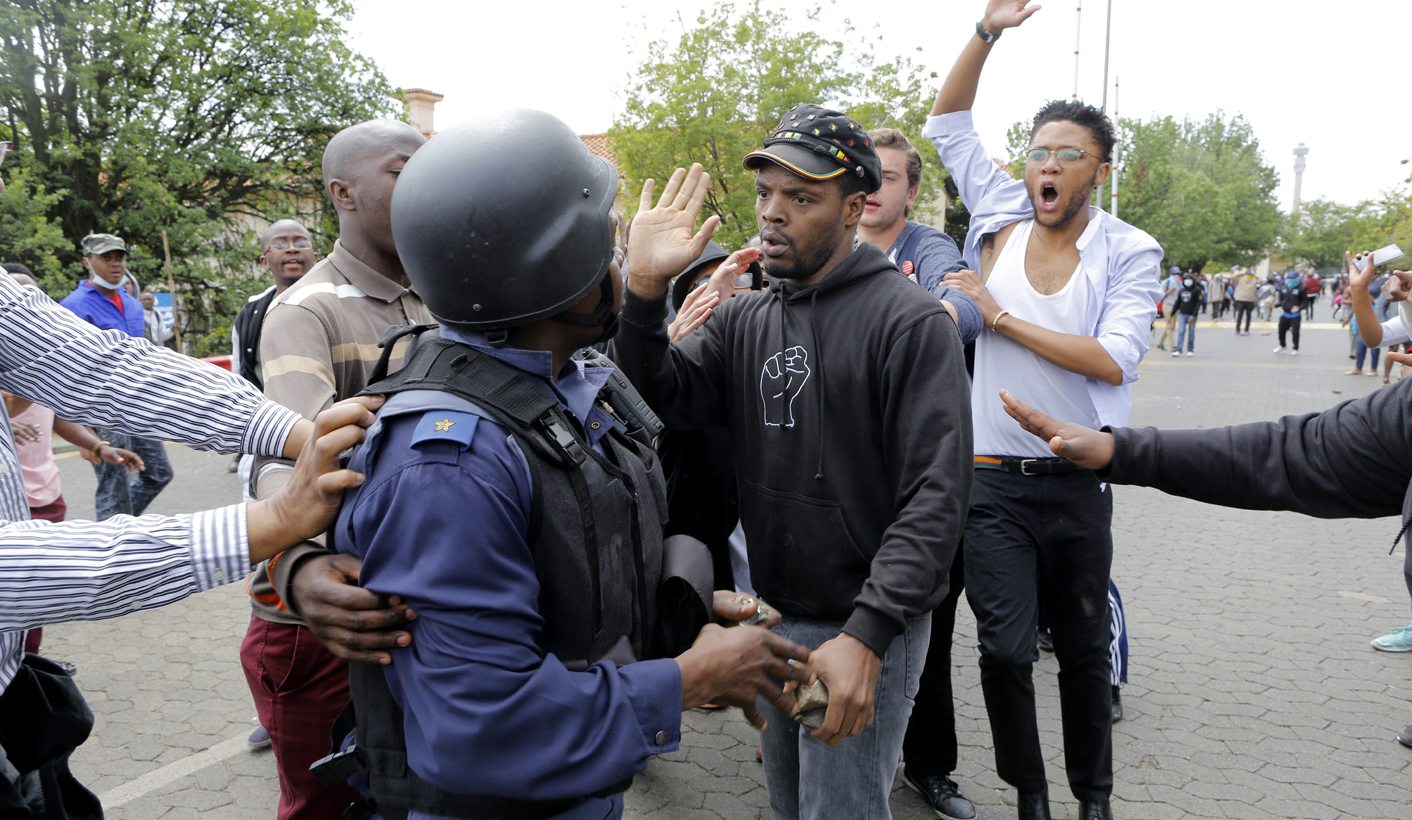 Protests at elite, urban universities continue to dominate the national focus. While what’s happening at many campuses is under-reported, the intense focus on some institutions could lead to a solution to the Fees Must Fall deadlock: getting past respected leaders involved in order to bridge the trust divide. By GREG NICOLSON.

There were no cameras present when 16 University of Johannesburg (UJ) students appeared in the Lenasia Magistrate’s Court on Wednesday. They were charged with public violence. Before they appeared, the court heard a case of three men charged with robbing a Telkom store with a gun. The three were ushered out by normal court police officers as the students were brought to the docks by the SAPS’s Tactical Response Team.

Students around the country continue to demonstrate, yet only a few campuses get national media attention. The University of Witwatersrand (Wits) and University of Cape Town (UCT) continue to dominate the news and that attention is leading to potential new avenues to break the impasse over higher education funding. Other universities receive limited attention and rely on students at more urban and elite institutions to take their programme forward.

Outside the court, UJ SRC leader Onwabile Lubhelwane said students are fighting to transform the university’s culture, for free education, and for private security officers to be removed from campus. Lubhelwane had spent days in hospital, he claimed, after private security guards beat him with bats.

Owen Mabunda, UJ’s Soweto campus South African National Students Congress (Sasco) chair, said demonstrating students were singing on Tuesday and trying to mobilise students around campus but were blocked by security and police. They were ordered to leave campus and when they argued the arrests began. “They were just picking everybody,” he said. Later, as students gathered, Mabunda blamed private security for further clashes and said students were picked up, pushed and assaulted.

At court on Wednesday, there didn’t appear to be any other journalists in the Lenasia courtroom and the students had not been able to arrange an attorney in time for their hearing. Their lack of representation showed. The state did not oppose free bail for 15 of the students, but said one student had an outstanding charge. When the court asked each student if they had previous charges or outstanding charges against them, one said he was “not sure”. The 15 students were released on free bail while one will have to make a formal bail application. The case was postponed until October 31.

Nomsa Sola’s son was one of the young men arrested. He was waiting for a bus from the Soweto campus to UJ Auckland Park. She said he wasn’t allowed a call after his arrest and on Tuesday; after he didn’t come home, she went looking for him and opened a missing persons case with the police. She only found out on Wednesday from other students that her son had been arrested. She was incensed that arrested students were detained in Kliptown but their case was heard in Lenasia, leaving many with difficulties of affording to return to campus.

Sindisiwe Dhlamini’s son was also arrested. She’d heard her son had seen other students detained and had said it was unconstitutional. He quoted Karl Marx.

“You know too much. Go inside,” the police allegedly told him as they pushed him into the van. UJ Soweto students were still deciding on a way forward on Wednesday afternoon.

As issues at campuses like UJ Soweto have been under-reported, the intense media focus on Wits and UCT has shifted public sentiment and university management’s responses. On Tuesday, images of police cracking down on students at Wits (the institution has an interdict against protesting, like at UJ and other universities) were broadcast live. Violent clashes at Wits were broadcast live on TV. Nationally known personalities intervened. On Tuesday night UCT students demonstrated, with a handful arrested.

Musician Simphiwe Dana sang at Wits. Dali Mpofu, EFF national chairman, was by her side. As a former leader of the Black Student Society, Mpofu said Wits alumni had a key role to play.

The student protests have been defined by deadlock since widespread demonstrations began after Higher Education and Training Minister Blade Nzimande announced that fee increases for the poor and “missing middle” would be covered by the government for 2017. Students began protesting again, demanding government commit to free higher education.

Independent Electoral Commission Vice Chairman Terry Tselane was also at Wits on Tuesday. “The cause they are fighting for is a noble cause that should be supported by everybody, by every South African. I was supporting this cause irrespective of whether I’ve got a child or not at Wits University,” said the former Wits leader.

Interventions from the likes of Mpofu and Tselane had an immediate impact. Wits on Tuesday evening said it would reopen on Wednesday, following management’s belief that most students wanted to continue with the academic programme. After meeting with the former leaders, acting as mediators, Wits said it would close until next week, potentially avoiding a repeat of Tuesday’s violence.

Many other campuses across the country have closed or are trying to remain open despite protests.

While there are many students who want to continue their studies and complete the academic year, as shown by the Wits poll and demonstrations calling to continue studies, protesting students, even if they’re in the minority, have shown enough resolve and drawn enough numbers at some campuses to have their voices heard. Mpofu and Tselane may have provided a model for ongoing engagements: if alumni and influential South Africans get involved, channels of communication may break the deadlock.

At campuses like UJ Soweto, this seems unlikely. But the consequences of not trying are too high for leaders to continue to stand on the sidelines. DM

Photo: Students from Wits University clash with a policeman during ongoing protests against the cost of higher education in Johannesburg, South Africa, 04 October 2016. EPA/KIM LUDBROOK