Cape Town: No lectures at CPUT, but UWC and UCT open 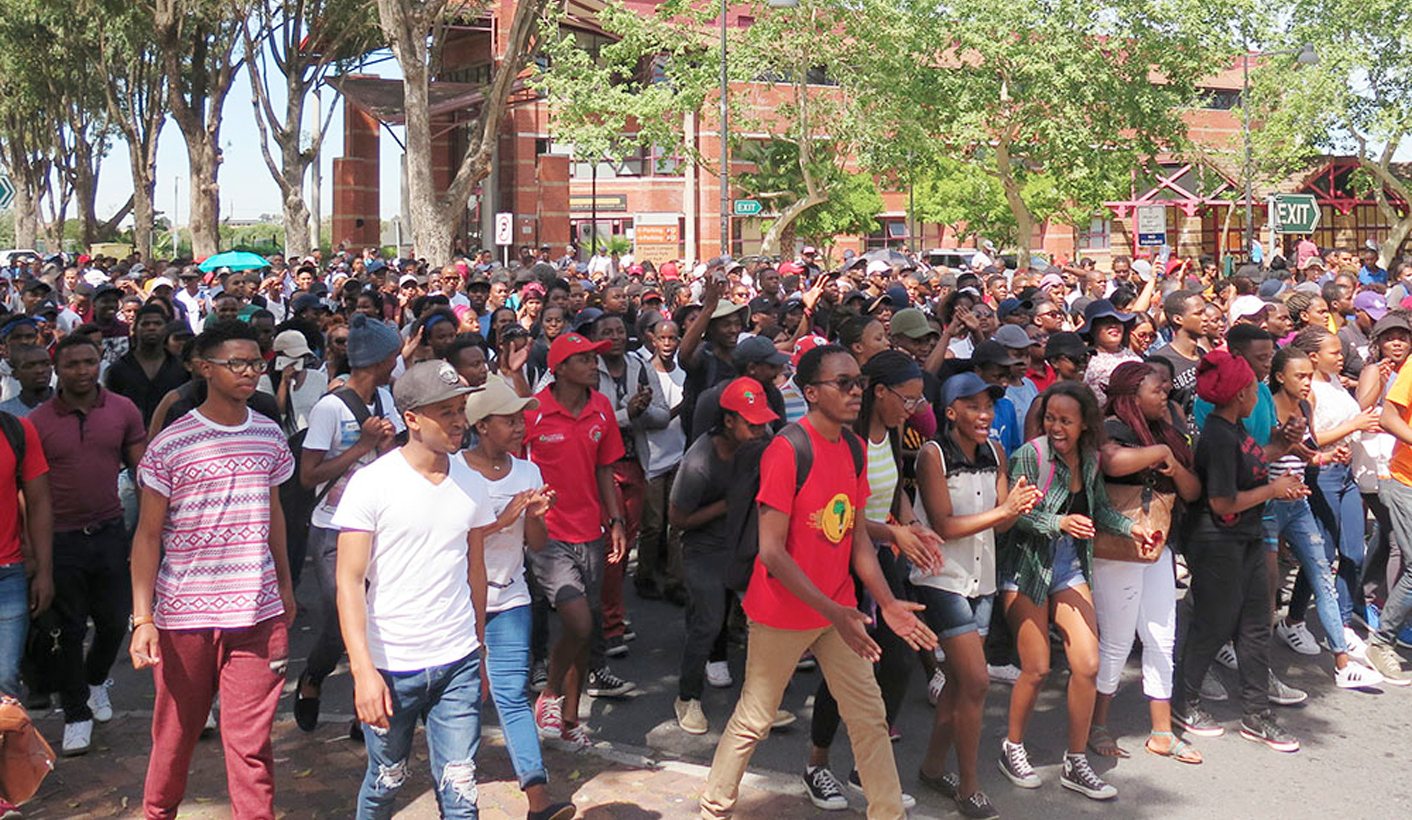 Classes were suspended on Tuesday at the Cape Peninsula University of Technology (CPUT) in Bellville and Cape Town, but the University of Cape Town and the University of the Western Cape were open, though some lectures were disrupted by protesting students. By David Doochin, Ashleigh Furlong and Ashraf Hendricks for GROUNDUP.

A few hundred protesting CPUT students mobilised support this morning in their Bellville residences, calling for a meeting in the sports centre.

During the meeting, CPUT student leader Lukhanyo Vangqa said students would not allow themselves “to be divided by petty party politics”, echoing a call made yesterday by protesting students at the University of the Western Cape (UWC).

Vangqa told the crowd that the students’ fight included the “emancipation of the poor, the destitute and the downtrodden”.

He said that the plan was to move to the Cape Town campus to mobilise support there. Then they were going to go to the High Court to attempt to secure an interdict to prevent the university from suspending students and shutting down residences, as well as to stop police from acting violently towards protesters.

At the Cape Town campus, where classes were also suspended, protesters marched to a residence to rally students, then to the amphitheatre, where they chanted and danced in a circle. They went on to the student recreation centre, where more than 300 people had gathered to chant and cheer.

“The VC (vice-chancellor) has declared war upon students. So now it is time for students to declare war upon the VC,” he announced to students. “It won’t be easy … but we are willing to accept the challenge.”

Another student leader who wanted to be known only as Eddie, said protesting was the only way students could convince the government to listen.

“We have to carry on with the struggle and shut down the campuses until further notice until we get what we want as students.”

At UWC, protests continued with small groups blockading entrances to the campus from about 7:30am with logs, bins and rubbish. Some sat on the ground.

However students continued to arrive for class and it appeared the university was still operating. By late morning, the number of protesters had grown and the protesters began to enter campus buildings, to urge staff and students to leave.

Many of the buildings they entered were already empty and the doors inside locked.

By lunchtime most students who weren’t protesting seemed to have gone home and the protesters went around the campus again to check if any departments had attempted to reopen.

At one point, GroundUp was told to stop videoing the protesters and to delete the video. But a protester who appeared to be leading the students approached and told us that we were allowed to take photographs.

UWC management said in a statement that while there had been some disruptions this morning, “the academic programme continues as usual” and “all operations on campus are continuing”. Staff and students were told to “remain focused in preparation for the forthcoming examinations”.

At the University of Cape Town, a few hundred protesting students and workers made their way through campus today disrupting several classes.

Early in the morning protesters had tried blocking the north and south entrances, but were dispersed by private security guards. A student could be heard saying “private security are kidnapping students”.

Protesting students and workers marched through the campus and gathered outside Bremner building where they were watched closely by private security. Student leader Athabile Nonxuba told the crowd of at least 100 that students should maintain the shutdown until their demands were met.

Most campus activity went on regardless of the protest.

At the Faculty of Health Sciences (medical school), the student movement of the Health Sciences Faculty called a press conference to announce that their demands, including no private security at medical school, had been met. Students said they would end their two week occupation of the dean’s office.

“We are still part of the national shut down, calling for free decolonised education” said medical student Thandani Mlambo during the conference.

In a letter to staff and students, UCT vice-chancellor Max Price said the university was open and “most operations” were continuing.

All deans and executive directors supported the return to classes, he said.

Two students had been arrested, Price said, one of whom was in breach of an interdict against being on campus. “This brings the number of students arrested this week to eight. We have also begun internal disciplinary cases against these students.”

Price said the university had received complaints of sexual harassment and racial profiling by private security guards, which was “utterly unacceptable and regrettable”. He urged anyone with knowledge of such incidents to report them. DM

Main photo: At the University of the Western Cape, protesting students disrupted some classes but most lectures continued, the university said. Photo: Ashleigh Furlong