Student protests: Only the start of greater pain 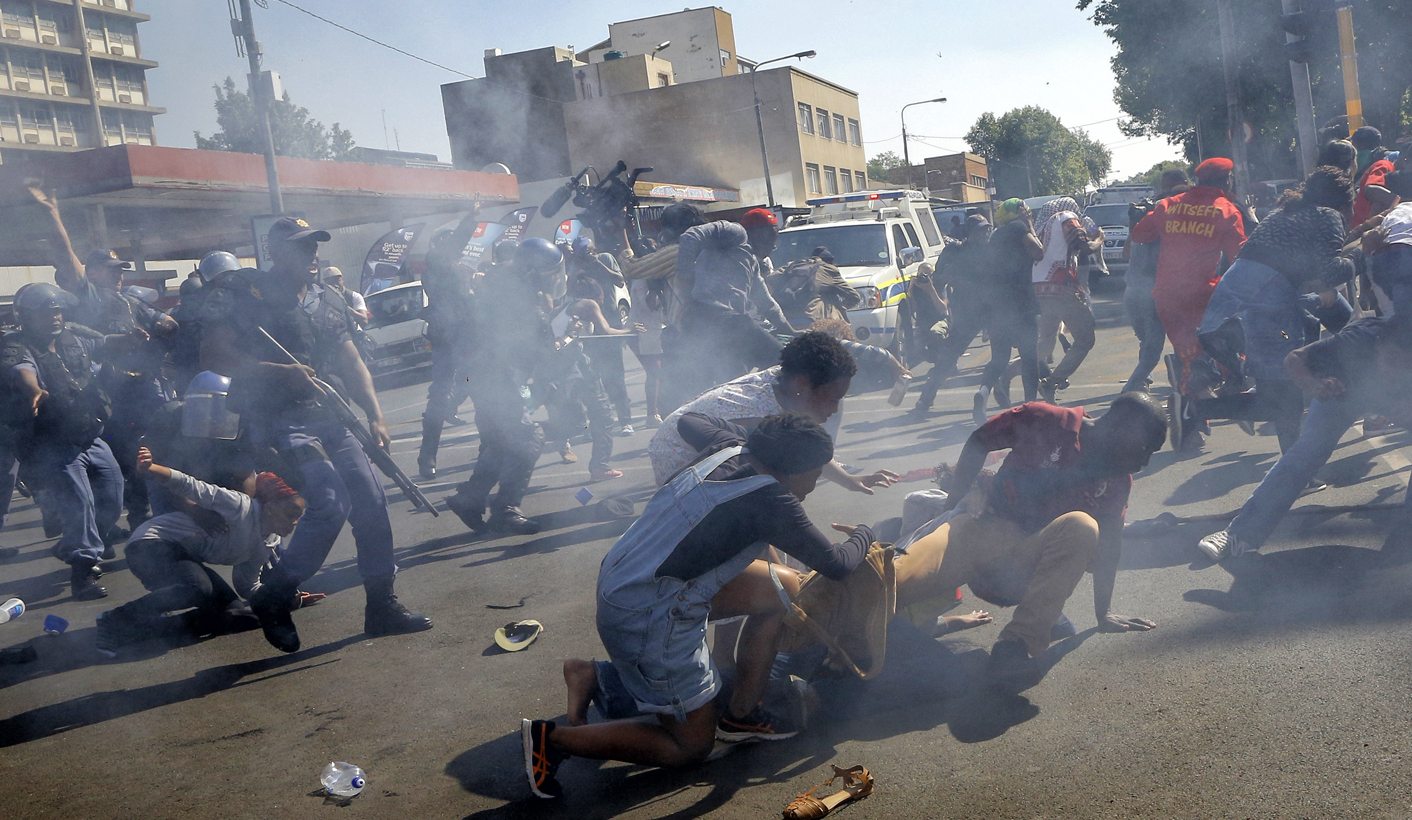 Despite government efforts, we should have seen the most recent student protests coming. The country is fractured, still disadvantages the majority, and even if temporary measures quell current protest, it will not be the end, says GREG NICOLSON.

Announcing his recommendation on fee increases last week, Minister Blade Nzimande was careful to list efforts in higher education and training. Despite the struggling economy, his department’s budget would rise from R42-billion in 2015/16 to R55-billion in 2018/19. Government paid R1.9-billion of the R2.3-billion shortfall after the state said no students would pay tertiary fee increases in 2016. More than R4.5-billion was re-prioritised to the National Student Financial Aid Scheme (NSFAS) this year. The National Skills Fund has allocated almost R1.4-billion for 2016.

“It is indeed a fine balancing act and we must all participate,” he said, “whether at the national level, in university administrations, or as student leaders – because it is the nature of balancing acts that if one falls, all fall.”

Two days later, students at the University of Witwatersrand edged towards police officers enforcing an interdict limiting student protests. We’re fighting for your children, they told the cops. Kill us like you killed people in Marikana. And, after the police set off stun grenades and fired rubber bullets, some students retaliated with rocks, saying: I hate White people.

The democratic government is spending billions to uplift the lives of the black majority, but those lives often exist on the bitter dregs of a society designed to exclude, with competing debts the state cannot pay and struggle to prioritise. The democratic hope for dignity has not been met, leading here, where change is a universal demand. The how and how fast is a national knot still unravelling.

Fees Must Fall is about how a democracy deals with a history of oppression. It’s about healing broken bones, about a generation’s phantom limbs and its children refusing amputation.

Only about half of the students who start primary school make it to matric, with failure rates higher in rural provinces. The number of matric students who qualify for university studies remains low. The number of black students at universities has risen, but as a proportion in comparison to other racial groups it still remains low. Statistics differ, with the statistician-general saying there are still far too few black graduates. Others have lauded the huge increase. Black graduate unemployment remains at about 9% compared to 3% for whites.

The education system, despite progress, is still stacked against black students, starting from primary school. If black students qualify for university, NSFAS still does not cover all deserving applicants and black families who do not qualify for funding will use a greater proportion of their income, or take on debt, to cover study costs. Unemployment for black South Africans is far higher than whites, they have far fewer private company executive positions, much less control of the country’s wealth, and own far less land. The democratic project’s achievements often come with reports of racism, as blacks start to enter white spaces, in high schools, universities and businesses.

Protesting university students have continually linked their cause to race. Speaking at the Wits medical campus on Monday, former SRC president Mcebo Dlamini spoke more about reports of racism at the institution than fees. “Decolonisation” is repeated at protests. Essentially, demonstrating students say universities don’t reflect the demographics or cultures of the black majority.

“We can’t breathe” is a phrase often cited by students. Black students have to struggle or be extremely lucky to get into university and face family financial pressures or be lumped with future debt. By their nature, universities reproduce past knowledge systems before they create new thoughts, meaning black students are not only usually taught by whites but taught White. To breathe, or to survive, under financial constraints and repeated cultural domination seems impossible, or at least only tolerable to pay back, pay forward, family investment.

This is the country’s DNA, where dignity is a luxury, but how many generations will be able to accept the virus? Protesting students have talked about historical debt, registration fees, issues of accommodation, campus security, racism and fees, which for the average student remain extremely high in relation to household income, and has risen with lower government subsidies. Revolution is the underlying message.

There was hope last year. Student protests culminated at the Union Buildings, with diverse South Africans turning out in their thousands under the banner of Fees Must Fall. Change, it felt, could be achieved. It was. President Jacob Zuma announced a zero-percent fee increase. But that was only after a small group of protesters started fires and battled police for hours in the gardens of the country’s highest office. The no-fee increase only slightly reduced the costs for struggling families; it didn’t scrap fees.

The short-term victory at the Union Buildings was diluted, an idealistic hope confronted with a violent reality. There’s violence on black bodies, violence in crime and violence in the streets. How would systemic violence against blacks not lead to more violence? How could this issue avoid the same fate as violent service delivery protests, where promises, police and protests repeat like a song stuck in your head?

Students, being students, know the promise of “radical economic transformation”. They know the ANC’s resolutions. They know how little has been delivered, or, at least, how slow the pace of delivery is.

A handful of student groups have made written submissions to the commission of inquiry on the feasibility of free higher education. A running theme was that this generation needs to achieve free higher education, at least for the poor, now or never. They propose new or increased taxes on the wealthy or budget changes. Clampdowns on wasteful and irregular government spending, as well as corruption, are often cited as sources for potential funding of free education, but reclaiming that cash is easier said than done. At least until the commission’s recommendations come out, the state seems cautious of introducing new taxes or committing to wholesale budget changes to fund free education.

Answers aren’t forthcoming. In the last few days, differences between students have been pointed out. There’s a growing acknowledgement of the “silent majority” who don’t want campuses closed. Nzimande has called on parents to take an active role in combating campus violence. The Democratic Alliance has started an online petition to open universities. Wits will poll its student body on a way forward. A number of organisations have called on students to isolate those causing violence. There appear to be many students who support change but don’t want their studies to be interrupted, or to risk further costs to their families. Black and white students are weighing their potential careers and ability to help their families against the long-term costs and benefits of university closure.

Protesting students appear united in their demand for free education, or at least steps towards it. They want it now. Past protests suggest mass demonstrations will end when most students accept they’ve made a point and need to continue their studies, ready to fight another day, or internal divisions lead to only a small group of protesters continuing. That could change depending on the response of universities, government and police.

Students, however, have held up society’s shackles for all to see. Even if the protests pause, they will resume again in future. Academic programmes and individuals might suffer. That’s the cost of living in an unequal society.

The balance can’t hold. The pain will be spread. The outcome is unknown. DM

Photo: Students from Wits University run as police force fire a stun grenade during the 3rd day of #feemustfall demonstration, against fee increases at universities across the country were announced, in Johannesburg, South Africa, 21 September 2016. EPA/KIM LUDBROOK