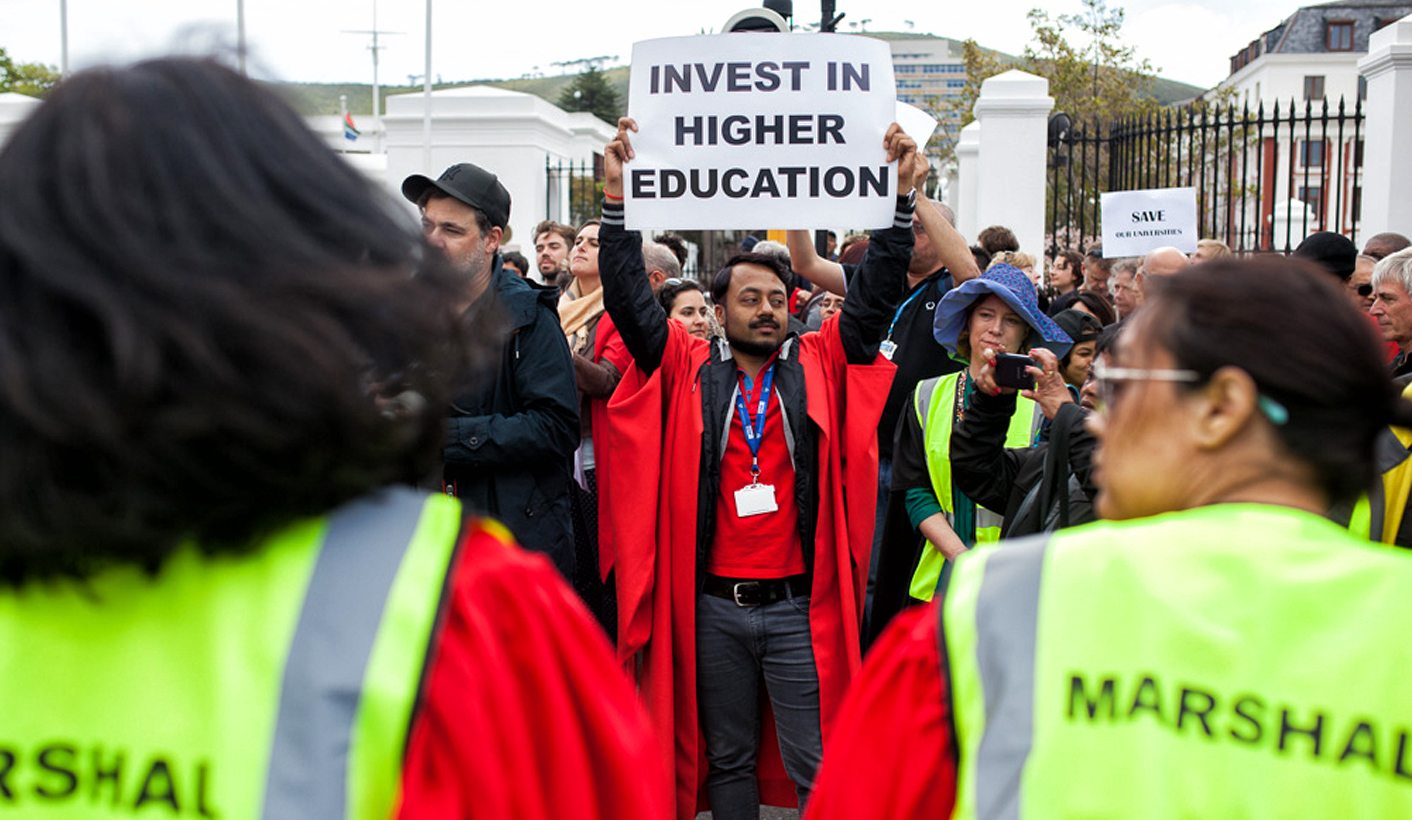 A demonstration at Parliament on Thursday was divided, with some students standing their ground on the fees issue and others protesting against the picket. By Zoe Schaver for GROUNDUP.

A divided group of a few hundred protesters, some picketing against fees for higher education and some protesting against the picket, gathered outside Parliament on Thursday.

The picket was organised by UCT vice-chancellor Max Price to urge Parliament to act on the issue of rising fees. Students as well as faculty from both UCT and Stellenbosch University joined the picket.

“It’s so sad we have to beg our own government for free education, but someone has to do it,” said Tariro Rudenya, a student at Stellenbosch’s Tygerberg campus.

Anna Coussens and Elisa Nemes, PhD programme supervisors at UCT, said they had not attended earlier student protests against fees because they were not sure they would be welcome.

“We no longer can stay silent. We shouldn’t have stayed silent,” Coussens said. “I have been impassioned by this movement. We’re not management — we are intellectuals. We’re also impacted by the cuts.”

“We both have some different interests, but there can be two movements supporting each other,” she said.

Leaders of the UCT Fees Must Fall protest movement spoke out in opposition to the picket, arguing that UCT’s administrators and academic faculty do not share the interests of the students.

A statement read by UCT students explained that UCT’s management brought the original request for an 8% fee increase and that Price is responsible for the suspensions and expulsions of students involved in Fees Must Fall protests.

“We’re here to highlight the hypocrisy of this picket,” said Simon Rakei. “There can be no meaningful alliance between students, workers and academics. The most important thing about this picket is that it is an attempt to divide students.”

Some members of the crowd booed the UCT protesters as they spoke.

Expelled UCT student Alex Hotz was among the group of protesters. Wandile Kasibe, a UCT PhD student, said picketing is useless until students are reinstated.

“You’re ignoring the students who were expelled,” he said.

Lydia Cairncross, a surgeon at Groote Schuur Hospital, spoke to the crowd to say she was among academics present who also did not agree with the picket.

“There are some of us who believe the problem is not only fees but also the undemocratic nature of these institutions, and the overt and covert racism students experience on campus,” she said.

She also called for UCT to reinstate students who have been suspended or expelled.

“Stop brutalising the students who are raising the issues of the day.” DM