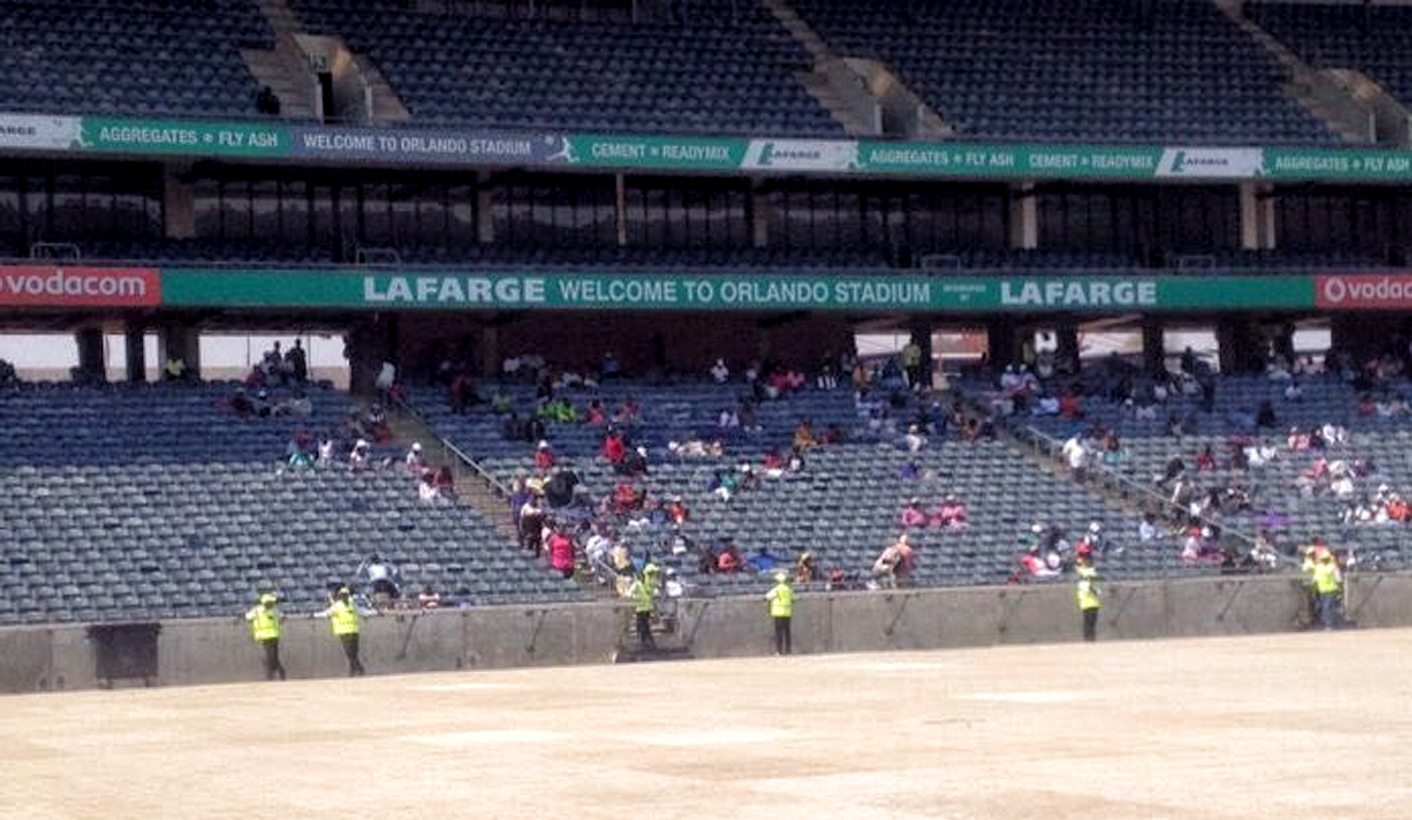 Hlaudi Motsoeneng has been feeling a little under-appreciated of late. So a “thank you” concert was held at Orlando Stadium in Soweto on Saturday. It was the SABC saying thank you to the SABC in a way that only makes sense in the wonderful world of Hlaudi Motsoeneng. Apart from the fact that only a handful of people showed up and the promised line-up of 100 local artists did not materialise, there is still a chance that the concert might make it into the Guinness Book of Records, as it was billed. By BHEKI C. SIMELANE.

The “Thank You SABC” concert sought to thank the SABC for introducing the 90% local content quota and was a show of appreciation to the public broadcaster. The “People’s Poet”, Mzwakhe Mbuli, who couldn’t stop singing SABC COO Hlaudi Motsoeneng’s praises when the announcement of the 90% local content was made, was roped in as one of the organisers of the event. Mbuli promised that the concert would be entered into the Guinness Book of Records, with 100 artists performing between 10:00 and 22:00 on Saturday.

Problems were evident when the show failed to start on time – because the Orlando Stadium was empty. At around 10:00, the time at which the show was scheduled to start, it looked more like a choir rehearsal than a massive music show. The massive stage yawned at the empty stands and the sprinkling of people in the stadium by then sat around in an eternal wait for things to kick off.

The early signs of a public snub of the show were not surprising. The show had drawn harsh criticism from those who are annoyed with Motsoeneng’s impunity and who saw the show as yet another display of his irrepressible showmanship. There were calls on social media to boycott the show, saying it only served to advance Motsoeneng’s personal agenda, not that of the public broadcaster or its audiences.

But Hlaudi, always convinced of his own star power, pressed ahead regardless. The organisers believing that the 40,000-seater stadium would be bursting at the seams and that people would dance the night away.

Motsoeneng’s decision that SABC stations should feature 90% local music was welcomed by many local artists, who also came out in his defence when Motsoeneng faced pressure from the media fraternity, civil society and some political organisations over his controversial editorial decisions.

On Thursday it had emerged that some artists who were billed to perform at the show had not yet received payment. These included, among others, AKA, Kwesta and Jack Parow. Doubts began to emerge about the organisers’ readiness to host the show and meet their target to “fill up the stadium”.

When the show eventually kicked off hours after the scheduled starting time, revellers that sprinkled around the stadium got really excited. Some legends of the South African music industry were to perform – the likes of Abigail Kubeka. Fallen legends like Lucky Dube and Brenda Fassie were honoured. The artists who did make it to the event performed to the best of their ability, despite the shambolic organisation and embarrassing turnout.

Motsoeneng’s ability to survive whatever comes at him has been largely attributed to his close acquaintance with President Jacob Zuma. Communications Minister Faith Muthambi is also known to have his back. She was one of the people who did show up at Saturday’s concert to get her groove on in support of Motsoeneng and the SABC.

Also in attendance was the SABC Board chairman Obert Maguvhe, who at one stage bellowed from the stage: “Are you there?”

The empty stadium did not respond.

The logistics of the event were not properly thought through and communicated. Many people questioned how 100 musicians would be squeezed in to perform in one day. But after queries by Daily Maverick, it became apparent that some artists were not really planning to perform but simply to show up in support.

SABC spokesman Kaizer Kganyago said he could not say much about the show and referred media queries to Mbuli. Kganyago also denied reports that he was present at the event. He was apparently very far from the event, in Thohoyandou in Limpopo.

Mbuli’s phone went unanswered for most of Sunday. A woman who eventually answered his phone told Daily Maverick that the People’s Poet was out.

If Mbuli is hard to find, answers about who paid for the concert are even more difficult to find. The SABC claims not to have paid for it and it is unclear who did. Hopefully, whoever decided that Hlaudi and the SABC needed to be thanked in song and dance, and paid for the “record-breaking” concert, will eventually show themselves. DM

Photo of the empty stands at Orlando Stadium by @sakhilemagalela / Twitter