ICG: Colombia’s Final Steps to the End of War 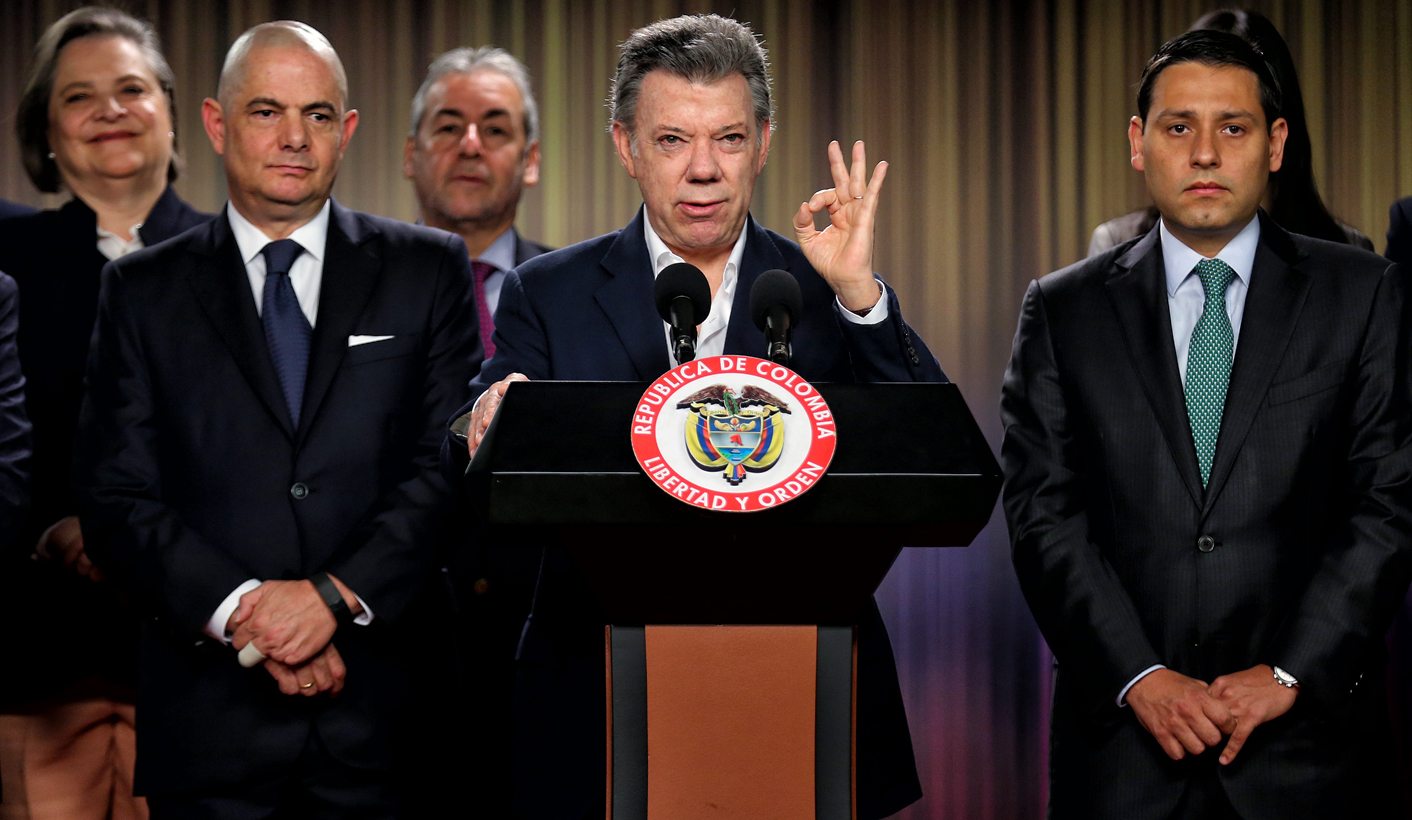 Painstaking negotiations have brought Colombia to the verge of peace with its main insurgency, the Revolutionary Armed Forces of Colombia (FARC). Executive summary and recommendations by INTERNATIONAL CRISIS GROUP.

Over half a century of armed conflict, leaving more than 220,000 dead, displacing six million and imprinting poorer regions and the central state with deep divisions and lingering grudges, appears close to an end. On 23 June, the parties announced a detailed plan to gather FARC fighters in 28 zones to lay down arms.

The insurgency’s 15,000 combatants and militia members are then soon to resume civilian life, while it seeks to convert its radical ideology into a force able to compete in a democratic system. A final peace deal, unveiled on 24 August, resolved the last disputes and brought together earlier agreements to initiate an ambitious scheme of transitional justice; rescue rural Colombia from stark inequalities; further open up the country’s democracy, and begin, with FARC’s help, a programme to replace coca cultivation with licit crops and off-farm economic opportunities.

However, peace faces real perils. The deal finalised in Havana has the blessing of the government and guerrilla leadership but not yet full support from the broader public or the entirety of FARC. The next six to nine months pose major tests which, unless dealt with effectively, threaten to derail the agreement, narrow its impact on guerrilla combatants or fail to prevent the chronic reproduction of violence in the outback.

Trading heavily on the unpopularity of President Juan Manuel Santos’s government, opposition has surged under the influence of ex-President Álvaro Uribe, the principal antagonist of the peace process. If the 2 October plebiscite to approve the peace accords fails, Colombia will most likely suffer political convulsions and a return to war.

Even if the plebiscite succeeds, the relief in government quarters may be brief. The ceasefire and FARC’s laying down arms hinge on how the transition takes shape at the grassroots. In light of the extermination campaign to prevent FARC’s political participation after a ceasefire agreement 32 years ago, the real and perceived security of ex-combatants is fundamental to the success of the early post-conflict period. Local vendettas against guerrillas, unhappiness of some FARC fronts with parts of the agreement and moves by other illegal armed groups to seize former FARC-controlled territory, coca fields and illicit businesses pose acute risks to a delicate transition.

Clear approaches to these and other dangers should help the state and guerrilla leaders steer through the turbulence. A strong communications strategy to educate people about the contents of the peace agreements would help the “yes” vote in the plebiscite. Campaign efforts will have to delink the agreement from the government’s perceived performance and focus on rebutting the opposition’s exaggerated charges that FARC war criminals will not serve jail time. FARC should help by showing goodwill and remorse.

Strict security protocols for protecting FARC combatants, already agreed, should be fine-tuned as the group proceeds to lay down its arms. It is up to the military and other state actors, however, to ensure that the power vacuums left by the insurgency are occupied quickly and conflict-affected communities feel some affinity to a state they have long regarded as distant and brutal. Throughout these multiple challenges, the initial UN Mission will aim to monitor and verify the ceasefire and handover of weapons. Given society’s extreme polarisation, both cause and legacy of the FARC uprising, it must be the neutral arbiter, entrusted with the group’s weapons, watching over the cantonments and investigating and reporting ceasefire violations. Its mandate is narrow, time-limited and difficult.

To fulfil that mandate, the mission will have to handle carefully the expectations of communities and maintain dialogue with them to acquire crucial details on any possible violations. It will have to navigate the dynamics of other illegal armed groups still active in the countryside and accurately assess all violations. When disputes between FARC and the government occur, it could find itself on fragile ground. Informally consulting with Norwegian and Cuban delegates to the peace talks could be useful, while the international community will occasionally need to voice support for the mission’s ongoing role.

Colombia has been in tougher times in over 50 years of conflict. Its response to these hurdles will decide if the war ends or continues into the next generation.

To achieve approval of the peace agreement in a legitimate plebiscite:

1.Implement a clear communications strategy to educate citizens on the peace deal that emphasises peace dividends for victims and conflict-affected communities, especially how justice will be applied, while being sensitive to differing urban and rural concerns.

2.Co-ordinate with but respect the independence of political parties and civil society campaigns for peace and guarantee rights and assure a level playing field to opponents of the agreement, including in civil society.

3.Apologise publicly for the state’s role in certain events in the war, including the extermination of the Patriotic Union (UP) party, abandonment of rural communities and/or abuses by security forces.

4.Carry out goodwill gestures such as partial concentration of forces, symbolic destruction of unstable weapons and/or the release of all children under the age of 15 in its ranks, to show benefits of peace before the plebiscite vote.

5.Apologise publicly for specific and/or systematic abuses such as extortion and kidnapping, and co-operate with the International Committee for the Red Cross in the Commission to Search for Disappeared Persons.

6.Publicly announce and abstain from coercing local populations to vote or vote a certain way in the plebiscite.

To assure an effective transition from war to post-conflict:

To the government and FARC:

7.Carry out activities to promote reconciliation between conflict-affected sectors, FARC and the state, including short-term projects that can be done with community participation while the guerrillas lay down their weapons. Define long-term reincorporation activities to be carried out in the cantonment sites, individual and collective in nature, and tailored to gender, age, and ethnic differences.

To the tripartite mechanism:

8.Establish and sustain dialogue with local communities in and near the cantonments on their concerns, and purchase supplies as much as possible from local providers while doing no harm to local economies.

9.Establish quickly a space in which security incidents against FARC members who travel outside the cantonments can be reviewed, and change security protocols when necessary.

10.Select, before the ceasefire finishes, the members who will assume official roles in implementing the peace agreements, taking account to the greatest extent possible their transitional justice obligations.

To the armed forces:

11.Carry out activities to create the groundwork for reconciliation with conflict-affected communities that mistrust military and police forces and simultaneously time movements into territories adequately to minimise the risk of illegal armed groups taking over.

To the UN mission:

13.Establish and lead regular meetings between actors working on the ground in areas close to cantonments to exchange pertinent information and consult, when necessary, with the delegates from guarantor nations when making decisions in the high-level dispute resolution process.

14.Begin planning for the three-year expanded mission while FARC lays down its weapons and the ceasefire is being implemented, monitored and verified.

To the international community, in particular the US and European Union:

15.Give the UN mission urgent political support as and when crises arise and the mission and tripartite mechanism the technical support they request.

16.Give sustained support to finance community projects in post-conflict areas, especially in and around zones where FARC will lay down its weapons, and back the post-conflict ministry’s Rapid Response Strategy.

17. Explore the means to support FARC reincorporation activities financially after the group finishes laying down its weapons.

To the international community, in particular Latin American governments:

18.Maintain support for the peace process, independently of other issues that cause regional tensions. DM

Photo: Colombian President Juan Manuel Santos (C) speaks at the Palacio de Narino in Bogota, Colombia, 30 August 2016, after he signed the convening for the plebiscite to endorse the peace agreement signed with the FARC a week before, in Cuba. EPA/LEONARDO MUNOZ