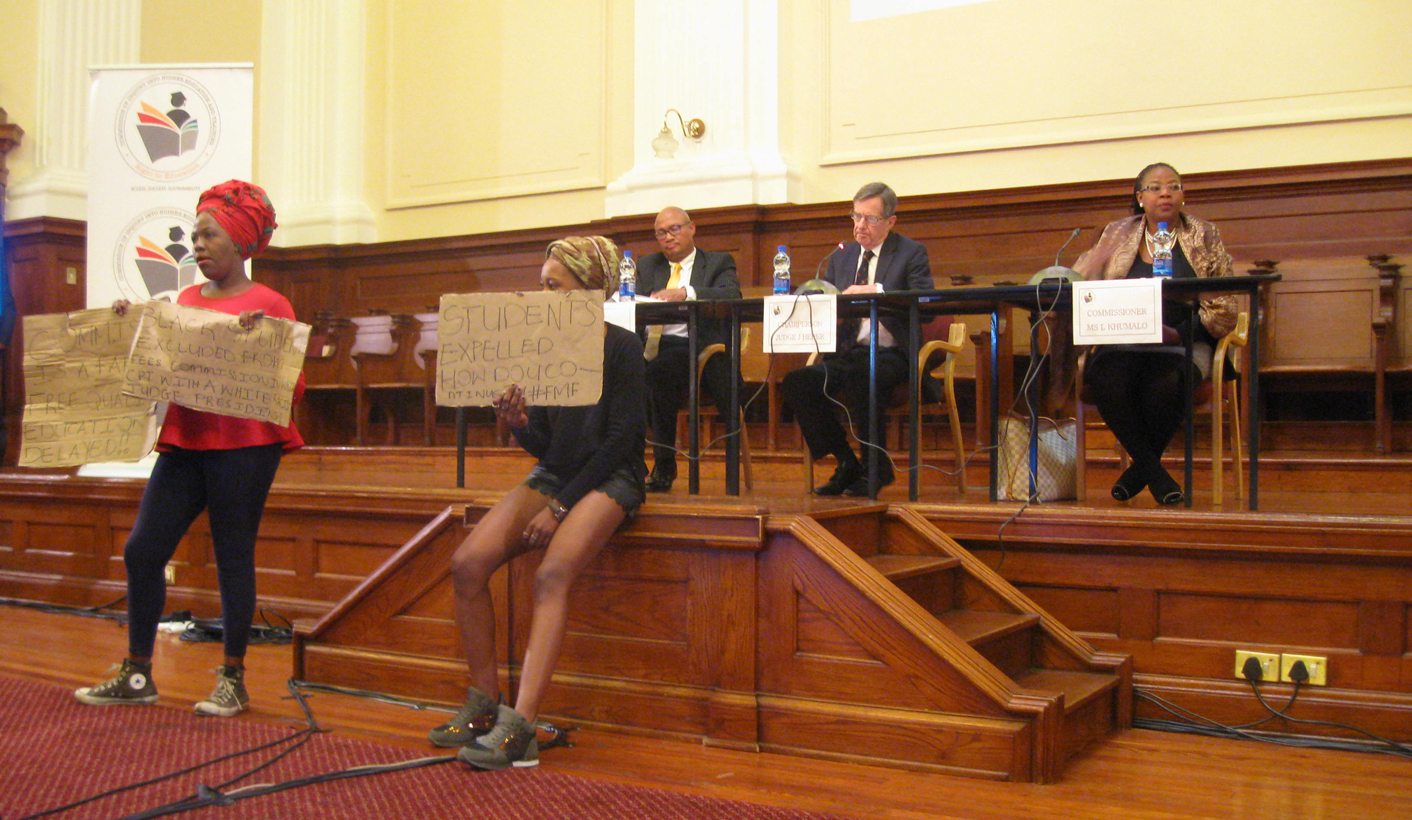 Students protested on both days of the Fees Commission hearing in Cape Town, during which UCT’s Max Price was escorted away by police. By Zoe Schaver and David Doochin for GROUNDUP.

UCT,  UWC, Equal Education,  the National Research Foundation,  student protesters and others presented their views at the Commission of Inquiry Into Higher Education and Training  (Fees Commission) in Cape Town on 5 and 6 September.

A clash between police and student protesters brought an early end to the hearings of the  Fees Commission  on Tuesday as students occupied the Centre for the Book to hold a meeting of their own.

After a presentation by UCT Vice Chancellor Max Price, students entered the building at about 11:30am  to demand that student activists who had been suspended or expelled for their participation in fee protest actions be reinstated. Price’s laptop was taken from him by the protesting students but returned after about 10 minutes.

About 20 officers from the South African Police Service escorted Price out and attempted to form a barrier to prevent more students from entering the building. Police pushed towards students with plastic shields and yelled for them to back away, breaking a metal railing off of a swinging door and nearly toppling a metal detector in the process.

What UCT said to the commission

In his testimony before the commission, Price argued for a sliding scale that made higher education free for students with a family income of less than R120,000 per annum, and provided loans to students in other family income brackets of  up to about R600,000 per annum.  Repayment of the loans would be based on income of the students after their studies are completed.

“You don’t have only the rich and the poor — it’s a continuum. If you have a differentiated fee system, to deal with that you need to have multiple fees. The administration of that is very complex,” he said.

“We believe fees and finances should never be an obstacle for talented students,” he said.

What Equal Education said to the commission

Ntuthuzo Ndzomo, deputy general secretary for Equal Education, also argued for a sliding scale for student fees based on students’ backgrounds and family income. He said whether students received loans or grants should be determined by their ability to pay money back.

“I am the only one from my own home who actually went to university,” he said. “My income is not my own income — it’s my family’s income. Circumstances are quite important, and we cannot run away from them.”

“There’s a common link between the challenges students face in elementary and primary school and the challenges they face in university,” said Andile Cele, parliamentary officer for Equal Education.

“The poorest students in universities and those we see protesting come from the rural areas and the townships, where the working class is. They come into these schools and they still face the same challenges they faced in basic education where the roof was collapsing, where there were not enough teachers in the school.”

She said students who lacked resources in basic education were kept from succeeding in higher education, resulting in poor representation of black people in university faculty and research departments.

“Even within the black population, the middle class doesn’t necessarily know the struggle of the people in the townships.”

What the student protesters said to the commission

After Price had made his presentation, leaders of the student movement occupied the chairs of the commissioners, behind which they hung a banner that read “Black Solidarity Action”. More than a hundred students gathered to discuss their demands, and members of the crowd were invited to share their opinions.

UCT student Masixole Mlandu, who is currently interdicted from entering the university campus, said the struggle was not just about fees but about “black people’s liberation”.

Mlandu said the commission should also address issues of sexual assault on campuses and in the larger community, the Eurocentrism of the education system and outsourcing of work in South Africa resulting in unemployment, he said.

“It’s high time we have this conversation with students at the centre of the conversation,” he said.

Lewis called for an end to outsourcing, a living wage for workers, a national commission based on justice for students and workers, the “demilitarisation” of campus police, investigations into corruption, the socialisation of land and mineral resources and a “revolutionary” curriculum for secondary and primary school students.

“The onus lies with us to reimagine the society we wish for as black people,” she said.

What WIVL  said to the commission

Mohamed said capitalists were willing to pay large taxes to perpetuate apartheid, and if taxation rates returned to apartheid-era levels, the government would have plenty of revenue. “There is plenty of money for free healthcare, for free housing, for all our basic needs.”

Following the discussion, protesters disbanded at around 14:00, but the commissioners did not return and the meeting did not continue.

What UWC said to the commission

Yesterday, representatives from the University of the Western Cape (UWC)  said state contributions were critically important to the university because of its financial vulnerabilities and the high proportion of students dependent on the National Student Financial Aid Scheme (NSFAS).

Lawack explained that UWC students sign an agreement when they register for classes that details what they are able to pay on a monthly basis and that the university urges students to settle their debts to the university by the time they graduate.

However, students’ ability to pay by graduation has declined in recent years, she said. And with about 40%  of students dependent on NSFAS, the university’s financial situation is delicate.

“Without state support, we would only be able to survive less than two months,” Lawack said.

What the National Research Foundation said to the commission

Molapo Qhobela, CEO of the National Research Foundation, said South Africa did not prioritise education in its budget to the extent that it should.

“The vitality and health and well being of nations is dependent on how developed their education system is,” he said.

What Graduate Women International said to the commission

Siwe Coka of Graduate Women International argued that students themselves should make a commitment to their education.

“The student should be at the centre of this whole package. Is the student willing to accept responsibility for the investment that is being afforded?” she said.

“I never even had shoes, but I made sure that I crafted a way for myself. Someone gave me an opportunity.” DM

Main photo: Students protested on both days of the Fees Commission hearing in Cape Town. Here two students sit in front of the commissioners.