TRAINSPOTTER: Mosebenzi Zwane, a man who tried to rob a whole country 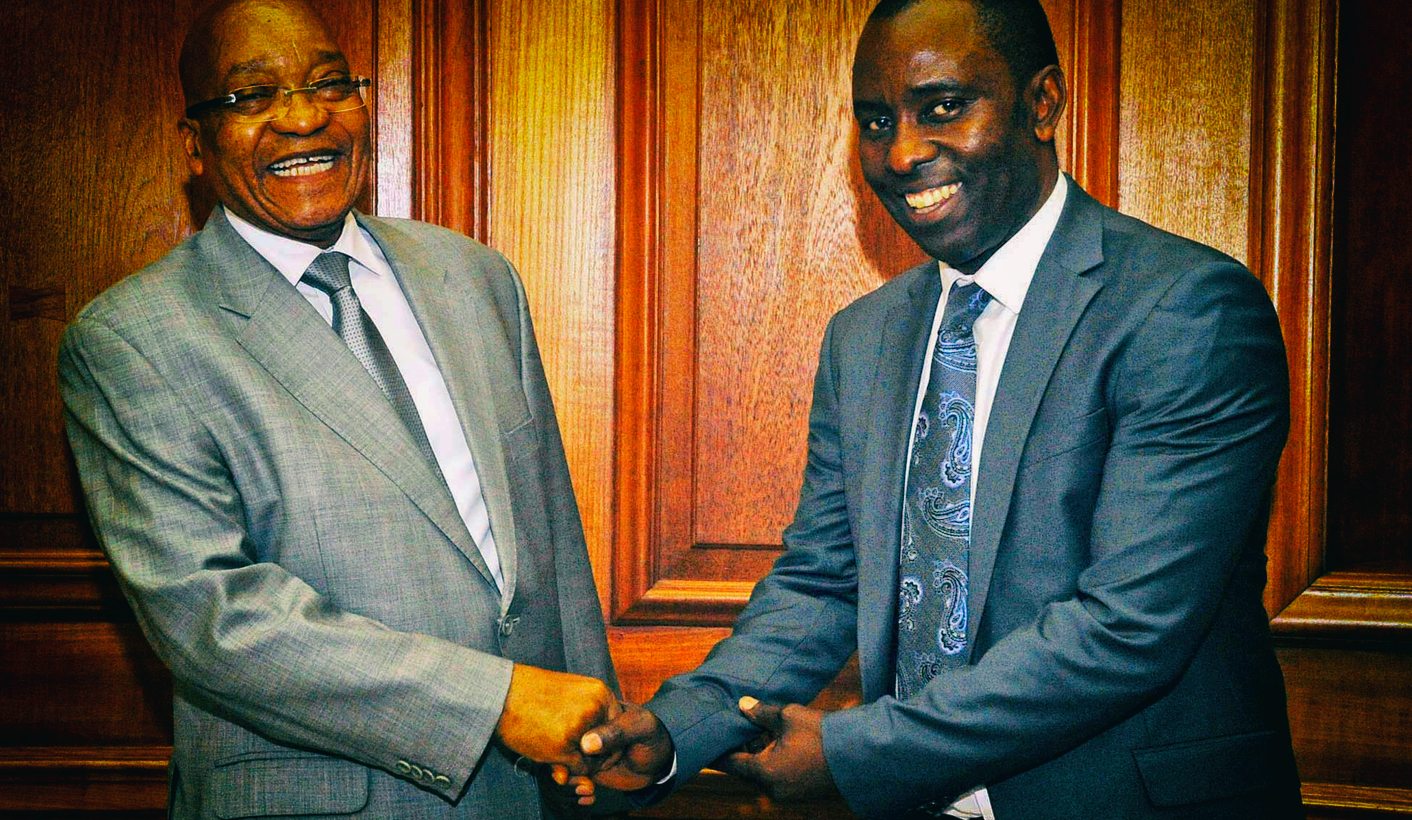 Just when you thought the Home of the Noiseless Condom couldn’t get any dumber, along comes Mosebenzi Zwane, and the statement that wasn’t a statement. But that was totally a statement. By RICHARD POPLAK.

Welcome, weary traveller, to a country that fully deserves its looming junk status.

This is Willy Wonka’s Chocolate Factory, but instead of LSD-laced lollipops and talking bonbons, South Africa produces acid-trip-grade political dysfunction on an industrial scale. Every local is gifted with a golden ticket. And no one appears to be enjoying the ride.

Actually, that’s not entirely true. Willy Wonka—in this case, President Jacob Zuma—is having a blast. And so is the cabal that backs the increasingly convoluted state capture machinations that he nominally heads up. They’ve told so many lies, put so many moves in play, devised so many counter-counter-strategies, and made so many weird-ass chocolate bars, that not even they know what’s going on anymore.

The latest contretemps was delivered courtesy of Mineral Resources Minister Mosebenzi Zwane, who, even by the high standards of the current cabinet, gives anyone who encounters him the howling fantods. He’s the typical ANC-type ministerial material, with an opulent home that was allegedly purchased under illegal circumstances, the sort of folly that is surrounded by the grinding poverty his party has had 22 years to eliminate. The locals call him “The King of Warden,” a reference to the miserable Free State hamlet over which he ‘lorded’.

What is wrong with Zwane? It’s difficult to answer that with any accuracy, because he’s too busy robbing the country to run his portfolio. Take Friday’s lunacy by way of example: Zwane issued a statement so absurd, so meretricious, so utterly off piste, that it instantly joined the pantheon of Zuma-era gaslighting. It was titled “STATEMENT OF THE CHAIRPERSON OF THE INTER-MINISTERIAL COMMITTEE SET UP BY CABINET TO CONSIDER THE IMPLICATIONS OF THE DECISIONS OF CERTAIN BANKS AND AUDIT FIRMS TO CLOSE THE ACCOUNTS OF AND/OR WITHDRAW AUDITING SERVICES FROM OAKBAY INVESTMENTS” [caps are theirs].

Zwane kicked off the proceedings by informing us that in April of this year, Cabinet established an IMC in order to “consider allegations that certain banks and other financial institutions acted unilaterally and allegedly in collusion, when they closed bank accounts and/or terminated contractual relationships with Oakbay Investments [owned by the Gupta family]. The IMC was chaired by myself as the Minister of Mineral Resources.” The government, which up to now had been entirely sanguine real unemployment running at 40 percent, was suddenly concerned about the potential of 7,500 job losses at unfairly maligned Oakbay.

This was serious stuff.

So serious, in fact, that Cabinet was resolved, “to recommend to the President that given the nature of the allegations and the responses received, that the President consider establishing a Judicial Enquiry in terms of section 84(2)(f) of the Constitution.”

Wait, what the fuck—the entire cabinet was now going after the banks for going after the Guptas? As it happens, that was the good part of the statement. The rest of it read like a parody of a declaration from Mobuto Sese Seko’s Zaire, replete with little gems like this one: “[Cabinet resolves to] to re-consider South Africa’s clearing bank provisions to allow for new banking licences to be issued and insodoing, to create a free market economy.”

Or this one: “[Cabinet is now moving toward] the establishment of a State Bank of South Africa with the possible corporatisation of the Post Bank being considered as an option.”

The banks, the markets, the rand—everything went for an instant ball of shit. (The statement made an ominous reference to the fact that although Finance Minister Pravin Gordhan was appointed to the IMC, he never showed up to any meetings.) There was, however, something bigger at play here:  Zwane’s has been going on and on about how the banks have to be brought to heel, and how the South African Reserve Bank should cede the control of licensing banks to—guess who?—the finance minister. Which would basically wipe away every last element of internationally accepted financial governance best practices, and hand the banking sector over to whoever holds the keys to the Treasury, a fact that didn’t seem to present a problem for Zwane.

Can you picture Des Van Rooyen in his PEP military fatigues managing the banks in Africa’s biggest economy? Me neither.

But there’s something I forgot to mention in all of this: Zwane belongs to the Guptas. He was a surprise appointment after Zuma suddenly moved his predecessor, Ngoako Ramatlhodi, to the public service ministry in May last year, and one of his first moves was to escort a delegation from Gupta-owned Tegeta Exploration & Resources to Switzerland, where they travelled to negotiate the purchase of Glencore’s Optimum colliery. Door to door service with a smile.

Suddenly it all came together.

By which I mean everything started falling apart. Did Cabinet really back these attempts at hijacking the banking sector? The episode reached its apex when Radio 702’s Xolani Gwala, sounding completely baffled, spoke with Mineral Resources spokesperson, Martin Madlala, who sounded totally stoned. Madlala’s slurred, hesitant responses beautifully articulated the general level of inanity permeating this government. Between what I assume were enormous bong hits, Madlala tried to bear up the bullshit.

“………It is the IMC’s resolution as presented to cabinet,” said Madlala.

Which nudged us slightly closer to the truth. Later on Friday, the presidency issued a statement with the following boldface header: “STATEMENT OF MINISTER OF MINERAL RESOURCES IS NOT GOVERNMENT POSITION.”

It can’t get any dumber than this, can it? One of the pernicious untruths about all of the instability since the firing of Nhlanhla Nene last year is that these shenanigans affect only rich whites, and that the poor black masses with nothing to lose have, well, nothing to lose. But nope. The people who will suffer most—who are suffering most—are the poor. And life is going to get much, much worse for them if this country comes in for a ratings agency downgrade. It’s a shitty system, but right now it’s the system. And to screw with it means to screw with the country’s most vulnerable citizens in a way that no God—not even the ANC’s vastly amenable Jesus—will ever forgive.

But how is it even possible to rob a whole country? South Africa has, of course, for the past 400 years been little more than a place to pillage. Now, though, we find in the grip of something else, something awesome in contours, an almost spiritual encounter with the dissolution our history has wrought. Four centuries of crimes both large and small have rendered us a place in which sex is fair exchange for municipal services, and in which the mining minister, who has clear ties to a business clan, is actively trying to undermine the banking system. Meanwhile, the dude who runs the country does not care about the country, because it is not yet a country—he knows it to be a partially built structure, shaky on its foundations, jerry rigged from bit parts. A township shack that is easily bulldozed into oblivion.

And so he walks in the front door in broad daylight and takes what he needs, giggling his way through our limp protestations.

At times, it feels like Zuma is not real, like he’s been scripted into being—an actor playing a role. If so, he is one of a number of men in this new global monodrama of concentrated wealth and power: a Putin, an Erdogan, a Trump. And he needs loyal lapdogs like Mosebenzi Zwane to keep pushing, prodding, needling, shoving, undermining—until the whole thing tumbles down, and he has clear access to what he wants.

Our very own Willy Wonka, producing his multi-coloured midget-produced acid-enhanced political thuggery. It’s a strange thing for all our futures—all our crazily disparate futures—to be bound up with this financial suicide pact, these not-so-random acts of ultra-grand larceny. Things surely cannot get any dumber. But dumber they will get. Until we get the downgrade we deserve, and the Chocolate Factory turns nasty in ways none of us can yet anticipate. DM