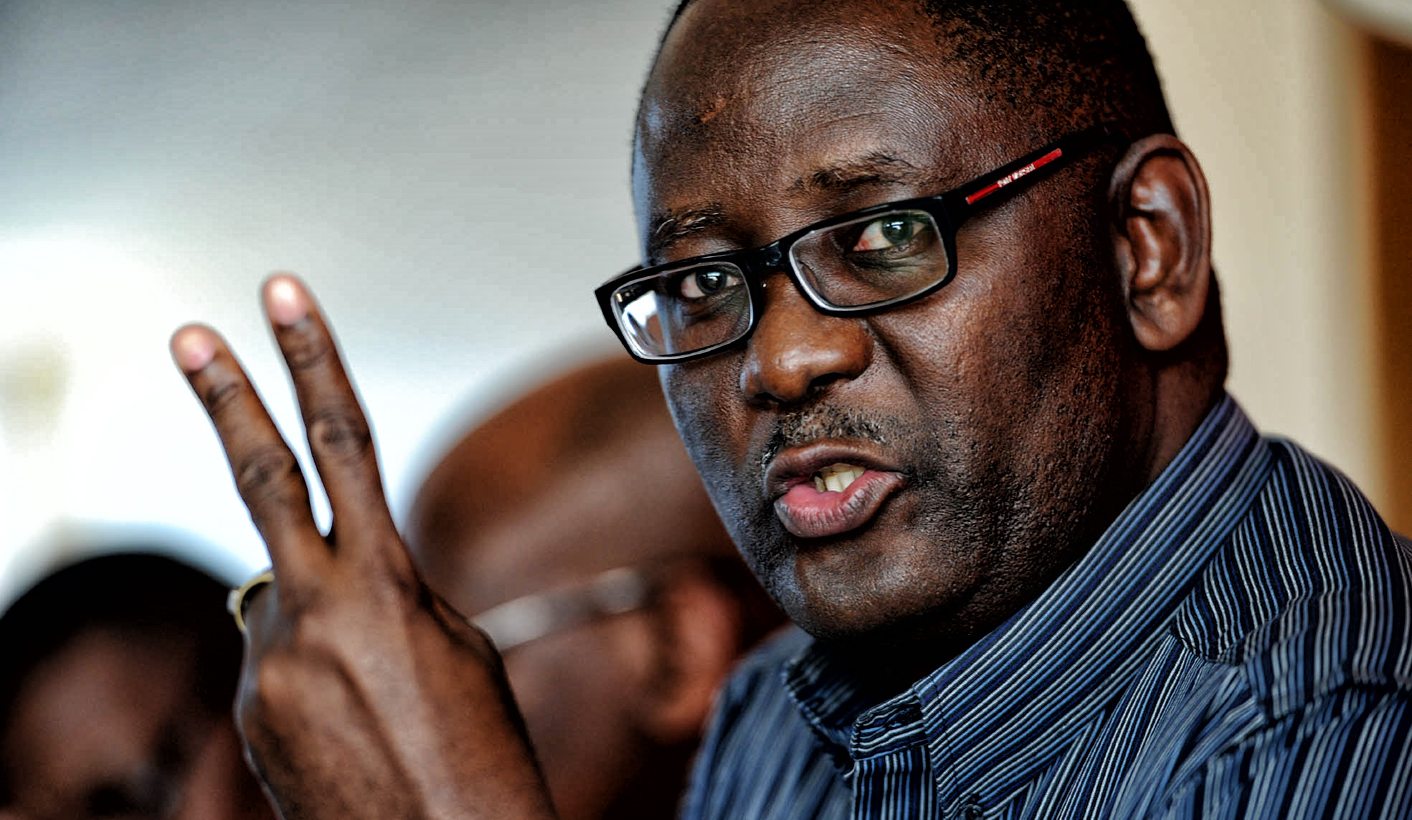 The constitution has been written; the name and logo will come soon. Within weeks, Zwelinzima Vavi and his cohort of non-Cosatu-aligned unions are expected to launch their new federation. What makes it distinctive, they say, is that their only political alignment will be to the working class. By GREG NICOLSON.

Former Cosatu General Secretary Zwelinzima Vavi on Thursday said plans to establish a new trade union federation are well under way and its first campaigns will focus on organising workers in the formal and informal sectors and fighting job losses. Vavi, who was speaking as the convenor of the steering committee to form a new federation, said unions are discussing a draft constitution, a name and logo, and will meet within three weeks to choose a launch date.

While 57 unions have expressed interest in joining the new federation, 31 unions were represented in a meeting on Tuesday to discuss the way forward. Said Vavi, reading from the steering committee statement:

“One thing on which we can all agree is that a strong, militant workers’ organisation is more necessary now than ever, given the fateful combination of the employers’ offensive, the mushrooming of casualisation, the burgeoning army of vulnerable, marginalised, often isolated workers, and in particular unorganised workers who make up a staggering 76% of the labour force.”

“One thing has become even clearer: Cosatu cannot unite workers following its purging of hundreds of thousands of its members for political reasons,” he added.

“There will be no realisation of the dream of ‘one country one federation’ by unions that insist on sleeping with worker’s class enemies.”

Vavi, whose dismissal from Cosatu, along with the expulsion of the country’s largest union, the National Union of Metalworkers SA (Numsa), directly led to discussions on forming a new federation, was talking about Cosatu and the ANC’s acquiescence to capitalist policies:

“In carefully thinking through how other federations and many unions have degenerated and became paralysed, fragmented, intolerant and ineffective, we have attempted to build in measures to the constitution that pay more than lip service to crucial principles and that will instead offer a vibrant, inclusive and tolerant space for workers to discuss the challenges they face. We hereby pledge that workers will not be expelled for holding different views to the leadership or the majority of other workers.”

He said the new federation’s constitution would be a “living document” ensuring the gap between union leaders and members is reduced, while unions push for accountability and democracy.

The unions have agreed the federation should be politically independent and would refuse “cosy deals” with employers, including government. It will, however, take political positions aligned to the working class. “This is what makes us distinctive,” said Vavi.

The new federation remains open to other unions and members who want to join and Vavi said its attempts to unionise informal sector workers such as recyclers and home workers would be a crucial step forward for the labour movement.

“We are breaking new ground, and increasing numbers of workers, even from within existing unions outside of the steering committee are reaching out to us because they recognise that we are not fatally compromised or at the mercy of those seeking a well-paid career. We know which side we are on, and intend to ensure that the entire working class is beside us.”

Vavi also fired a shot at the Hawks for the targeting of Finance Minister Pravin Gordhan. He said it amounted to President Jacob Zuma launching “a second attempt to stage a coup in the Treasury”, the first being when Nhanhla Nene was replaced last year. The Gupta family, he said, wants to run the Treasury to appoint their own “sycophants in the state enterprises and critical departments”.

Thursday’s press conference followed a decision by the Food and Allied Workers Union (Fawu) last week to leave Cosatu. Fawu, which made the decision at a national congress, has had an acrimonious relationship with the Cosatu leadership since the expulsion of Numsa and dismissal of Vavi and challenged the federation to reverse the moves in two congresses last year. “The decision taken is irreversible. It will be undergoing implementation as of now,” said General Secretary Katishi Masemola last week.

Cosatu claimed Fawu’s decision came after divided leaders “split an already weakened union for their narrow political reasons”, which Fawu’s leadership has denied. Cosatu said it would continue to engage members who did not support the split and that it wanted to recoup R5-million Fawu owes in affiliation fees. The union has 13,000 members across the country.

“They must go and jump and they will not get a single cent. They must go and deal with crisis that they dismissed hundreds of thousands of workers because they didn’t agree with their political stance,” said Vavi on the fees Fawu owes Cosatu. Some of the money owed was due to the union’s decision to stop paying political levies, said Raymond Mnguni, Fawu deputy president.

In his address to the Fawu congress, Vavi was scathing in his comments on Cosatu.

“Fawu can’t go back to Cosatu because there is no Cosatu to go back to. They have killed the federation of Elijah Barayi, Jay Naidoo, Liz Abrahams, Oscar Mpetha, and Ray Alexander. What exists now is the Federation of Sidumo Dlamini, Michael Makwayiba, Lieutenant-General Zizamele Cebekhulu and Mugwena Maluleke. There is one thing they all have in common. There were not there when Cosatu was formed. They have nothing to show in terms of their own involvement in a struggle against apartheid and its bosses.”

Cosatu leaders have mocked the attempt to begin a new federation. At a central executive committee meeting last week it announced plans to demonstrate against labour brokers, e-tolls and retrenchments while demanding the introduction of a national minimum wage.

On the ANC’s decline in support at the local government elections, the CEC said, “The ANC needs to rescue its government from the stranglehold of national Treasury and the iniquitous ratings agencies by implementing its progressive policies and resolutions adopted in Polokwane and Mangaung respectively.” It added, “The ANC cannot continue to allow the pillaging of the state resources through the tender system and also tolerate the wasteful expenditure of government and inefficiencies of state-owned entities.”

Both Cosatu and Vavi’s new federation state similar goals. The success of the new federation will be determined by whether its political independence means it can do more for workers than Cosatu, and whether it is able to follow talk with meaningful action. DM