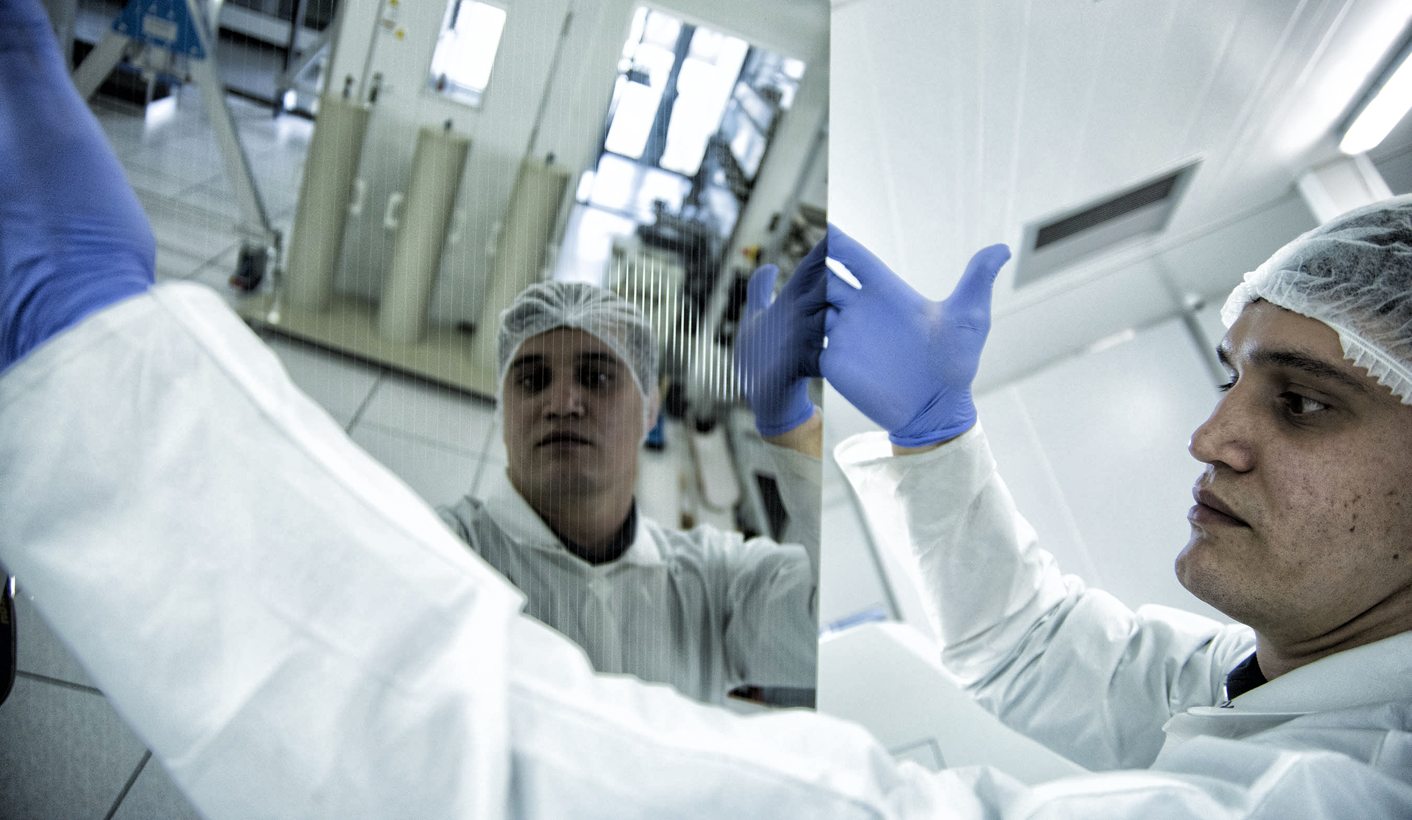 Professor Vivian Alberts is sitting in a small office above a hi-tech solar factory set among rolling vineyards in sunny Stellenbosch, South Africa. “We want to offer to the government and people of South Africa a completely optimised South African photovoltaic system built by South Africans for the South African market,” he says, beaming. He sees the country as an emerging solar super power, and he’s had a role in building it. By JEFFREY BARBEE.

When South Africa was emerging from apartheid in 1993, Professor Vivian Alberts and his students were busy developing traditional silicon photovoltaic solar systems in his lab at the University of Johannesburg. Expensive silicon is the classic way that the sun’s energy has been harvested for electrical power since 1954, but today Alberts is trying something different, helping create the continent’s energy future using a proprietary glass coating called thin film, and there is no silicon here.

His big new discovery for a thin film coating for glass was announced in 2007. Although the race for something to replace traditional silicon has many players, not only is Albert’s factory the only one in South Africa, it is the only full manufacturing plant for photovoltaic modules on the whole continent.

When solar power becomes cheaper than traditional sources of energy, this is called grid parity. To have grid parity, solar must be as cheap or cheaper than coal, oil, nuclear or gas per kilowatt generated. Thin film, because it has lower manufacturing costs at scale, has traditionally been thought to offer this, because traditional silicon-based solar modules are more expensive.

Photo: Dr Alberts holds one of the panels that has just come off the new fabrication line. Dr Vivian Alberts and his team have created the first wholly African-designed and -built solar panels at their facility in Stellenbosch South Africa. (Jeffrey Barbee/Alliance Earth.org)

Timothy Silverman, from the Colorado-based National Renewable Energy Laboratory, recently published a study through the International Energy Agency into thin film. He confirms  “Thin-film solar cells use less semiconductor material because they are dozens of times thinner than silicon solar cells. The semiconductor material is one of the highest-cost components of the module, so this used to give a cost advantage to thin-film modules.”

He says costs are coming down for silicon as well, but it’s a technological race and one that will have consumers winning no matter which technology is triumphant.

A 2016 article in the industry magazine PV states that grid parity with solar may have been reached already in as many as 20 US states. This is also great news for developers like Alberts, who need to create investment excitement in order to scale up manufacturing processes.

Today he is managing director of PTiP (Photovoltaic Technology Intellectual Property) Innovations. Originally made using imported glass from Germany, the latest panels are made with 100% South African materials and already rolling off the new assembly line in Stellenbosch. Dubbed by some as the Silicon Valley of South Africa, this traditional wine-making area now hosts a growing number of technology startup companies focusing on innovations in energy, technology, internet and telecommunications.

The Department of Science and Technology funded Albert’s early breakthrough research but today PTiP is majority owned by the South African government’s Industrial Development Corporation who have been touting PTiP’s bright ideas around the industry.

In Cape Town, international companies such as Sunpower, AEG and China-owned Jinko Solar assemble panels from parts made all over the world, but Alberts uses no silicon crystals and PTIP does everything in-house. “In this facility you start with the raw material in the morning and then this afternoon you see a final product under one roof.”

When news of the new thin-film solar technology hit the media in 2007, big German companies came knocking. After the initial excitement, it’s been a bit of a rocky road since. The patents were licensed to Johanna Solar Technologies which built a production plant near Berlin before being acquired by Bosch in 2009. Bosch then launched proceedings under European patent law to take the whole patent licence away from Alberts. After a dispute lasting more than two years, Bosch lost the case at the end of 2015 and the patents are back in South African hands.

Alberts’ thin film invention is not the only South African technology that is overturning traditional notions that innovation flows south, from the developed world to the developing world. Mike Mulcahy is the CEO of Green Cape, a not-for-profit agency set up by the Western Cape and the South African government to support development of the green economy. They assist local and international businesses and investors to create green technology developments and services. When international solar company Soitec built a solar plant in Touws Rivier they chose to use a South African-designed tracking system that increases solar panel efficiency by following the sun across the sky. The tracking system was so good, says Mulcahy, that the company licensed the rights to it to their European partner.

Photo: Luando Mkosi works on the system that deposits the patented surface that generates electricity onto the glass panels. (Jeffrey Barbee/Alliance Earth.org)

South Africa is among the fastest growing renewable energy markets, placing first in Africa and fourth in the world, according to Climate Scope. International legal firm Baker & McKenzie count 6,000 Megawatts of renewable energy already built in the country, with more to follow under the third round of the government’s procurement plan. Mulcahy is helping to oversee this burgeoning industrial investment and Alberts’ PTiP is part of that growth. “PTiP represents South African innovation in the solar market,” he explains.

Investments into renewables are flooding in, offering a ray of hope for this country with 26% unemployment; 79 renewable energy projects are under way.

“South Africa is experiencing a boom in cost-competitive solar power,” says Mulcahy, “at least 12 industrial facilities for manufacturing and/or assembly have been set up nationally. Eight of these are located in the Western Cape, likely because the province offers a strong, enabling environment for such investment.”

The Western Cape government provides cash incentives for green energy companies through their Manufacturing Competitiveness Enhancement Programme, which can grant up to $3.2-million to companies that have set up in the province.

The government wants 8.4 gigawatts of power to come from solar by 2030. Since their Renewable Energy Independent Power Producer Programme (REIPPP) started in 2011 there is now 1GW already connected, with projects in place to supply 2.2 GW more. A recent study by the government’s Center for Scientific and Industrial Research (CSIR) has shown that the renewable energy rollout in South Africa has saved the country approximately R4.8-billion between January 2014 to June 2015 by avoiding constant blackouts and reducing the amount of coal and diesel the country burned for power generation.

Innovations in renewables and the bid programme set up by the government is driving down the costs of renewables further, says Green Cape’s Mulcahy. “The competitive bidding process has seen prices for solar drop over 75% in under 5 years in South Africa.”

The latest tariff for solar paid to new developers in South Africa under the government’s REIPPP is 79 South African cents per Kilowatt hour. Compared to Medupi, the new coal-fired power station being built here, the cost per kwh for its dirty coal power is almost double at 128 cents. That project is already over budget and three years late. Since coal is the next cheapest form of electrical power, the country’s renewables programme is now delivering electricity much cheaper than new coal, gas or nuclear.

As for Alberts, he is planning for construction to begin on a shiny new industrial-scale plant to supply his thin film solar panels to the country’s rapidly growing alternative energy market. “Once we get that final plant running and churning out millions of modules that are going into local communities, then we will be very proud.” DM

Main photo: A technician holds one of the panels before it comes off of the new fabrication line. Dr Vivian Alberts and his team have created the first wholly African designed and built solar panels at their facility in Stellenbosch. (Jeffrey Barbee/Alliance Earth.org)

Allianceearth.org paid for the travel and accommodation for the journalist.

Jeffrey Barbee is the director and founder of AllianceEarth.org, an independent not-for-profit environmental and scientific reporting initiative which funds investigative stories for the world’s media. He is an award-winning writer, photographer and filmmaker whose energy documentary The High Cost of Cheap Gas won the Envirofilm Film Festival in Europe, The LA Independent Film Fest, and The International Accolade awards. He is a content creator and correspondent in film writing and production covering science and the environment for LinkTV, PBS, KCET, Deutche Welle, Al Gore’s Climate Reality, Reuters, and the UK Guardian. On Twitter: @jeffreybarbee and @allianceearth