Zuma takes charge of state-owned entities – but where does this leave Ramaphosa? 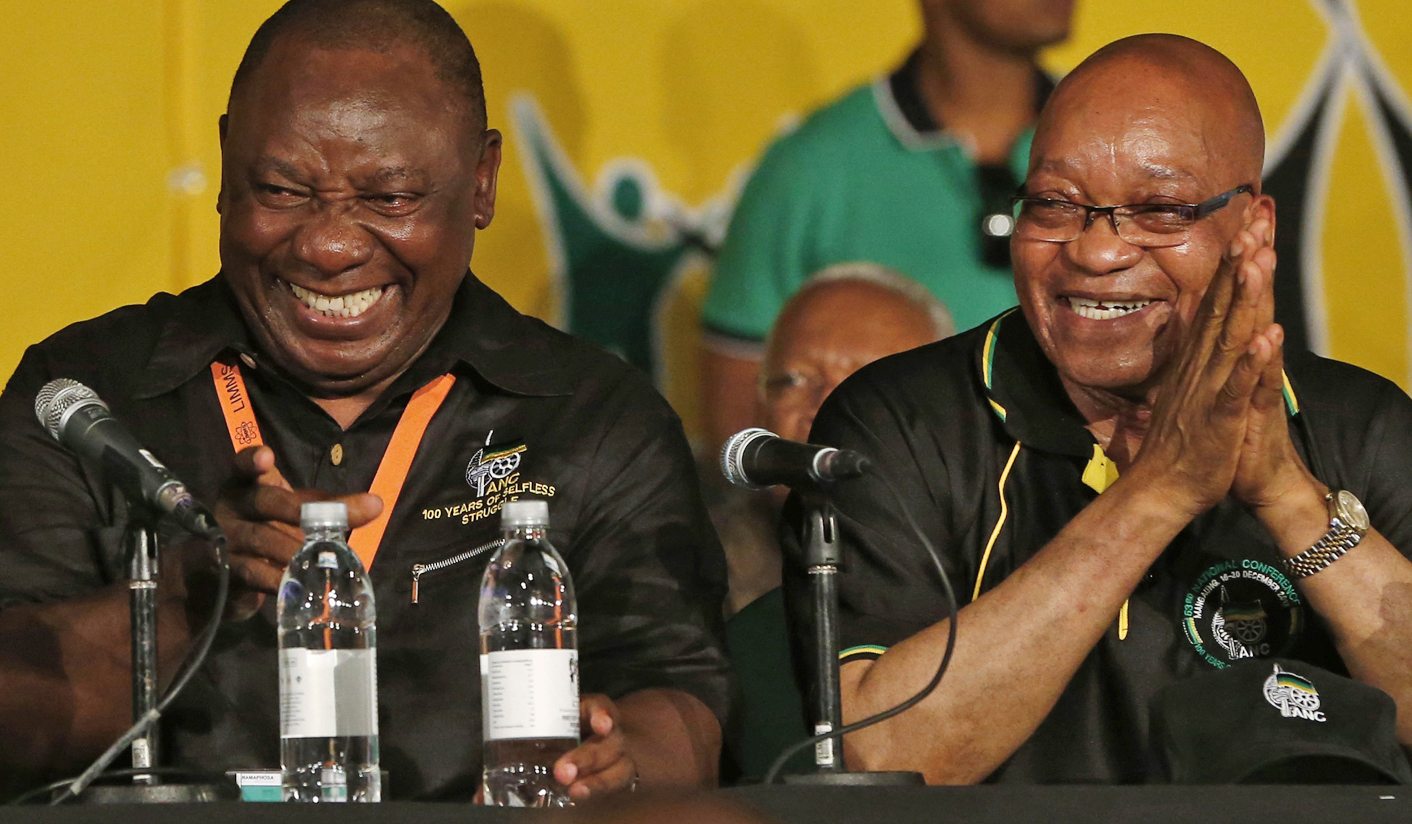 Monday’s official briefing on the Cabinet lekgotla announced that President Jacob Zuma would chair a new presidential state-owned entities (SOE) co-ordinating committee. Expected to be in place by year end, its structure will echo that of the Presidential Infrastructure Co-ordinating Commission which Zuma already chairs. This emerged amid the verbal candyfloss from Minister in the Presidency Jeff Radebe on the four-day government lekgotla which ended on Friday. This decision effectively means Zuma is taking over from his deputy Cyril Ramaphosa, who since December 2014 has chaired the SOE inter-ministerial committee. Is this yet another twist to Cabinet power plays which previously have seen stand-offs with National Treasury? By MARIANNE MERTEN.

Like infrastructure, SOEs have long been placed at the heart of government’s economic and transformative policies. But many are deeply troubled. SAA under chairwoman Dudu Myeni, who also chairs the Jacob Zuma Foundation, remains technically insolvent without a R5-billion government guarantee that National Treasury in these tough economic times is reluctant to hand over. Previous guarantees dating back years have not returned the national airline to financial health.

There are issues at Denel, embroiled in controversy over a joint venture with a company with links to the Gupta family and its associates. The Spanish locomotive scandal still hangs over the Passenger Rail Agency of South Africa (Prasa).

There are issues with power utility Eskom and its electricity tariffs. There are board and financial woes at the National Energy Corporation of South Africa (Necsa), which missed the deadline for submitting its annual report and financial statements last year.

There is PetroSA’s shaky balance sheet and the South African Post Office board and financial troubles, which like other SOEs came under scrutiny in Parliament last year. Never mind the shenanigans at the SABC.

The announcement of the new presidential SOE co-ordinating structure was contained in paragraph 6.5. on page five of the six-page official lekgotla statement. It would “provide President Zuma line of sight on strategic decisions and interventions to create (SOEs) that play a transformative role in a capable developmental state”.

Asked about Ramaphosa’s role, and what would happen to the existing inter-ministerial committee on SOEs, Radebe simply said: “There’s no question of a vote of no confidence in the deputy president.”

Dodging was the order of the day.

According to the Cabinet lekgotla official statement, government has identified a “set of Budget priorities” for the next financial year to focus on “maintaining infrastructure spend, strengthening support for skills development and maintaining real levels of spending on the poor”.

But whether that included a 0% hike in university fees for a second year following #FeesMustFall – and if it did, where the money would come from – was left unanswered aside from a reference to the commission of inquiry currently under way. “We did discuss the issues of higher education. Education is our apex of priorities… At an appropriate time we are sure that we shall know what is happening,” said Radebe.

There was reference to a “broadband war room” – Radebe said the successful roll-out could boost economic growth by 1.4% – and a commitment to finalise government’s information and communication technology (ICT) policy. But, as Business Day reported, the communications regulator Icasa and telecommunications department are facing off in court over the regulator’s sale of spectrum.

With regards to the 40 priority projects, Radebe listed R11-billion investment by the Industrial Development Corporation (IDC) at Port Elizabeth and R45-billion worth of investments in Limpopo and Mpumalanga by the Energy Department for the independent power producers (IPP) programme.

“When the Department of Trade and Industry distributes it (information on the 40 projects), you can have it and read it at your leisure,” he added.

Some of the projects included in the official statement, such as agroparks, have been on government’s official agenda for at least two years. Ditto the agreements with water boards and municipalities to stem wastage.

However, Radebe dismissed Eskom having ditched government’s official IPP programme by deciding not to sign any such new agreements as recently reported.

Questions remain over Energy Minister Tina Joemat-Pettersson’s repeated public statements, including in Parliament, that by 31 March 2016 South Africa would have its strategic partner for nuclear in place. National Treasury has been reluctant to open the purse strings, giving just R200-million towards preparatory work for nuclear procurement. And so Joemat-Pettersson’s “deadline” came and went quietly.

Meanwhile, the official long-term policy on South Africa’s electricity security and energy mix, the Integrated Resource Plan (IEP), remains six years out of date, according to the Energy Department website. But Radebe said the IEP, alongside the Integrated Energy Plan, would now be finalised by the end of the year “to provide certainty of electricity pricing and investment in generation capacity”.

There was a general lack of specificity in Monday’s briefing.

Instead, it was about the lekgotla being a “collective reflection” and providing “crucial lessons for a much nuanced and effective implementation” of the National Development Plan (NDP). There were “firm decisions… on concrete actionable plans”, a bid to “deepen implementation”, “accelerated implementation” and the “adoption of key high-impact projects… which aim to have a substantial positive impact on the economy through unlocking key levers”.

Perhaps such fluff is meant to hide Cabinet power plays. And any speculation these may go right to the heart of the ANC jockeying for positions come its 2017 national conference. The Cabinet lekgotla came halfway through Zuma’s second, and constitutionally his last, term as head of state. The ANC constitution does not limit terms. The full effect of Zuma taking charge of SOEs from Ramaphosa must, and will, play itself out.

All this will play out in tandem with cajoling within ANC ranks across regions, provinces and nationally. But it is made more complex by a local government election that saw the ANC lose outright control in four of the seven metros it used to control. As the ANC ministers met, DA mayors were elected in the administrative capital of Tshwane and in Nelson Mandela Bay, the Eastern Cape’s industrial heartland.

But the four-day Cabinet lekgotla also came amid domestic economic woes. The South African Reserve Bank in July forecast 0% growth and highlighted food inflation at 11%, or almost double the consumer price index. Joblessness remains persistently systemic at just over 26%, or one in three on the expanded definition including those who simply have given up.

Still looming is a possible ratings downgrade, which would push up the cost of borrowings and negatively affect the public purse. Although a downgrade was staved off earlier this year, analysts continue to cite as concerns domestic low economic growth, uncertainties around policy and commitment to implementation within set time frames, and deep socio-economic challenges such as unemployment and inequality.

Speaking for Cabinet, as he does, Radebe has a commanding platform not only to give a clear signal to citizens that their government is taking their issues seriously, but also to South Africa watchers on the global stage. Perhaps it is Radebe’s brief to say as little as possible. Perhaps it’s just how Cabinet likes doing it. Regardless, it’s a major disservice to just spin verbal candyfloss. DM