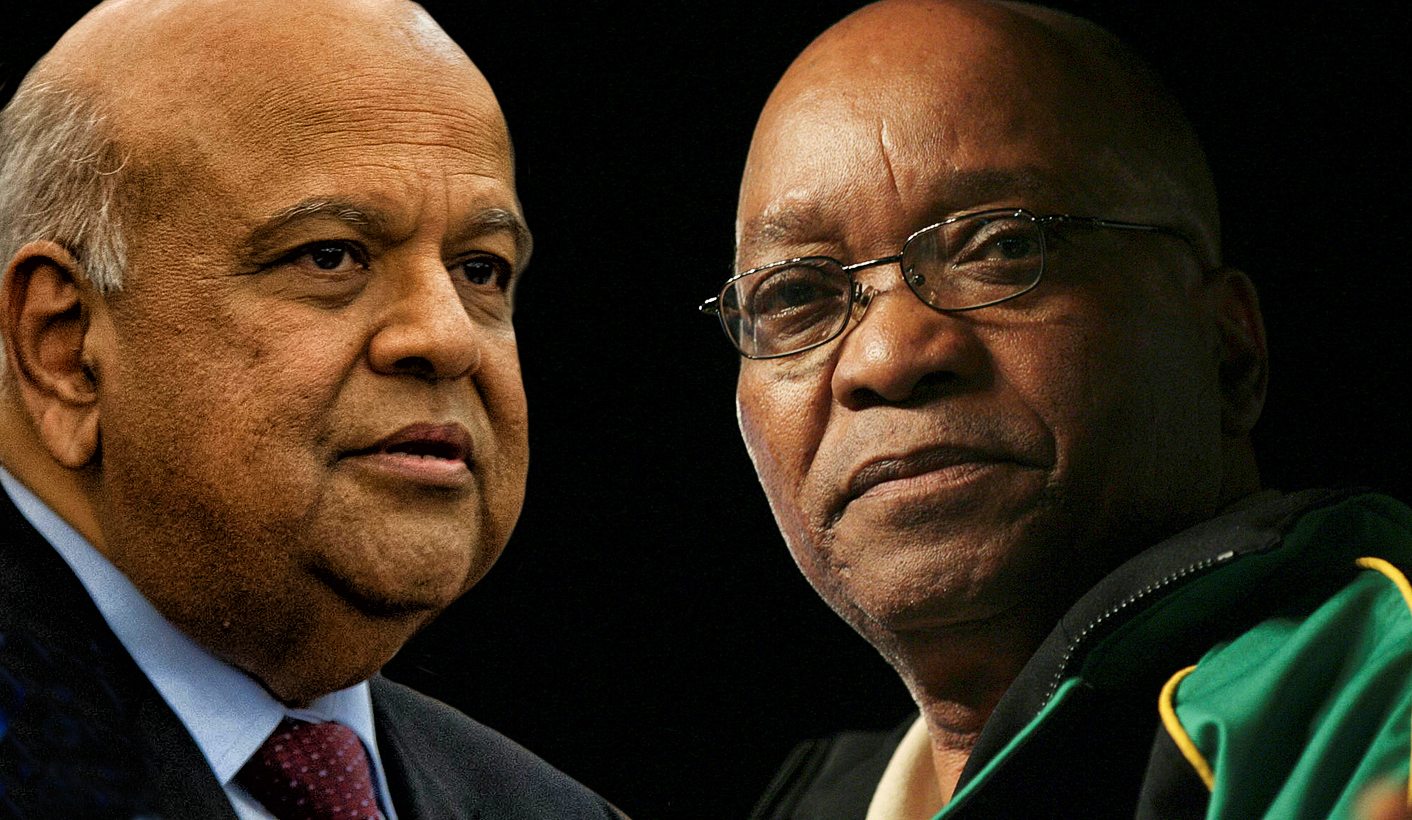 There were two key lines by ANC secretary-general Gwede Mantashe at the media briefing on Sunday night after a four-day national executive committee (NEC) meeting. The first was that the NEC “unanimously agreed to take collective responsibility for the poor performance of the ANC” in the elections. The second was that the ANC was “psychologically ready to be in the opposition benches” in municipalities. These were indicators of where the ANC stands on dealing with its Zuma problem and the state of coalition talks. But the more critical decisions were that the budget should be “reprioritised” and the principle of no-fee increases at universities should remain. Could the ANC resort to populist moves to rescue itself? By RANJENI MUNUSAMY.

The question hanging over the ANC NEC was what it would do with its “elephant in the room”: President Jacob Zuma. The president has been widely identified as the main contributor to negative perceptions of the ANC, including his poor leadership, his handling of the Nkandla matter, his violation of the Constitution, his firing of former finance minister Nhlanhla Nene, which resulted in billions of rand being flushed away, and his questionable relationship with the Gupta family. Would the NEC confront the president on these issues or would they talk awkwardly around them as they have done in the past?

From the NEC statement and Mantashe’s comments it was clear that the elephant was not only firmly ensconced in the room but probably still owns the room. It was highly unlikely that the NEC would have emerged with a decision to recall Zuma, considering that he is president of the ANC and the country and wields considerable power over both. However, there should at least have been an acknowledgement of the issues that Zuma mismanaged to indicate that the NEC had heard the concerns of voters.

Despite claiming to have conducted “a vigorous, honest, open and thorough assessment of the local government election outcomes”, the NEC seems to have made an effort to exonerate Zuma. “The NEC unanimously agreed to take collective responsibility for the poor performance of the ANC during the elections and resolved to take immediate and bold actions to address the weaknesses and shortcomings that led to the decline of our electoral support,” the NEC statement said.

Asked why the ANC was not prepared to listen to voters on the Zuma issue, Mantashe said there was no discussion on the president stepping down and the NEC was of the view that it could not blame one person for the decline. “Listening does not mean you stop thinking,” Mantashe said.

The NEC restated previous declarations to re-energise party structures, rid the organisation of factionalism and tackle corruption. It wants to “deal with perceptions of the ANC being arrogant, self serving, soft on corruption and increasingly distant from its social base”.

Among the measures to be taken to respond to the ANC’s poor performance at the polls, the NEC said it would investigate and act on all instances where there were violations and manipulation of the candidate selection process, including where the choice of communities was undermined. It is not clear how this would help the situation after the fact with the composition of councils already decided.

The NEC also resolved to “immediately embark on training of our councillors to ensure that they lead our municipalities in the interests of the people, provide services to the people and maintain high levels of revolutionary discipline and integrity”. It is interesting to note that these were not the criteria for choosing councillor candidates in the first place.

While the NEC mandated the top six ANC officials to lead the process of establishing co-operation with other parties, Mantashe said there was already a five-member team engaged in consultations with smaller opposition parties with a view to forming coalitions. It is curious that the NEC mandated the top six officials, which includes Zuma, to lead the talks, knowing full well that some parties stated that the removal of the president was a precondition for co-operation. It is perhaps a way of asserting Zuma as being central to the negotiations process and giving him a say on who the deals are made with.

With regard to the demands from opposition parties for Zuma to step down as a precondition for coalitions, Mantashe said there were some issues the ANC was willing to negotiate on and others they were not prepared to discuss. The party would not opt for coalitions to retain control of key municipalities “at all costs”.

“We are psychologically ready to be in the opposition benches,” Mantashe said, which is the most direct indicator that the ANC was gearing to surrender control of the major metros that are hung.

The NEC wants government deployees to report at its next meeting on the situation at state-owned companies, including South African Airways (SAA), the SABC and Eskom. The ANC said although these were local government elections, some national issues, like the turmoil at state-owned companies, “dominated public discourse”. The NEC said the government should “take urgent steps to bring stability and policy certainty” to these institutions.

However, Finance Minister Pravin Gordhan has been trying to rein in SAA and Eskom for some time but is clearly being impeded elsewhere in government. It is not clear whether this NEC decision strengthens his hand or whether SAA board chairwoman Dudu Myeni will remain under special protection.

With regard to the SABC, Communications Minister Faith Muthambi and COO Hlaudi Motsoeneng have been dismissive of the ANC’s criticism of the chaos at the broadcaster. The only way for the ANC’s resolution to be asserted is for the president and Cabinet to act against Muthambi and Motsoeneng. But like Myeni, they have so far been invincible.

Gordhan will have another headache trying to interpret the NEC decision that the budget should be “reprioritised”.

“The NEC resolved that to effectively deal with the triple challenges of unemployment, poverty and inequality, government in the coming Cabinet lekgotla must reprioritise the budget to give effect to the imperatives of the NDP (National Development Plan) and the nine-point plan (announced by Zuma in the 2015 State of the Nation Address to boost economic growth and create jobs) in particular as an instrument of implementation.”

Does this mean that the budget set out in February and the medium term budget would be restructured? What are the repercussions for fiscal consolidation? Mantashe was not very clear in his explanation but said that the NDP and nine-point plan were not out of the ordinary. But by linking this to the ANC’s electoral performance, it is possible that some in the ANC believe that Treasury is too tight-fisted and needs to allow more spending to pump up voter sentiment.

One clear indicator that the ANC wants to pacify agitated constituencies is the NEC decision that “the principle of no-fee increase in universities should remain in place”. Mantashe said the NEC wanted more consultation on what was viable and affordable before a decision on next year’s tuition fees was taken. But National Treasury told the commission appointed to investigate the feasibility of free higher education that there was no budget for zero fee increases next year.

Mantashe said the NEC had discussed the matter with the Treasury before taking the decision but had mandated that the matter be dealt with by the Cabinet. Ahead of a threatened shutdown of the country’s universities this week, Minister of Higher Education and Training Blade Nzimande said on Sunday night that government had not yet pronounced itself on 2017 universities fees.

The outcome of the elections has clearly rattled the ANC but rather than purging the rot from the organisation, the ANC appears to have resorted to PR exercises and populist quick fixes in the hope of winning back voters who turned away from the party. Rather than listening to the millions of people who spoke through the ballot, the ANC continues to expose its disconnect from true sentiment on the ground.

Perhaps the reality of the election results will only hit home when the ANC is relegated to the opposition benches and finds that major municipal budgets are now out of its control. For now, the ANC continues with what has become its primary function: saving and defending President Zuma. DM