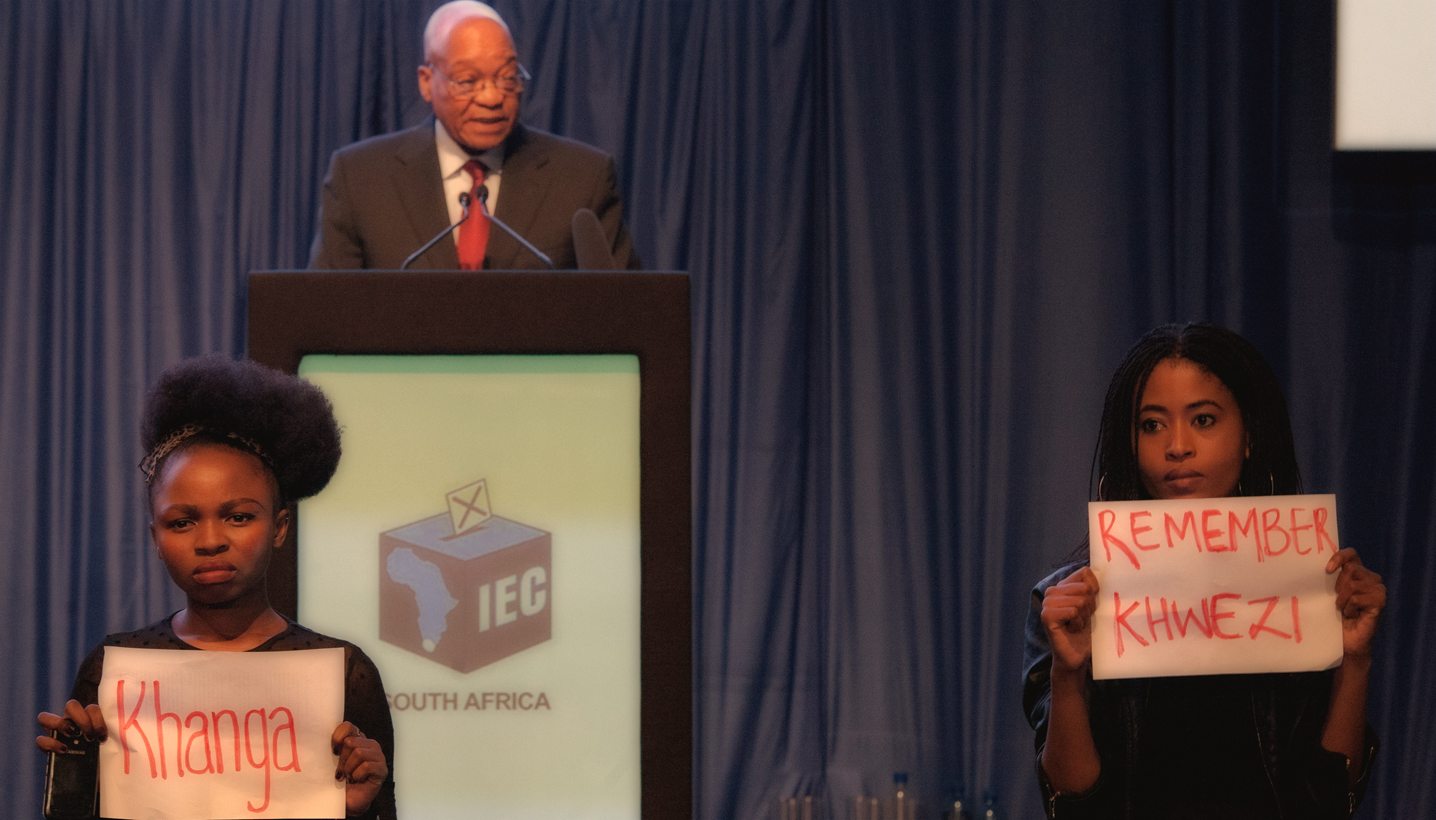 Through a peaceful protest on Saturday night, four women stole the show in what was meant to be a ceremony marking the end of the municipal elections. They confronted a president who has made a career of slipping away from scandals, and confronted a system that fails women. GREG NICOLSON spoke to two of the #RememberKhwezi protesters, who say it wasn’t about the EFF but mobilising black women to confront rape.

Simamkele Dlakavu was driving to the IEC’s national results centre with Tinyiko Shikwambane when she saw on Twitter that President Jacob Zuma would be making an address to mark the conclusion of the local government elections. “I don’t know how to feel about this,” she thought. She remembered the One in Nine Campaign’s recent demonstration outside the South Gauteng High Court, marking 10 years since Jacob Zuma was acquitted of rape and highlighting how the justice system fails rape survivors.

That demonstration garnered little attention. On Saturday night, the young women would hold another protest that couldn’t be ignored.

Dlakavu and Shikwambane decided they would disrupt Zuma’s speech, but how? They called Mpumi Mathabela from the One in Nine Campaign, which was initially formed to support Khwezi, the pseudonym given to the woman who accused Zuma of rape, and advocates for social justice for women. Mathabela supported the idea and suggested they recruit other women to hold a demonstration.

The pair got to the IEC centre in Pretoria and while staff were preparing the stage for the official ceremony, they spoke to other women, subtly gauging whether they might join the protest. “Do you remember the Zuma rape trial? Do you remember Khwezi?” they asked. They spoke to a range of women with varied political affiliations, but struggled to recruit them without giving too much away.

They called Naledi Chirwa, who was on her way to the event with Amanda Mavuso, and agreed that the four of them would stage a protest. They have been adamant that the demonstration was only planned in the hours before Zuma’s address and that it was a coincidence that they were all wearing dark clothes.

“It was an act of divine intervention,” said Dlakavu.

“It was the ancestors,” said Shikwambane.

The four women had experience in activism and protests such as #FeesMustFall and had seen the effectiveness of various demonstrations against rape, including protests against Bill Cosby, the #RUReferenceList and #RapeAtAzania. “This is another black feminist protest strategy, of silence,” said Dlakavu. They would pierce the silence around rape through a silent protest.

They went to the IEC information desk and asked for a koki pen. They got paper from the media desk. The four have varied academic backgrounds, including in African literature, law, and public administration and governance, but it was Chirwa, who is doing a master’s in drama and had more skill with the pen, who wrote on the five A4 pieces of paper.

Expecting to be manhandled, they left their bags with Sizwe Mpofu-Walsh, an EFF supporter and son of EFF National Chairman Dali Mpofu. Mpofu-Walsh didn’t have a clue what was going on, they said. Dlakavu has worked in the media and knew they could get close to the stage if they stood with the journalists at the front of the hall.

“We all sat there and our hearts were pounding,” she said. IEC chairman Glen Mashinini read the election results, province by province, metro by metro. President Zuma was welcomed to the podium.

“And then we walked to the stage and sat there,” said Dlakavu. “And then we just stood there.”

Facing the crowd, Dlakavu, Chirwa, Shikwambane and Mavuso held their signs in front of the president throughout his speech, which lasted over seven minutes. “We didn’t think that far,” said Dlakavu on what might happen to them. “We are women and no one’s going to ask us to leave nicely,” said Shikwambane. “I thought we were going to be removed during the speech but it had to happen.”

They tried to focus on friendly faces in the crowd. Dlakavu, who was shaking, was worried about rising to the occasion. People were watching; can they see the sign?

“Arms, behave and hold this thing right,” she told herself.

Shikwambane wondered if parts of her body were showing. Should she fix her dress, her cleavage – “all those micro things women think about”. Zuma’s speech was drowned under the intensity of the silent protest, but he had at least one listener, Shikwambane. The president said the elections had proved South Africa is a thriving democracy where differences of political opinion and diverse political preferences can flourish.

“Then I thought about laughing,” said Shikwambane. “Actually, he gave us legitimacy during his speech.”

“It worked like a beautiful theatre piece where everything worked together. The fear died once the cameras started flashing,” said Dlakavu.

Zuma returned to his seat and for the first time had an opportunity to see what the protest was about.

“Remember Khwezi,” said Dlakavu measuredly as the president’s security team herded him past the four women.

They were pushed over by the guards. Zuma sat, chuckled for a moment, and watched as the protesters were hounded behind a curtain by presidential security and taken to the restricted VIP entrance. A woman’s cry could be heard from behind the curtain as journalists were prevented from following the protesters. It came from Chirwa who fell as she was removed.

“Yoh, but that aggression was terrifying,” remembered Shikwambane.

“Just the presence of that many of them against four girls. I was like to them when they were violently putting us away, I said to them, ‘Don’t kill us,’ because they were so angry.”

The security officers were firing off questions: what are they doing, why are they protesting? An IEC official intervened and told security to let them go. “He was like, ‘Leave them alone. Stop it.’” They called Mpofu-Walsh and the EFF’s Vuyani Pambo who picked them up and took them away before the officers could change their minds. They drove to a garage and stopped to take a breath.

As the protest was occurring, ANC Ministers Lindiwe Zulu, Nomvula Mokonyane and Bathabile Dlamini attempted to have security remove the activists and reportedly argued with Defence Minister Nosiviwe Mapisa-Nqakula over the “security breach”.

ANC Secretary General Gwede Mantashe said the protest was a sign of the country’s healthy democracy while Dlamini claimed the EFF was responsible and was aiming to embarrass the president and South Africa.

“We categorically deny the EFF organised this or the EFF were aware of this,” said Dlakavu. “They heard of it in the aftermath,” added Shikwambane. The four protesters all support the EFF, but only Chirwa, who is an additional member of the party’s Students’ Command, holds an elected position. The protest was against patriarchy and rape culture and the suggestion that the EFF organised it undermines their agency as women, they said.

“We are flattered at how conspiring and how cunning everyone thought we could be.”

“It’s a cop-out for the ANC to do that, that’s political spin by doing that. You’re avoiding the issue,” said Dlakavu. The activists also hit back at criticism claiming it wasn’t appropriate to stage such a demonstration at the event.

“There’s never a right time to protest against rape. You can rape us anywhere… Why must there be a respectability politics? We had our own mission as black women. Please look at us as holistic individuals.”

Dlakavu and Shikwambane cited a list of demonstrations against rape and patriarchy they’ve been a part of in the past.

While the activists said the protest wasn’t orchestrated by the EFF, as supporters of the party they have been criticised over Julius Malema’s comments demonising Khwezi when he supported Zuma at his rape trial.

“Rape is not a political party issue. Patriarchy is not isolated to one party,” said Dlakavu, who is writing a master’s thesis on gender issues within the EFF. Malema’s comments promoted rape culture and were “in fact, vile”, she said. Malema, former Cosatu General Secretary Zwelinzima Vavi, and Sports Minister Fikile Mbalula need to apologise for their comments during the rape trial as a first step in addressing the pain and trauma inflicted on Khwezi, they said.

Zuma was acquitted of the rape charges, but Dlakavu and Shikwambane believe Khwezi was telling the truth. Dlakavu said she was too young 10 years ago to know what was happening in the case or how to support Khwezi, but hopes their protest has helped confront the silencing of black women.

“We got the conversation going,” she said, noting the increase in women who choose to share their stories of rape. Shikwambane hoped the protest will encourage women to bring matters affecting them into the corridors of power.

“We’re not trying to be heroes,” said Dlakavu. Nor are they trying to score a victory for the EFF. Repeatedly, they say it was about using black feminist theory to further mobilise women to confront a system that abuses and ignores them. DM

All photos of #RememberKhwezi protest by Greg Nicolson.