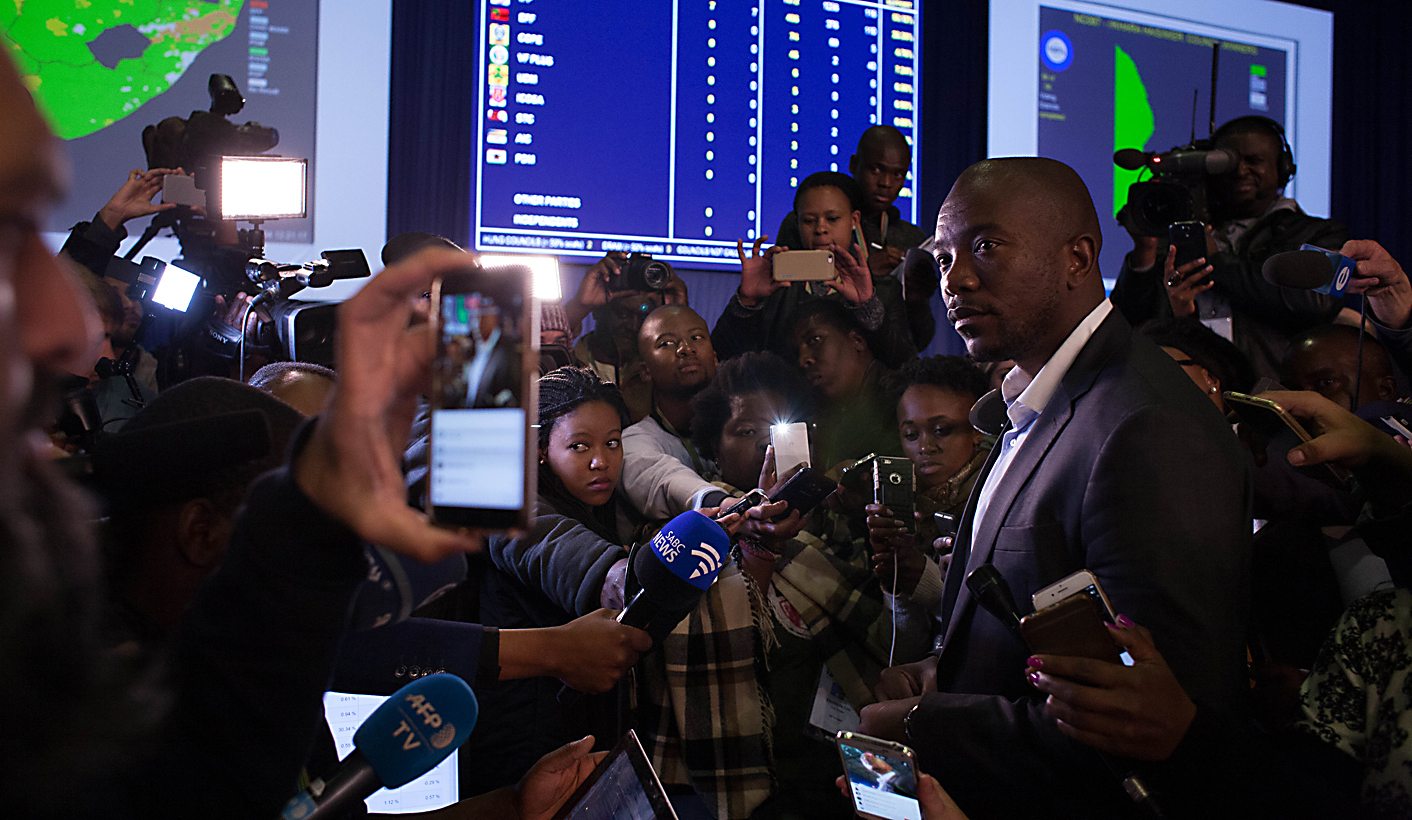 The votes have been counted and 77.8% had been captured by 11am today. Visiting the IEC results centre, DA leader Mmusi Maimane on Thursday was confident, claiming Nelson Mandela Bay will be a DA-run municipality. By GREG NICOLSON

Maimane was confident that by Thursday the DA will be able to form a government in Nelson Mandela Bay after voters went to the polls on Wednesday. “We’re just waiting for the final count,” he said after being flocked by media at the IEC results operations centre in Tshwane.

Nelson Mandela Bay has been one of the most contested metros in the run up to the local government elections and on Thursday both the ANC and DA claimed they would emerge as the leading party as the IEC continues to capture votes.

The ANC’s Stella Ndabeni-Abrahams told Eyewitness News the ANC has won 37 of 60 wards in the city. Maimane was sceptical. “I don’t know where they have come up with that,” he said. “You don’t just win on the basis of winning wards you’ve got to win the overall picture,” he continued, noting the importance of proportional representation seats.

The DA has increased its vote in Cape Town and Midvaal and taken Kouga, Eastern Cape, from the ANC, as well as Beaufort West and Agulhas municipalities in the Western Cape. “If you said to me as DA leader at the start of the election we would be here today are I’d be quite excited about it,” said Maimane. He also noted increases in DA votes in Mamelodi.

“This has been a very important election its been a very historic election and it shows that ultimately when you put an offer to the people of South Africa, about jobs about the delivery of basic services people will come out to vote. So preliminarily we’re feeling quite excited and very positive and buoyed by the results,” said the DA leader. Maimane said it’s too early to talk about coalitions and as yet the DA has not contested any of the results.

On Thursday IEC chief electoral officer Masuthu Moepya said all votes have been counted and 77.8% captured. “The Electoral Commission is aware that South Africa is now eagerly awaiting the outcome of these elections but we appeal for patience from all stakeholders to allow the process to follow due diligence and accuracy. In terms of Section 5(1)(n) of the Electoral Commission Act, the Commission must declare results within seven days after elections,” he said.

Moepya said reported disruptions at the Gauteng IEC results centre were related to large numbers of presiding officers delivering results and “frayed nerves” but had been resolved.  As it stands, the turnout for the vote was 58.29%, said Moepya, slightly more than 2011, but that figure could change as larger municipalities’ results are captured.

There has been one objection and three complaints, he said, but as yet no one has indicated they want to go to the Electoral Court. Results from eThekwini have been slow to come in and Moepya said two stations in the municipality were still counting votes earlier in the morning. “We’re not going to rush results and compromise the quality, but we want you to have them as soon as we’re satisfied,” said the chief electoral officer. DM