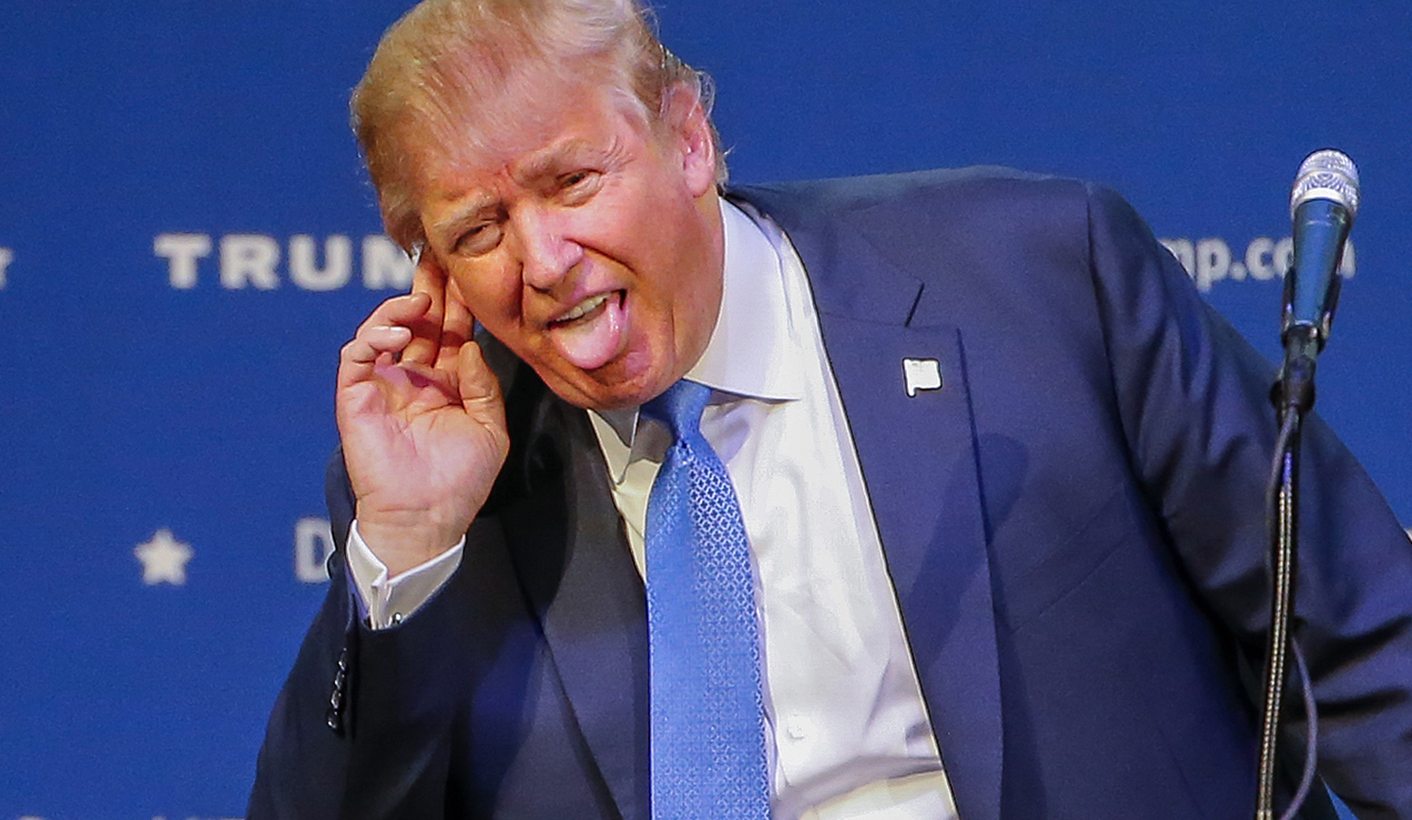 We are, if those phone calls from the DA haven’t made clear, in the middle of an election campaign. The ANC has been relatively slow to get going this time around, having had other problems to deal with, but things are now moving under a full head of steam. This means politicians are making promises. And you know they are lying, because, as the old joke goes, they are speaking. But international trends in politics are beginning to affect us, and the amount of rubbish spoken here, there, and everywhere, is rising. Politics in many places appears to be entering what some call a “post-truth” era. What does that mean for us? By STEPHEN GROOTES.

In the international arena two major political successes have started to bring attention to the idea that the truth simply doesn’t matter any more in politics. The first, shocking enough, was the rise of Donald Trump. He, and his hairstyle, are many things, but a truth-teller is not one of them. The Politifact website has found that 70% of his statements are either half true, mostly false, or false, with further 19% of statements that are so outrageous that they earned the “pants on fire” . That doesn’t leave much room for truth. In fact, only 3% of his statements are considered properly “true”.

That a liar has risen is not unusual – human history, including our own, is full of examples. What’s different here is that his comments have been debunked so quickly, and so comprehensively, but to no discernible effect. It’s almost as though voters are supporting him because he is lying.

We could put the vagaries of US politics to one side if we wanted to; after all, this is the same country that voted George W. Bush into power. But the UK has a long, and often honourable history of there being consequences for lying. If you are found out to have lied, you are punished. Sometimes it’s the end of your public life, sometimes you have to go and sit in the back benches for a few years, before you are seen as rehabilitated.

But the recent Brexit vote has changed all of that. This is a campaign that claimed, on its campaign bus no less, that a vote to leave the EU would mean that country’s National Health Service would get more money, immigration would be checked, and life would be better. In the end, as the British Independent put it, “Promises on NHS spending will not be met, EU immigration may not be controlled and leaving the EU could take several years, are among a series of claims made by leading Brexit campaigners in the hours following the nation’s shock decision to leave the EU.” It went on to quote a leading Brexiteer, Liam Fox, as saying, “A lot of things were said in advance of this referendum that we might want to think about again.”

This was a campaign that saw one cabinet minister actually suggesting that “people in this country have actually had enough of experts”. And if you don’t believe us, perhaps you’ll believe the Financial Times.

So then, if this is the case in other countries, what about us?

The truth is, we have been lied to many times. One person has suggested that a certain party will “rule until Jesus comes”. Taken at face value, that is surely a lie. Taken metaphorically, that is surely a lie, it is simply too sweeping a statement. And don’t forget that what is being said to us today by everyone pales into insignificance considering the complete and utter fabrications we were fed before 1990.

At the moment some parties are making promises that simply cannot be true. The Economic Freedom Fighters (EFF) are claiming that their councillors will be available 24 hours a day. A hard ask, considering that surely they will be busy helping one resident when another calls them. They’re also promising “spacious houses”, but don’t say where, and to create a tariff barrier around Joburg, but don’t say how (Really, that is what Floyd Shivambu said at The Gathering, go and look and, if you must, you can look at his justification for it and why this writer is guilty of “lazy thinking”.

The ANC is a little better. It knows better than to make such big promises. But it is claiming to be able to make the economy move, and has promised jobs in the past, a promise that was not fulfilled. This time around it promises to transform cities and towns. It’s made that promise before too. It also says that “local government is in your hands” – a comment that was not repeated by ANC leaders speaking to communities in Tshwane during the recent protests. As the party in power, it faces a slight dilemma. It can promise the earth, but if it does that, it may have to face the music because it will be returned to power, and then not fulfill those promises. There is, presumably, a limit to how much of this voters will take. Maybe.

The DA is in a slightly different situation. It has to try to do several things all at once. Its mainly middle-class constituency likes people to avoid breaking the rules. They also have more access to information, which could mean it’s harder to lie and get away with it. That doesn’t necessarily mean it doesn’t push though. This writer, and surely others, has received several phone calls during this campaign that feature a recording of a voice explaining what “Julius Malema” said about using violence in an Al Jazeera interview. The aim of this tactic is surely to convince people not to vote for Malema. While there is a small possibility that these calls are from the ANC, that seems unlikely. And not explaining who is calling is a dirty tactic anyway.

To go through all of the previous and current promises of all of the parties to determine where they would fall on the Truth-ometer is a bigger job than any media newsroom can handle at the moment. And we should wait until after the elections to see who lied the most – trust us, there are plenty more of lies to come.

But it is important to ponder the impact this lying could have.

If people feel that one politician lies and gets away with it, they may feel a push to vote for another person who does not lie. But they might also feel that the whole system is rotten, especially if other people, from more than one party, lie and escape any consequences. This breeds two things: apathy, a feeling of “A plague on all their houses”, and cynicism, the feeling that they’re all as bad as each other.

This in turn means that even when people speak the truth, it can be hard to know they’re speaking the truth. This dynamic is made worse in an environment where people who do lie have the resources, the money and the lawyers, to try to twist the truth. It’s only because Nkosinathi Nhleko is so bad at lying that the bald-faced attempt to convince us a swimming pool was a fire-pool didn’t work. Now we have the ANC claiming, with a straight face that President Jacob Zuma always wanted to pay back the money over Nkandla. It is said over and over again. We know it is not true, but the lie has been repeated so often that many people will believe it.

And of course, a lie travels so quickly nowadays that it can be almost impossible to make sure the truth does ever reach all the people who’ve been lied to.

One of the upshots of this must surely be that people are then forced to ignore some of the claims made in campaigns, and even the campaigns themselves. They fall back on the oldest reason there is for voting – they vote for the people most like themselves. The words that are spoken don’t matter, your identity, and that of the candidates, matters. There is a reason why the ANC is bringing out its colours, music, and even dance step, right now. It’s because the campaign becomes about identity. And it works. As it does in different ways in most other places around the world.

Lying, as every parent tells their child, is wrong. There are negative consequences for everyone when people and politicians lie. But they are not going to stop doing it. And it is a sad fact of life that we simply have to get used to it. DM