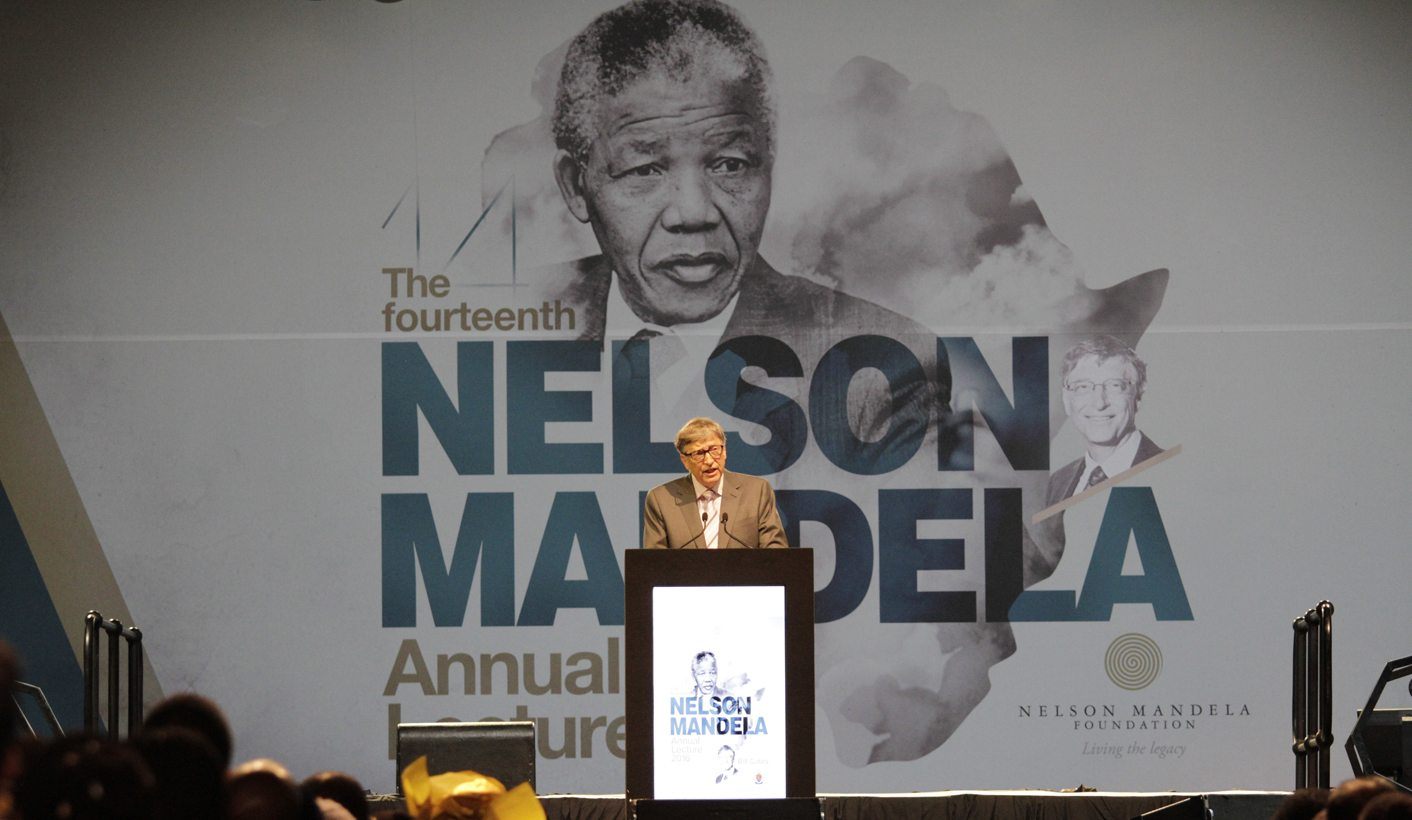 Delivering the 14th Annual Nelson Mandela Lecture in Mamelodi on Sunday, Bill Gates said Africa has seen development successes, but must invest in young people to build the future. The billionaire philanthropist and Microsoft co-founder stuck to practical issues, not speaking to the challenges posed to the system of foreign aid addressed in last year’s lecture. By GREG NICOLSON.

Listing the successes and challenges in achieving the sustainable development goals on the continent, Bill Gates said Africa needs to achieve more, faster, and ensure everybody benefits as people tackle unemployment, malnutrition, and health issues. To achieve this, he emphasised the role of young people in finding new solutions.

“We are the human beings who must take action, and we have to decide now, because this unique moment won’t last forever. We must clear away the obstacles that are standing in young people’s way so they can seize all of their potential,” said Gates, speaking at the University of Pretoria’s Mamelodi campus.

He quoted Mandela on the youth’s potential, and added, “But our duty is not merely to arouse; our duty is to invest in young people, to put in place the basic building blocks so that they can build the future. And our duty is to do it now, because the innovations of tomorrow depend on the opportunities available to children today.”

The theme for Gates’ lecture was “living together”. He is co-chair of the Bill and Melinda Gates Foundation and co-founder of Microsoft, with a net worth of almost $80-billion, according to Forbes. The Bill and Melinda Gates Foundation is the world’s largest philanthropic organisation, aiming to improve life for billions of people across the world, and has given tens of billions of dollars in grants, largely to tackle hunger, health, and education challenges.

Gates said Mandela was an “advisor and inspiration” while he was working on Aids issues on the continent. He began his foundation after seeing poverty in parts of Africa and said he learnt about the structural challenges needing to be tackled while at a community centre in Soweto which was running on a generator. “Computers alone can’t cure disease or feed children and if they can’t be turned on they can’t do much at all,” Gates said on Sunday.

His address touched on efforts to improve education, health, economic, and governance issues, often noting the ingenuity of young people and the need to build on recent gains. He pointed out different initiatives to tackle these challenges, and while emphasising some of the complexities, encouraging all stakeholders to commit to change and develop innovative solutions. “What can South Africa be, what can Africa be, what can the world be – and what must we do to make it that way?” he asked.

“It won’t be easy, but I believe it can be done. The successes and failures of the past 15 years have generated exemplars and lessons that we can learn from. Phenomenal advances in science and technology are constantly expanding the range of solutions available to solve development challenges. And then there is the ingenuity of the African people.”

Gates was chosen for the annual lecture after French economist Thomas Piketty delivered the address in 2015 and was critical of the Microsoft founder. Piketty said stakeholders in Europe and America suffered from “historical amnesia” and were hypocritically preaching about good governance while not following their own advice on the continent.

On Sunday, Gates said, “African countries tend to have higher rates of inequality than countries on other continents. And despite healthy average GDP growth in the region, many countries have not shared in it. Gross inequalities exist both within countries and between countries. Until progress belongs to all people, everywhere, the real promise of living together will remain elusive.” He didn’t mention his views on calls to back stronger international regulations to prevent illicit financial flows, which has been a key topic recently.

The lecture was to those who lost their lives in the fight against apartheid and some relatives of killed anti-apartheid fighters were in the audience. Before the lecture, chairman of the board of the Nelson Mandela Foundation Professor Njabulo Ndebele noted the current challenges of inequality and questions about the disparity between the sacrifice and the fulfilment of a dream for the country. “Sometimes you can feel lost and even discarded. Then we ask how can we live together in dignity in the face of this gap?” he asked. “The dream of inclusion is swallowed up by the reality of exclusion.”

Gates emphasised the role of African youth, who he said believe in themselves, helping their families achieve more prosperity, and working to improve the future of the countries and continent. DM

Photo: US businessman and philanthropist, Bill Gates, speaks during the 14th annual Nelson Mandela Lecture, held at the University of Pretoria, Mamelodi Campus, South Africa, 17 July 2016. US businessman and philanthropist Bill Gates and his wife Melinda co-chair the Gates Foundation looking to combat infectious diseases, ensure more children survive and thrive and empower the poor, especially women and girls. Gates is the 14th speaker of the prestigious Nelson Mandela Lecture that this year is delivered the day before what would have been the late former South African President’s birthday. EPA/CORNELL TUKIRI