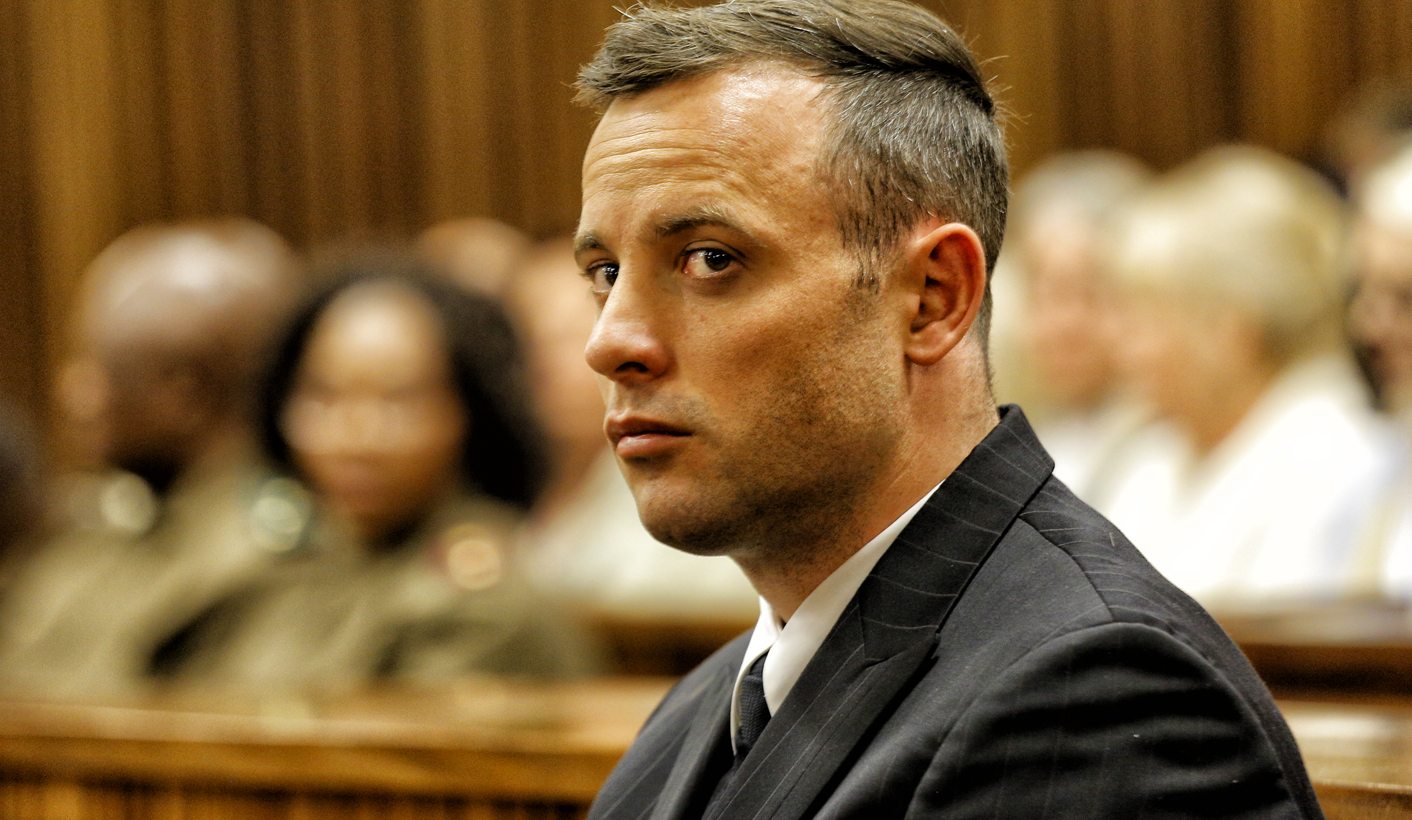 High Court Judge Thokozile Masipa delivered a much-needed reality check on the continued triumph of exceptionalism and white privilege in our society. The laughable six-year sentence she handed down to convicted murderer Oscar Pistorius was a reminder of how inequality penetrates and impairs every aspect of our lives. Why should the showcase trial of South Africa’s former Olympic star be any different? Judge Masipa validated his bullshit version of events and his feigned remorse and told us that the “fallen hero” shouldn’t suffer because of our “unjustified outrage” at Reeva Steenkamp’s murder. So thank you My Lady for that “zombie stopper” shot in the head. By RANJENI MUNUSAMY.

When facing the prospect of a 15-year term of imprisonment for murder, there are few people who would opt to tell their sorry life story in an extensive interview with an international television station. Then again, most of us do not lead such exceptional lives that our worst behaviour gets to be examined and showcased around the world for months on end, and then have the privilege to howl about it on television later.

Oscar Pistorius fired four high-calibre bullets into Reeva Steenkamp and then felt sorry for himself for being burdened with the process of justice that held him accountable for killing her. An even greater inconvenience was being sentenced again, for murder instead of the initial culpable homicide conviction, after a ridiculous one-year incarceration before he was paroled. Judge Thokozile Masipa, responsible for handing down the first farcical five-year jail term for culpable homicide, got a second opportunity to massage Pistorius’s privilege, deciding there were “substantial and compelling circumstances” that allowed her to deviate from the prescribed 15-year minimum sentence for murder.

“It’s not as soft as brains but fuck it’s a zombie stopper.”

What kind of person says things like that? Who lives like that? Certainly not the rest of us in society who have to be concerned about the interests of justice and minimum sentences.

In Pistorius’s charmed life, defined by exceptionalism, the justice system should have bowed to him and trundled off to hold less mortals accountable for their actions. Not the star athlete who overcame his disability to win gold medals for our country. Not the humanitarian who motivated others with disabilities to aspire to greater heights. Not the fragile victim of our crime-ridden society who became so paranoid that one of us might want to climb into his privileged sanctum that he was forced to shoot four bullets to kill someone.

No, not our Oscar. We simply cannot have him shut away when he could be helping the “less fortunate” among us.

This is what he told ITV in an in-depth interview in which he again indulged in his soppy, illogical version of what happened the night he killed Steenkamp. He even added new details to spice things up. Apparently Steenkamp had been pestering him to brush his teeth. “When I came in the room I placed my firearm on the left-hand side under the bed. And then she said ‘Come on, let’s go and brush our teeth’ and I didn’t get up immediately. She called from the bathroom and she’s like ‘Come baba, you have to brush your teeth’.”

This was not even the most nauseating part of the interview, in which Pistorius periodically sobbed and howled as he did in court during his testimony. It was so obviously contrived to evoke public sympathy, as was a picture his brother Carl posted on Twitter of the convicted murderer asleep on a couch with little kids propped up against him. The desired reaction is for the public to cluck in sympathy and decide that Pistorius is a good human being who has suffered too much to return to jail.

Of course nobody in their right mind would volunteer to go back to prison. But Pistorius made out as if his reason for not wanting to return to jail was for the sake of the rest of society, not because of his obvious sense of privilege. He wants to help us, apparently, and believes that Steenkamp would not want him to serve time for robbing her of her life.

“I don’t want to go back to jail. I don’t want to have to waste my life sitting there. If I was afforded the opportunity of redemption, I would like to help the less fortunate like I had in my past,” he said. “I would like to believe that if Reeva could look down upon me that she would want me to live that life.”

The “less fortunate” have no say in this and neither does Steenkamp. Her family, who suffered unimaginable trauma and grief, have also been left without justice for her murder. Masipa’s primary concern in her sentencing judgment was the “broken man” in the dock. “The life of the accused will never be the same… He is a fallen hero who has lost his career and been ruined financially. He cannot be at peace,” she said.

Masipa said the continuing misperception that Pistorius had intentionally killed Steenkamp was something the court had a duty to correct to “prevent unjustified outrage from the public”.

“Unjustified?” Really? What IS the appropriate response to murder, My Lady?

Yes, the prosecution could not produce evidence to prove conclusively that there had been an argument between Pistorius and Steenkamp that night, other than to bring witnesses who said they heard people fighting and Steenkamp’s “blood curling” screams. Masipa chose to disregard the testimony of the neighbours and to believe Pistorius’s absurd version, even though she found him to be a “poor and contradictory” witness.

Masipa said there was “not a shred of evidence” placed before the court that supports the perception that Pistorius had tried to directly kill Steenkamp. “Our courts are courts of law, not of public opinion.”

This was also not a case of gender violence, Masipa said. Evidence had been led in the trial showing Pistorius to be an argumentative, self-indulgent, rude, ill-tempered, jealous and spoilt man who fires guns in the air and believes women are his possessions. Masipa is perhaps a truly magnanimous human being for still believing he was incapable of being abusive.

This feeds into the false characterisation of the archetypal abuser as a drunken black man beating up his partner in a shack. A spoilt white boy living in a security estate with all the trappings of privilege cannot fit the description. It is these incorrect and infuriating perceptions that make despicable people like Christopher Panayiotou believe that their white privilege excuses them from sitting in jail while awaiting trial for the murder of their partners. It also makes people like Shrien Dewani think that ours is a country where you can pay a black man to kill your wife for a small fee and society will swallow the bullshit story.

Sorry. We don’t buy any of their ridiculous stories.

Masipa is convinced there was no argument; it does not mean the rest of us will. We also did not fall for Pistorius’s whimpering as evidence of “genuine remorse”, which Masipa found to be a mitigating factor for a light sentence.

The Supreme Court of Appeal (SCA) had overturned Masipa’s judgment in the trial and found that she had erred in her conclusions about whether Pistorius had intention to kill and by not taking into account essential evidence. The SCA found Pistorius guilty of murder and sent him back to Masipa for sentencing.

You would think that the critical judgment of five SCA judges would have made Masipa more cautious about again being too lenient towards Pistorius. He was not even trusted to testify in mitigation of sentence, except to parade for her on his stumps, to show how feeble the former Olympic champion is. She fell for it, again, deciding that as a double amputee, Pistorius had felt vulnerable when he believed an intruder was in his home. Ignoring Pistorius’s disability as a mitigating factor would be “an injustice”, she said.

“Although a custodial sentence is the proper sentence‚ I am of the view that a long term of imprisonment will not serve justice in this matter. The accused has already served a sentence of 12 months imprisonment‚ he is a first offender‚ and considering the facts of the matter‚ he is unlikely to reoffend,” Masipa said.

What does “reoffend” is how Pistorius’s privilege allows him to get away with murder. Again. The change in conviction from culpable homicide to murder got only one year added to his already light sentence. His legal team is not appealing as they know that six years is the most lenient sentence he could possibly get for murder – and unlikely for most other citizens, particular those who are black and poor.

The Pistorius case was sickening from the very beginning and this sentence, if left unchallenged, sets a dangerous precedent for exceptionalism. As he starts his new jail term, we are reminded how even the justice system can be a spoilt white boy’s bitch. DM