Endgame for Teflon man: Why bailing out Zuma is a risky business 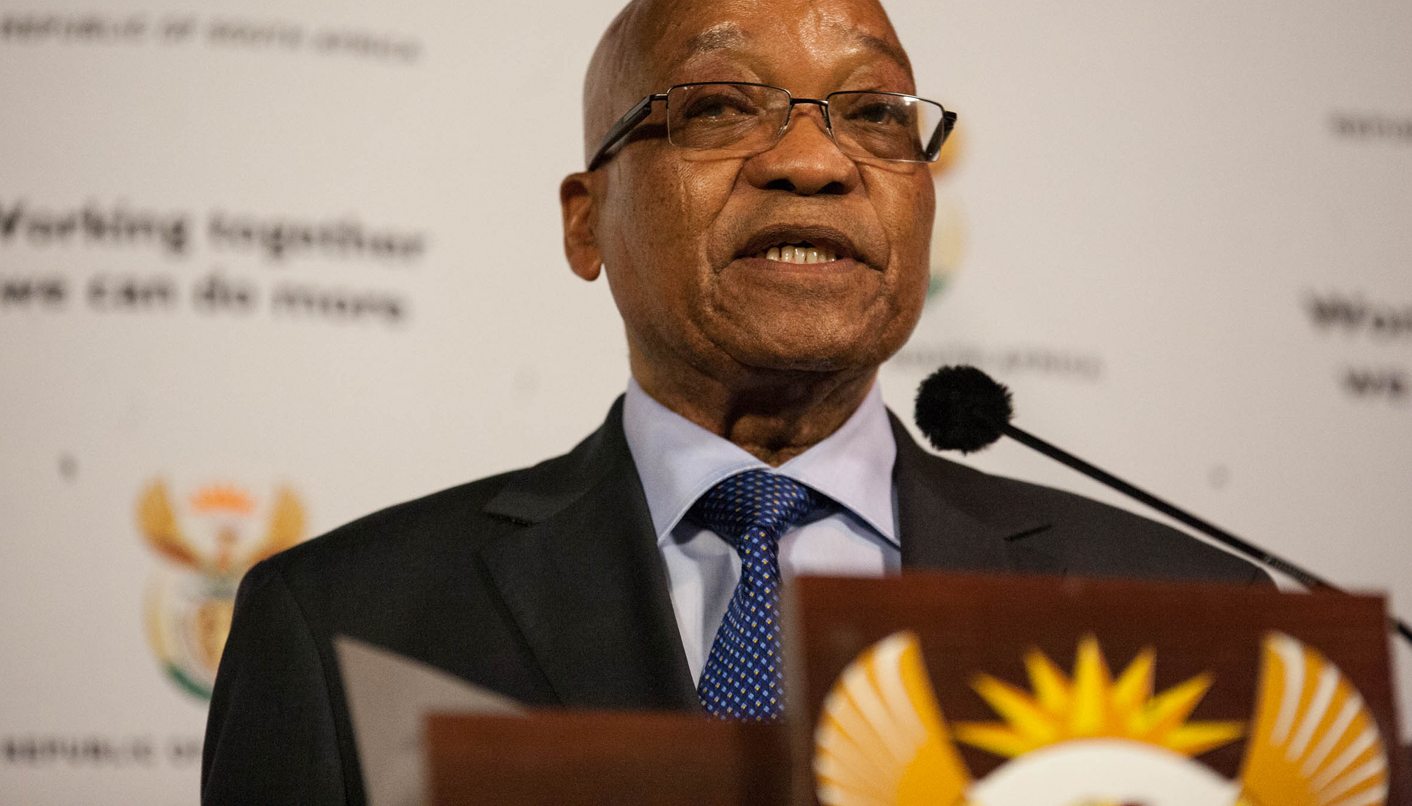 After years of living off his friends, his family, the state and his benefactors, President Jacob Zuma is now in a financial fix. With Zuma committing to compensate the state for the non-security upgrades at his Nkandla home, he now has to come up with R7.8-million by 24 August. While in the past Zuma’s friends have stepped in to pay his children’s school fees, his clothing bills, his legal fees and even leased his house on his behalf, the well of goodwill now seems to be drying up. With an end in sight to his political career and criminal charges hovering over him again, Zuma is becoming a deadweight. By RANJENI MUNUSAMY.

According to the Sunday Times, members of the Zuma family claim they are “not a rich family” and are concerned about how the president will settle the hefty bill for non-security features at his Nkandla home. Three members of the Zuma family, all interviewed by the paper separately, had the same line: they are not well off and not in the position to assist the president to pay the debt.

Michael Zuma told the paper that the Zuma family lived the life of any rural family. Edward Zuma is quoted as saying: “We are not a rich family, perhaps if we were rich we would also be fighting these things and taking people to court. We are a family of hustlers and hard workers.”

A spokesman for Khulubuse Zuma said: “Khula will not be in a [financial] position to personally assist him.” The family reportedly held a meeting on Sunday to discuss the matter.

The comments by Zuma’s brother Michael, his son Edward and nephew Khulubuse (through a spokesman) are a departure from what the president himself has said several times, that his family was able to raise the capital and pay for the upgrades to his home.

When opposition parties, particularly the Economic Freedom Fighters, demanded that Zuma comply with the Public Protector’s report on Nkandla and “pay back the money”, several people made public statements saying they would step in to assist the president should he need to reimburse the state. However, since the Treasury set the amount to be paid back at R7.8-million, would-be benefactors have not been as forthcoming as they were previously.

It could be that some of them never actually thought that the day would come when Zuma would have to comply with the Public Protector’s report and reimburse the state. Some might have thought that a “reasonable percentage” of the non-security upgrades might be far less that R7.8-million. There might have also been some swagger involved in the offers that evaporated when reality dawned.

The Constitutional Court order that Zuma “must personally pay the amount” has also created confusion about whether the president can be assisted to pay the debt. Legal interpretation of the order is that neither the state nor any organisation can settle the debt on Zuma’s behalf. However, the president can receive donations as long as these are declared and he pays tax on the amounts received. The Presidency said in a statement last week that no request had been made for members of the public to contribute towards the settlement of the debt.

Zuma has the option of applying for a loan through a bank but it is not clear what he would offer as collateral. In response to questions in Parliament in May about what collateral he offered to secure his previous loan, which he claims he is still paying off, Zuma said he had a “Permission to Occupy” document. But this raised further questions about whether a bond could be secured with a document that simply gives a person the right to occupy communal land.

ANC secretary-general Gwede Mantashe told the Sunday Times the ANC had no plans to collect money for the president. “The Concourt is quite clear, the ANC cannot pay whatever amount. A structure of the ANC cannot do that because if it’s traced and found to be that, it will be in contempt of court,” Mantashe said.

However, the ANC in Mpumalanga, one of the strongholds of the “premier league” faction, said they were still prepared to help Zuma if he requested their assistance. Mpumalanga ANC secretary Mandla Ndlovu told City Press that the offer made by the premier, David Mabuza, to help Zuma pay back the money was still on the table. “Our offer was conditional. If he requests [help], we will see how we can help him. There has been no formal request from the president and, therefore, there is no plan from us,” Ndlovu said.

But the rallying of support for Zuma that was evident 10 years ago after he was fired and struggling to pay his legal bills and maintain his lifestyle is no longer evident. As president of the country, Zuma earns a salary of R2.8-million and can no longer be seen as a political victim who has fallen on hard times with a rather large family to support. Most members of the Zuma family have excelled in the business world since then, with shares and directorships in several companies.

Ten years ago, Zuma was also “the coming man”. The rallying of support around him when he was fired gained momentum and mutated into his presidential campaign. It was expedient for people to invest in Zuma and his political career as the association with him paid off when they piggybacked on his path to power.

But now… the situation is different.

People are circumspect about bailing out the president again as he will in all likelihood no longer be ANC president from December 2017. When a new ANC leader is elected, power will shift from Zuma to his successor. Even if the successor is an ally or handpicked by Zuma, it does not make sense to bank on an outgoing leader. Zuma will still be president of the country until 2019, but power will progressively tilt towards the new leader.

The biggest turn-off, however, is the possibility of Zuma going on trial for corruption. Until a few months ago, this did not seem to be a real prospect, but the high court judgment in the spy tapes matter changed that. Zuma has been on a losing streak in the courts and there is no telling how long he and the National Prosecuting Authority can avoid the reinstatement of corruption charges.

When Zuma faced corruption charges over a decade ago, he clearly still had life in his political career. Now that he has made it to the top of the food chain and his retirement is beckoning, his benefactors will think twice about bailing him out, particularly when the charges he might face have to do with accepting money in exchange for political favours.

Zuma’s family seem to be taking seriously the prospect of him facing trial and fear the possibility of him going to jail again. Zuma spent 10 years on Robben Island during the struggle against apartheid.

“We are afraid he could go back to jail. This issue has made me lose sleep and I have sleepless nights. His wives are the most concerned and vulnerable. They constantly ask me for direction and as the eldest [at home] I always have to go out of my way to assure them.”

It cannot only be Zuma’s family that have this concern. People who have previously been generous to assist the president with the upkeep of his family and his lifestyle would be understandably concerned about financing someone who could face another long messy trial and possibly jail time. This could also mean more legal bills after Zuma has left the presidency, which means the R7.8-million will not be the end of his financial woes.

Of course, Zuma is not yet a lame duck and still has significant support in the ANC, and political clout. It makes sense to stay on the right side of him politically but it does not make sense to pour money into a black hole with no hope of dividends.

The president himself has not spoken on the matter so it is possible that he has already made arrangements to settle his debt without his family’s knowledge. It is also possible that some of his friends, such as the politically connected family that has relocated to Dubai, might not care how much trouble he is in or that the end of his political career is nearing. He could still be useful to them before his retirement or make sure that his successor services the debt.

Let’s not forget that Zuma has survived a lifetime of struggles, battles with the law and financial difficulties. He has an inordinate ability to survive and there is no indication that his Nkandla bill will break him. But paying back the money was a dilemma he tried every means possible to avoid. It could be that the Teflon man’s luck is finally running out. DM